Afraid to Wear a Jewish Symbol in Public? That's Exactly Why You Should. – Kveller
Skip to Content Skip to Footer

Afraid to Wear a Jewish Symbol in Public? That’s Exactly Why You Should. 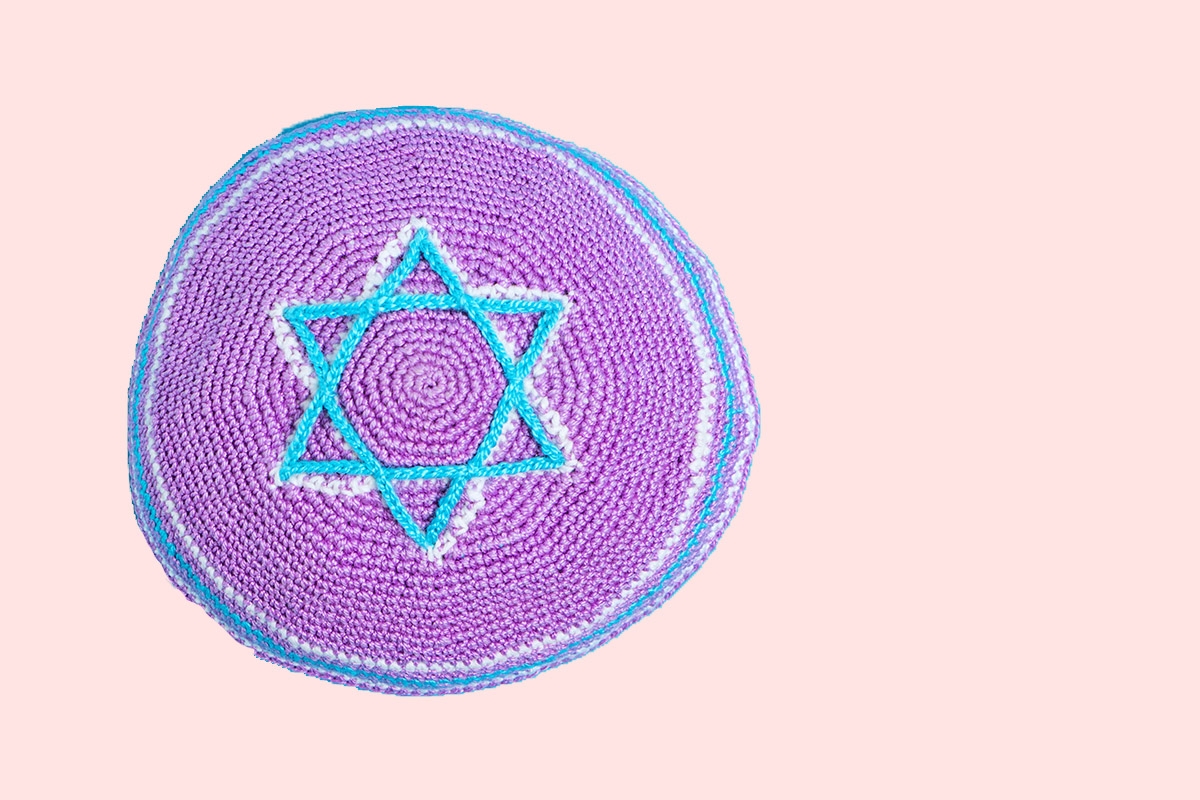 A few months ago, when two of my kids and I boarded the London Underground, all eyes seemed to rest on us. My son’s small black kippah, which he always wears, seemed to be drawing dozens of staring faces — and also a few glares and frowns. It was an uncomfortable moment.

“Maybe you should take off your kippah,” my daughter, 15, whispered to her brother, 17.

“No!” he whispered back. “The day I’m afraid to wear my kippah in public is the day I wear it for that reason!”

Wearing a kippah is a traditional symbol of piety, signifying that we’re always aware of God’s presence above us. It’s also seen as a Jewish mode of dress: no Jewish boy or man is seen as fully dressed in Jewish tradition without something covering his head. Yet in that moment, when my son thought of his kippah as a political statement, my heart swelled with pride. Would I be so brave, I wondered, to stand up publicly and show my Jewishness?

Across the globe, a recent surge of anti-Semitism is forcing each of us to ask that question of ourselves. After all, taking a public stand by showing off our Jewishness comes with risks. Jewish law is clear: no one should court physical harm by wearing a kippah or other Jewish symbols. (The Jewish principle of pikuach nefesh dictates that safety comes first; traditions can be discarded if they put our lives in danger.) Yet, at the same time, erasing all external symbols of our Jewishness due to fear feels profoundly wrong — if we allow anti-Semites to cow us into hiding our Jewishness, they will have won, wresting something precious away from us. Where in all this is the middle ground?

Incredibly, there are non-Jews out there who are donning kippahs and standing in solidarity with Jewish minorities. On Monday, May 27, 2019, Bild, Germany’s largest-circulating newspaper, published a paper kippah on its front page, designed to be cut out and worn. The newspaper included instructions and even links to an online video showing how to turn their paper cutout kippah into a realistic-looking Jewish head covering.

“Wear it, so that your friends and neighbors can see it,” urged Julian Reichelt, the paper’s editor-in-chief. “Post a photograph with the kippah on Facebook, Instagram, Twitter. Go out into the streets with it.”

The newspaper’s kippah campaign came after Felix Klein, a German official in charge of monitoring anti-Semitism, urged German Jews on Saturday not to wear the head coverings in public due to rising anti-Semitism. Noting that anti-Semitic harassment and attacks had risen 20% over the past year, Klein warned, “I cannot advise Jews to wear the kippah everywhere all the time in Germany.”

It’s hardly the first time German Jews have been warned that it’s too dangerous to wear kippahs. In April 2018, an Israeli Arab visiting Germany wanted to prove to a Jewish friend that it was possible to wear a kippah without incident in Berlin — but he was attacked and beaten by a man shouting “Jew” in Arabic. Following that attack, Josef Schuster, the president of the Central Council of Jews in Germany, warned that Jews shouldn’t walk alone while wearing kippahs.

Such incidents aren’t unique to Germany. In 2016, a Jewish leader in the French city of Marseille urged Jews there that it was too dangerous to wear a kippah in public. In 2014, a Jewish school in Copenhagen advised students to wear baseball caps over their kippahs.

And yet, in response to these declarations, some cities have urged locals to wear kippahs in solidarity with Jews. “Kippah walks” have taken place in cities in Sweden, Germany, Poland and Denmark in recent years. Bild’s kippah campaign puts a nationwide spin on these gestures of solidarity. “To me, there is only one answer,” the editor explained in Monday’s paper, writing about anti-Semitism: “If even one person in our country cannot wear the kippah without putting themselves in danger, then the only answer must be that we all wear the kippah.”

His remarks were echoed by a plea from U.S. Ambassador Richard Grenell, who tweeted that he disagreed with the advice for Jews to avoid wearing kippot: “The opposite is true. Wear your kippa. Wear your friend’s kippa. Borrow a kippa and wear it for our Jewish neighbors. Educate people that we are a diverse society.”

The opposite is true. Wear your kippa. Wear your friend’s kippa. Borrow a kippa and wear it for our Jewish neighbors. Educate people that we are a diverse society. https://t.co/vd9nV9AvPG

This advice can — and should — be seen as relevant just about anywhere. After all, Britain saw record levels of anti-Jewish harassment and crimes in 2019, for the third year in a row. In the US, 2019 is shaping up to be nearly as anti-Semitic as 2018, when which anti-Semitic incidents reached the third highest on record. In Canada, too, 2018 saw a third straight year of record-breaking numbers of anti-Semitic incidents.

Just last month, after a gunman entered the Chabad of Poway Synagogue near San Diego — murdering congregant Lori Gilbert-Kaye and wounding three others — Rabbi Yisroel Goldstein, who was injured in the attack, urged Jews around the world to increase their Jewish engagement in response. “From here on in I am going to be more brazen. I am going to be even more proud about walking down the street wearing my tzitzit and kippah, acknowledging God’s presence,” he declared in a powerful op-ed published in the New York Times.  “And I’m going to use my voice until I am hoarse to urge my fellow Jews to do Jewish. To light candles before Shabbat. To put up mezuzas on their doorposts. To do acts of kindness. And to show up in synagogue — especially this coming Shabbat.”

As Jews, each one of us faces the choice of how to respond in the face of hate. Will we stand idly by? Or will we be like so many Germans and, in the face of rising anti-Semitism, launch our own campaigns in solidarity with our fellow Jews?

We all need to “wear kippahs” — and that can mean either literally wearing a kippah, or committing to other acts of public Jewishness. (Or both!) Wear a hamsa or a Star of David necklace. Subscribe to an Israeli newspaper. Start talking about taking your next family vacation in Israel. Blog about Jewish lifecycle events on social media. Next time you go out to dinner, choose a kosher restaurant. Invite guests for this Shabbat.

In whatever way is comfortable, ramp up your Jewish expression.

Perhaps the most famous Jewish prayer is the Shema, which declares: “Shema Yisrael, Adonai Eloheinu, Adonai Echad: Hear O Israel, Hashem is our God, Hashem, the One and Only.” The prayer is traditionally recited several times every day: for many Jews, it’s the last words they say at night, and the final words they strive to say before death. At its heart, the Shema is a declaration: a proud statement to all of Jewish belief.

When the Shema is written down, two letters are traditionally enlarged: the third letter, which is the Hebrew letter ayin, and the final letter, the Hebrew letter dalet. Together, these two letters spell eid, the Hebrew word for “witness.” Traditionally, that’s Judaism’s take on each and every Jew: Each one of us is a witness, and by reciting the Shema we are unabashedly declaring to the world that holiness and divinity, kindness and responsibility, are important. Each time we publicly embrace our Jewishness, we are spreading this timeless message anew.

The editors of Bild, and those who have heeded the newspaper’s suggestions, should be applauded for making a point of standing with us, and for celebrating Jewish symbols. Let’s remember that we, as Jews, need to stage our own personal solidarity campaigns as well.