After a Difficult Year I Danced Away My Depression 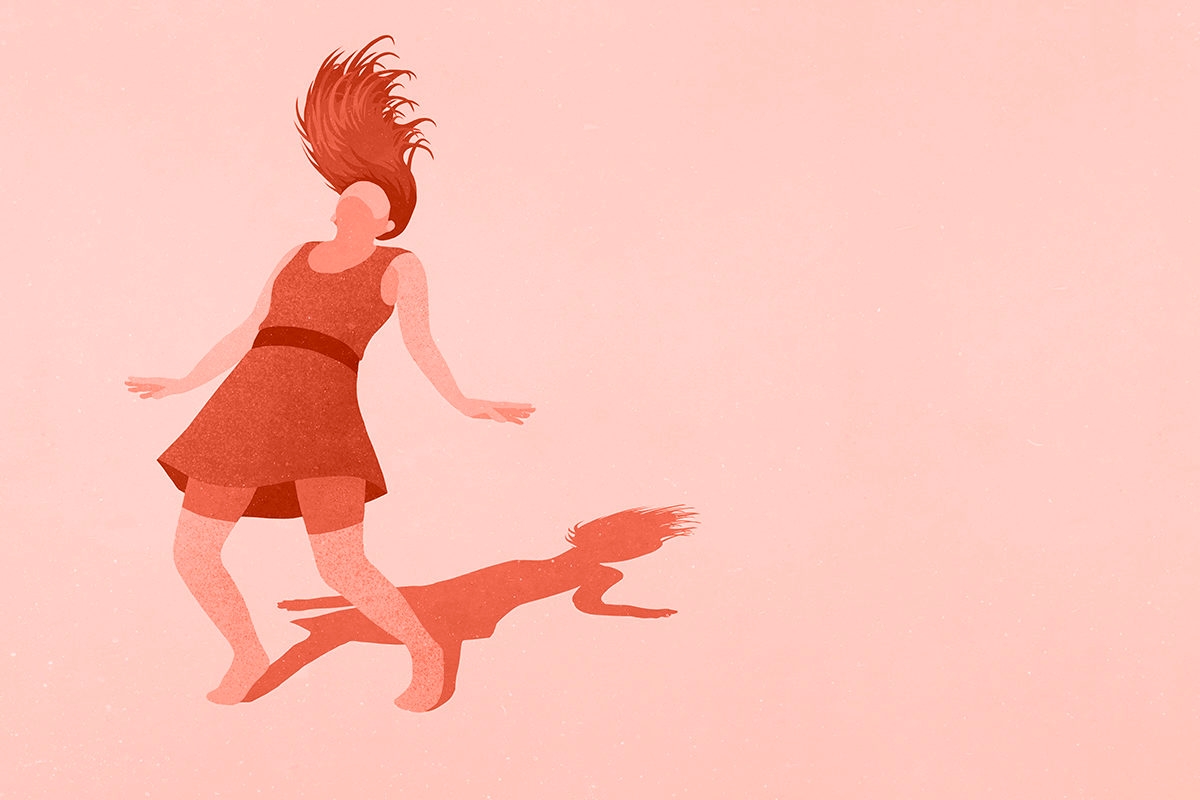 The brightly lit studio had mirrors on three sides, a mural of large lips on the back wall, and a DJ booth in one corner. I took my place on a pink dot on the floor, hoping I wasn’t too conspicuous in the sea of bouncy girls wearing midriff-baring spandex.

I was sporting an oversized, ill-fitting Mickey Mouse T-shirt and baggy grey sweats. At 49, I was probably 20 years older than everyone else there, and 30 pounds heavier.

Kelly, a blond instructor dressed in Pepto Bismol pink, entered the room calling out, “Haayy girls, are you ready to get your sweat on!? Any virgins in the house?” I assumed she was referring to people who were new to the class, and so I tentatively raised my hand. “Just follow along and have fun. Everybody, give me a whoop, and let’s get started!” The class began to cheer and the music started blaring deep techno beats.

Right away, I wanted to leave. It was a chilly October day and all I could think of was my cat and my couch. I felt crazy trying this new workout, especially since It had been a year since I had done any exercising at all. But I didn’t have the courage to walk out. Instead, I gave myself an inner pep talk. “I can do this,” I told myself. “I have to do this.”

The previous yeah had been hard. My father was diagnosed with cancer before Thanksgiving, and I found myself traveling back and forth from my apartment in Manhattan to my parents’ home in Connecticut. I would spend the day taking my dad to his doctor’s appointments and coercing my mom to eat, and then catch an evening train back. My goal was to get home in time to cuddle with my 6-year-old son before he fell asleep. When my father was moved to a hospital in the city, I stayed by his bedside. When he passed away in the spring, I doubled the attention I gave to my mother.

I spent pretty much all my waking hours taking care of other people. As a result, I had given up taking care of myself. I gave up writing, gave up cleaning, gave up showering regularly. Zoloft was making me anxious so I gave that up as well.

When fall came, my mother went to LA to spend a few months with my sister. Instead of caring for her,  I built my days around taking my son to and from school. I would walk him the seven blocks, kiss him goodbye, and then pick up a breakfast pastry on the way home. For the next several hours, I’d camp out on my living room couch, watching episode after episode of House Hunters until it was time to fetch the boy and, perhaps, a cookie.

As a stay-at-home mother I was doing a terrible job. My husband tried to be supportive. He would return from work to find the dishes piled up and me unshowered, and attempt to hide his annoyance and concern. I could see his frustration but I just didn’t care. I was exhausted. I became comfortable in my depression and I had no desire to get out of it.

By the time Rosh Hashanah rolled around, none of my clothes fit. I felt fat and hated myself for it, and I hated that instead of missing my father I was focusing on my weight. But, finally, I had had enough. I knew it was time to get my shit together. My first resolution was to exercise, to get myself off that couch. I wasn’t looking to get into shape, though that certainly would be a plus. I simply needed to move again, to feel alive again. I just had to find a place to go.

I posted on Facebook that I was looking for exercise class recommendations for an “overweight, out-of-shape, middle-aged woman.” I was worried about ending up at a studio full of intimidating LuluLemon-clad skinny ladies humble bragging about skipping a Saturday workout. I didn’t want to feel judged.

A friend suggested 305 Fitness, described on the website as “an addictive dance cardio party.” It was only two blocks from my apartment —I must have walked by the white storefront with a large pink neon sign reading “GIRLS GIRLS GIRLS” hundreds of times. But I didn’t pay it any mind; I had just assumed 305 was a strip club.

With encouragement from the chirpy young saleswoman at the front desk, I bought the special deal of a 10-day pass for $34 — a steal, as that’s also the price of a single session.

The truth is, I love dancing. Whether it’s grooving to “YMCA” at a party, yelling out “Mazel tov” while boogying to “I’ve Got a Feeling” at a wedding, or (literally!) kicking it to the hora at a bar mitzvah, I usually have to be pried off the floor. I am, however, not very good at dancing — or any good at all, really. I have trouble following choreography, and have never taken a dance class. I also never played sports. I never run. I always make a point to find a seat on the subway.

But I did do my time in old-school aerobics. I know how to grapevine! So, as I hopefully signed up for the 10-day pass, I figured, how hard could this be?

The lights dimmed and the class started. I “wooed” along with the other girls to the unfamiliar beat and began to move. I eventually got some basic steps down, even if my hips weren’t jutting out the way the skinny girls’ did. I managed to get some kicks in — maybe they didn’t have the bounces in between them, but they were kicks nonetheless. Next came jumping jacks, a lot of jumping jacks. I don’t jump. I blame it on bad knees but I really just don’t like to. So I modified with some kick steps and kept on moving.

Squats and planks were next. Kelly clearly did not understand how hard it can be for someone over 45 to get up from the floor. She even got us twerking. I have a big butt, but not that kind of big butt —  I don’t know of any muscles back there that control its wiggle. Still, I hunched forward, lurching my ass into the face of the girl behind me.

I wasn’t sure how much longer I could last when I entered a sort of a fugue state. For the first time in months, I forgot about my son and my father. I forgot about the too-tight clothes and the dirty dishes. For the rest of the class, I was free to be only aware of the beat of the music and the lead of the instructor.

The hour ended. I was sweating buckets but deliriously happy. Kelly stood at the door. “You were awesome out there, girlfriend,” she enthused while giving me a high five.

“Well, I modified a lot.” I murmured, as I collapsed in one of the two chairs outside the studio.

“That’s great, you do you!” she replied, and I don’t think she was being condescending.

That afternoon I received an automated email: “THAT WAS HOT! … You killed it! Way to work that room, babe.” I had never been a “babe” before. I was always too cynical and overweight to classify myself as cute, perky, upbeat “babe” material. I laughed it off — but on the inside, I secretly felt proud.

Two days later, I was back again. (After all, I had the pass!) This time the instructor was a man in a leopard-print tank top who challenged us to emulate Sascha Fierce, Beyonce’s onstage alter ego. It was no easier the second time, but his occasional encouragement of “Yes queen!” kept me going. When my 10-day trial ended, I paid for a full month.

I have been going back a few times a week ever since. Now, after dropping off my son, I often head straight to the studio. I still feel like the old lady flailing in the back but that’s alright — I do pretty well for an overweight, out-of-shape, middle-aged babe. But moving at this class also inspired me to keep moving in other areas, too — I’m now also finding  time to see friends, to write, to clean. I pay attention to my husband and son. I cry for my father and I call my mother in LA.

This isn’t to say that every day is easy. I still indulge in one too many cookies, and am angry with myself when my clothes don’t fit. Sometimes I still do go home and curl up on my couch after dropping off my son, but I’m getting better — it’s been over three weeks since my last episode of House Hunters.