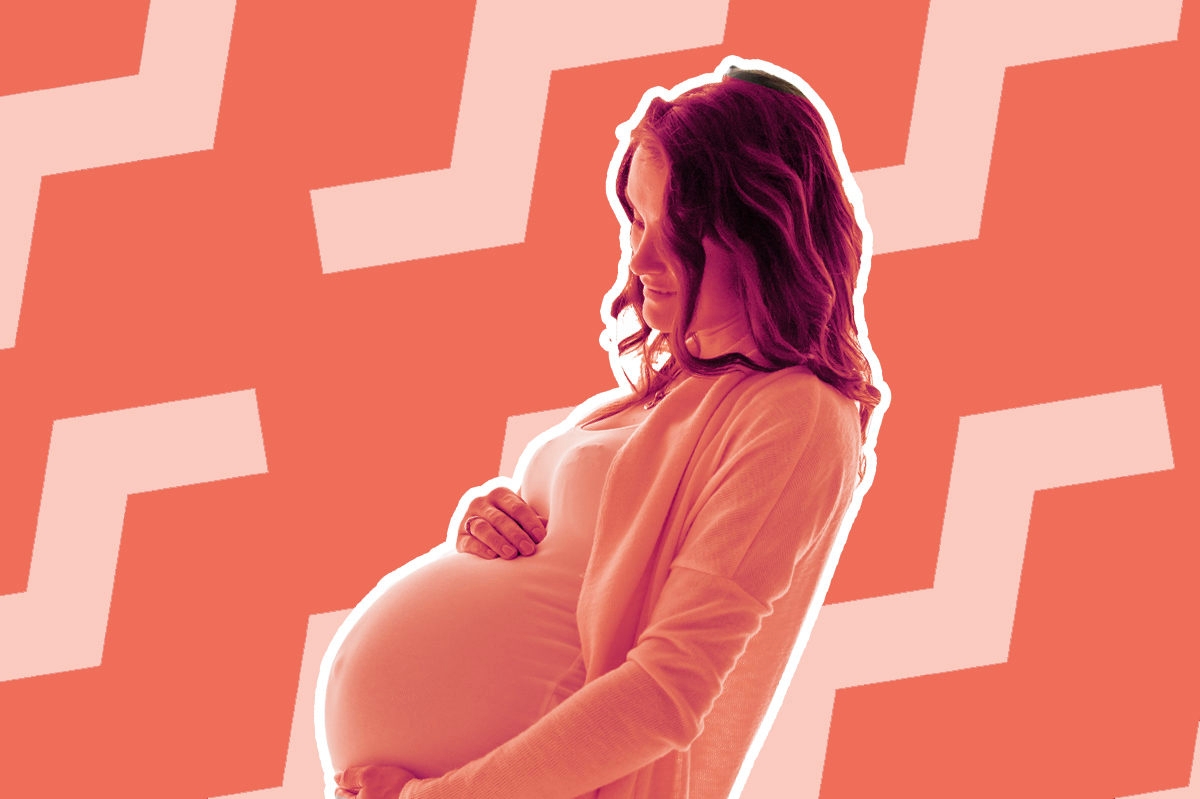 We here at Kveller can’t answer all of your questions about pregnancy. But do not fear: We can answer all your Jewish pregnancy questions. If you’re curious about anything from Jewish genetic diseases to whether Jews throw a baby shower, you’re in the right place. Read on for all you need to know.

What are Jewish genetic diseases?

What does testing for Jewish genetic diseases involve?

How early should I get tested for genetic diseases?

What if my partner and I are both carriers of a Jewish genetic disease?

Is there a Jewish alternative to a baby shower?

Can I buy anything for my baby before they are born?

How do I explain my Jewish superstition to non-Jews?

Can I go to a cemetery if I’m pregnant?

Can Jews be godparents?

What are Jewish genetic diseases?

When we talk about Jewish genetic diseases, we’re talking about Ashkenazi Jews in particular. While some Sephardic Jews may be carriers of specific diseases, they have more to do with their families’ places of origin, and less with their Jewish heritage.

There are 19 genetic diseases that are common with Ashkenazi Jews. About one in four Jews are carriers of these diseases, the most common of which are Tay-Sachs, Gaucher and Cystic Fibrosis. All of these genetic diseases are severe conditions, you can read more about them in our genetic disease guide.

What does testing for Jewish genetic diseases involve?

Testing for genetic diseases is pretty simple and involves a blood draw at your physician’s office or a spit test. There are even organizations like JScreen that will send a test to your home. Usually, the mom will get the genetic test done first, and if she tests positive, her partner will then get tested.

How early should I get tested for genetic diseases?

It’s never too early to get tested for genetic diseases. If you know you want to have children in the future, it might be worth discussing with your doctor. If you are a carrier of a genetic disease, you are going to want your partner to also get tested. If they’re not a carrier of that disease, the odds are in your favor for having a healthy baby.

What if my partner and I are both carriers of a Jewish genetic disease?

If both you and your partner are carrier of a specific disease, that means your baby has a 25 percent chance of being diagnosed with that condition. While 75 percent odds of having a healthy baby may be enough for you, and you can also conduct genetic testing throughout the pregnancy to detect a condition early. Some couples find that a 25 percent chance is too risky — in which case they may choose to adopt or use IVF with an egg or sperm of someone who is not a carrier.

If you do want to have a baby who is genetically yours, you can also use IVF and test the embryo for the conditions, then only implant the ones that are not affected by the disease. You can read all in more details about what to do if both partners are carriers of a Jewish genetic disease. As always, consult your doctor.

Some Jews do, and some Jews don’t. Contrary to popular belief, there’s actually no religious reason not to have baby showers, but…

It’s superstition, baby! No, but really, the reason Jews don’t have baby showers has a lot to do with the belief in the evil eye, or ayin hara in Hebrew, which, while not uniquely Jewish, is a superstition that has taken some credence in Rabbinic texts. Basically, many Jews believe that celebrating and talking about a good thing too much draws bad energy from others — and that, in turn, can cause calamity. (Some rabbis believe  that it was the evil eye that caused Hagar, Sarah’s servant, to miscarry Abraham’s baby, because Sarah put the evil eye on her.)

So, as to not jinx things, some Jews are resolute about not doing anything for the baby until they’re born.

Is there a Jewish alternative to a baby shower?

There certainly can be! Kveller contributor Amy Deutsch came up with some truly wonderful alternatives to a baby shower. From spa days, to freezer stocking parties, you can check out some creative ways to celebrate your pregnancy without actually buying or making anything for your future little one.

Do Jews have gender reveal parties?

Some do and some don’t! This is more of a personal taste thing, while some parents are against gender reveals, this Jewish couple who did a (gift-less) gender reveal for their child: for them, the event was about “bringing family together in a unique way to share in a special announcement.”

What are some Sephardic pregnancy celebration traditions?

While a lot of Ashkenazi Jews believe in the evil eye, in Sephardic households, according to Michele Klein, it used to be customary to celebrate a first pregnancy with a ceremony called kortadura de fashadura (in Judeo-Spanish) or tekti’ a el-g’daouere (in Judeo-Arabic), meaning “the cutting of the swaddling clothes,” which takes place around the fifth month of pregnancy. Female relatives and acquaintances would get together, a delicious spread would be put out, and a woman who has children and whose parents are alive does the honor of cutting from a luxurious piece of cloth that will become the baby’s first garment.

The cutting cloth ceremony would vary from culture to culture, and there are also other Sephardic pregnancy traditions, and other modern and personal traditions, like reciting benedictions over challah and sweet wine during a Rosh Chodesh.

We can, though quite a few Jews choose not to. According to My Jewish Learning, this is all about superstition: “It is customary to say “b’sha’ah tovah” (beh-shah-AH toe-VAH), meaning “at a good time.” The implicit wish is that the baby will be born healthy and safe — at which point “mazel tov” would totally be an appropriate greeting!

So while some pregnant people are fine with a wish of “mazel tov,” you’re better playing it safe and saying “b’sha’ah tovah.”

Can I buy anything for my baby before they are born?

There’s certainly no religious reason not too! But for the same reason, many Jews don’t throw baby showers, many also don’t buy anything for their baby until they’ve arrived. Still, you need to do what works for you, your sanity, and whatever makes things most comfortable for you and your family. For some moms, Jewish superstition is a comfort, for others, like Marion Haberman, it was a burden to come home with a baby to a house devoid of baby things. Talk to your spouse and your family — and make the right decision for you.

And P.S. If you are buying things for your baby, we have some decor tricks that will help to make for the perfect Jewish nursery.

How do I explain my Jewish superstition to non-Jews?

After you announce you’re pregnant, non-Jewish friends, co-workers, and acquaintances may be tempted to shower you with gifts, or propose a baby shower. So what do you do if you don’t want to get anything for the baby? Well, it’s best to probably be straightforward, and say something like: “I’m Jewish, and like many Jews I don’t believe in getting anything for my baby before it is born.” You can add that this is a very important Jewish superstition to you. If they still insist on getting you something, suggest a gift card, or a gift for yourself, like a spa treatment, a pregnancy pillow, or something else that you can use.

Can I go to a cemetery if I’m pregnant?

There is a superstition that going to a cemetery when you’re pregnant is bad luck and spiritually inappropriate, though that superstition is not anchored in any Jewish liturgy. Again, whether or not you chose to go to the cemetery when you’re pregnant depends entirely on how superstitious you are. Certainly, if you wish to avoid cemeteries, you can support a friend in mourning without attending the actual funeral, by coming to the shiva or sending food and support.

Can Jews be godparents?

Actually, yes! According to Dr. Dorothy Greenbaum, in the Jewish tradition, godparents are primarily an honorary role used by the Reform and progressive movements to find ways to be inclusive and help families bond to Judaism. The godparents can be named during a bris or a baby naming ceremony.

Do I need to fast on Yom Kippur if I’m pregnant?

One should not fast if it does in any way jeopardize their health. So if you want to fast on Yom Kippur, the Jewish day of atonement and a major fast day, you should, first and foremost, consult your doctor. If you do not fast, that doesn’t mean you can’t have a meaningful Yom Kippur. Here are some other traditions that will help make your Yom Kippur meaningful and impactful, even if you don’t fast!

Do I need to keep Kosher for Passover if I’m pregnant?

You certainly can! It’s always good to discuss any change in diet with your doctor, but as long as you aren’t too miserable, you definitely can.

What are some Jewish prayers pregnant people can say?

There are a few Jewish prayers you can recite for the health and the wellbeing of a pregnancy. For some parents, pregnancy is a shehechiyanu moment, and so they say that prayer reserved for first times and unique occasions. Reform Judaism has a prayer for prospective parents. JewishMom provides us with some older traditional prayers.

Tamara Reese found the following prayer in ” Cliffs Notes for Bad Jews,” which was helpful to her during her pregnancy:

God of all generations, You have blessed our life with companionship and mutual love. For all Your past gifts we are thankful, now our hearts are full, in this time of expectant hope.

We await the birth of a new life and You are with us. As a parent holds the hand of a child, so now make our spirits serene. Let us wait in confidence and calm, with hearts unafraid. Let our child be born to health and happiness. Help us to be worthy parents, and bless us with a long life nourished and sustained by the sweetness of family love. Amen.

Should I be thinking about circumcision already?

Pregnancy is a good time to discuss circumcision with your partner! If you’re looking perspective about it, we have plenty of different points of view from Jewish moms; from a mom who believes her son’s bris finally made her a mom, to a mom who is against circumcision and so much more.

If you know you want to have your child circumcised, you might want to start interviewing mohels now. (Plus, never fear: We have a full bris guide for you to peruse.)

What about baby naming ceremonies?

What are some good infertility resources for Jews?

There’s nothing Jewish about infertility, though the bible is full of instances of stories of infertility. There are Jewish organizations that provide help both financial and emotional for women struggling to get pregnant, organizations like Yesh Tikvah and Hasidah.

Are there Jewish prayers for fertility?

Even if you don’t usually pray, some people find it helpful to have a spiritual ritual to cope with the trying times of infertility. Luckily, My Jewish Learning has plenty of prayers for both infertility and pregnancy loss.

Why So Many Holocaust Survivors Are Celebrating Their Bar/Bat Mitzvahs

Gender-Neutral Names Are More and More Popular. Here Are 10 Jewish Ones.

My Husband's Grandmother Cooked in Yiddish