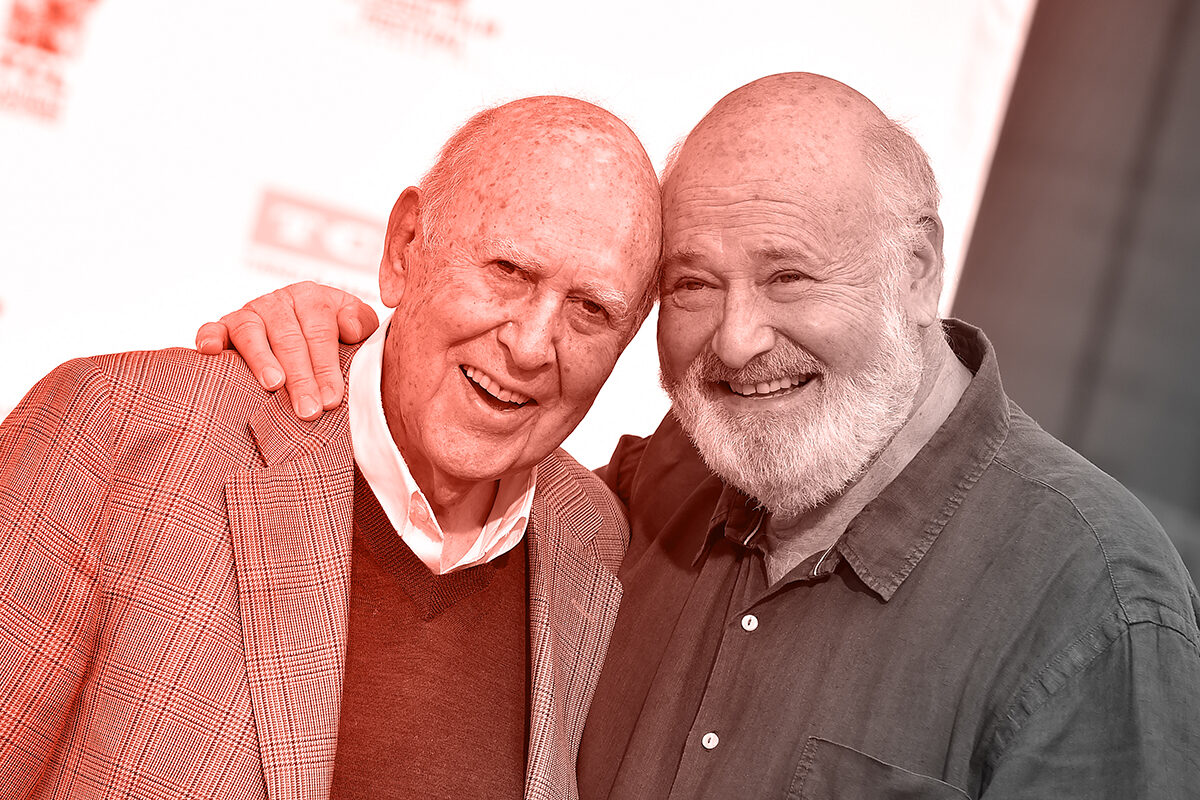 We lost an incredible Jewish legend today: Comedy icon Carl Reiner has died at the age of 98.

As the editor The New York Jewish Week, Andrew Silow-Carroll, mentioned in an epic thread on Twitter, if Reiner had only done a fraction of what he accomplished in his long and storied life, it would have been enough (dayenu!). The Jewish boy from the Bronx was a World War II veteran who created and starred in some of the funniest and most brilliant TV shows, comedy sketches, and films known to humankind. A very abbreviated list includes Caesar’s Hour, The Dick Van Dyke Show, The Jerk, and the Ocean‘s movies.

Reiner was also a loyal friend to his comedic soulmate and best buddy, Mel Brooks — whom he called the funniest man alive, and with whom he watched movies every night. But more than anything, Carl Reiner was an amazing dad and husband. Reiner and his wife Estelle had three kids: Rob, 73; Annie, 71; and Lucas, 60.

Like many great Jewish couples, Reiner met Estelle Lebold in the Catskills — specifically, at a left-wing camp called Allaben Acres, where, at age 20, he worked as a comedian and she was a 28-year-old artist, designing sets for the shows. “People said, this is not a match,” Carl recounted in a recent quarantine diary. “But it was the kind of match that didn’t work because it only worked for 65 years, and if she didn’t pass on we’d still be working on it.”

For Reiner, The Dick Van Dyke show — which starred Van Dyke as Rob Petrie, a writer on the fictional Alan Brady Show — was semi-autobiographic, and its biggest heartthrob, Petrie’s wife, Laura (played by Mary Tyler Moore), was Estelle. Reiner said his wife best defined the secret to the couple’s success: “Marry someone who can stand you.”

Throughout their marriage, the Reiners were politically active and instilled that value in their children: “She [Estelle] was very politically active,” their son, comedian Rob, told the AP. “I grew up in a house when we talked about civil rights and they were against the war in Vietnam,  and those kinds of things were talked about in my house all of the time.”

Estelle died in 2008 at age 94. “She was around to see how good they were, but through the years, since she’s left, these three kids have become icons,” Reiner said of his kids in a recent interview. (Just how sweet is that?)

Of course, Reiner’s kids thought their dad the icon among them. “I was pretty much forged in this world of show business through my father, I idolized him, I admired him so much I loved him, looked up to him, and I pretty one wanted to do what he did,” Rob said in an interview.

“When I was 8 years old… I told him, ‘Dad, I want to change my name,’ and he was like, oh my God, this poor kid at age 8 is already feeling the pressure of being Carl Reiner’s son and he felt so bad, and he says, ‘Well, what do you want to change your name to?’ and I said, ‘Carl,’ I just wanted to… I wanted to be like him,” Rob told The Atlantic.

As a teen, Rob — who went on to direct Spinal Tap, Stand by Me, and The Princess Bride — spent every afternoon listening to “The 2000 Year Old Man.” That’s not because the comedy sketch starred his father (and Brooks), but because it was so inspiring and so brilliant.

The admiration, of course, went both ways. “He always knew when the joke was, even when he was really young,” Reiner said. And when his son started making movies, Reiner realized that the student had surpassed the master: “He did better pictures than I could’ve done.”

Like any proud Jewish dad, Reiner always enjoyed boasting about his children’s achievements. At a 2011 AARP event, welcoming his son to the stage, he finished his funny speech with the following very loving and very Jewish message:

“If there’s one thing that pleasures a parent is to have successful children. I have three children who we sent out into this world who are the most nourishing people. And Robbie being the firstborn…  How many people who are not Jewish who know the word naches, the word is to derive great pleasure from the successes of your children. And you schep naches. I only wish for all of you the kind of naches schepping that I have gotten from this man,” he said, as he called Rob up to the stage.

Reiner was also an early adopter of Twitter, which he used to promote his fierce activism up until his final days. He also used the platform to schep naches about his two other children: Annie, a psychoanalyst and jazz singer, and Lucas, an artist.

He called Annie “the world’s greatest singing psychoanalyst.” He tweeted about Lucas’ art shows, tweeting “1 proud papa am I.”

On the morning of June 30, Rob Reiner wrote on Twitter: “Last night my dad passed away. As I write this my heart is hurting. He was my guiding light.”

Reiner said that he wanted, most of all, to be remembered as “as someone who loved his family and tried to make people happy.” Here at Kveller, we want to honor his wishes. May the memory of this wonderfully funny family man be a blessing.

Nothing pleases me more than knowing that I have lived the best life possible by having met & marrying the gifted Estelle (Stella) Lebost—who partnered with me in bringing Rob, Annie & Lucas Reiner into to this needy & evolving world.