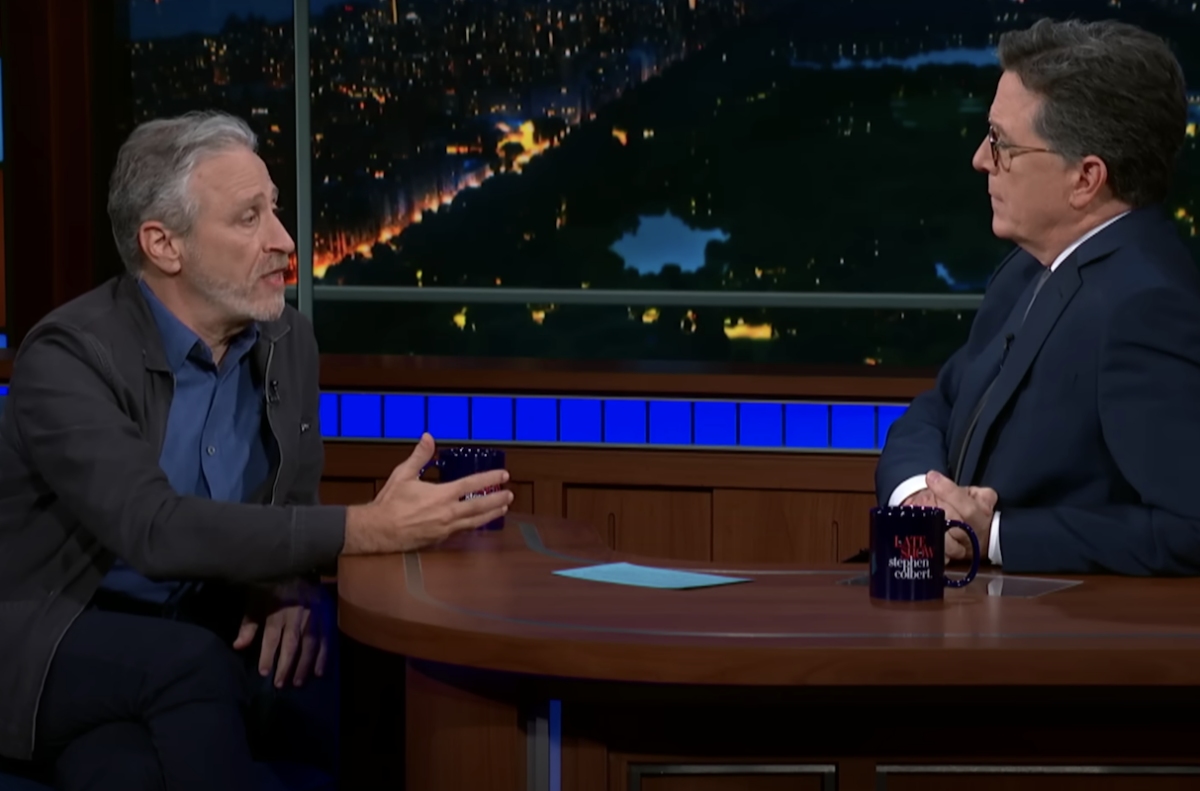 I grew up in the golden age of Jon Stewart. Before the idea of a Trump presidency was something beyond a drug-induced trip, before the age of Twitter threads and viral TikToks and socialist podcasts, Jon Stewart on “The Daily Show” completely revolutionized the idea of political satire.

While he was not the show’s original host, he took its format — satire formatted like a news show, with correspondents and segments — and made it political and hard-hitting (well, perhaps not by today’s standards, but definitely by the standards of the early 2000s). He and his team irreverently called out politicians and pundits.

While spearheading the show, he also gave platforms to some of the most brilliant political satirists of our time — Sam Bee (bring her back!), Wyatt Cenac (“Problem Areas” is underrated), Jon Oliver of the perennially Emmy award-winning “Last Week Tonight,” and, yes, Stephen Colbert, who made the move from satire to late night show host a few years ago with “The Late Show With Stephen Colbert.”

Stewart, who now hosts “The Problem” on Apple TV+, appeared on Colbert’s show this week. While the idea of the two comedians reuniting usually makes me a giddy with joy, in practice, their discussion about the recent antisemitic behavior of Kanye West, Kyrie Irving and Dave Chappelle had me asking myself — Jon Stewart, what the actual fuck???

I mean, pardon my French, but at a time of rising antisemitism, the last person I expected to give our haters some ammunition is the man who taught me to call out straw man arguments, logical fallacies and just plain old callousness.

As comedian and actress Hannah Einbinder so brilliantly wrote on social media after Dave Chappelle’s dangerously antisemitic monologue on SNL, Chappelle used “a genius technique: two truths and a lie,” in which he used “truths” — in his case, funny jokes — to provide a digestible package for the propagation of bigotry and antisemitic tropes. This kind of framing allows non-Jews to assuage their feelings by gaslighting us about these antisemitic statements, to tell us we’re taking things too seriously.

Stewart employed a similar technique, wrapping what amounts to good old victim blaming in excellent humor about blueberry bagels and basketball and white supremacy. He basically told us Jews calling out antisemitism right now that we’re blowing things out of proportion, and claimed that the real problem in the discussion of antisemitism isn’t, you know, the antisemitism itself, but the fact that we use censorship to deal with it — which honestly, in itself, is an inaccurate statement.

“I don’t believe that censorship and penalties are the way to end antisemitism,” Stewart said.

Except no one is being “censored.” People are exercising their free speech — and they’re being penalized when they use that right to practice hate speech and dabble in antisemitic tropes.

In the case of Kanye West, that means getting business deals cancelled and tweets deleted when they don’t meet the standard of the platform that he shared them on.

In the case of Kyrie Irving, Stewart said that he was being penalized for having a thought and was made to “sit in a corner” until he no longer believed in antisemitic tropes. That’s also inaccurate. An NBA player shared an antisemitic movie whose sales on Amazon skyrocketed as a result — and he was penalized as a consequence. In fact, some of the conditions of his reinstatement include having difficult conversations with Jewish people, something that Stewart actually seems to be arguing for?

In the case of Chappelle, the consequences are… nothing? Has he suffered any consequences, any censorship, aside from, rightfully, being accused of furthering antisemitic stereotypes?

Still, Stewart thought it was important to stand up for his friend. Never mind that being a friend sometimes means calling your loved ones on their bullshit, not making lame excuses for them.

Stewart said that after Chappelle’s monologue, he got messages saying that the comedian normalized antisemitism. He then made fun of the people who share those concerns by telling them that from perusing comment sections on the internet, one could definitely surmise that antisemitism “is pretty fucking normal.”

Except there’s a difference between rogue people in a comment section and a comedian given a platform on one of the nation’s most popular shows. And Stewart knows that. It’s honestly so lazy to pretend that he doesn’t.

“I think just reflexively naming things antisemitism is as reductive as some of the things that they might be saying — it immediately shuts down a conversation,” Stewart said. Uh, Jon, we didn’t name anything antisemitic that wasn’t pretty much a textbook example of it.

It used to be that Jon Stewart was late night’s edgy Jewish comedian — and he often faced antisemitism, with people bringing up his last name, Leibowitz, to delegitimize him. In the realm of late night TV hosts past and present, he is, in fact, the most prominent Jew (another argument against us controlling show business, I suppose??). And Stewart did jokingly call himself a “spokesJew” in his conversation with Colbert.

The thing that made Stewart’s chat on Colbert all the worse is that he was actively participating in that gaslighting Einbinder referred to — telling fellow Jews to stop taking things so seriously, to stop putting the antisemitic label on things because it’s a cudgel to debate.

On multiple occasions, Colbert (bless his sweet soul) tried to steer Stewart away from his BS, but — I guess on brand with stereotypes about cranky middle aged Jewish men (sorry, I love a lot of you) — Stewart refused that kind escort off the ledge. Colbert tried clarifying that people didn’t actually call Chappelle an antisemite, but instead accused him of the “promulgation of antisemitic tropes.”

“Comedy is reductive,” Stewart responded, “And I think part of what it is, is we play with tropes, because everyone has prejudice in their lives and in the way that they view things. And comics rely on those prejudices as a shorthand for our material. Even the wokest of comics plays with tropes to a certain extent,” he continued, honestly making me want to tear my hair out.

I mean, seriously, Jon?? That’s the whole point. For sure, playing with tropes is a big part of comedy, but we know it can very easily fall into plain old lazy racism — that’s why we expect more of comedians! And most of them can manage to be truly funny and not peddle prejudices. Please.

Stewart talked about how hurt people hurt people and about how, in order to heal wounds, we need to open them up and disinfect. And um, I’m all for talking and healing wounds and airing out our prejudices in the open — but when it comes to racism and antisemitism, we can’t always have a kumbaya moment.

It did remind me of the Jimmy Kimmel sketch about a medication that fights antisemitism.  It was an inane, not funny sketch, but it was also unwittingly wrongheaded for another reason: The most virulent of antisemites don’t want to heal. There’s not really a way to make every racist person stop being racist. Sometimes, it’s just better not to amplify their beliefs (like on a major network, you know??)  — and sometimes, yes, you need to deplatform them.

They can’t be made to see that there’s anything wrong with their prejudices. They feel victimized by the people at whom they direct hate. And when they say that all those people — in this case, Jews — want to do is censor them, it furthers that feeling of victimization. In fact, it furthers a misguided idea that calling out antisemitism is just a way to shut down debate.

The great danger of moments like this lies in the way they affect people who may hold some prejudiced beliefs, but who are open to conversation. When Chappelle and Stewart tell them that their feelings about Jews are understandable — and that their fear that Jews want to censor those beliefs is also valid, even if Stewart named exactly why they are wrong — it could help push them towards more prejudice, not away from it.

Naming something as antisemitic and dangerous doesn’t shut down debate — we shouldn’t say that about any other form of prejudice, from racism to xenophobia, and we shouldn’t say it about antisemitism, either. Calling out someone’s prejudice doesn’t mean you can’t have a productive conversation and do better and actively work on being a less prejudiced person. And any real conversation about the relationship between Black non-Jews and white Jews should include privilege and systemic racism, as Stewart seemed to allude.

In the world of two truths and a lie, Stewart also shared some truths about antisemitism — “we have our own tropes. A white person’s success — that’s privilege; a minority success is empowerment; a Jew’s success — that’s a conspiracy.” He said that “being in an industry isn’t the same as having a nefarious and controlling interest in that industry and intention.” But at the end of the day, his rant came down to: Why don’t we treat antisemites with enough compassion?

There’s a constant straw man argument being furthered right now about censorship. The truth is, very few people are actually being censored, and “being cancelled” is more of a talking point than anything else. Kanye’s music is still being streamed. Louis CK is still performing comedy. Most people who complain about being cancelled do so on public platforms that they still have.

“I’m called antisemitic because I’m against Israel’s treatment of Palestinians,” Stewart also said, which was another cringe-worthy moment. Many antisemites conflate antisemitism in the diaspora with Israel and Palestine, when those are two very separate issues. I say this as an Israeli person who believes that we should talk about the Israeli-Palestinian conflict more, but who also knows that it doesn’t belong in these types of conversations — where it’s usually used either to second guess the American-ness of American Jews, or to shut down legitimate conversations about real antisemitism in this country.

Stewart ended his rant about antisemitism with a jokey aside — “if you don’t want us around, write your own Broadway shows” is honestly such a good Jewish joke — look, a joke that relies on tropes that isn’t offensive!!! You did it, Jon! On multiple occasions during that conversation, in fact. So why do you make excuses for comedians who don’t??

Colbert, who seemed utterly exhausted by the whole exchange, did capitulate that he didn’t disagree with Jon but “I just wanted to say that I condemn antisemitism in all of its forms and I stand with my friends in the Jewish community, a counterpoint.”

It was a joke — but it was also funny because it was, truly, a counterpoint to the one Stewart was making.

The funny thing is that both Chappelle and Stewart actually deconstructed antisemitism pretty well. Except instead of stopping at the arguments and speaking points that would help dismantle it — arguments shored up with funny jokes about American presidents and the people of Ferguson, Missouri — they went further, turned right back around and validated the feelings in the heart of antisemites. For Chappelle, it’s OK to think that Jews control Hollywood; for Stewart, it’s OK to feel like people are victimizing you by calling you an antisemite.

Some would argue that, coming from a jokingly self-proclaimed “spokesJew,” the latter is worse.