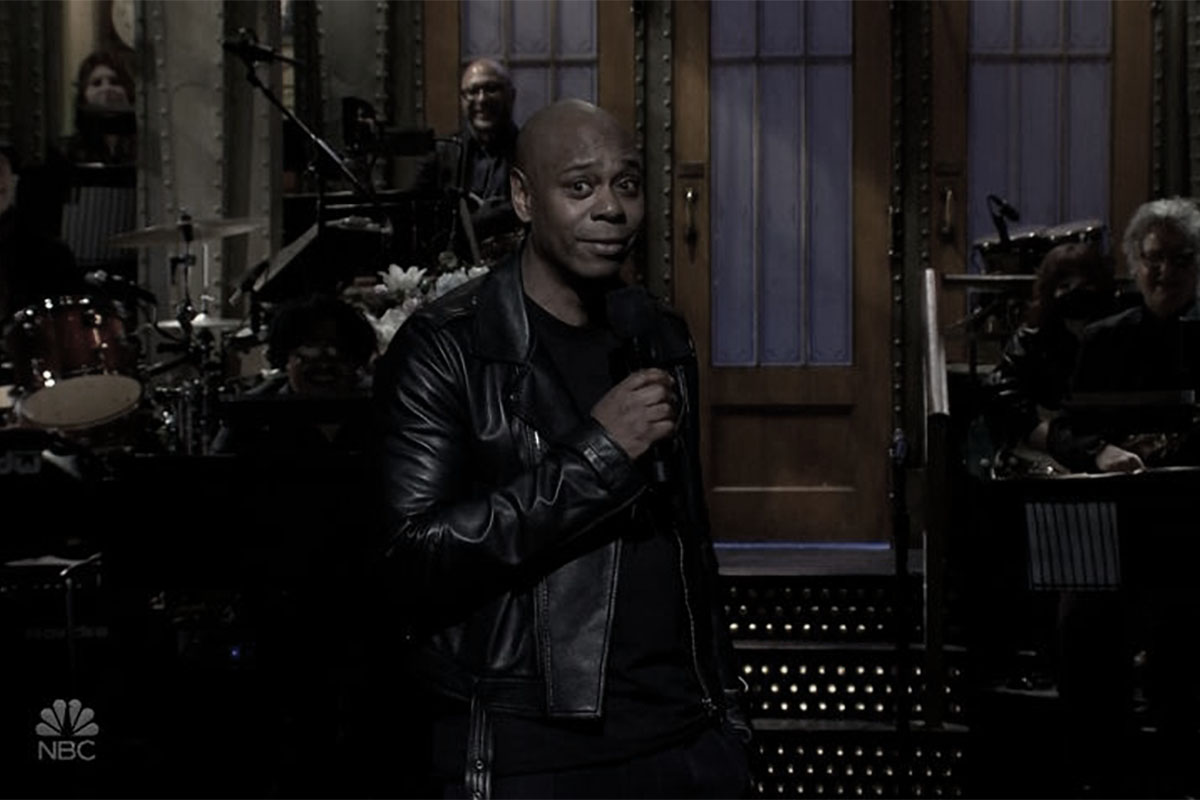 This past Saturday night, “Saturday Night Live” audiences tuned in to watch Dave Chappelle make his return to the show. This was his third time hosting and his biggest public appearance since the controversy around the comedian’s 2020 Netflix special “The Closer,” in which he told anti-trans jokes that denigrated trans bodies and fed into dangerous and yes, deadly, preconceptions about trans people.

Some had hoped that this would be a moment of redemption. After all, this was one week after Amy Schumer hosted; she took on antisemitism and embraced Jewish pride in what was arguably the best episode of the show’s current season. It seemed that SNL, which boasts its first nonbinary cast member this season, was on its way to becoming a sort of vehicle for positive, social messaging.

Instead, Chappelle didn’t acknowledge his problematic statements and, once again, used his comedy and platform to reify dangerous preconceptions about a minority in this country — this time, Jewish people.

Chappelle started his monologue by reading out a prefabricated statement: “I denounce antisemitism in all its form, and I stand with my friends in the Jewish community,” he said in an unenthused, neutral voice.

“And that, Kanye, is how you buy yourself some time,” he then joked.

Chappelle said that he learned early in his career that there are two words you shouldn’t say together in sequence: “the” and “Jews.”

“I’ve never heard someone do good after they said that,” he explained.

He then said that Kanye committed the ultimate faux pas because in the entertainment industry, everyone knows that “if they’re Black then it’s a gang, if they’re Italian then it’s a mob — but if they’re Jewish then it’s a coincidence.”

Chappelle also peppered this monologue with some mental health stigmas, alluding to Kanye West’s bipolar diagnosis and saying that being mentally ill is an excuse for bad behavior. “You’ll kill somebody if you’re mentally ill,” he said.

“I’ve been to Hollywood and — no one get mad at me — I’m just telling you what I saw,” he said, adding, “It’s a lot of Jews. Like a lot.” He then tried to walk it back with “there’s a lot of Black people in Ferguson, Missouri; that doesn’t mean we run the place.”

Then he decided to go all the way in, confirming that he can understand why “you could adopt the delusion that Jews run Hollywood.”

“It’s not a crazy thing to think, but it’s a crazy thing to say out loud in a climate like this,” he summarized, before moving on to talk about Herschel Walker and leaving most Jews watching with an ominous feeling and a bad taste in their mouths.

There were some genuinely good jokes in this monologue — like Chappelle joking that Kanye getting dropped by a Nazi-founded company was the student surpassing the teacher — but most of it relied on laziness. Some of it was flat-out wrong — like alluding that Adidas dropped Kanye immediately when it actually took them over a week and a lot of pressure. (The company is still selling his shoes, just under a different name).

While talking about Kyrie Irving, Chappelle also fed into a dangerous divide that white supremacists absolutely love — pitting Jewish and Black people against each other.

“I know the Jewish people have been through terrible things, but you can’t blame that on Black Americans — you just can’t,” Chappelle said of Irving’s experience. Except nobody was — Irving got in trouble for promoting an antisemitic movie and refusing to admit the video was antisemitic.

The emphasis on this supposed divide ignores the existence of Black Jews — and also ignores the fact that, despite so many Jews benefiting from white privilege now, we, too, were considered second class citizens not so long ago even in this country, chased out of mainstream trades and spaces. Many Jews worked in entertainment and banking because they weren’t welcome in more mainstream industries.

The truth is that the majority of people who hold wealth and power in this country in the industries people see as controlled by Jews aren’t Jewish. As Bess Kalb put it on Twitter, “Is the CEO of the streaming service that pays [Chappelle’s] salary Jewish? Nope.” The same is true of almost every major network in this country.

Chappelle also repeatedly claimed that saying antisemitic things is the ultimate faux pas, but most Jews know that’s not true. Both inside and outside the entertainment industry, we’re pretty used to dealing with antisemitic microagressions that allude to age-old canards — from money and control, to our big noses and hair, to our neuroses and more. Amy Schumer released an incredible skit on just that back in October.

In his monologue, perhaps unwittingly, Chapelle kept referring to Jews as “you people” — a thing that always gets my antisemitic radar tingling. He was speaking to a New York crowd that I’m sure had some Jews in it. But this is the kind of othering we’ve experienced for centuries. He made fun of how weird our holidays sound and of how some of us dress — the kind of cheap humor a lot of bad jokes about this moment seem to rely on.

Yet the crux of it all, at least for me, is this: A lot of people can hear what Kanye says but distance themselves from him — because he is so out there, because of his bipolar disorder, because he is so outside the realm of someone who they would fathom associating with in real life.

But Chappelle projects himself as a level-headed, reasonable person, a real American (he lives on a farm in Ohio) despite the fact that he himself is a multi-millionaire with a huge fanbase and platform. Here he is, an everyman, a reasonable person. It’s as if he’s saying that if he reasonably, calmly, collectedly came to the same conclusions that your everyday antisemitic conspiracy theorist holds, there’s nothing wrong with holding those beliefs — only with projecting them in polite society among, you know, “us people.”

These feelings and preconceptions about us — the ones that Chappelle affirmed in his monologue — they don’t just stop in people’s hearts and minds.

Earlier this month, I got an e-mail from my Jewish NJ daycare about a security threat affecting synagogues in the area. My heart sank. I tried to send my son in with a smile — I’m Israeli, I’ve gone through intifadas, I’ve worked at synagogues and Jewish institutions for most of my adult life, so I know what it’s like to be scared. I also know what it feels like to wake up one morning in the country that you call your new home and find out that 11 people were killed at a synagogue just because they were Jewish.

Ok! Since my son’s synagogue preschool has amped up security and New Jersey’s temples were evacuated this month, here’s a test to see if a funny joke is anti-Semitic: If you replace “Jewish people” with another race is it racist? Are you making a uniquely terrifying time cute? https://t.co/BXs0bK6iMt

The other day, my son and I were at a craft store, and he wanted to buy a big, shiny star of David to put on our door for Hanukkah. I dissuaded him: Yes, we have a mezuzah on our door, but do we need something that really stands out and signals to everyone how Jewish we are?

I don’t feel in control. I feel unsafe. Even in my neighborhood, where I’m hardly the only Jew on my block, I’m worried about projecting my Jewishness. And sketches like Chappelle’s make me even more worried.

Chappelle tries to act like his monologue and his platform — which he has earned through undeniable talent and hard work — are not a big deal. But they are. And in this case, by feeding into these conspiracy theories, he’s made himself a vehicle for white supremacy. His words will serve as fuel for people who hold virulent beliefs about the minorities he mocks, from trans people to Jews — and will put our families in danger.

Is it reasonable to think Jews run show business? I wouldn’t call this monologue reasonable. I’d call it dangerous.