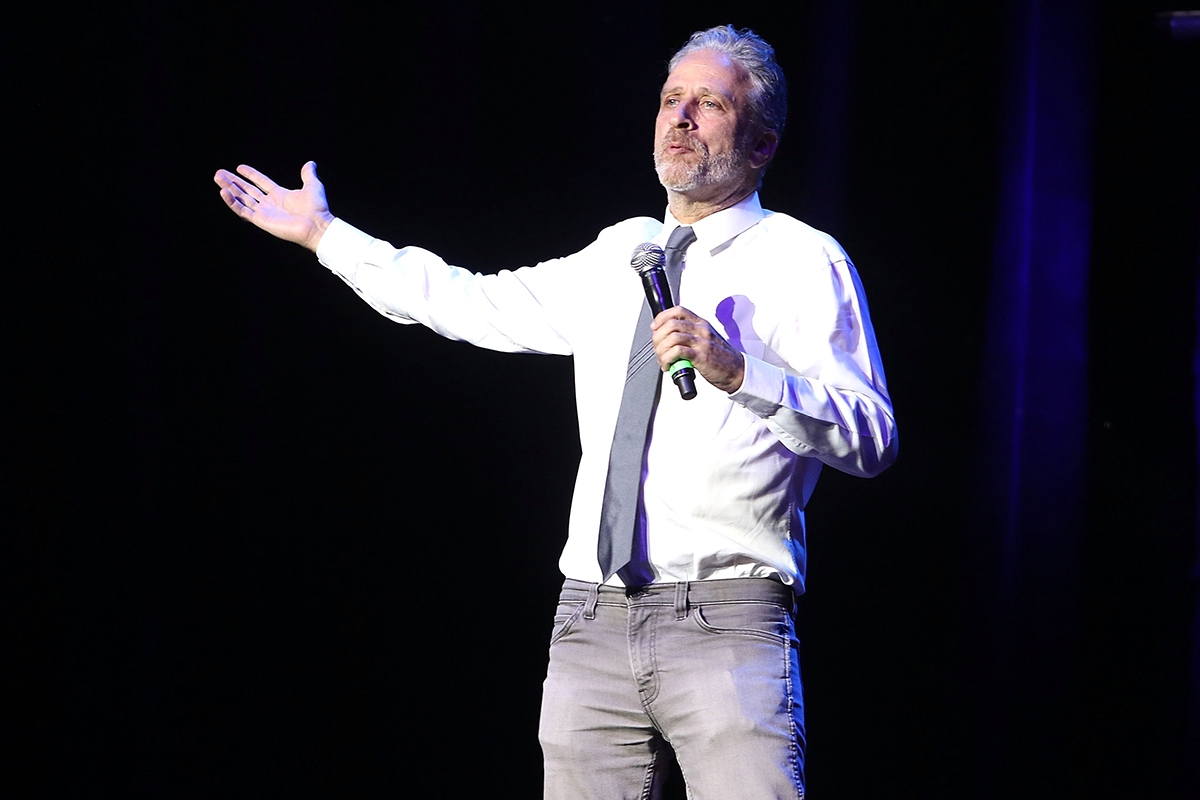 After a hiatus of more than six years that followed his departure from “The Daily Show,” Jon Stewart returned to regular series TV last month with “The Problem with Jon Stewart.” Debuting on Apple TV+, it’s a new talk show that features in-depth discussion of different political issues, with new episodes debuting every two weeks — the second episode premieres Thursday, Oct. 13.

The 58-year-old Stewart, of course, is Jewish, and has frequently referenced Judaism throughout his comedy career, including before, during and after his time on “The Daily Show.” Odds are he will be cracking Jewish jokes again on his new show.

To mark his return to the screen, here are some of the funniest Jewish highlights from Stewart’s career:

In a standup routine from the 1990s, Stewart discussed his religious beliefs. “I’m a Jewish guy, but I’m not a serious Jew,” he says in the clip, pointing out that he doesn’t wear a kippah, while reminding his audience it’s not called a “Jew beanie.”

Stewart goes on to say that while he believes in God, he suspects that God, billions of years after creating the world, may have “moved on to another project.”

2. “Jesus, Muhammad and Moses all went to the same high school.”

In another standup routine, from 1996, Stewart talks about the Middle East, foreign policy and the state of Israel.

“I’m a Jewish guy, I’ve been to Israel, I’m really glad it’s there, but there will never be peace there,” he says. While noting that all three major Abrahamic religions give Israel and Jerusalem significance, he jokes that “Jesus, Muhammad and Moses all went to the same high school.”

In 1998, near the end of the run of “The Larry Sanders Show” on HBO, Stewart appeared as himself, as part of an arc in which he was in line to replace Sanders (fellow Jewish comedian Garry Shandling.) In one episode, Stewart is the guest host of the show, and they produce a German game show parody called “Adolf Hankler,” in which the character Hank Kingsley (Jewish actor Jeffrey Tambor) dresses as Adolf Hitler and answers every question with “the Jews.”

In the tradition of Mel Brooks’ “Springtime For Hitler,” the offensiveness of the premise is the joke itself, as it leads Jewish “Seinfeld” actor Jason Alexander — “the celebrity spokesman for the Anti-Defamation League” — to walk off the show in protest. When Stewart says the Hitler sketch “doesn’t bother me, and I’m Jewish,” producer Artie (Rip Torn) retorts, “so was Jesus, and we all know where he ended up.”

In 2008, about a decade into Stewart’s “Daily Show” run, he made a guest appearance on the Christmas special of his correspondent-turned-fellow-host, Stephen Colbert, which was titled “A Colbert Christmas: The Greatest Gift at All.”

In Stewart’s segment, the duo sang a duet of an original song called “Can I Interest You in Hanukkah?”, in which the Jewish Stewart explained the Festival of Lights to the Catholic Colbert.

The song, written by “Tweet of God” author David Javerbaum and the late Fountains of Wayne songwriter Adam Schlesinger, explains aspects of Hanukkah, before finishing with a few bars of “Hava Nagila.”

On “The Daily Show,” during the Republican presidential primaries in 2012, Stewart fronted a segment showing how the GOP presidential candidates all touted their love for Israel, while implying that then-President Barack Obama did not share that love.

Stewart, however, then pointed out that Obama had spoken at that year’s AIPAC Israel lobby conference in Washington, and had vowed there to guarantee Israel’s security. The show even spliced in Obama singing a bar of Al Green’s “Let’s Stay Together,” which was from a different speech.

“Get a sukkah, you two,” Stewart said of Obama and Israel.

In 2014, around the time of Israel’s war in the Gaza Strip, “The Daily Show” broadcasted a segment in which four different correspondents on the show yelled in Stewart’s ears the minute he mentioned Israel. Jordan Klepper went one step further, calling Stewart a “self-hating Jew” for daring to even hint at criticism of Israel.

The bit was meant to mimic the type of overheated rhetoric that tends to take place about Israel, especially when there’s a war going on — and also the way in which a single article, or even a single sentence, from The New York Times or Joe Biden, could be seen by different people as horribly biased for or against Israel.

“Just merely mentioning Israel, or questioning in any way the effectiveness or humanity of Israel’s policies, is not the same thing as being pro-Hamas,” Stewart said. He ultimately threw his hands up and decided to “talk about something lighter, like Ukraine,” unaware that country would form the basis of a presidential impeachment five years later.

And speaking of which…

Stewart retired from “The Daily Show” in August of 2015, just two months after Donald Trump announced that he was running for president. Many “Daily Show” fans have noted that they missed Stewart’s commentary during the Trump era.

But that doesn’t mean Trump and Stewart haven’t clashed. Back in April of 2013, Trump used a tweet to cast aspersions on Stewart’s Jewishness.

“If Jon Stewart is so above it all & legit, why did he change his name from Jonathan Leibowitz? He should be proud of his heritage!” Trump wrote in the tweet — which, like all others in his account, was taken off Twitter earlier this year. Trump has referred to Stewart by his given surname other times as well.

Stewart addressed the episode during a stand-up segment at a “Stand Up For Heroes” veterans’ charity event, days before Trump’s election in 2016.

“I started to think to myself, oh, I think this guy is trying to let people know I’m a Jew,” Stewart said. “And I think to myself, doesn’t my face do that? Where have you seen this face, other than on a poster for ‘Yentl’?”

He went on to note that “it would be funny if it wasn’t so toxically f***ing crude and horrible.”