Did This Jewish Actress' Character Predict the End of 'Game of Thrones?' – Kveller
Skip to Content Skip to Footer

Did This Jewish Actress’ Character Predict the End of ‘Game of Thrones?’ 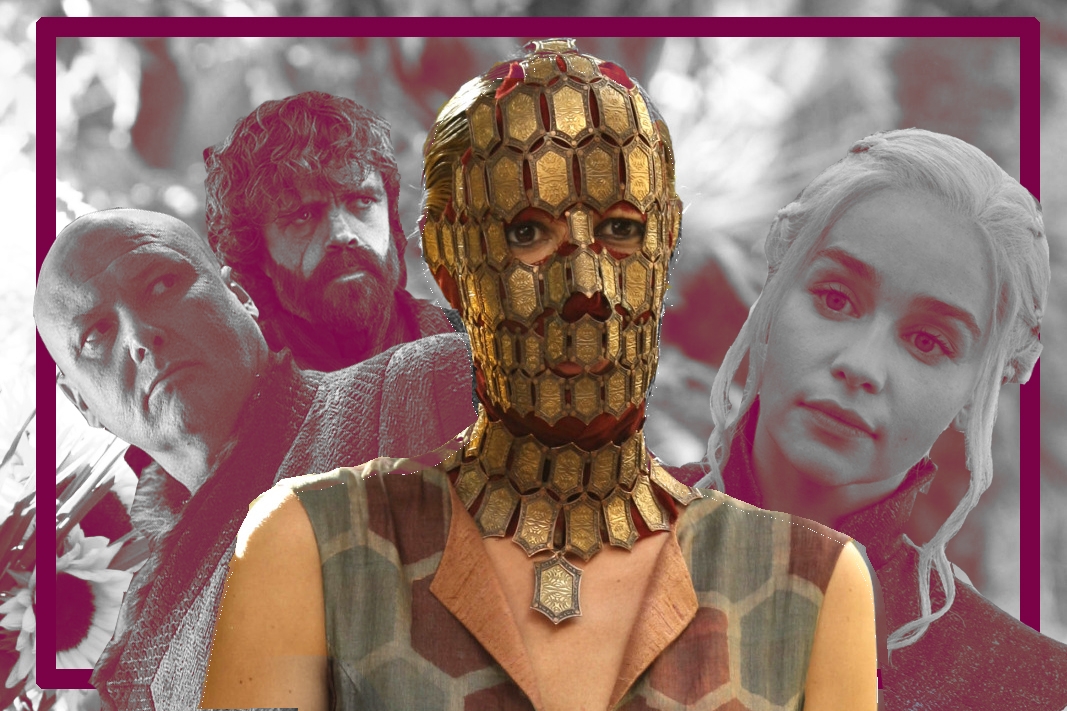 If you’re seriously NOT caught up with Game of Thrones yet (seriously?!?!?), a warning: Season 8 spoilers ahead.

Game of Thrones is about to end! Who will ascend the throne? Will it be the Mother of Dragons, Daenerys Targaryen? Or will it be someone else? Will anyone still be alive by the time the final credits roll?

There are so many theories — crazy theories! — afoot about what will happen and how the show will end. But there’s a very prescient theory making the rounds that recently caught our eye: There’s a good chance that a seemingly minor character from Season 2 may have alluded to a really crucial plot point leading up to the finale.

OK, here goes: In the second season of the hit series, a prophecy is delivered by Quaithe, the masked shadowbinder from Asshai. Just why are you reading about this in Kveller, you ask? Is there a Jewish angle here? Yes, there is!  Quaithe is played by the German Jewish actress Laura Pradelska, who made the news earlier this year after she was targeted online by anti-Semitic trolls, leading her to disable her Instagram comments.

According to the BBC, many of the negative comments Pradelska received were related to her Jewish heritage, and “my skin wasn’t thick enough to take it,” she said.

“I’m third generation, and I’m concerned fourth and fifth generations won’t know, won’t remember, and won’t meet survivors,” she once said. “These stories are what help shape us as Jews, this is who we are.”

Pradelska’s appearance on Game of Thrones may have been brief, but her words were powerful. On screen in Season 2, Quaithe had some meaningful exchanges with Daenerys’ protector, Ser Jorah Mormont — she makes sure that Jorah never betrays his queen again, and she helps him find one of Dany’s stolen dragons (this is back when the dragons were small enough to steal, of course).

However, Quaithe’s most important foreshadowing prophecy — discovered by Time’s Megan McCluskey — does not appear in the show, but rather the book A Dance With Dragons, the fifth in the Song of Ice and Fire series by George R.R. Martin, upon which the HBO show is based. Here, Quaithe tells Dany: “Soon comes the pale mare, and after her the others. Kraken and dark flame, lion and griffin, the sun’s son and the mummer’s dragon. Trust none of them. Remember the Undying. Beware the perfumed seneschal.”

The perfumed seneschal is likely referring to Varys, the eunuch adviser played by Conleth Hill. Of course — spoiler alert!  — that prophecy turns out to be right, as in Season 8 Episode 5, “The Bells,” Dany sentences Varys to death by dragon flame, after she learns of his desire to put Jon Snow on the throne.

But this is just the tip of the iceberg… Could the white mare reference forsehadow Arya’s recently acquired white horse? After all, there’s a biblical (um, New Testament) reference to the “pale mare” — it is the horse on which death, one of the four horsemen of the apocalypse, rides on.

Will Arya be Daenerys Targaryen’s personal horseman of death? If so, this must surely mean the prophetic kraken must be Euron Greyjoy, who killed one of the dragons, right? So is Tyrion the lion that Quaithe is referring to? Is he about to betray the queen in an epic way? So many questions, so little time to answer them in one measly final episode!

As it happens, Quaithe isn’t the only character played by a Jewish actress who predicted the ending of the GoT saga. Kinvara, a priestess of the Lord of Light (played by Israeli actress Ania Bukstein), predicted in Season 6 of the show that Daenerys Targaryen’ dragons, whom she claims are a tool of the Lord of Light, will “purify non-believers by their thousands, burning their sins and flesh away.”  Hmm… does that remind you of a certain brutal scene from that latest Thrones episode? Sure does!

So, yeah, we really got into the weeds here. But what can we say? We are serious about our Game of Thrones! And we truly can’t believe our years-long journey with the Starks, the Lannisters, and the Targaryens is about to draw to a close.

But all is not lost. While the series may soon be over, it will always remain in our hearts — and we can always give our children a Jewish baby name inspired by our favorite character.