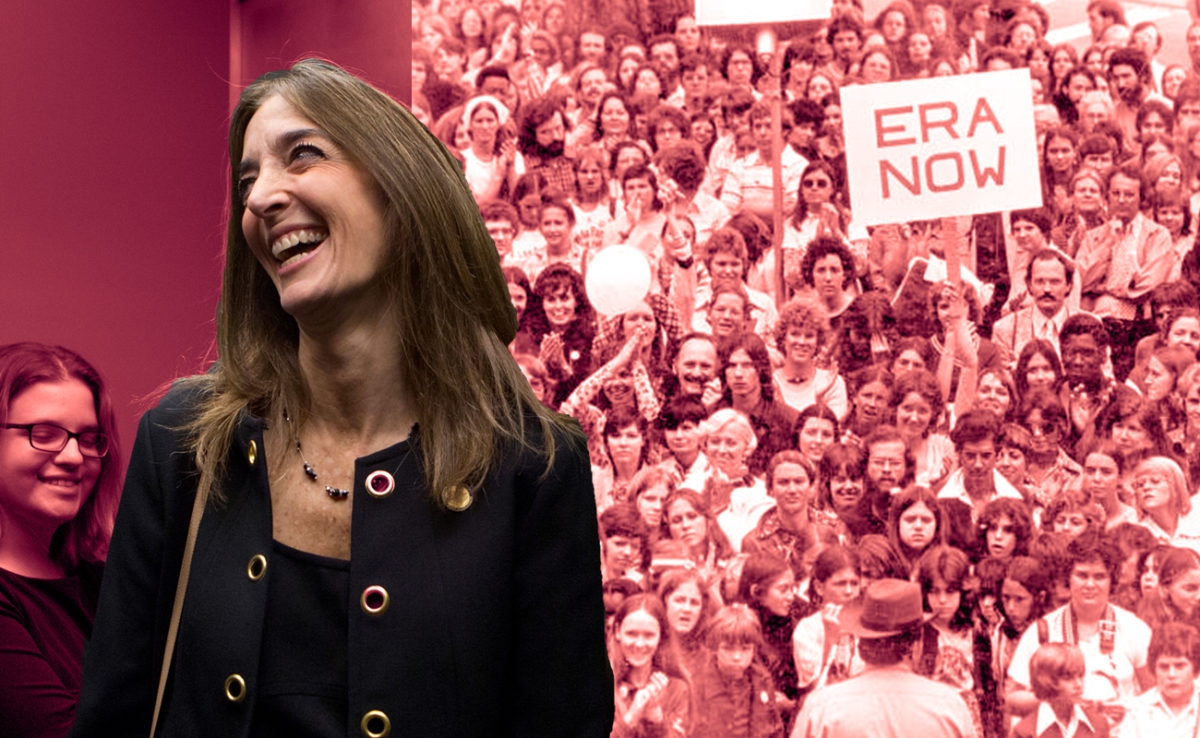 What a week it’s been for Virginia!

Following Election Day, for the first time since 1994, Virginia’s state government is controlled by Democrats. In fact, the Democratic Party controls both houses of the Virginia General Assembly, flipping two seats in the state Senate and at least five seats in the House. In addition, the state also has a Democratic governor (Ralph Northam, who was elected in 2017).

There are many things for Democrats to celebrate in Old Dominion. For example, Virginians elected the first Muslim woman to the state Senate, Ghazala Hashmi. Also, Juli Briskman, the woman who flipped off Trump’s motorcade, went viral, and subsequently lost her job, was elected to her county’s board of supervisors.

But that’s not all!

This exciting news follows a path Filler-Corn has been on for a while: On January 1, 2019, she became Virginia’s Democratic Caucus leader, becoming the first time in the state’s 400-year history that a woman has held that role. She was also the first Jewish leader and the first mom in that role.

“I’ll tell you, there has been an outpouring of excitement and energy around that,” Filler-Corn told The Washington Post. “Everyone is just kind of surprised to think that it’s taken so long.”

Filler-Corn, 55, was born in New York City but now lives in Virginia (obviously). She’s on the Board of Directors for the American Jewish Committee (AJC), Clean Air Partners, the Center for Public Policy Innovation (CPPI), the Fairfax County Arts Council and Jewish Foundation for Group Homes (JFGH). She and her husband have two children.

Although she’s not super active on social media, she clearly has a good sense of humor:

Here is a new constituent I met this morning at another great canvass in the 41st district.

Just why does Filler-Corn’s acendancy — alongside the other Democrats’ victories — matter? Well, Virginians can expect a lot of exciting things from Democrats being in power in Virginia. Among them: a $15 minimum wage, gun reform, and — this one’s a biggie — they could become the 38th state to ratify the Equal Rights Amendment, bringing the fight to amend the U.S. Constitution to the Supreme Court.

The Equal Rights Amendment (ERA) was passed by Congress in 1972. It read, “Equality of rights under the law shall not be denied or abridged by the United States or by any State on account of sex.” At the time, only 35 states ratified the amendment, falling short of the 38 state minimum to add the amendment. (Also? It was first proposed way back in 1921. We’re only 98 years late…)

In 1973, Ruth Bader Ginsburg argued the necessity of the ERA, writing, “The equal rights amendment, in sum, would dedicate the nation to a new view of the rights and responsibilities of men and women. It firmly rejects sharp legislative lines between the sexes as constitutionally tolerable. Instead, it looks toward a legal system in which each person will be judged on the basis of individual merit and not on the basis of an unalterable trait of birth that bears no necessary relationship to need or ability.”

In 2017, Nevada ratified the ERA, and in 2018, Illinois followed suit. And now, Virginia is poised to become the 38th state. “If we get it to the floor and let people vote, then it will become law,” Virginia’s governor Ralph Northam told reporters. “Virginia will be next in line to pass the ERA.”

Since the deadline to ratify has expired — it’s complex, we’re not gonna get into it — Virginia passing the ERA will set up a constitutional fight, and it will likely go to the Supreme Court.

This. If VA ratifies the ERA, the House can lift the deadline. Then it's on the Senate. McConnell could ignore it, but it's one thing to ignore a House-passed bill – it'll be several orders of magnitude different to stand in the way of the passage of the Equal Rights Amendment. https://t.co/jpXmFzXiJE

As Filler-Corn posted on Instagram a week before the election, “VA has the opportunity to be THE state to make the Equal Rights Amendment reality. With the Dems in charge, we will make it happen! Help us do that.”

We can’t wait to watch her — and Democrat-controlled Virginia — in action. Mazel tov, Eileen!

Image of Eileen Filler-Corn in header by Julia Rendleman for the Washington Post; of ERA protest via State Library and Archives of Florida/Wikimedia Commons.