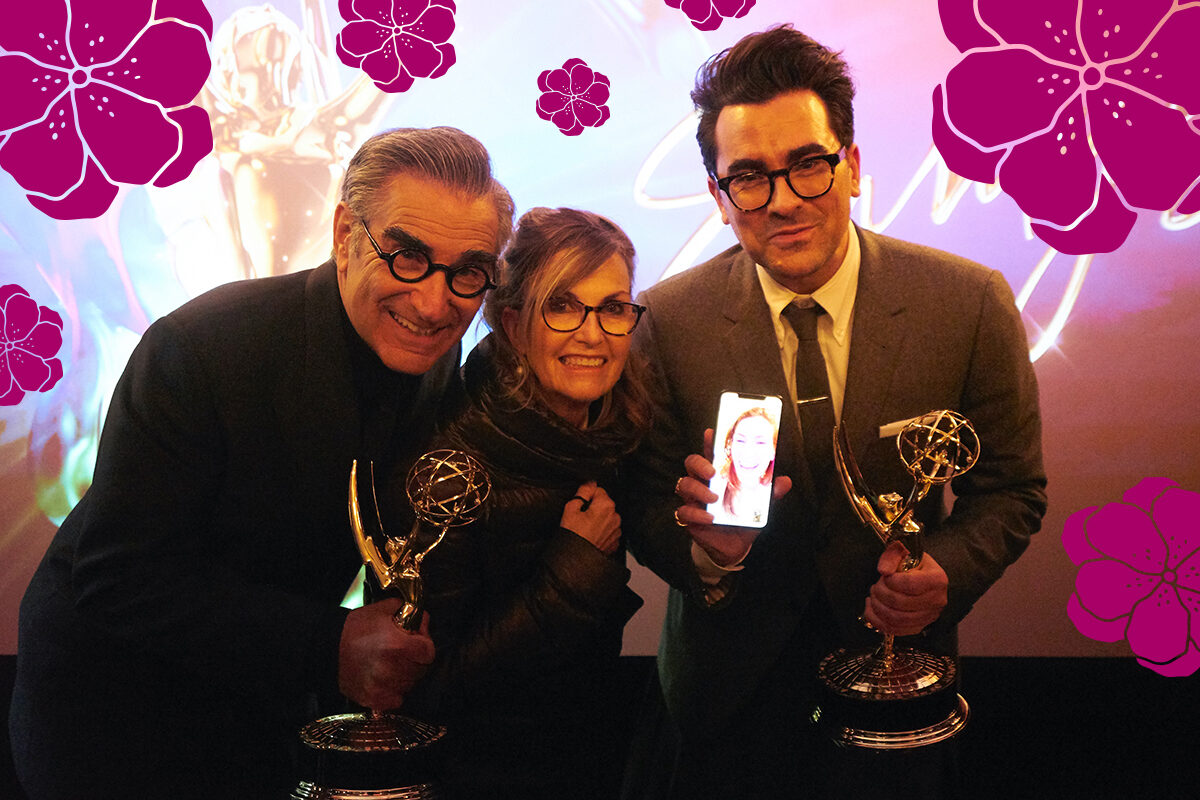 Schitt’s Creek, the delightful, haimish show about a Jewish family that goes from riches to rags and moves into a motel in the titular, fictional Canadian town, is the perfect pick-me-up show to binge when the whole world feels like it’s falling apart. It’s loving, warm, and uplifting.

And it seems like this year’s Emmy Award judges agree: They just awarded the series, which unfortunately wrapped its sixth and final season, a whopping seven awards this Sunday night — and nine awards in total. In doing so, they made the big winners of the night the dynamic, Jewish father-and-son duo Eugene Levy and Dan Levy.

Dan Levy, 37, personally won four awards, but the series — which was developed by Dan and his father — went on to make Emmys history in a lot of incredible ways, including the most awards for a show in a single year. (Incredibly, Schitt’s Creek had never won any Emmys before! Some credit the pandemic for the sweep —  it’s likely that many judges were stuck at home watching Netflix like the rest of us, and they finally watched the show!)

As it happens, Schitt’s Creek beat out the previous record, set by the very Jewish Amazon Prime series The Marvelous Mrs. Maisel. It also was the first show to ever sweep the comedy acting category, and winning all four comedy acting awards. Dan Levy was also apparently the second person to ever win an Emmy for acting, writing, and directing for the same show — the first was Alan Alda for M*A*S*H. (Fun fact: Alda isn’t Jewish, but he is married to a Jew and does have Jewish children!)

Alllllllll the mazels to Dan Levy for his well-deserved wins. And yet, as a Jewish parenting website, we have to say that the biggest winner of the night was proud papa Eugene Levy, 73.

First of all, he got his first acting Emmy award of his career, for a role in which he worked closely with his son and daughter — his daughter, Sarah Levy, plays the wonderfully lovable waitress Twyla in the show. Sarah could not attend the Emmy viewing party, so Eugene shouted a “hi, honey!” to her as he gave his acceptance speech for Best Actor in a Comedy Series.

Eugene and Dan, coincidentally, also made history as the first father-son duo to win an Emmy for the same show in the same award year. Seriously! So much history!

“As a dad, getting to work on camera for six years with both my kids, Daniel and Sarah, I had such a joy,” Eugene said in his acceptance speech. “I love you both and could not be prouder.”

But also, he got to kvell about his son’s many many achievements, watching him win award after award. As Jewish parents, there’s nothing we love more than seeing our children accomplish incredible things.

He ended a speech with an ode to his son and collaborator: “And that brings me to my multi-Emmy-nominated partner, Daniel Levy, who took our show that we came up with and brilliantly guided it to this little Emmy party tonight, so thank you, son.”

The younger Levy also thanked his father during one of his three acceptance speech that night.“First of all, I just want to say thank you to my dad for giving me the reins to this show, even though I didn’t have any experience in a writers room — which, saying that out loud right now, feels like a wild choice on your part — but I am very grateful for it,” Dan said. “I wouldn’t be here if it wasn’t for you.”

And Eugene also got to go full circle with his long-time collaborator, Catherine O’Hara, winning an Emmy together again — the two won an Emmy for best writing for SCTV Network 90 in 1982.

“I’ll forever be grateful to Eugene and Daniel Levy for giving me the opportunity to play a woman of a certain age, my age, who gets to be fully her ridiculous self,” O’Hara, who played matriarch Moira Rose, said when accepting her award for Best Actress in a Comedy Series.

The lovable, fictional Rose family obviously has quite a bit in common with the real family behind (and in) the scenes of Schitt’s Creek. Not only is the Levy family also a family of four, but just like Johnny and Moira Rose, Eugene and his wife of 43 years, Deb Devine, are also an interfaith couple — Eugene was born to a Jewish family in Hamilton Ontario.

And judging from her Twitter, the Levy family matriarch is just as fabulous and admirable as Moira Rose:

Today I regret every single second of worry back in the uninformed 80’s-wondering how the world was going to treat my brilliant little boy who loved to twirl. Little did I know that he was going to kick that old world’s ass to the curb and create a brand new one.@danjlevy ❤️❤️

And most important of all, just like the Rose family, at the end of the day, these four just really truly love each other — in a way that really melts your heart.

As one can witness in this adorable photo of the Levy family:

when @sarahlevy_ can't make it to the #Emmys event pic.twitter.com/SWKLRJjKDK

Also well worth a watch are Sarah’s incredible reactions when she saw her brother and father win all the awards:

Last night happened so that this montage of my sister’s reactions could exist. Love you, @sarahlevy_ . Wish you could have been there with us…but this is almost better? Thanks for capturing it @outerbridge_g. 😂 pic.twitter.com/qKCIcdZtjj

We love this show and this family. Mazel tov, Levys!