‘The Marvelous Mrs. Maisel’ Is Actually About My Jewish Family – Kveller
Skip to Content Skip to Footer

‘The Marvelous Mrs. Maisel’ Is Actually About My Jewish Family 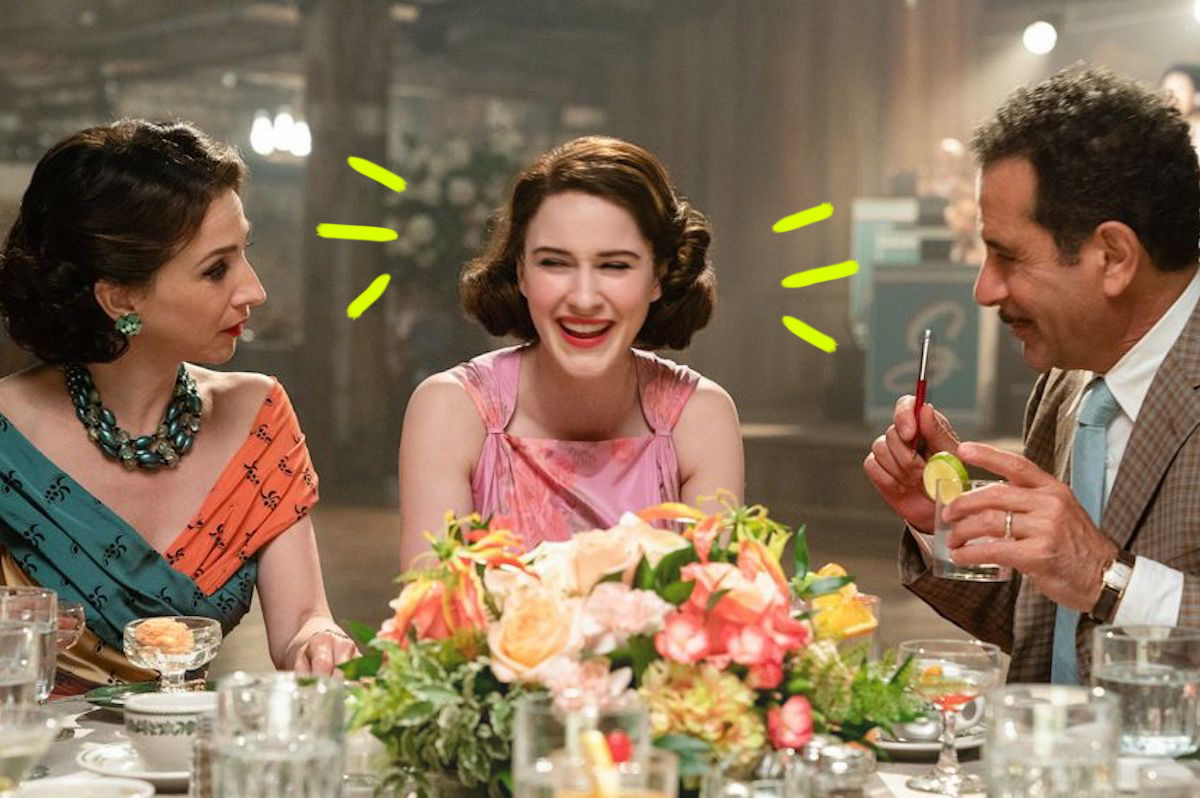 When I was a baby, my maternal grandmother was the one who looked after me while my mother finished her medical school residency. Despite having years of quality time together, I think one of the moments I felt closest to her was when I watched Season 1, Episode 4 of The Marvelous Mrs. Maisel.

In that episode, Rose Weissman, the titular Mrs. Maisel’s mother, gets out of bed to perform an elaborate nighttime routine. She puts her hair in clips, ties it up in a scarf, and slathers on her face a thick layer of undoubtedly expensive cold cream, all while wearing a beautiful nightgown.

Like Rose, my grandmother is an unfailingly elegant woman, even in her late 80s. I’ve watched her perform the same nighttime ritual throughout my whole life, coupled with a lengthy morning makeup routine that can never be shortened or skipped. As a relatively lazy groomer myself — I’ve even had my eyeliner tattooed on to save 20 minutes a day — I’ve always been confused and even annoyed by her ministrations. Many times I’ve begged her to please hurry up or just skip it — telling her she looks beautiful as she is, especially when I only had an hour or two for a visit. But she never wavers. There’s lip liner and lipstick and mascara and eyebrow pencil and expensive French luxury cold cream, and nothing less. She favors red nail polish, like Midge and Rose.

When I realized that Rose had been slathering on her cold cream for about three decades — and that my grandmother had been keeping up her real-life routine even longer — I wanted to cry. I realized this was not just a quirk of my grandmother’s but something that she had probably been taught by her mother. I felt the weight of the minutes she’d devoted to this daily task — adding up to years over her lifetime — and understood that I could undo neither the lesson nor the time spent. So, I decided not to make it something we argued about anymore.

The next time I visited her, I dressed up. I wore red, wide pleated trousers and heels (a trademark of my grandma’s). I wore jewelry and put on a full face of makeup, even lipstick. It was an uncomfortable few hours of traveling from London (with a pit stop in Reykjavik to run a personal best marathon the day before), but I was rewarded. When I arrived at my grandmother’s home on Manhattan’s Upper West Side, she touched my trousers gently and said, “So elegant! Look, look!”

When she held her hand out to me, we saw that we were wearing identical shades of blood-red nail polish, which she pointed out to my sisters with glee. I kept my satisfaction quiet. Before I left, she gave me some of her prized jewelry: a set of seven gold bangles her father bought her in Israel in 1966. “Wow, she gave you the bangles,” said my mother in a tone heavy with significance when I opened the little quilted pouch.

Jews around the world have debated the accuracy of The Marvelous Mrs. Maisel, but, honestly, for me, it rings so true. And recently, when I visited my non-Jewish boyfriend’s family in Dorset, England, for Christmas, I rewatched the series with him as a way to introduce him to Jewish culture. I chose it because I felt like a fish out of water and I was craving a little bit of home. Also, I wanted to reciprocate the way he was letting me get to know him — meeting so many members of his family and spending a week with them — while my family was back in New York. Screening The Marvelous Mrs. Maisel for him felt like nearly the same thing as spending time with my family — after all, my last name is Maisel, too! But as I pressed play, I felt surprisingly nervous, as if I was maybe revealing something that should be kept private, like when a teacher intercepts a note and reads it aloud to the whole class.

It may seem odd that Rose Weissman could remind me so much of my grandmother, a woman whose parents were Sephardic Jews from Aleppo, Syria and who raised two of her children in Havana, Cuba. And yet there’s a deeper truth to her character that makes her — and so many other Mrs. Maisel characters — feel so real to me. It’s in their facial expressions, the things that matter to them, their beliefs, and their mannerisms. The extended (fictional!) Maisel clan are people I know, for better or for worse.

In that same episode in the first season, there’s a moment when Midge comes home late. When she walks into the room, Abe and Rose scare her because they’re just sitting there, in the pitch dark. I laughed so hard at this scene that I could only point at the screen for a few moments.

“What?” my boyfriend asked, genuinely confused.

Eventually, I explained that my grandmother actually does that: she sits or lies down in dark rooms, staring into the middle distance, so when we eventually find her we are a) scared and b) feeling guilty we left her there for so long. (For how long, exactly? Who knows!).

I looked at my boyfriend’s face for a reaction. He seemed amused. “I didn’t know people actually did that in real life,” he said mildly.

Rose, like my grandmother, is superstitious — Rose visits a fortune teller and patently tries to get the fortune she wants to hear. My grandmother has, throughout her life, claimed to be a witch; this is not something she thinks is incompatible with Judaism. When I was a child, she would scare my sister and me by telling us she’d make two china dolls with curly hair like ours — one brunette, for me, and one blonde, for my sister – hold hands so we’d get along. She’d tell us she could see the future and (less impressively) the past.

Season two opens with the holiest day of all for the Jewish people: Yom Kippur. I found the show’s portrayal of the Day of Atonement incredibly accurate; the amusing but hostile bickering of unfed Jews, the congregants beating their chests during the Ashamnu. Watching this among my boyfriend’s non-Jewish family, I felt almost as if the New York synagogue of my childhood was transported to England.

I felt both pleased and oddly exposed. But it was nice to have Midge take over the Yiddish lessons for a while, and my boyfriend asked thoughtful questions. In a way, it reminded me of the time in elementary school when there was another girl named Remy in my class — a startling reminder that there are others out there.

But it’s not just Rose who reminds me of my family. There’s also Moishe Maisel, who is reminiscent of my paternal great-grandfather, who was born in Russia. My dad’s side has always been a little more of a mystery to me than my mother’s side. I wasn’t especially close to my paternal grandparents, who my family acknowledges were a little emotionally distant, and they passed away a few years ago.

Still, there’s a legendary story about my great-grandfather that goes like this: Pappy Louis was unable to speak English when he came to the U.S. But he could read “Help Wanted” signs. When he saw one in a shop window at a tailor on the Lower East Side, he went inside and asked for the manager. They asked my great-grandfather if he knew how to use a sewing machine and he lied and said “yes.”

Incredibly, this worked out for him, and eventually, he built himself a little empire – his own ladies’ leisurewear line. So that’s how my paternal great-grandmother — who was literally a Mrs. Maisel — had a Moishe her life, too.

It can be a little uncomfortable to look in the mirror for too long, and that’s how I feel sometimes when I watch Mrs. Maisel. But I love her, and I love the show — even though they pronounce “Maisel” wrong. For the record, it’s “may-ZELL!”