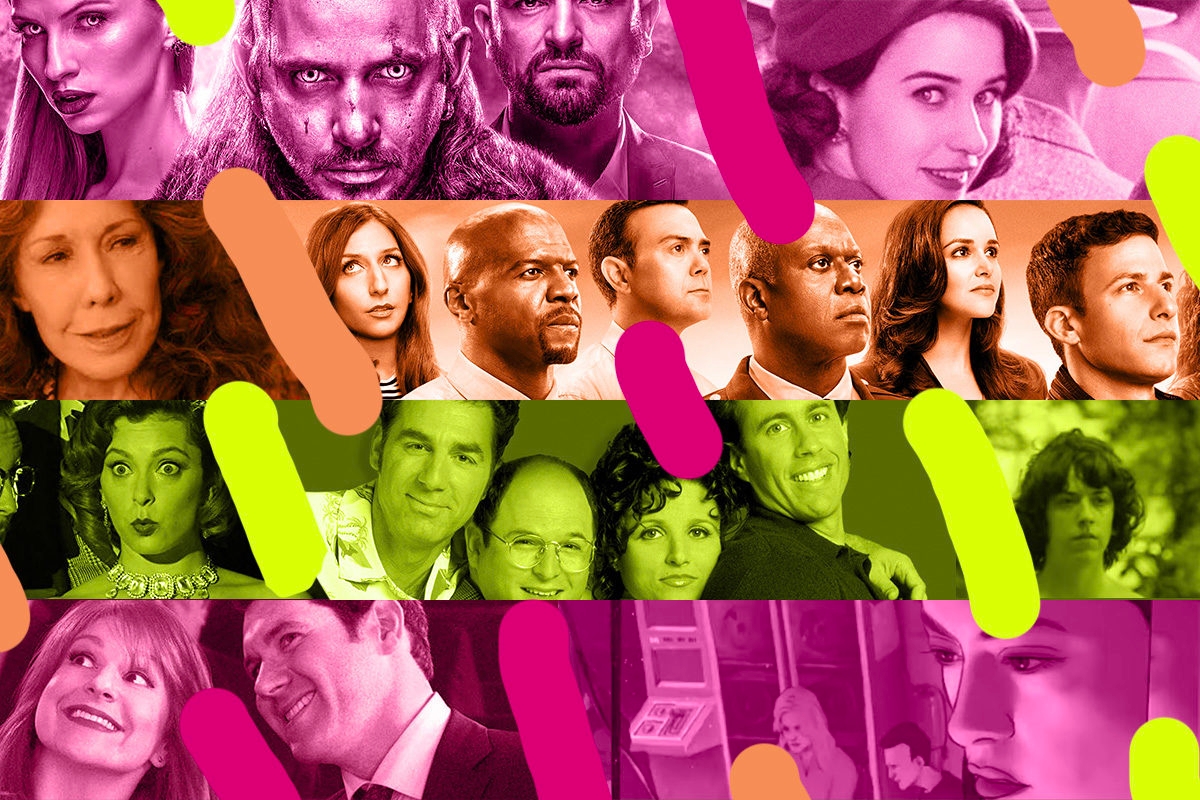 Editor’s note: This piece was originally written in March 2020, at the beginning of the Covid-19 pandemic. No matter where we are in the pandemic today, we feel this piece continues to remain relevant, as everyone is always looking for quality shows to binge!

With the coronavirus outbreak raging across the U.S. and around the world, many in the Jewish community are under quarantine or, at least, practicing some serious social distancing (something this introvert has been practicing for a while now!). This means that, until the pandemic dies down, a lot of us will be stuck at home.

Good thing we have TV to keep us from panicking and/or getting bored out of our minds! Luckily streaming platforms are full of Jewish and Jew-ish TV shows that are well worth a binge watch, and a lot of them are pretty long — there’s enough to keep you entertained for weeks.

Whether you want to catch up on some tried-and-true classics or discover something new, we’ve compiled a list of the perfect TV to watch in the time of the coronavirus.

Skip to any of these categories:
Fan-favorites to catch up on
Funny distractions
Something different
Something a little more intense

Fan-favorites for you to catch up on:

Great if you’re looking for: a show that literally everyone has been telling you to watch — and for good reason. It’s also great for ogling at Michael Aloni (his pretty face and acting talent are sure to help assuage any coronavirus-related anxiety.)
It’s about: an Ultra-Orthodox family in Jerusalem and the drama and intrigue in their lives. Check out our review of Shtisel. Just watch it already!
How Jewish is it? It’s the most Jewish.
How long? Two seasons — although season 3 begins shooting this year, barring any interruptions from coronavirus.

Great if you’re looking for: two cool and complex ladies doing it for themselves.
It’s about:  Grace (Jane Fonda) and Frankie (Lily Tomlin), who face a new reality after their husbands leave them and become a couple. The two women are very different — Grace is uptight and WASPy, Frankie is a Jewish hippie — and yet their friendship helps them pick up the pieces of their lives and start anew — showing that it’s never too late to start living your best life. This show is a modern classic!
How Jewish is it? Tomlin plays Frankie Bergstein, a hippie type who still raises her family with Judaism..
How long? Six delightful seasons, baby!

Great if you’re looking for: a show that’s amazing at tackling mental health — in song.
It’s about: Rachel Bloom plays Rebecca Bunch, a successful New York lawyer who experiences a quarter-life mental crisis and moves to West Covina, California, to follow her summer-camp crush, Josh. This musical comedy can be incredibly incisive when it comes to mental health, overbearing Jewish mothers (played by Tovah Feldshuh), and even childbirth.
How Jewish is it? “Remember that We Suffered” is basically the best Jewish song ever.
How long: Four perfect seasons.

Great if you’re looking for: the TV equivalent of a bright ray of sunshine.
It’s about: The Rose family’s riches to rags story. After losing all their worldly possessions, they move into the only place they still own, a rural Canadian town by the name of Schitt’s Creek. Dan Levy and his father, Eugene Levy, created and star in this thoroughly charming, funny, and witty show.
How Jewish is it? The Rose family patriarch, Johnny (played by Eugene Levy), is Jewish, and the interfaith nature of the family is addressed. Also, there’s an episode about bagels.
How long? Five glorious seasons are now available on Netflix!

Great if you’re looking for: retro 1960s fashion, snippy Gilmore Girl-esque dialogues, and jokes about brises.
It’s about: Plucky Midge Maisel, a young housewife turned comedian. We’ll keep this simple because we bet you’ve already seen it; now’s a perfect time for a re-watch!
How Jewish is it? Perfect deli order-level Jewish.
How long? Three seasons.

Great if you’re looking for: a show about nothing.
It’s about: Let’s face it, you know what Seinfeld is about. But we just wanted to remind you that all the seasons of Seinfeld are available to binge on Hulu, like they were just waiting for a global pandemic.
How Jewish is it? It’s Seinfeld, sheesh.
How long? Nine friggin’ seasons.

Great if you’re looking for: a fun but woke police comedy. Also good for ogling Andy Samberg.
It’s about: a group of cops in Brooklyn mostly just trying to do their best. Jewish mom Chelsea Peretti plays a badass secretary, and Jewish father Andy Samberg stars as immature but gifted detective Jake Peralta.
How Jewish is it? Samberg’s character is openly Jewish and makes some great Jewish jokes.
How long? Seven seasons.

Great if you’re looking for: the Israeli version of Brooklyn 99.
It’s about: an Israeli cop whose family is not exactly the most law-abiding type. The show grapples with Israeli macho culture and is also funny and heartwarming.
How Jewish is it? It’s about an Israeli police precinct.
How long? Just one season is currently available for streaming.

Great if you’re looking for: two professional Jewish kvetchers finding the just-right balance between irritating and loveable.
It’s about: Julie Klausner and Billy Eichner — who are both Jewish IRL and in the show — play two best friends in New York. Their critical, Larry David-like critical banter is balanced by their mutual admiration and amazing onscreen chemistry.
How Jewish is it? Eichner brings his very Jewish upbringing into the show. Jackie Hoffman plays his Orthodox Jewish sister and Fred Armisen plays her husband. Honestly, it’s very, very good.
How long? Three seasons. We’re so sad this show was canceled.

Something a bit different:

Great if you’re looking for: a road-trip show, ladies in their 20s finding themselves, and hot Mexican guys and girls getting it on.
It’s about: Three BFFs from Mexico City go on an impromptu road trip to Oaxaca, and end up being intercepted by a local who is escaping her own fraught family situation. This show can be a bit gratuitously male gaze-y at times, but it’s also filmed at Mexico’s beautiful coast.
How Jewish is it? One of the show’s protagonists, Carlota, is Jewish, and almost misses the epic road trip because of Yom Kippur.
How long? One season.

The House of Flowers (Netflix)

Great if you’re looking for: a telenovela-type show that’s fun, smart, and progressive.
It’s about: a rich family that owns a flower shop but is hiding a dark secret. It’s a queer, romantic, and beautifully crafted show.
How Jewish is it? There is a Jewish psychiatrist character, played by Jewish Mexican actor David Ostrosky. The show features a bar mitzvah and Jewish funeral rituals. Yay for Mexican Jews!
How long? Two seasons and one special.

Great if you’re looking for: a superhero show, turned upside down.
It’s about: a group of vigilantes called the Boys fights to unmask a group of superheroes who are not as super or as kindhearted as they seem. Israeli actor Tomer Kapon plays one of the Boys, Frenchie. This show is very gory but also very exciting.
How Jewish is it? Not at all, except for Tomer Kapon.
How long? One season.

Great if you’re looking for: something completely different and very wacky.
It’s about: When Josh Futturman (Josh Hutcherson of The Hunger Games), a janitor, beats the unbeatable “Bionic Wars” videogame, the game’s two main characters come to life and recruit him on a time-travel mission to save the future. Everything about this show is ridiculous and feels like it shouldn’t work —  yet somehow it does. The writing is just funny and the show doesn’t take itself too seriously.
How Jewish is it? Not Jewish at all, but it has two very famous Jewish executive producers, who also directed part of its first season: Seth Rogen and Evan Goldberg.
How long? Two seasons.

If you’re looking for something a little more intense:

Great if you’re looking for: high school meets Mad Max.
It’s about: a teen who is trying hard to survive in a post-apocalyptic world where all the adults have been wiped out, and fitting in with the right clique turns into a literal game of life and death. This show is on this list because it takes something truly unique to get Jewish dad and actor extraordinaire Matthew Broderick to star in your work — he plays a  villain in this very unique show. While a post-apocalyptic show may not be your jam right now, I’d argue it’s worth watching just for his truly incredible performance!
How Jewish is it? Broderick’s character actually has a good Jewish joke or two!
How long? One super eclectic season.

Living With Yourself (Netflix)

Great if you’re looking for: Paul Rudd. Which, let’s face it, who isn’t?
It’s about: Paul Rudd vs. Paul Rudd’s clone in a weird and very bingeable show about aging and relationships. Aisling Bea plays Rudd’s wife and is another highlight.
How Jewish is it? Well, there’s Paul Rudd, and there’s also a very weird Holocaust scene.
How long? One snappy and bewildering season.

Great if you’re looking for: a trippy and intense historical show set in Germany.
It’s about: a WWI veteran turned police detective and his female partner investigate crimes and uncover conspiracies in this breathtaking neo-Noir show that takes place in late 1920s Berlin. This show is truly a masterpiece, but it’s not exactly easy to watch.
How Jewish is it? Only one character in the first two seasons is overtly Jewish. Police chief Benda is based on real-life Jewish VP of the Berlin Police during the Weimar Republic, Bernhard Weiß.
How long? Three trippy seasons.

Great if you’re looking for: an over-the-top dark comedy about Nazis and Nazi hunters.
It’s about: a group of Nazi hunters in 1977 New York, starring Logan Lerman, Al Pacino, Josh Radnor, and Carol Kane. Hunters is definitely not for everyone, but, despite being a work of exaggerated and shocking fiction, it does bring to light some amazing true stories about the Holocaust.
How Jewish is it? Some would say too Jewish and not Jewish enough.
How long? One very long and very intense season.

Great if you’re looking for: a snappy critique of reality TV culture.
It’s about: Jewish mom Shiri Appelby stars as Rachel Goldberg, who’s a producer on the fictional reality TV show Everlasting. She’s an incredible Jewish antihero.
How Jewish is it? Pretty Jewish! Rachel is a super Jewish character, and Yael, one of the contestants on Everlasting, is also a member of the tribe.
How long? Four seasons.

Great if you’re looking for: an animated show that will blow you away.
It’s about:  Alma, a woman in her late 20s, who is sick of the monotony of her daily life. A car accident upends her life, and leads her into an exploration of space and time with her head Jewish father (played by Bob Odenkirk) as her guide. This amazing show about mental health and quantum physics is one of the most brilliant shows I’ve ever seen.
How Jewish is it? Just a little.
How long: One awe-inspiring season, but it’s been renewed for a second!