Finally, a Queer Jewish Character on an Animated Kids Show 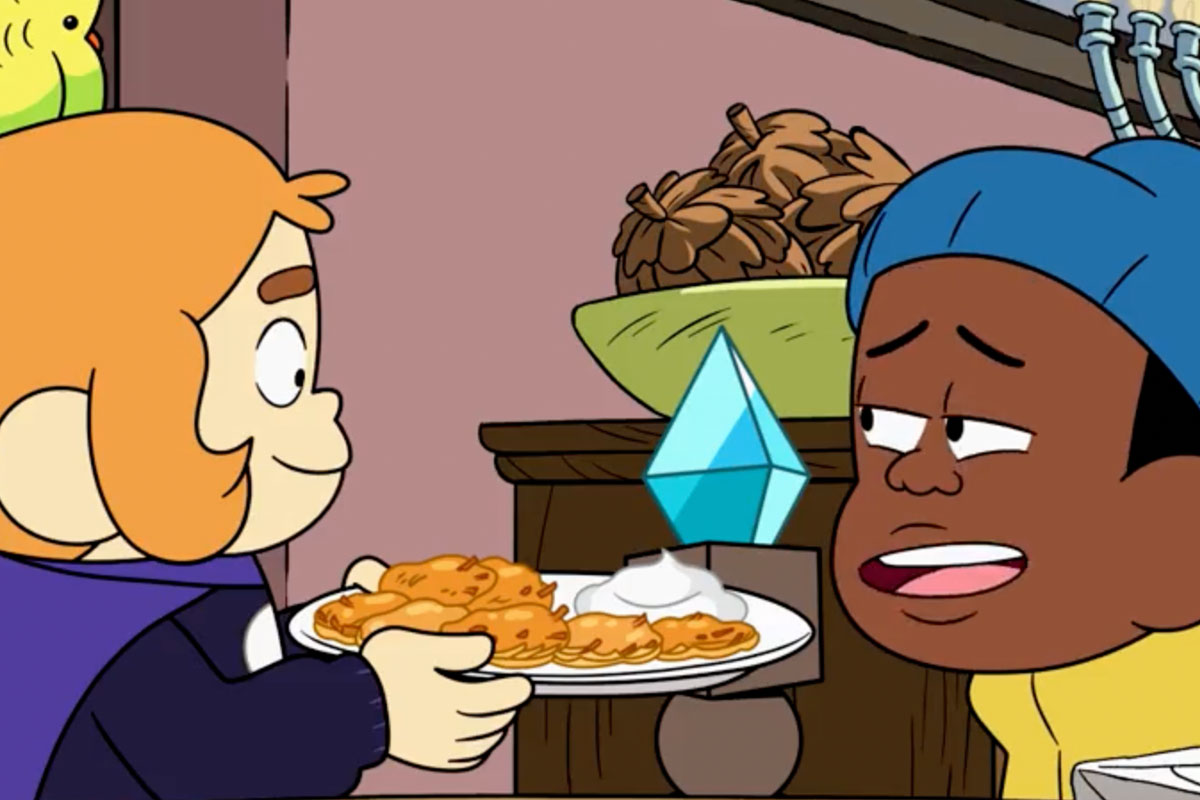 When I was a kid there weren’t many cartoons with characters like me — at least characters who were queer and Jewish like me. Don’t get me wrong, I grew up with a lot of great animated shows like “Teen Titans” (the original), “Avatar the Last Airbender,” and “Arthur” (which had Francine Frensky, one of the best Jewish characters on TV!). But most of the time you wouldn’t even know a character was Jewish until the occasional Hanukkah reference (which often took place inside the Christmas special, sigh). And forget about LGBTQ+ representation.

While today we have made strides in Jewish and queer representation, the former as seen in Jewish characters like Libby Stein-Torres from “The Ghost and Molly McGee” and the latter thanks in part to the efforts of queer animators such as Noelle Stevenson (“She-Ra and the Princesses of Power”), Dana Terrance (“The Owl House”), and (Jewish!) powerhouse, Rebecca Sugar (“Steven Universe”), there is still a lack of characters who share that sweet intersectional spot of Jewish and queer.

Luckily, that all changes with Kelsey Pokoly from “Craig of the Creek.”

Set in the fictional suburbs of Maryland, Cartoon Network’s “Craig of the Creek” (created Matt Burnett and Ben Levin) follows a set of kids who play in the woods, living their childhood dreams of building tree forts and riding dirt bikes while making friends and having fun along the way.

One of the main characters of the hit animated series, Kelsey, is a feisty Hungarian-Jewish American 9-year-old redhead with a thirst for adventure and fantasy. Accompanied by her best friends, Craig, JP and Mortimer (her adorable bird companion that rests on top of her hair), Kelsey is the first to be ready for battle with her PVC pipe sword and endless bravery.

From the get-go, Kelsey had my heart. As a kid who loved stories, I adored her passion for books, especially fantasy stories, and empathized with her love (and struggles) to write her own stories. I also loved her loyalty to her friends. Upon learning she was Jewish, as seen in episode season one episode 22 “Doorway to Helen,” in which she references her “bubbe” and is seen celebrating Hanukkah with Chinese food and latkes (which yum!) — along with Mortimer sporting a kippah — I fell in love with her all the more.

Throughout the series, hints of Kelsey’s sexuality had been noticed, from her disinterest in boys (as seen in season two episode 24 “Tea Timers’ Ball”) to her close relationship with fellow bookworm, Stacks, aka Isabella Alvarado. Many fans, included myself, noticed their wonderful chemistry together, bonding over speculative fiction and in general just being very cute together. However, while the show had featured other minor supporting queer characters (all of whom are refreshingly complex and untokenized) I had my doubts over whether or not the show would confirm these two as queer, much less as a couple.

But that all changed with season four, episode 10 “Fire and Ice.” In the beginning, we see the two girls absorbed in the fantasy world they’re co-writing for their book club, self-inserting themselves as the characters, Fire and Ice. While battling dragons, Fire (Kelsey’s persona) declares to her companion Ice (Stacks’ persona), “You’re the one I long for by my side.” While the rest of the kids of the creek love their story, a few off-hand comments from friends suggesting that Kelsey and Stacks resemble Fire and Ice quickly throw Kelsey into a gay-panic. She then proceeds to ghost Stacks, because the intensity of the way she feels for her is scary.

Which is completely relatable.

When you’re young and just beginning to understand your queerness (or heck, when you find yourself being romantically attracted to someone for the first time regardless of your sexuality) everything is completely overwhelming. And when you’re surrounded by media and relationships that are mostly of the heteronormative variety, that realization becomes even more jarring. When bigots complain about all-ages queer media being inappropriate for younger audiences, stating that kids are “too young” to be exposed to such material, they erase the reality of kids who already know they are LGBTQ+ or haven’t come out yet.

All-ages queer media is so important because it helps teach these kids that they are not alone in their identities or feelings, that who they are is completely fine and natural. As a queer adult who didn’t have this kind of representation growing up, part of me wonders what would have happened if I had seen characters like Kelsey coming into their feelings — to see another young queer Jewish girl on screen dealing with the same issues I was, and not feel so alone in a household that didn’t dare to talk about such things.

Luckily, Kelsey doesn’t have to be alone.

Later in the episode, Kelsey goes for writerly advice from a trusted mentor, JP’s sister’s girlfriend, Kat. When Kelsey discloses her worry that her story hits too close to home and if she could change it, Kat reassures her that good writers write what they know and tells her, “Writing is vulnerable. Writing is sharing. This story is a part of you and you shouldn’t hold back any beautiful part of yourself.” Quite frankly, it’s so lovely seeing these two different generations of queer women talking to each other; the older one reassuring the younger that the way she feels is OK can put anyone to tears.

With that advice in mind, Kelsey reunites with Stacks and proceeds to finish their story together. As the two receive a positive reception from their friends, Kelsey takes a leap of faith and decides to be honest with herself and Stacks by telling the truth, saying the words, “I like writing these stories with you. But I really love being able to hang out and spend more time with you ‘cause… I… I… I like you.” A point-blank confession.

Stacks smiles and says, “Whether in the pages of a book or the time we share together, you’re the girl I long for by my side.”

A few years ago, if you had told me that I would see a direct canonical onscreen confession between two girls on television, I would have had some doubts, being burned by queerbaiting and teasing before. But with everything said, Kelsey and Stacks smile at each other and proceed to hold hands. It’s enough to make this Jewish fangirl smile.

Hopefully, more artists like the creators and artists involved with “Craig of the Creek” will step forward, bringing more nuanced and diverse representation to an audience of queer animated fans, ready for validation.