‘Steven Universe’ Is the Jew-ish TV Show Your Family Needs 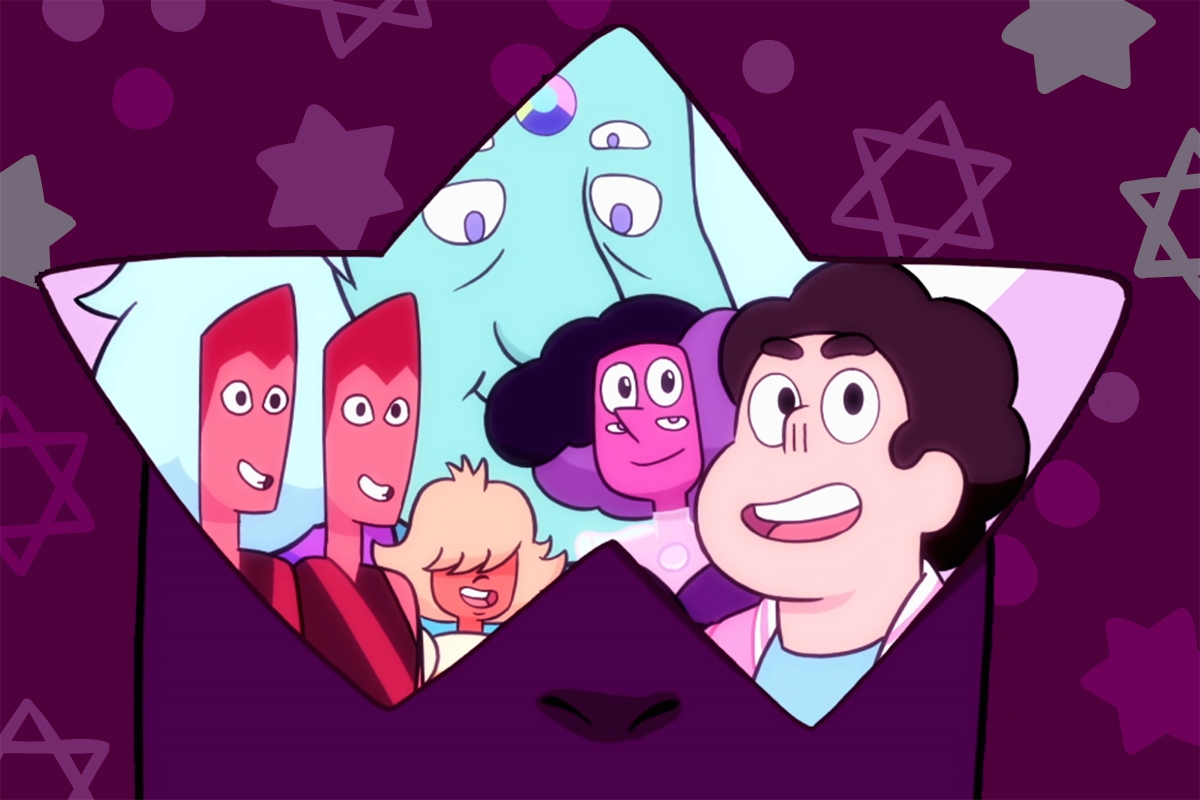 While I am infinitely grateful for shows like PBS’ Cyberchase and Between the Lions for teaching me logical intelligence and reading comprehension — skills that are undoubtedly important to teach the next generation — it’s rare to find a show that teaches emotional intelligence.

But then I discovered Steven Universe.

For those of you who aren’t familiar, Steven Universe is an animated series about the adventures of the Crystal Gems: a trio of gemstone-powered aliens (Garnet, Amethyst, and Pearl) and a half-Gem, or half-human boy, Steven. Steven and the Crystal Gems live in a fictional town called Beach City and fight together to protect the planet Earth.

The Cartoon Network series ran for five seasons, from 2013 to 2019. It was followed by a film, and concluded with a limited “epilogue” series, Steven Universe Future, which aired its final episode this past March, just as Covid-19 was making itself known in the U.S.

The show is rightly championed for its representation and its authenticity. I credit most of this to the brilliance of its Jewish creator, Rebecca Sugar.

As a queer woman, I can only imagine how much earlier in my life I would’ve accepted my identity had Steven Universe been on TV when I was growing up. But that’s not all. After binging the entire series, I’ve found myself pondering so many things: How would seeing the series’ representations of diverse bodies helped with my disordered relationship with food? Would I have learned about elements of restorative justice at a younger age, and deployed them during everyday conflict? Could I have been able to more readily recognize toxic relationships, and save myself some heartache?

I’ll never know for sure — but I’m glad that today’s kids will have the opportunity to think about these things early, and often. Here are some essential topics that Steven Universe addresses — and why you and your kids should watch this groundbreaking show:

At a mere glance, Steven Universe is already changing the game on the bodies we are used to seeing in children’s media.

Disney, for example, takes the concept of “eyes being bigger than your stomach” to a truly disturbing place: Many iconic female characters’ literally have eyes drawn bigger than their stomachs. But looking at the residents of Steven’s hometown, Beach City, you see so many different body shapes, leg lengths, nose sizes, hair colors, and skin tones. It’s beyond refreshing. They may be cartoons, but these are real bodies!

In most TV shows, if a character isn’t cis-gendered, it becomes the plot of the episode (or sometimes even the whole show). Steven Universe, by contrast, doesn’t draw attention to genderfludity most of the time — rather, it’s simply the rules of the world. In Steven’s universe (pun intended), genderfluidity is embraced and explored. In one episode, for example, Steven wears a dress when performing in a concert, and literally no one bats an eye.

In a 2018 interview with NPR, Sugar explains this further: “One of the things that’s really important to me about the show is that the Gems are all non-binary women…They’re coded female which is very important. I was really excited because I felt like I had not seen this. To make a show about a young boy who was looking up to these female-coded characters — they appear to be female, but they’re a little more representative of nonbinary women.”

“They wouldn’t think of themselves as women,” she adds, “but they’re fine with being interpreted that way amongst humans. And I am also a non-binary woman which is been really great to express myself through these characters because it’s very much how I have felt throughout my life.”

A queer love story where no one dies or suffers? Steven Universe proves it’s possible!

Creator Sugar also identifies as bisexual, and as you’d expect, the show made LGBTQ+ history: Steven Universe is the first children’s cartoon to ever feature a queer proposal and wedding. The wedding takes it a step further, inverting the gender roles of the Gems, with the more masculine Ruby donning a flowy wedding gown, while the more femme Saphire — who ALWAYS appears wearing a dress — is buttoned up in a slick suit and bow tie.

Initially introduced as a battle tactic, Gems will sometimes form “fusions” or “fuse”. This process begins when two Gems share a dance — and then they morph together and form an entirely new Gem. This new Gem will have a combination of each individual’s powers and abilities; a melding of their separate personalities, fears, strengths, and weaknesses. The fusion is the embodiment of their relationship, and the act of fusing is intimate and sacred. It’s not always romantic or implied to be sexual, rather, it’s a deep, loving bond.

Through this idea of “fusing,” the show displays what enthusiastic consent looks like (giggles and smiles, or a joyful leap into each other’s arms) as well as the dangers of when consent is absent. When fusion happens through coercion or physical force, the new Gem formed is monstrous, harmful, and quite literally “unstable.”

While many children’s shows are remembered for their cleverly named villains — who are typically equipped with wicked laughs and grand schemes that span many seasons — Steven Universe takes a very different approach. Characters that are first seen as “villains” are ultimately warmly welcomed into Steven’s inner circle. They are then slowly rehabilitated and taught how to function as a non-harmful member of society.

As viewers, we learn why these “villains” turned to their harmful ways: maybe they haven’t been given the tools to understand the harm they are causing or perhaps they’ve been manipulated into thinking this is their only option. Steven’s ever-persisting empathy shows time and time again that restorative justice is an effective solution.

And if all this wasn’t already groundbreaking enough, Sugar takes it all one step further.

Many children shows, like Ben10 or The Powerpuff Girls, depict literal children fighting monsters and supervillains. But while these barely-tweens are kidnapped, tortured, and left fearing for their lives, all the real-life trauma that would be associated with these events are swept under the rug with each victory.

By contrast, Steven’s trauma from countless near-death experiences is addressed head-on. In the epilogue limited series that takes place two years later, Steven suddenly begins experiencing panic attacks, ending in a diagnosis of PTSD. What follows are some truly beautiful and honest conversations about what Steven was unfairly put through, and how to begin the process of group healing.

From a song about meditation to a lovable, fluffy pink lion, each episode is like cuddling your heart for eleven minutes. The soundtrack slaps. The cast is stacked — including appearances from greats such as Estelle (yes, of “American Boy” fame), Nicki Minaj, Patti Lupone, Sinbad, and Uzo Aduba. The colors and visuals are stunning, providing much-needed bursts of serotonin. And while I can’t hop in a time machine and let my younger, wide-eyed self soak it all up, I can make sure the youngins of today (and you!) consume the gift that is Steven Universe.