Hallmark’s New Hanukkah Movie Has a Trailer and Oy 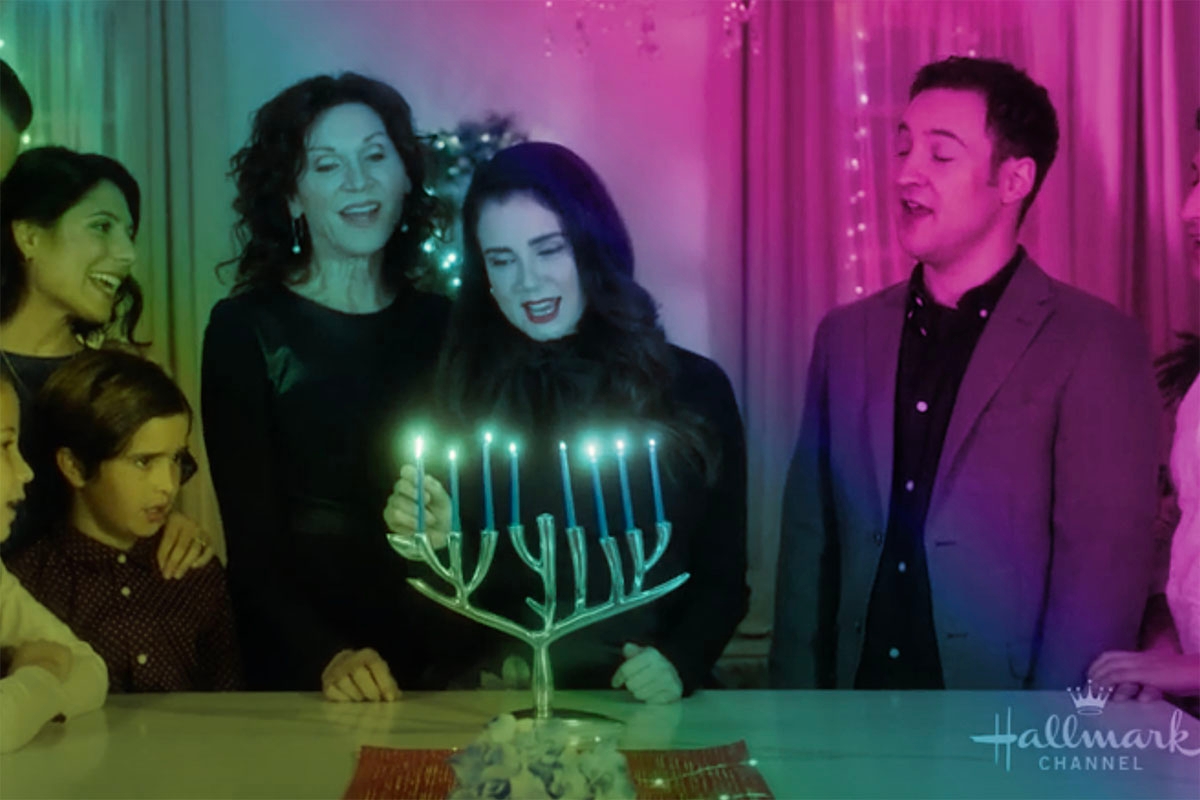 The Hallmark Channel, which is famous for its Christmas movies, is coming out with a new Hanukkah movie this holiday season, called Love, Lights, Hanukkah! Last year, the channel released two “Hanukkah” movies, which, as my colleague Emily Burack established, weren’t actually Hanukkah movies at all — they were Christmas movies that simply mentioned the Jewish holiday.

At the end of the day, those two movies, Holiday Date and Double Holiday, were more about the idea that Christmas is for everyone — yes, even Jews. So, yeah, Hallmark really missed the mark last year (even though a very handsome Jewish dad did star in one, and we did get some on-screen sufganiyot and menorah lightings, so it wasn’t a complete loss).

Well, Love Lights, Hanukkah! already feels like a bit of an improvement in some ways. First off, it has Hanukkah in the name, which, finally! But it’s premise is a little… well…. hmm. Here’s the synopsis from Hallmark: “As Christina prepares her restaurant for Christmas, a DNA test reveals that she’s Jewish! The discovery leads her to a new family and a new, unlikely romance over eight crazy nights. Stars Mia Kirshner, Ben Savage, and Marilu Henner.”

Christina is probably the least Jewish name you could give a Jewish protagonist, even if they only find out they’re Jewish in the movie. However, both Kirshner (of Black Dahlia and The L Word) and Savage (of Boy Meets World fame) are Jewish, and it seems like there’s also romance brewing between these two onscreen Jewish characters, which seems like a fun and wholesome part of this new holiday installment. (OK, fine: All Hallmark movies are wholesome, but they are not all fun.)

Hallmark released the trailer for this new film on Thursday, December 3, and it looks, well, very cheesy. But of course, this is a Hallmark holiday movie we’re talking about. (And, fun fact: In addition to fried foods, it’s also tradition to eat cheese on Hanukkah! So maybe the cheese is intentional?)

Let’s break down the trailer a little.

The preview starts with Christina surrounded by Christmas decorations (presumably at her restaurant) and checking on her knock-off 23andMe results. Turns out, she’s 50% “European Jewish.” Gasp! Through the results, we see that she also finds other people to whom she is related — and, presumably, in the next scene, in which she attends a dinner at a home with a menorah prominently displayed, she is at said relatives’ home, where she reveals to them that she is adopted.

Henner’s character then reveals that… drum roll please… she is her mother! Gasp again! We then get introduced to the main cast, where we see a shot of Henner’s character lovingly admiring a dreidel, a very Jewish thing to do. (OK, not really, but it made me giggle.)

We also get a little preview of the romance between Christina and Savage’s character, “there’s something just so endearing about her,” he tells someone off-camera — which is definitely something I would say about someone I had a crush on and not about a puppy. Also, there’s a menorah and a kiddush cup behind him, just in case you’d forgotten that he was Jewish.

“Is Hanukkah always this much fun?” Christina asks her newfound Jewish family. You see a scene of her lighting the menorah with them and singing a Hanukkah song together. “Depends on the family,” Savage’s replies, with all the wisdom of a Jewish sage.

“I think I found the right family,” Christina says as the preview wraps.

I don’t know about you, but I now feel like I just ate a sufganiyah with too much jelly filling in it.

Aside from the schmaltz overload — which, I mean, it’s a Hallmark movie — I’m not really sure what to expect. Yes, there was an abundance of Christmas decorations on screen, but it also seemed like maybe, finally, Hanukkah would be a focal point in a Hallmark holiday movie. Yes, the script for this movie was written by a Jewish woman, Karen Berger, so that gives us reasons to be hopeful — but she also wrote the teleplay for Holiday Date, last year’s Hallmark “Hanukkah” movie, which, we established, wasn’t really a Hanukkah movie at all. Still, there’s a possibility that this movie could actually be… fun?!

Love, Lights, Hanukkah! was initially meant to premiere after the end of Hanukkah, which would not have been a great idea. Now, however, Hallmark has its air date as December 12, on the second night, right after the end of Shabbat. (Much better, Hallmark!) So I guess we’ll just have to wait until then to see if Hallmark has, finally, given us the cheesy Hanukkah movie we all want and deserve.