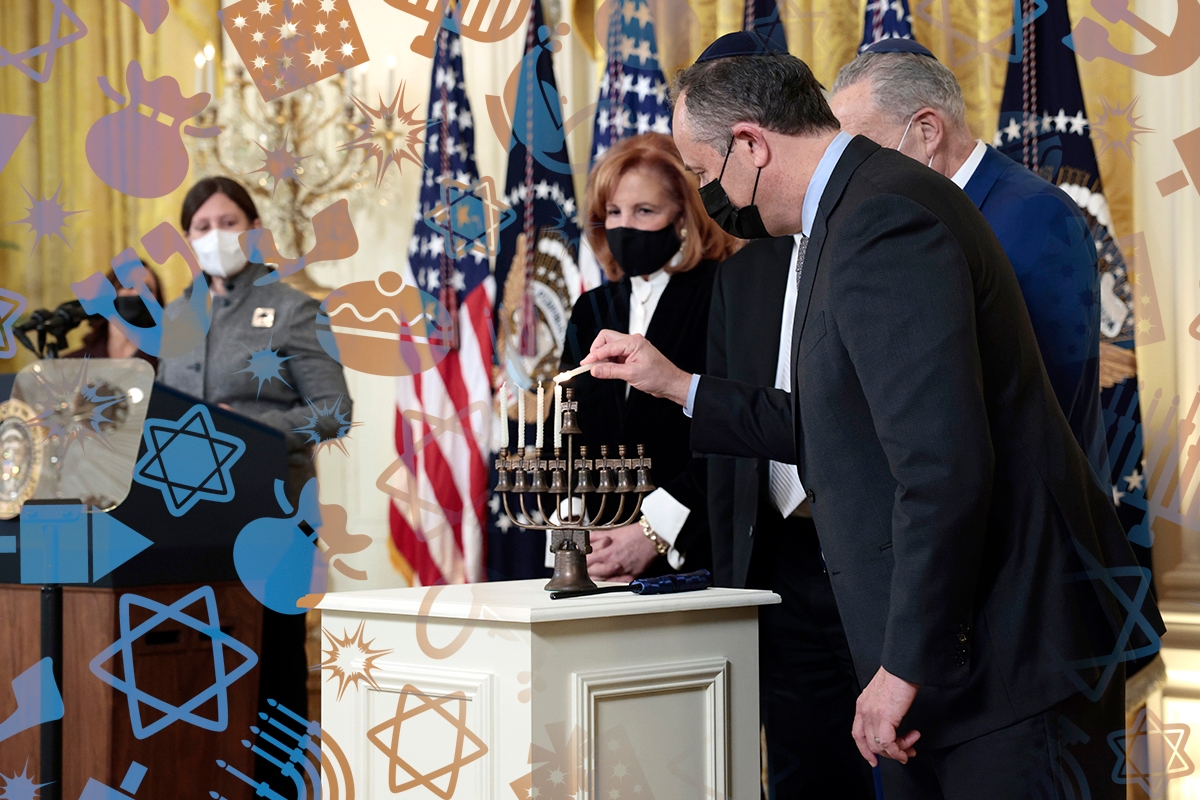 Doug Emhoff, the first second gentleman of our nation, keeps bringing us adorable Jewish moments to enjoy. On Thanksgiving, he shared that the moment he was most grateful for this year was hanging a mezuzah in the Vice President’s residence. And this Hanukkah, he is once again reminding us how special it is to have a Jewish second spouse.

On the fourth night of Hanukkah, Emhoff celebrated at the Biden administration’s first annual Hanukkah party — a tradition that dates back to 2001. Emhoff’s presence made the night extra-special, and everyone in the room, including Emhoff himself, seemed to realize that.

After first lady Jill Biden welcomed the crowd, she introduced Emhoff, saying, “It is my honor to introduce someone who is a light in so many lives. He’s a loving father and husband, educator and friend — please welcome the second gentleman of the United States, Doug Emhoff.”

“Thank you, Jill, for being such a light in all of our lives,” he countered and lauded her for the light exemplified in the holiday decorations she chose.

“A few weeks ago, I visited my childhood home in Old Bridge, New Jersey,” Emhoff then told the crowd. “And what an experience — I actually got to peer into the house and I saw the window sill where our family menorah sat. I went back to my temple, where I was bar mitzvahed, unannounced,” he sheepishly admitted.

“To think that today, I’m here before you as the first Jewish spouse of an American president or vice president celebrating Hanukkah, in the people’s house, it’s humbling and it’s not lost on me that I stand before you all on behalf of all the Jewish families and communities out there across our country. I understand that and I really appreciate it,” he said, putting his hands on his heart.

“As our great president has said, our history, our values as Jews, are an essential part of who we are as Americans. Jewish values are American values, and I believe this deeply,” Emhoff added, emphasizing his words by pumping his fist in the air. “And that’s really what makes us being here together, together, so powerful.”

One of the cutest moments of the evening was when Emhoff acknowledged his friend Chanan Weissman, who is the White House liaison to the Jewish community, with a wide smile. Emhoff applauded Weissman for not only helping to organize the Hanukkah event, but for helping him “to be able to communicate the things that he wants to communicate to the Jewish community, the country and the world.”

Emhoff went on to congratulate Weissman and his wife for welcoming their baby Rosie to the world this week. And then, Emhoff couldn’t help but share a Jewish joke in honor of the new Jewish dad: “So tonight we are celebrating Chanan-ukkah,” he said, then he flinched and shook his hands apologetically, adding an audible “sorry” for the groan-worthy pun.

Then, it was Emhoff’s turn to introduce his favorite person in the room — his wife, Vice President Kamala “Momala” Harris.

“She loves her country, she loves her family,” he told the crowd, “and she loves celebrating Hanukkah, which we honored together earlier this week when she and I lit the first candle on the first menorah ever in the Vice President’s residence.”

The menorah the couple lit this past Sunday night had belonged to Aaron Feuerstein. He was a businessman known as the “Mensch of Malden Mills” for continuing to pay the thousands of workers at his textile factory even after it burned down in 1995, and passed this year at age 95. It was a beautiful tribute and also a moving Shehecheyanu moment, to boot! The couple was so moved by this vice-presidential first that they forgot to put foil down on the table they put the menorah on, but we can forgive that (though the table may not).

From our family to yours, Happy Hanukkah. pic.twitter.com/yfCQfsE1uX

Last year, as Harris and Emhoff lit their own menorah shortly after the 2020 election, Emhoff called Hanukkah “one of our favorite holidays in our big modern family.”

Harris echoed these words this year again: “As the first second gentleman, Hanukkah is one of our family favorites as a holiday… and every year our family, like many families around the world, gathers to reflect on the lessons of the Hanukkah story, the power of the people, the possibility of the future, that even in despair there is hope, that even in darkness, there is light.”

In his speech later that evening, President Biden spoke about his relationship with former Israeli prime minister Golda Meir, whom he met after the Six-Day War. He also honored Jewish dad Merrick Garland for “practicing the Jewish tradition of restoring justice to the justice department” and talked about Jewish resilience and repudiating antisemitism.

Biden also acknowledged how Emhoff’s presence made the night one that would go down in history: “This is a White House tradition, but for the first time in history, it’s a family tradition,” Biden told the crowd.

The last speaker of the evening, Rabbi Lauren Holtzblatt, acknowledged the darkness of the pandemic: “Rabbis like myself carried shovels in our trunk, that is the amount of funerals we went to,” she said, and then acknowledged the awesome light that has come in the form of the vaccine, science and leadership built on love, honesty and human dignity.

At the end of the evening, Emhoff, along with Chuck Schumer, Rabbi Aaron Glatt, and Suzie Stern lit a bronze menorah together, led by Rabbi Holtzblatt. That menorah, with candleholders shaped like little liberty bells, belonged to Jewish artist Manfred Anson (who also designed this very special Lady Liberty menorah). Anson left Nazi Germany for Australia as a teen and made the United States his new home.

It was really an incredible menorah to light on such a momentous — and historic — evening.

Surrounded by family, friends, and colleagues, it was an honor to celebrate the 4th night of Hanukkah at the White House. pic.twitter.com/vXMxTXvMGl