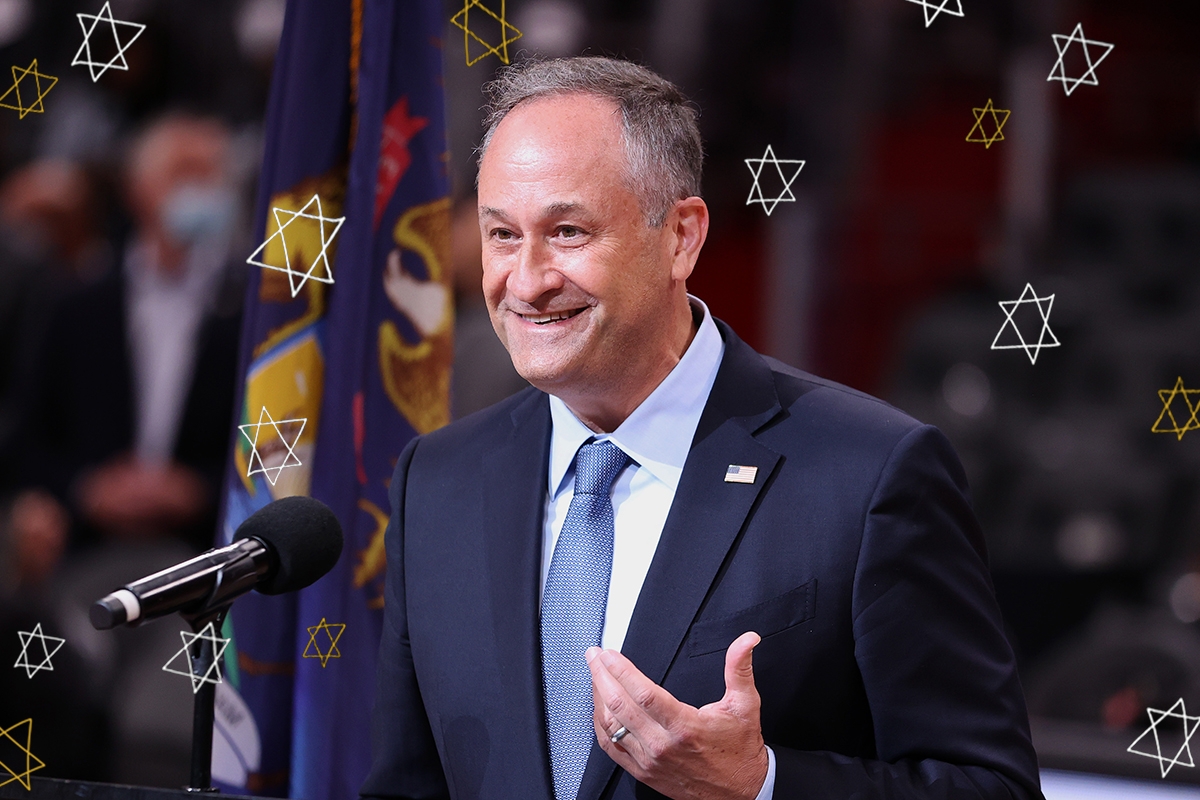 Jewish second gentleman Doug Emhoff just won our hearts again with his super Jewish Thanksgiving tweet! The Jewish dad of two, Vice President Kamala (Momala) Harris’ hubby, and the first-ever second gentleman said that the moment he was more grateful for this entire year was putting up a mezuzah in the Naval Observatory, the residence of the Vice President.

“For us, and for everyone, Thanksgiving is a time for reflection on the past year,” Emhoff wrote on Twitter. “One of my favorite memories was when our family visited and together we hung a mezuzah on the front door of the Vice President’s Residence,” he wrote, sharing some truly sweet photos from the event.

For us, and for everyone, Thanksgiving is a time for reflection on the past year. One of my favorite memories was when our family visited and together we hung a mezuzah on the front door of the Vice President’s Residence. pic.twitter.com/Lj5jYM4Hic

First of all, in case you need a refresher, a mezuzah is a traditional rectangular box filled with a scroll of scripture that is affixed to the doorways of Jewish homes. The ritual comes from Deuteronomy, where it is written that “you shall inscribe them on the doorposts (mezuzot) of your house and on your gates.”

The mezuzah hanging ceremony took place back on October 7, and was officiated by Rabbi Peter S. Berg of Atlanta’s The Temple synagogue. Emhoff affixed the mezuzah himself, and you can see it is correctly slanted. Kamala stood behind him, admiring the handiwork because that is what a loving spouse does.

The traditional prayer for affixing a mezuzah — “Baruch ata Adonai Eloheinu melech ha-olam, asher kiddeshanu be-mitzvotav ve-tzivvanu likboa mezuzah” or in English, “Blessed are You, Lord our God, Ruler of the universe, who has sanctified us with His commandments and commanded us to affix a mezuzah” — was read.

But what makes it even more special is that Emhoff was flanked by his Jewish parents — Michael and Barbra, better known among his family as Mike and Barb, who schlepped over all the way from California. Harris’ impression of her Jewish mother-in-law is, lest we forget, nothing short of iconic.

I also can’t help but point out how lovely the actual mezuzah, which was received on loan from The Temple, is! It is just so cute, with a rose gold hamsa and the Hebrew letter “shin” — which stands for “Shaddai,” the acronym for “shomer daltot Yisrael,” the guardian of the doors of Israel, another name of God.

There is something so moving about affixing a new mezuzah — and consecrating the space for your family. It’s one of the affirming moments of moving into a new residence, a thing that turns a house into a Jewish home.

But in this particular case, this moment was also history-making. This is the first time the VP house has been marked as a Jewish residence, which is truly momentous.

Many of the incredible moments we’ve admired Doug Emhoff for partaking in — from celebrating Jewish holidays to honoring Jewish justice RBG — have been especially moving because of his Judaism.

Emhoff recently returned from Paris, where he visited the Shoah (Holocaust) Museum and ate pastries in the very Jewish Le Marais neighborhood. Late last month, Emhoff also paid a brief surprise visit to his childhood synagogue, Temple Shalom in Aberdeen, New Jersey, where the second gentleman had his bar mitzvah.

It is so lovely to see him celebrating and embracing his Judaism wherever he goes, and we can’t wait to see him partake in this year’s Hanukkah festivities — might we suggest procuring a pair of matching Vice Presidential Hanukkah pajamas or sweaters?