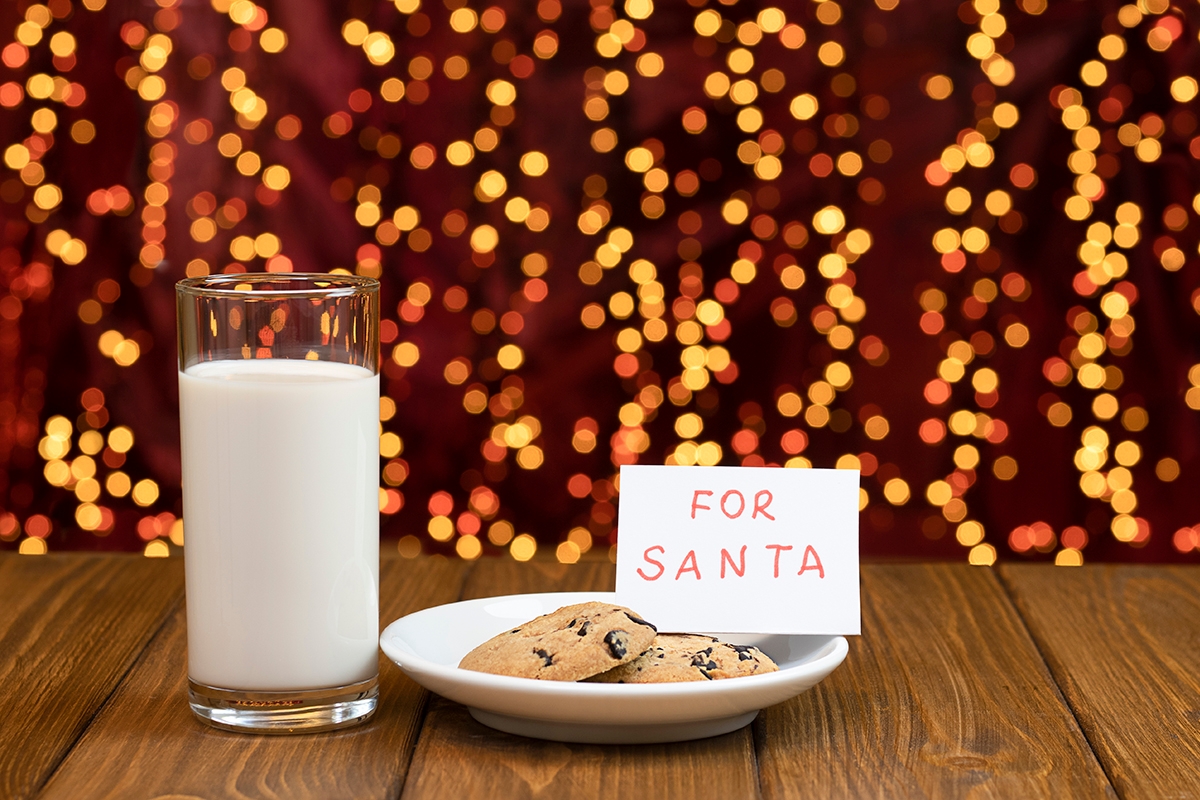 This is the story of how a Jewish mom became Santa Claus.

I got married young (normal in the Orthodox Jewish world), but it didn’t work out and I got divorced pretty quickly thereafter. It was worth it, though, because I ended up with the most amazing child I could ever have asked for.

I began a journey of self-discovery after he was born that included a shift from Orthodoxy and more openness to secular and interfaith customs, like having a Christmas tree. (I grew up in an interfaith environment in the South before becoming Orthodox in my teens, and so Christmas trees are nostalgic and beautiful to me.)

When my son was 3, I began a serious interfaith relationship and my then-partner introduced my son to Santa Claus. Don’t get me wrong — the Santa thing was fun for a bit. But I’ve been kind of over it the last couple years. Especially as he’s gotten older, having to get my son extra, perfect gifts from Santa on top of whatever I’d already gotten him from me just felt like too much (especially on the tail end of eight nights of Hanukkah treats and gifts).

However, there was no way I was going to tell my child the truth in the first leg of the pandemic, when we were both completely miserable; I didn’t think his poor little heart could take it. I’ve also been dreading it coming out for years, because my child is an intense Scorpio who remembers things and holds a serious grudge.

But my son is now 8, and whether Santa is real has naturally entered his mind. He’s asked me so many times to know the truth. I approached my response cautiously, answering his question with a question, as per Jewish tradition.

“Well, do you think Santa is real?”

But he’d keep asking me, and I’d say, “What do you want me to tell you?” He finally responded, “The truth.” So, I finally told him.

This is more or less the gist of the conversation:

Me: It’s not that Santa isn’t real as much as that he’s not exactly the same as they show him on TV shows.

Me: What? No. You know how on TV shows there are magical unicorns and fairies, and they’re fun, but they’re not really real because that’s not, like, scientific, right? So, there really was a Santa Claus a long time ago. He was a real person you can look up in a history book. He helped children and people, and he started the Christmas tradition of giving gifts to children. [My historical accuracy gets even more ambiguous from here…]

The work he was doing was so amazing that they wanted to spread it to other countries, too. But since he was a real man and not actually magic, he couldn’t get to all the children. They decided to take the spirit of what he was doing — the spirit of Santa — and let other people around the world choose to be Santas for the kids. So this has been a tradition for hundreds of years, keeping the magic and the spirit of Santa alive. When you get to be a grown up, especially if you loved the magic of Santa as a kid, then you get to choose to take on the job of being Santa for your kids if you want to.

[My son’s eyes became wide at this point, shining with excitement and delight.]

Son: So my Santa is— [he looks at me as if I myself am made of magic].

Me: [Grinning] I decided, when I became a grown-up, to become your Santa and make the magic real for you.

Son: I want to be Santa when I grow up! But for lots of kids!

Me: You could be Santa for your kids and your nieces and nephews. Or you could hand out toys on Christmas dressed as Santa to kids who don’t have a lot. [Gotta push the mitzvah-project agenda wherever I get the chance!]

Son: [Mulling all this information over] And that’s why no one sees Santa. That’s amazing. [Then with a knowing smile, the tiniest bit devious] And I’m the first in my class to know this information.

Me: Yes, yes — but don’t ruin the magic for anyone else. Let their own Santas tell them.

Son: I’m kind of sad that magic isn’t real, though.

Me: Just because Santa isn’t real, doesn’t mean there isn’t magic out there somewhere. I believe it probably exists in some form, deep in my heart. But yeah, so Santa isn’t a fat guy who comes down your chimney. Which is a relief because that would be kinda creepy. But the spirit of Santa is real and letting someone else experience magic is real. And the real magic is spreading love and kindness.

In the end, my son came away with the sense of excitement that comes from carrying on a tradition of doing good for others (incredibly Jewish, but at the highest level of irony given the context). He is thrilled to take part in a practice of giving instead of just consuming — the perfect perspective as we begin getting into winter service projects and tikkun olam as our new family holiday tradition.

After our discussion, he started singing his own rendition of “Santa Claus Is Coming to Town” which goes: “Santa Claus is not coming to town. My mom is coming to town, yeah!” And to be honest, something about a chubby chutzpahdik Jewish mom taking the reins from Santa makes me happy. Because if anyone could manage to mother all the children around the world while meeting impossible deadlines and scooping reindeer poop, you know it would be a Jewish mom. (And forget leaving out cookies. She would bring each house Tupperwares full of brisket and matzah ball soup, because God forbid anyone should still be hungry on her watch.)

Venturing outside of the mold (both the Jewish one and the secular American one) has been an experience in pioneering new terrain that’s been scary and awkward at times. But I’m grateful and proud that I’ve managed to find ways to balance all the different holiday customs that bring us joy, while coming to terms with my own identity.

And that, my friends, is the story of how a Jewish mom became Santa Claus. A Christmas b’simcha to all, and to all a laila tov!