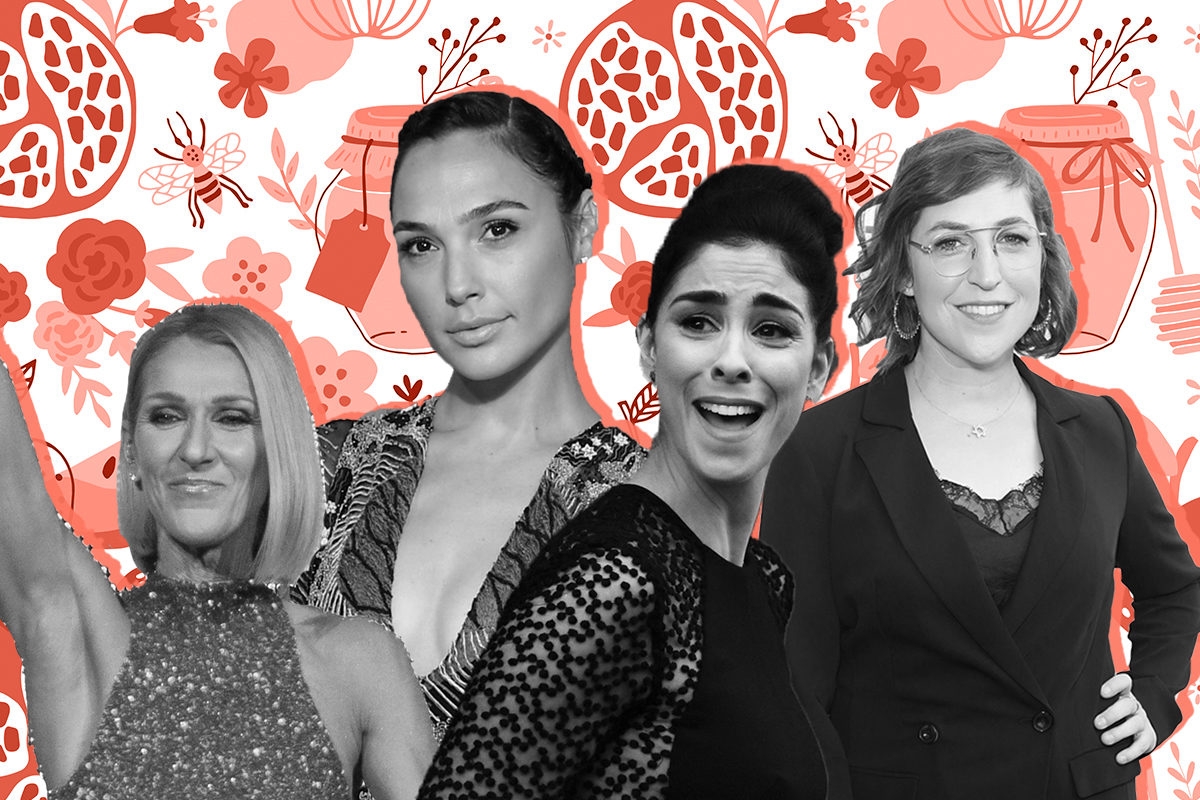 Jewish celebrities, they’re just like us! They celebrate Rosh Hashanah; they eat apples and honey and challah; they make dad jokes about “shofar so good.”

To keep these good vibes going, we rounded up 26 Jewish celebrities (plus one bonus Celine Dion!) with their Rosh Hashanah celebrations and messages.

1.  Israeli actress Gal Gadot shared an image of her cheers-ing with friends or family. She wrote, “Today is the Rosh Hasahna (Jewish new year) May the new year be filled with special simple moments to cherish -laughter, happiness and good ppl surrounding us❤️🍎🍯💋✌️” (A+ use of emojis, Gal!)

Brought in the Jewish New Year the only way I know how – watching my friend @BenSPLATT bring @RadioCity to its feet multiple times. An INCREDIBLE show. Congrats Ben!

(Beanie Feldstein, Ilana Glazer, Henry Winkler and many other Jewish celebrities were in attendance!)

I will never recover 📷: @justinbettman

4. Maisel star Alex Borstein, fresh off her Emmy win, shared an image of her sons as “Shimmy Sham Spidey” and “The Masked Avenger,” wishing her followers “L’Shanah Tovah!”

5. Lena Dunham performed tashlich, a Jewish tradition that symbolizes casting off your sins. She wrote on Instagram, “As I was joyfully letting it all go on a windy Sunday on the Cornish coast, a massive wave hurled itself over the sea wall and onto my head. The group of tweens in the nearby parking lot may have laughed like I got what I deserved, but I laughed because I’d just given away anything that I could be punished for. I’m thankful for this time of reflection. Happy Rosh Hashanah friends 💙”

Tashlikh is the Jewish tradition of walking to a natural body of water on #RoshHashanah and throwing our sins away. We weren’t always observant in our multi-religious household, but my mother dragged me to the river every year and told me to let it all go (“I’m sorry I stole an eraser from my math teacher! I shouldn’t have told Amanda to ‘have a nice life, bitch!”) As I was joyfully letting it all go on a windy Sunday on the Cornish coast, a massive wave hurled itself over the sea wall and onto my head. The group of tweens in the nearby parking lot may have laughed like I got what I deserved, but I laughed because I’d just given away anything that I could be punished for. I’m thankful for this time of reflection. Happy Rosh Hashanah friends 💙

7. Singer Regina Spektor wished her followers a sweet and happy new year — filled with love, peace, art, happiness, kindness, and health. (And some apples and honey are awesome, too!)

Shana Tovah dear peeps! A sweet and happy new year is all we need! Oh and Love. And Peace. And Art. And Happiness. And Kindness. And Health. And some 🍯 & 🍏 is always awesome too. L’Chayim 💙✡️ ❤️

8. Grown-ish Jewish actress Emily Arlook (she plays a bisexual Jewish college student on the Freeform sitcom) wished a happy new year to everyone who “needs a reason to usher in new energy.”

10. Recent bat mitzvah Jenny Mollen shared a shot from her Rosh Hashanah festivities — with a challah on her head!

“That time mom roamed around the apt with a gigantic loaf of bread on her head screaming, “I am the high priestess of Challah!” #lshanatova

She also posted a photo of one of her children, writing “l’shana tova everyone!”

11. Man Repeller founder Leandra Cohen wished her followers “Happy 5780” with a piece of lox in her mouth, duh:

To a sweet new year and esme finding her gold. My everything. 😊

And of her daughters the night before:

L’shana Tova from our family to yours! 💕 #happyandhealthynewyear

Shanah tovah um’tukah! Happy New Year everyone! It’s Rosh HaShanah today so I’m sending out lots of good and happy vibes to all my goys and girls! This is my first one without my Nana around so I hope I got the greeting right but I know she’s smiling down on me for the effort hehe love y’all! Pic by @leggomymeggoz at Love Prism by @tysunderland ✡️🧡🕺🏻

15. Jewish actor Josh Malina shared a video of him with a shofar with audio of “tekiah” overlaid. (He shared the same thing last year! A classic.) “Wishing you all a shanah tovah umetukah! May you have good health, peace, and joy in 5780!” he wrote.

Wishing you all a shanah tovah umetukah! May you have good health, peace, and joy in 5780!

16. Jewish actress Leslie Grossman wished a happy new year to everyone except Donald Trump, his administration, and anyone who defends him.

Shana Tova to everyone except Donald Trump, his entire administration and every single person who defends him. Hoping 5780 brings health happiness and a new President 🥰

17. Justin Bieber’s manager Scooter Braun and his wife, Yael (who is great on Instagram!) spent their Rosh Hashanah at Justin Bieber’s wedding. But, Braun tweeted they still found time for services at a local synagogue in South Carolina.

Shana Tova and thanks to Beth Yam in Hilton head for taking us in. Happy new year to everyone out there. May this new year be filled with joy and happiness

Here they are with the Biebers:

We love you, The Biebers ❤️

18. British Jewish actor Jason Isaacs (you probably know him as Lucius Malfoy from the Harry Potter series) tweeted Happy New Year to Jews everywhere, and to anyone who likes bagels.

“Remember that time when nobody was trying to kill us? Me neither,” he wrote. “May all of your years be sweet, fruitful and fascist-free.”

A belated Happy New Year to jews everywhere (and anyone who likes bagels). 5780 years now. Some run. Remember that time when nobody was trying to kill us? Me neither.

May all of your years be sweet, fruitful and fascist-free. #ShanaTova#NotYouJared

19. Jewish celebrity chef Ina Garten shared a recipe for honey cake. Honestly, the Rosh Hashanah content we want from her!!

Honey cake is a classic dessert for the Jewish New Year, Rosh Hashanah. I like mine moist, spicy, and topped with toasted almonds, plus layers and layers of flavor from honey, brown sugar, orange, coffee, and spices like cinnamon, cloves, allspice, and ginger. Oh! And one more thing – good bourbon!! A link to the recipe on barefootcontessa.com is in my profile.

20. Broad City star Ilana Glazer celebrated with her family and some round challah:

21. Yael Grobglas, the Israeli actress who most recently starred on Jane the Virgin, shared an image of her apples and honey:

22. Comedic husband-and-wife Moshe Kasher and Natasha Leggero were camping with their daughter in Colorado.

Fake smiles all around!

May Apples and Honey fill your New Year with sweetness and Health !!

25. As did Jewish comedian and actress Michaela Watkins:

Just wanna day happy new year to everyone. Let’s not screw this one up. ❤️ #happyroshhashanah

She also shared a video of her daughter, Mercy James, writing she celebrates the New Year with Mozart:

27. And last but most certainly not least, Celine Dion shared a “Shana Tova announcement:” she’ll be performing in Israel next summer on Tu b’Av! Love!