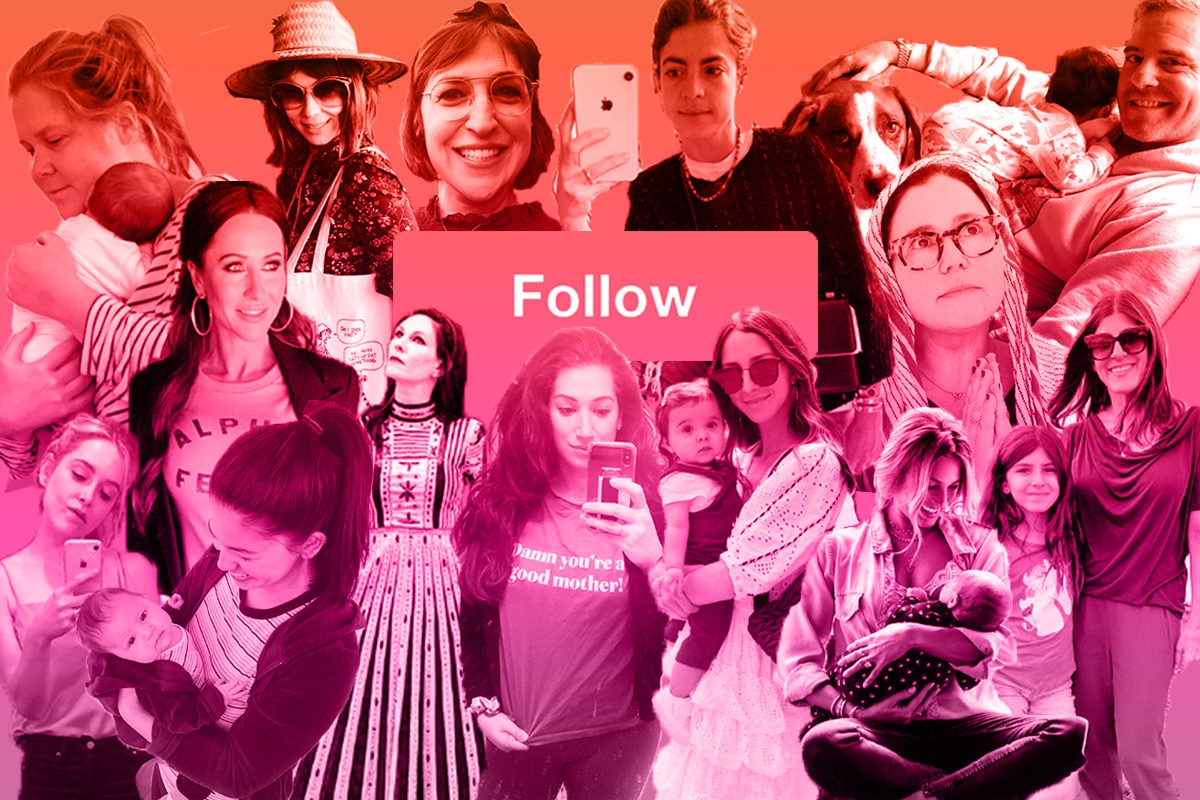 Instagram is arguably the best social media platform — these days, when we’re constantly bombarded with information and we’re all spread so thin, it’s all about the simplicity of scrolling through photos, amirite?

We’re always looking for new people to follow, so we rounded up our favorite Jewish mom Instagram influencers. We’ve limited this to accounts that are open specifically about being a Jewish mom — or else this would just be a list of Jewish celebrity moms we love (which, of course, we’ve already done).

Leandra Medine Cohen founded Man Repeller, a fashion and lifestyle blog, in 2010 while a junior in college. It has since grown to be a full-fledged digital media publication with an amazing social media presence. But we’re here to talk about Leandra herself.

If you had to judge a book by its cover, would you say I’m a cooler parent than @abejcohen?

In 2018, after giving birth to twins after a struggle with infertility, she got real about the pressures moms face on social media. But that hasn’t stopped her from sharing her motherhood journey. Her Instagram bio reads “big fan of my kids” — and that’s what you’ll find on her feed, intertwined with fashion posts. She shares a lot, but it never feels like she is posting her entire life on Instagram.

We’ve written about Arielle Charnas before (her handle used to be @somethingnavy before that became her brand’s page) — millennials are obsessed with this mom of two. She’s fantastic at dealing with haters. And, in true influencer fashion, she shares tons of details about her life as a mom — with pictures that seem too perfect to be real.

lots of family pics this weekend. 💕

But where her true authenticity shines through is on her Instagram stories — they almost feel like you’re watching a reality TV show.

What you’ll find: lots of outfit selfies and her two daughters.

Food network star Molly Yeh recently joined the Jewish mama club — she welcomed daughter Bernie in April. We were already obsessed with her Instagram, but her openness about being a mom makes her even more worth the follow. Plus, her baby photos are just the best!!

Did you think this list would be complete without Meghan Markle’s Jewish BFF!? When she’s not responding to anti-Semitic comments or wishing her followers a Happy Passover (and Easter), she’s sharing cute photos of her kids — twins Brian and John, and daughter Ivy — and posting about her glam job as a stylist and brand strategist.

Comedian Natasha Leggero converted to Judaism before marrying fellow comic Moshe Kasher. She became a mom in 2018, and although she doesn’t often post about her daughter, when she does, it’s fantastic.

Someone photoshop a manicure. Gold by @lorenstewart

What you’ll find: her daughter, her comedy, great hair.

The actress and mom-of-two is currently starring in our favorite TV show, The Marvelous Mrs. Maisel. But her Instagram is where it’s at. Not only does she post amazing behind-the-scenes shots of Maisel, she shares snippets of her life, like her kids wearing Passover plague masks, or playing in the kitchen. Plus, there was her post about not knowing the Maisel haggadah existed!

A friend thought it would be a good idea to freeze this frame and send it to me. Perhaps to remind me why I'm single.

She’s real, funny, and worth your time.

Want real Jewish moms on Instagram? Look no further than Bryce Gruber. The Manhattan mom of five is a lifestyle writer and blogger, but the best thing about her Instagram is her openness.

She doesn’t hold anything back about her life as a mom. As she wrote in a post in January announcing her daughter, Milli Malkah, who was born prematurely after surviving a placenta accreta, “Milli (pronounced me-li) is Hebrew for ‘who is for me?’ After standing on the edge of death, I can say with certainty, it’s God. Malkah means queen, and that’s exactly what this feisty little girl is going to be. I lost a few of my favorite organs in this birth, so this will be my last biological child, but somehow without a variety of my parts, I’ve never felt more complete. And now for a nap.”

Also, here’s a moving post she shared after 34 days in the NCIU:

NICU day 34: we latched on! I know it doesn’t sound that major, but feeding a baby directly from the chest honestly is best (for bonding and preservation of natural breast milk probiotics etc), and it happened last night at 11 PM for the first time. This morning I was fumbling around for nursing tops and found a random one my friends at @boobdesign and @9sprinc sent me a while back. I had no idea what the text said, and then I went to my pumping and crying cave (seriously, that’s what it is) in the hospital and caught my reflection. It says “damn, you’re a good mother!” …and damn, I needed that because between the guilt of having Milli in here so long and not getting to be my regular hands-on self with all the others, I was on the edge of tears. Needed that. And, in the best news ever, she’s doing well at a solid 5 pounds now — and EAAAAATING! 🍼

What you’ll find: stories about her kids, travels, her Israeli husband, and a refreshing honesty you won’t really see elsewhere on Instagram.

If you don’t know Jenny Mollen, you should. She was born in a Jewish family in Arizona, is so fun to follow on Instagram. She’s best known for her role on Angel, and her books Live Fast Die Hot and I Like You Just The Way I Am. Oh and, she’s married to actor Jason Biggs (you know, of American Pie and Orange Is the New Black fame)!

She recently traveled to Israel for her 40th birthday — where she documented the whole trip with the hashtag #jennysbirthright and she had a bat mitzvah at the Western Wall. And when she’s not in Israel, her feed is full of funny photos and videos of her kids and husband:

Ilana Wiles runs not one but three Instagram accounts: @mommyshorts, @averageparentproblems, and @mommyshortssquad. But we’re here to talk about her main one. Wiles began Mommy Shorts as a hobby — but she eventually left her job as an advertising creative director to focus on blogging in 2013. She’s a mom of two daughters, and her Instagram is a way for her to document her family stories. (For her memes, head to the other two accounts.)

The other day, Harlow was talking about two girls in her class who are best friends. Realizing that I’d never heard Harlow refer to any of her friends that way, I asked, “Who’s your best friend, Harlow?” She looked at me in this very specific Harlow way that says she’s disappointed in me for even asking the question. “Mazzy. DUH.” Happy #nationalbestfriendday! Tag your bestie! If your bestie is your sister, even better 💕 #mazzyandharlow

We love her storytelling and her openness about raising her kids.

What you’ll find: her family!

The Jewish writer, actress, and mom has an Instagram that is definitely worth clicking the “follow” button. She posts about her three kids, her work (you may know her show Odd Mom Out), and she uses her platform for activism.

I was tossing and turning all night. I’m ILL over Alabama. @governorkayivey you will NOT STOP ABORTIONS you will only stop SAFE abortions. This is madness. Donating monthly to @yellowfund for our southern sisters 💛

It’s not uncommon to find posts about abortion rights, voting, and more, alongside red carpet and family photos. Also, her standout style is like no other.

What you’ll find: jokes, calls to action, her work, and her family.

(Psst… for more Jill, listen to her on our Call Your Mother podcast!)

Possibly the most famous mom on this list — and the newest mama. The Jewish comedian recently welcomed son Gene with her husband Chris. And honestly, even though Gene is so tiny, Amy is already so open about being a mom. Are we surprised? No. Do we love it? Hell yes.

For example, here she is pushing a stroller wearing her hospital underwear:

When she posted a photo of her pumping before a show, people were annoyed — but we love her transparency and willingness to show all parts of being a new mom.

What you’ll find: hospital underwear jokes, plus her comedy, her husband, and shoutouts to other artists and comedians.

Yael Cohen Braun’s Instagram handle is just @yael — that shows you the level of #influencer she is.

Braun, born to a South African Jewish family and raised in Vancouver, Canada, was the founder of motherlucker, a parenting site, and Let’s Fuck Cancer, a nonprofit dedicated to “prevention, early detection, and providing emotional support and guidance to those affected by cancer.” She’s also married to Scooter Braun, who represents singers such as Justin Bieber and Ariana Grande (have you heard of them?!).

What you’ll find: her kids and some seriously famous pals!

Last but definitely not least: Mayim Bialik! On Insta, the Jewish mom of two is open about her Jewishness, her kids, her career, and so much more. (Like, her cat wearing a carrot hat, or wearing a matzah necklace during Passover.)

Spent the afternoon with 100 women rabbis at the @womensrabbinicnetwork . In the pink shirt to my left is the first woman ever ordained, Sally Priesand- it was 47 years ago today!!! Also in the slideshow are my mother in law and her Rabbi, Melanie Aron, from Los Gatos. And yes, also a pic of Rabbi Karen Bender rocking an often worn lady-friendly decorative wire kippah 🙂 #wedontallwearglasses #justmostofus

We obviously love Mayim, and love following her.

What you’ll find: a healthy mix of her family, her professional life, and her work in the Jewish world.

And a bonus dad!

How could we NOT include Andy Cohen on this list?! He welcomed a baby son, Benjamin, in February. (Everything about his baby gives us all the feels.) And since, he has shared the most delightful photos of him. Follow for the baby, seriously.

#WWHL is back tonight! Til then, grab my nose! 👶

What you’ll find: his adorable son, and Bravo stuff!