Amazon’s ‘Hunters’ Is Super Jewish and Worth Your Time 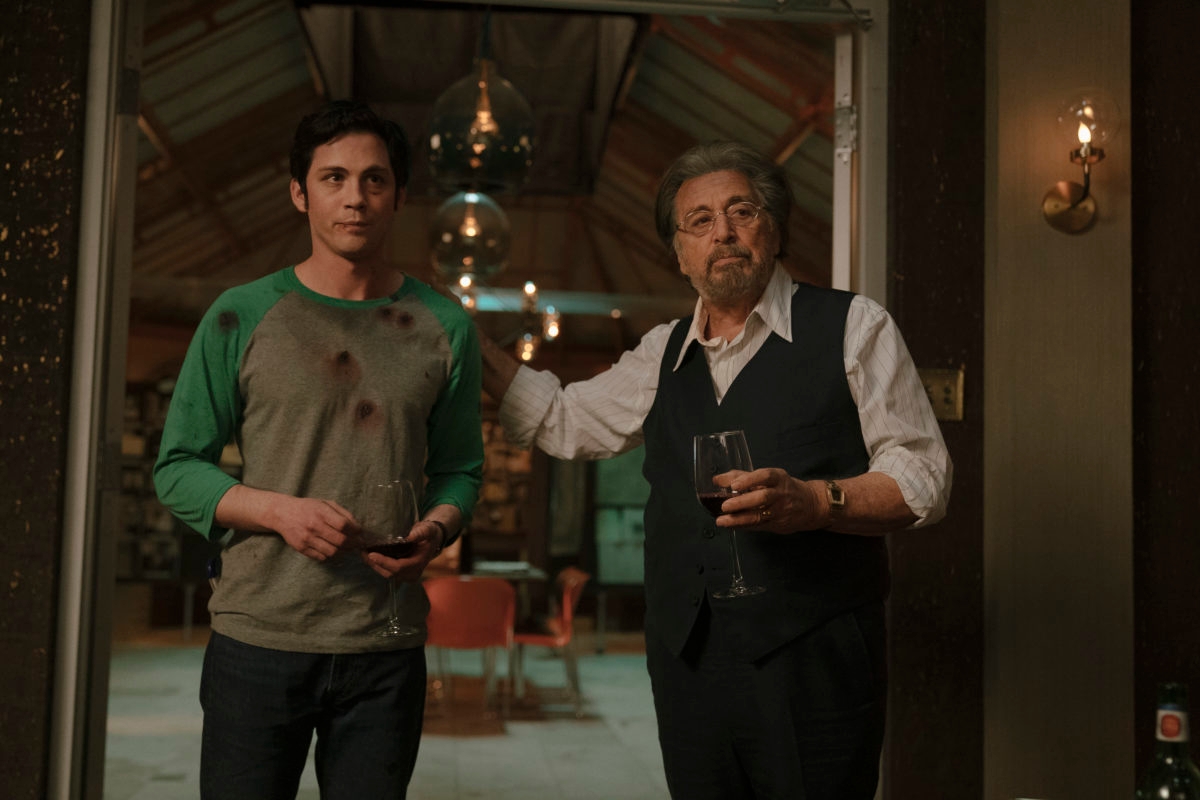 There’s nothing quite like Hunters on TV right now. The Amazon Prime show stars Al Pacino as the Jewish head of a team of Nazi hunters in 1970s New York — and it is a lot.

Hunters tells the story of Jonah Heidelbaum (played by a very Jewish, very handsome, and very brooding Logan Lerman). At 19, Jonah lives alone with his safta (the Hebrew word for grandmother) Ruth, played by Jeannie Berlin. (Berlin, Elaine May’s daughter, is charming and raspy-voiced as Jonah’s safta.) It’s 1977 New York, and Jonah seems to face anti-Semitism on a daily basis. On the day his grandmother is killed by a supposed burglar, he is beaten up during a marijuana sale gone wrong — his assaulter pummeling him with anti-Semitic expletives and fists. 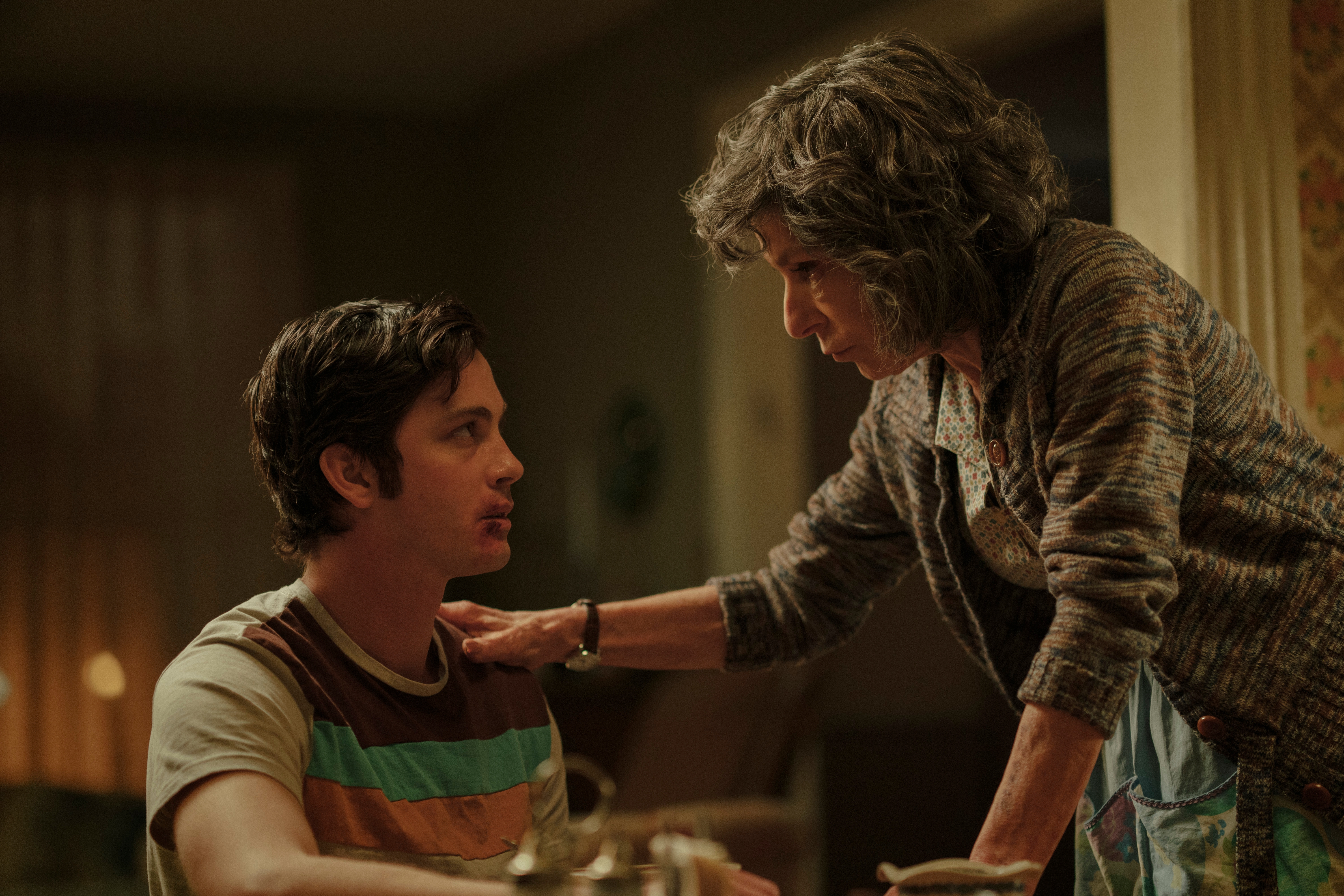 At his grandmother’s shiva, Jonah is visited by Meyer Offerman (Al Pacino!), who introduces himself as a friend of his grandmother — turns out, the two survived Auschwitz together. Jonah later finds out that his safta’s killer was no burglar — but an actual Nazi, part of a group of Hitler-loving German ex-pats and American ideologists trying to start a third Reich in the U.S.

He also discovers that his safta was part of an eclectic Nazi-hunting group, headed by Offerman, who is a sort of rabbi preaching from the pulpit of vengeance. At one point, Offerman tells Jonah, “the Talmud is wrong — living well is not the best revenge. Do you know what the best revenge is? Revenge,” misattributing a quote of a 17th-century British priest.

Jonah joins Offerman’s group, the eponymous Hunters. But his involvement with Nazi-hunting comes at a price, as Jonah buries more people and pushes away those he loves. Still, like biblical Jonah could not escape the prophecy, Hunters‘ Jonah can’t seem to be able to escape his apparent destiny to hunt Nazis. And just like the biblical Job, tragedies keep falling upon him one after the other. And, Hunters doesn’t seem to condone or celebrate revenge. While the “eye for an eye” mentality is prevalent among its protagonists, the human price they pay for their obsession with revenge is hard to justify. Rather than being shown as glamorous, the killing of Nazis is often clumsy and unsatisfying. 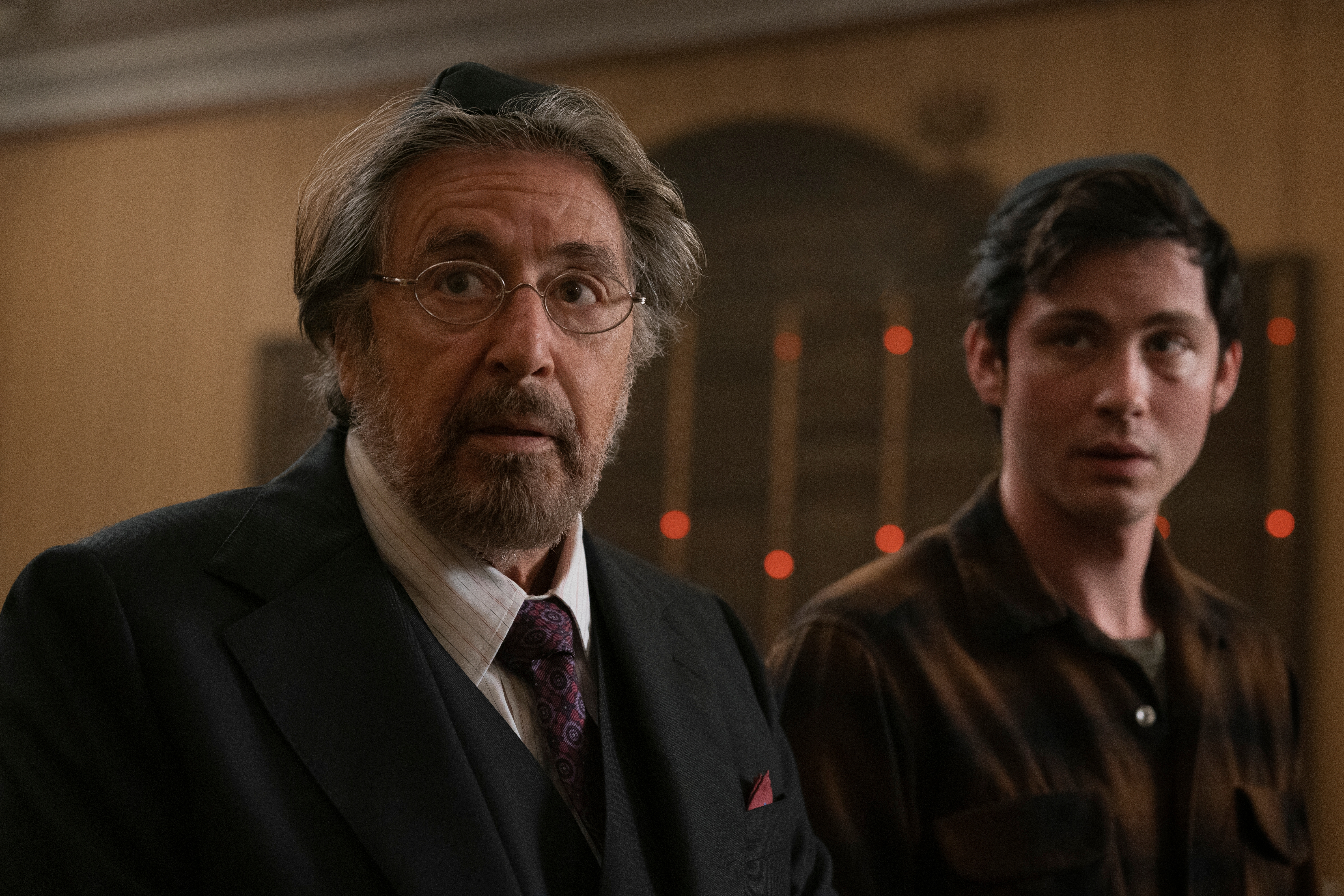 Jonah and Meir at the synagogue (Christopher Saunders / Amazon Studios)

The exploits of the Hunters team, and the Nazis, are depicted in brutal detail. There is a gory flashback scene in which Nazi officers play a game of deadly human chess human prisoners at a concentration camp. There is another graphic scene in which a suspected Nazi is tortured by being fed — there’s no elegant way to put it — horse dung. And this is just the tip of the blood and gore iceberg.

But on the other side of the coin (or perhaps the reichsmark?), Hunters is really, really silly. There’s a video in which Josh Radnor, who plays a has-been actor called Lonnie Bruce, explains in breaking the fourth wall PSA how to spot a Nazi. There’s an absurd technicolor musical montage encouraging Nazis to immigrate to Huntsville, Alabama. “Come see all our new white friends,” says a sweet Nazi lady, previously seen holding up an apple pie. In this sense, Hunters takes a lot from the world of 1970s pop culture and comic books — and it does this well. The colorful and campy montages it juxtaposes with horrors of brutal Nazi murders make the watching experience like nothing else, and the motion graphics and animated segments are a true visual delight. 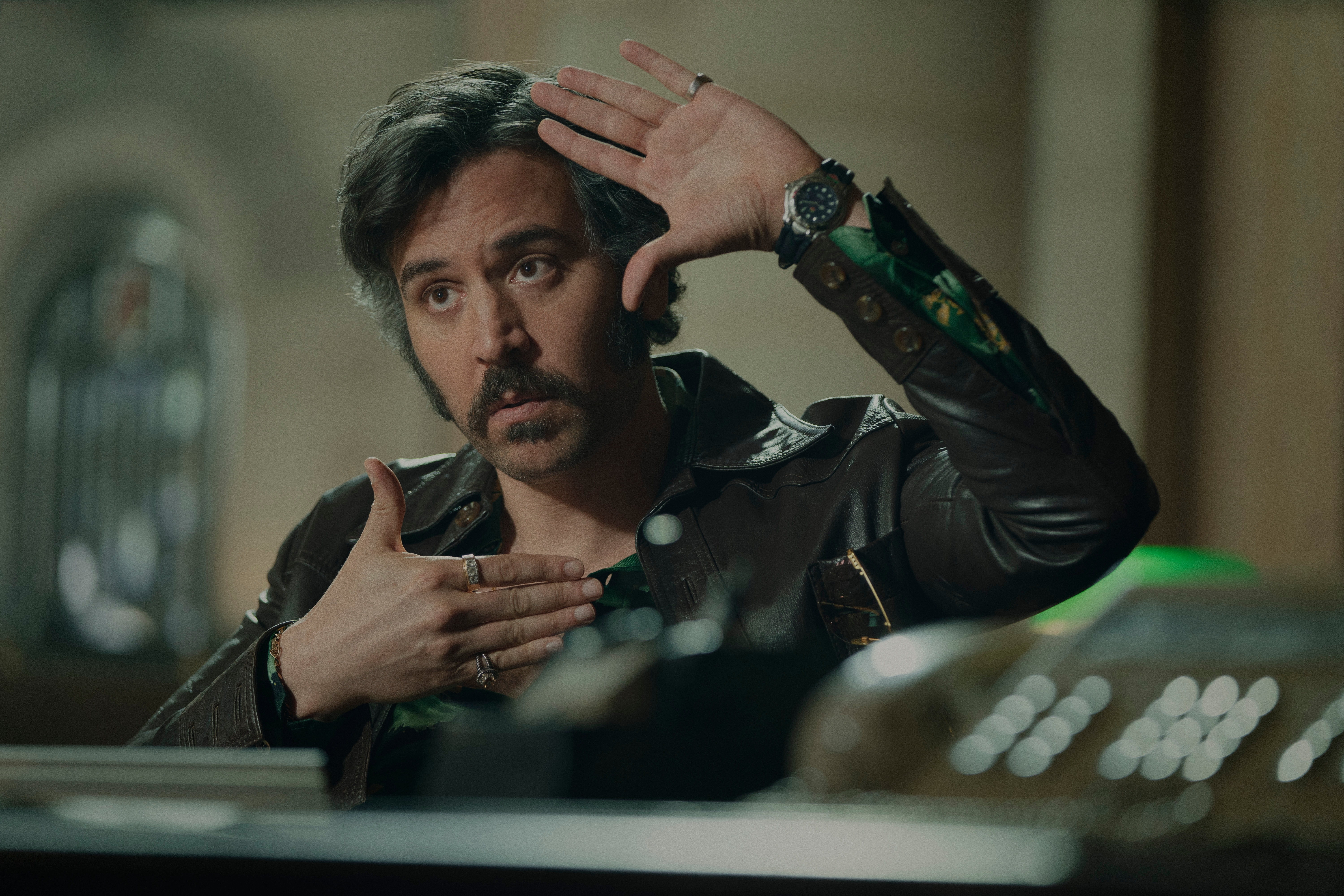 Hunters tried to do so much — violence! dark humor! Jewish references! — in every single scene. Still, after watching the show’s first six episodes, I have come to the conclusion that the show is worthy of our time. More than its over-the-top violence, Hunters is full of biblical, Talmudic, historical, and emotional accuracies. It sometimes clobbers you over the head with all of them, but I prefer a show that does too much to a show that does too little.

Because yes, Hunters does so much — it is almost too Jewish, if that’s possible. I had to stop taking notes of all the Jewish references in the show because they were just so relentless and ridiculous. There was Lonnie calling Jonah a “Judah Maca-bro” and a “Jew-per Hero”; Al Pacino‘s Offerman constantly peppering his speech with a multitude of Talmudic and biblical references, and Jonah shouting at a woman at a shiva to shut her “gefiltefish stinking fat fucking mouth.” Yet, one thing that continuously confused me about the show was the mix of Hebrew and Yiddish. It didn’t seem believable that Holocaust survivors and Jews in WWII Germany spoke Hebrew instead of Yiddish, without ever having made it to the Holy Land. Still, what the show achieves is ultimately more important that what it misses.

There were some flashback scenes to the Holocaust that hit me hard. They reminded me of stories I had heard of as a child of my great uncle who lost his wife and child, and of my grandmother who lost her father during the bombing of Warsaw. These are stories of families pried apart in the face of tragedy. Perhaps because the mood of the show isn’t always somber, it doesn’t really take itself too seriously, I was able to truly feel the horror of those flashback moments.

Saul Rubinek as one of the Hunters, Murray Markovitz, touched me the most. While his wife, played by Carol Kane (whose Yiddish accent I just want to bask in for the rest of my life) is a devout member of their local synagogue, Murray has lost his faith. Murray’s disdain for religion mirrors my own grandfather’s: The Nazi atrocities he endured made him spite God, and rebuke Judaism. My mother recalls him barbecuing on Yom Kippur. 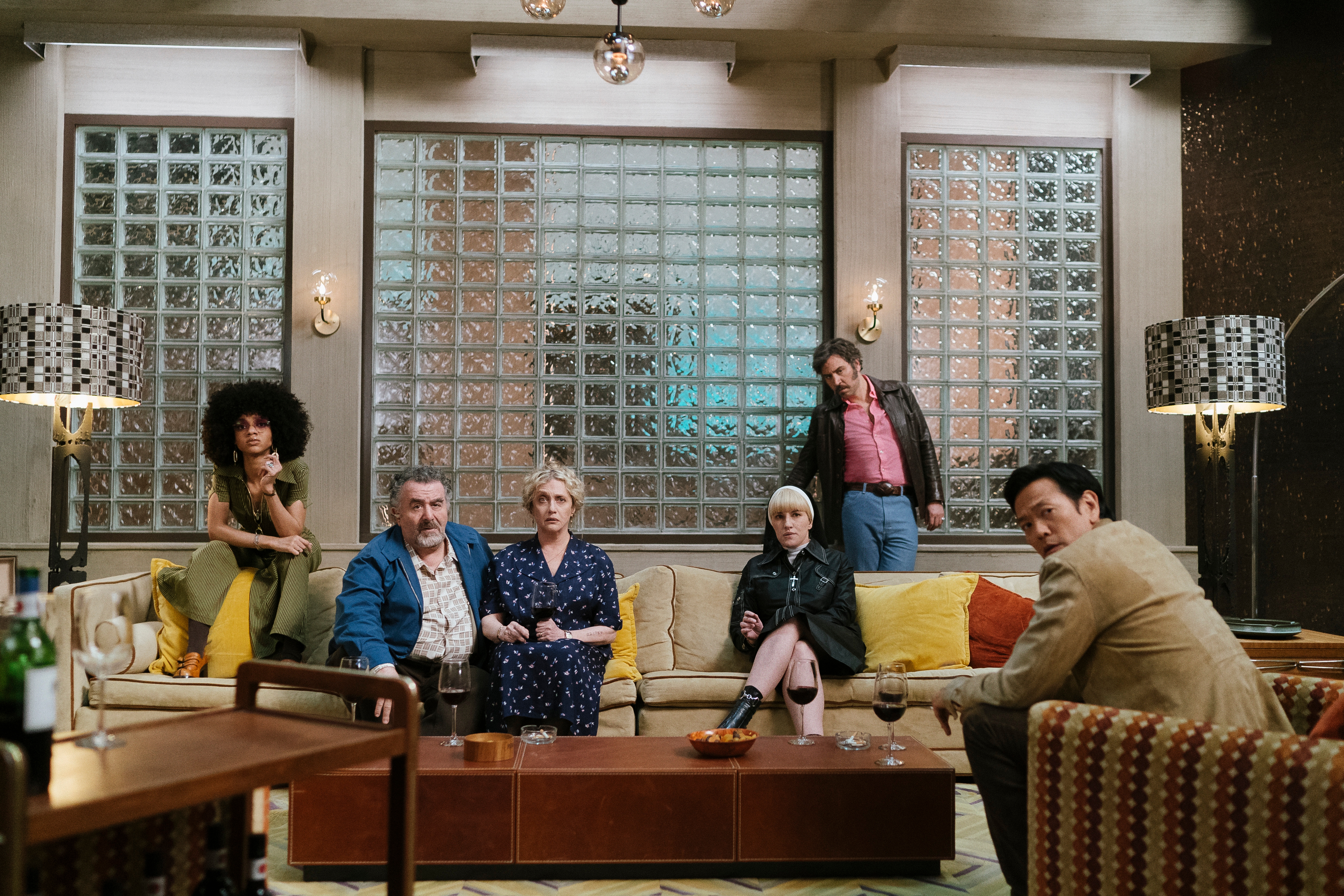 As a rabbi tries to draw Murray back into religion before his daughter’s wedding, he tells him, “sometimes in our trials and trauma we fail to understand that we are all so blessed. Sometimes we miss God’s signs.” After watching all he lost in the Holocaust, one can understand how that platitude rings false to Murray. Looking at the world through Murray’s eyes, I understood my grandfather better than I ever had before.

But it wasn’t just the connection to my own family that made Hunters worth watching for me. What I loved the most about Hunters, was how often I was drawn to look up if something was real — and then found myself surprised to discover, yes, it was based on true stories.

Did Nazis really experiment on Jews with salt water? I googled. Did they really make the Jews at Auschwitz tattoo each other with their serial numbers? Did the U.S. really invite in Nazi scientists? My search history during the days I watched the first five episodes would alarm anyone. To almost all the questions I asked — the answer was yes. (I have not found any evidence that Nazis used Jews as human-sized pawns in a deadly game of chess, however.) It was shocking, yet I learned more about the Holocaust than I have while watching almost any other fictionalized rendition of the Shoah.

When I first saw the trailers for Hunters — with its almost too good to be true ensemble cast — I was hoping for a fun, campy show about Nazi hunters. Essentially, I wanted the TV show equivalent of that video of someone punching a Nazi. But what we got instead was a complex, flawed, and engaging contemplation of morality, combined with a novel exploration of some of the forgotten and truly mind-numbing crimes of the Holocaust.

Hunters, ultimately, is imperfect but a compelling vessel for the small personal stories that help us remember the atrocities of the Holocaust.