I Took My Daughter to a Press Conference About School Covid Rules. It Was a Big Mistake. – Kveller
Skip to Content Skip to Footer

I Took My Daughter to a Press Conference About School Covid Rules. It Was a Big Mistake. 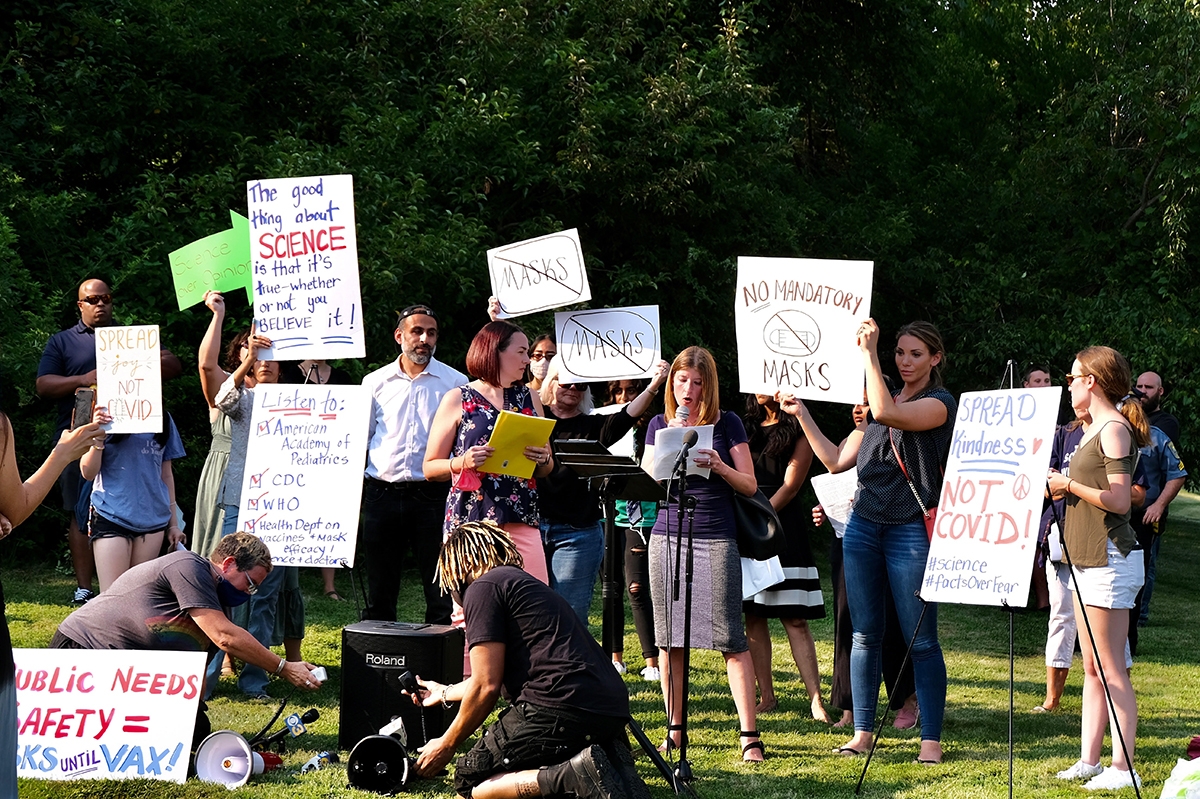 My 12-year-old daughter has taken a keen interest in local politics since the pandemic began, particularly the school board. She’s seen how decisions on virtual school, quarantine and masks directly impact her and her friends, and she wanted to be part of the decision-making.

Excited about her passion for political engagement, I took her to a school board meeting in March where she got her first taste of public commenting. She enjoyed watching the discussions on curriculum and Covid and seeing the board vote in person. But more than anything, she loved having her perspective heard by a room full of adults.

During that meeting, she stood up and calmly explained how her history textbook inaccurately portrayed the relationship between John Smith and Pocohantas as romantic, when Pocohantas was just a child at the time. Her bravery made my heart swell with pride. She concluded her speech by calling out the school board for allowing false history in her classroom. Even the most conservative board members couldn’t help but smile at her pluck.

Inspired, I decided to take her to a press conference in July that was convened by medical professionals who wanted to express their concern about the lack of Covid mitigation planned for the upcoming school year. A petition to have our district follow the American Academy of Pediatrics and Centers for Disease Control recommendations, signed by 173 local medical professionals, was to be presented. I was excited to bring my daughter to see the important role that scientists have in policy making.

It was a decision I would come to regret.

We arrived early to the press conference, held on the front lawn of the school board building. Upbeat dance music drifted through the crowd as students and adults set up signs and microphones. My daughter looked on in admiration as the doctors practiced their speeches, which detailed why our school should follow safety protocols like masking and contact tracing when school begins on August 30.

Although the governor of Pennsylvania is not currently mandating masks in schools, his administration recommends that schools follow federal guidance on mask-wearing. Those federal guidelines couldn’t be more clear: The CDC recently named Bucks County as one of the “communities of substantial transmission” for the coronavirus and recommends masks for all those who are unvaccinated. The AAP goes even further, suggesting that all students over the age of 2 should wear masks in school.

Despite these clear federal guidelines, the Bucks County Health Department, which is responsible for the health of 18,000 students, has refused to take any measures to keep our children safe. That’s right: There is no Covid plan whatsoever for this coming school year.

As soon as the press conference began, a loud group of people waving anti-mask signs pushed towards the front of the crowd. One of them shoved her phone’s camera at my daughter’s face and demanded that she admit that no children have died of Covid. (Not only is this deeply inappropriate, it is also untrue.)

As they closed in on the speakers, a Black man tried to block them from interrupting the press conference. Someone in the crowd yelled, “I can’t breathe!” in a mocking tone. An article from our local NPR affiliate later noted that one of the anti-mask people swiped at the man as he tried to hold the microphone for one of the speakers.

Despite the disruptions, the speakers did their best to carry on. When one doctor, a woman of color, spoke, a person from the crowd yelled, “illegal alien!” Another yelled, “Nazis!”

My daughter looked at me with frightened eyes and I did my best to contain the terror I was feeling. As a Jewish person and a first-generation American, hateful words like this immediately set off alarms in my head. I thought about what it was like for me as a kid with an immigrant mom — how people accused me of killing Jesus and told me to go back where we came from. I thought about how this doctor, a highly educated professional, was reduced to a racist trope the minute she said something that the crowd disagreed with. I reminded myself how quickly that can happen to any of us who don’t fit the mold of a “real American.”

I pulled my daughter close to me and kept one hand securely on her back. For one of the first times ever, my fierce daughter accepted my protection without protest.

The last speaker to approach the microphone was a 16-year-old girl. She spoke about how her family in India had died from Covid. A woman in the crowd screamed, “I don’t give a shit!!!”

When the press conference finally ended, we gathered with the doctors and other folks in the crowd that had been there to support Covid safety in schools. We learned that while one of the doctors spoke, an anti-mask woman behind her had been whispering sexual innuendos and personal insults in order to distract her. We also learned that one of the anti-mask people had threatened to slap a child, while another actually did shove a teenager.

As I listened to account after account of abusive behavior by the anti-mask crowd, my stomach began to clench. This is my community, my family’s community. We’ve lived here 11 years — this is our home. In just a few short weeks, my children will be going back to school with families who not only don’t believe in Covid mitigation, but who also promote bullying and harassment. How can I trust that my children will be safe?

Unfortunately, I’m not alone in this terrible predicament. School districts across the country are experiencing this same bullying and disregard for science. Even more concerning, many right-wing PACs are dumping large amounts of money into electing these anti-mask folks to school board positions.

Our school district is particularly vulnerable to a takeover by extreme-right forces. As a swing county in a swing state, national groups have identified us as a key battleground in the fight to win over the country’s school boards and inject their anti-science, anti-equality policies into our districts.

As a Jewish mom, raising Jewish children, this fight feels personal. I’ve seen how often these far-right groups have aligned with Holocaust deniers. I remember the “Jews will not replace us” chants in Charlottesville. I know that the man who killed 11 Jews in a Pittsburgh synagogue was a devout follower of this extreme ideology.

As my daughter heads into middle school, I take comfort in knowing she has been raised in a home that values science and equality. I feel confident that she has the strength and self-confidence to take measures to protect herself against Covid, and to fill in the gaps in her education should those promoting a Eurocentric curriculum have their way.

But I also know that that’s not enough. Without school-wide support of Covid safety measures, there is a high risk that many students will get sick this year. And, without a firm commitment to teach accurate educational content, there is also a high risk that these right-wing forces will sway our curriculum towards whitewashed propaganda.

Following the press conference, I was left with a deep sense of despair. We moved here largely due to the district’s reputation as one of the best in the state. What happens now? Do we move? I know plenty of parents who are contemplating just that. As a Jewish mom, my mind wanders to all the times my ancestors had to leave their homes for somewhere safer, somewhere their children would be protected.

But I also know that that’s not the right option for my family. After 11 years in this neighborhood we’ve developed strong relationships and community ties. I also think about the message that leaving would send my kids: For their entire lives I’ve been teaching them that it’s our job, as Jews, to find the places in the world that need fixing and do what it takes to make things right. There is work to be done right here in Bucks County, and we’re going to stay here and do it.