Hey Bette Midler, Xenophobia Is Not a Joke – Kveller
Skip to Content Skip to Footer

Hey Bette Midler, Xenophobia Is Not a Joke 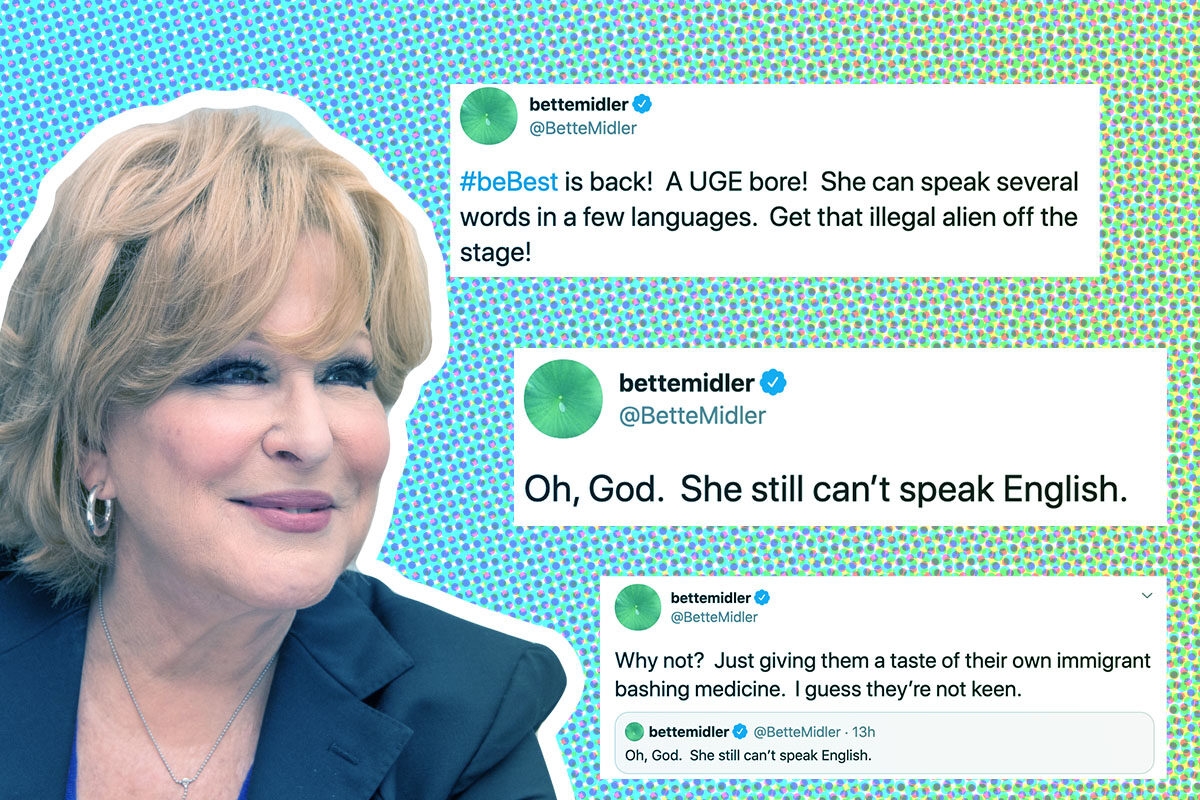 Earlier this summer, I celebrated Bette Midler‘s incredibly enjoyable performance on The Politician. Now, I am here to do the opposite about her performance live-tweeting during the RNC.

In today’s edition of Bette Midler, please don’t tweet that: Midler tweeted a hefty dose of xenophobia directed at Melania Trump, who gave a speech that night at the Republican National Convention this Tuesday.

Now, there are so many reasons to criticize the First Lady, from claiming to be against bullying while her husband exhibits a penchant for mocking people; to her peddling of birtherism along with said husband, the POTUS; to her super-insensitive sartorial choices. Midler has, of course, criticized Melania Trump for all of these things, but during her RNC speech, she also tweeted at the FLOTUS, an immigrant from Slovenia: “Get that illegal alien off the stage!” and “Oh, God. She still can’t speak English.”

please don't do this. not as a joke. not to give people a taste of their own medicine. it's not funny and immigrants have had to deal with this painful bs all their lives. https://t.co/4dhacqkOcW

The tweets may be directed at the First Lady, but they are a powerful punch in the gut to immigrants like me. Immigrants who speak multiple languages but still have people snigger when they mispronounce words. Who keep getting asked, “Where are you really from?” as if our accents or skin color somehow negates our Americanness. Who have been told to “speak American” at grocery stores and gas stations, even if we are, in fact, speaking English. Who have been told to go back to where we came from, even if we worked painstakingly for our American lives and American citizenship.

Look, even if, unlike me, you were born in this country, you are probably the son or daughter or grandchild or great-grandchild of an immigrant — like most Americans, yes, including Midler. So many of us are related to people who were, at one point, mocked for their thick accents — heck, we may have been the ones to have laughed at our parents and grandparents’ mispronunciations, or even felt ashamed of that, not internalizing how much hard work, how much sacrifice, how brave they were to escape persecution and anti-Semitism to come here to this country and build a new life.

My great-aunt came to America after surviving the Holocaust. I, too, remember people laughing at her for saying “oh mein Gott” when she meant “oh my God,” but even after she left this country and retired in Israel, her proudest achievement was becoming a naturalized American citizen.

Midler tried to downplay her tweet on Wednesday, writing, “Why not? Just giving them a taste of their own immigrant bashing medicine. I guess they’re not keen,” in response to the Republican critique of her tweet.

Why not? Just giving them a taste of their own immigrant bashing medicine. I guess they’re not keen. https://t.co/yAuMjgxqiH

It is, of course, double-faced and despicable to criticize Midler’s tweet when you have long denigrated the hard-working immigrants of this country — say, for example, calling them rapists and criminals.

But that doesn’t negate the harm of or justify Midler’s original tweets. As we all learned growing up: Two wrongs don’t make a right.

Finally, later today, Midler issued an apology… Sort of. Without saying “I’m sorry,” she admitted she was wrong to mock Melania’s accent: “America is made up [of] people who speak all kinds of accents, and they are all welcomed always,” she wrote.

Well, all hell has broken loose because I said Melania “still can’t speak English” last night. I was wrong to make fun of her accent. America is made up people who speak with all kinds of accents, and they are all welcomed always.

Ahead of Yom Kippur, the Jewish day of atonement, I must say: This isn’t really how you apologize. You have to actually say you’re sorry, and you have to acknowledge the gravity of your words and the hurt it caused.

And so, Midler’s painful words remain on Twitter — words that are etched in the minds and hearts of so many immigrants, words that make us feel more divided, more ostracized, and more ashamed of the things that are such a profound part of who we are, that remind us of the languages of our forefathers and the stories of our ancestors.

So let me offer my own, American truth: People with accents, thick or light, people with broken English, with complicated immigration stories, they are not just to be welcomed despite these qualities — they should be embraced and appreciated. They should be celebrated for the passion and the color that they bring to this country, with their accents and their histories, willingly weaving themselves into the fabric of this oh-so-imperfect country.

Many of them have experienced the harshest facets of the United States, and many of them, on days like this, still manage to keep a sort of love and idealism about America that feels elusive in the midst of a pandemic and a political reality that tear us all apart every single day.

These same immigrants can and should be criticized if they hold abhorrent views and if they cause harm to others, of course. But we can do all that without bringing any xenophobia to the table.

Ahead of Yom Kippur, let’s view Midler’s tweet as a learning opportunity. Teach yourself, and your children, not to mock people’s accents or to make fun of mispronunciations. Remind yourself, and your kids, that having an accent is something to be admired — that it’s a sign the person speaks another language, that they worked hard to learn the language you may take for granted. And teach them that when we criticize others, it should never be for what they look like or what they sound like — but for how they do or don’t uphold the values upon which we’d like to build our future.