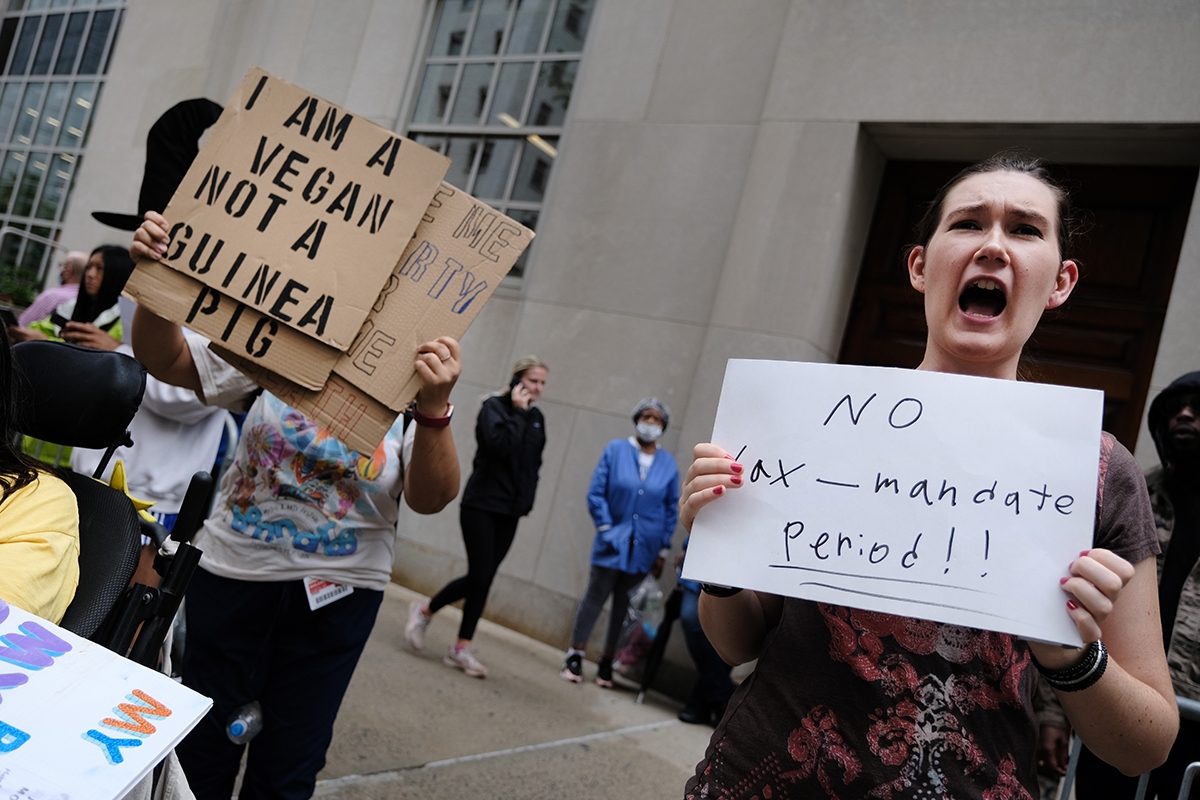 We could meet at the cemetery, I think. It’s outdoors, about halfway between our homes and the kids would get to see some family.

My two kids haven’t seen their cousins outside of FaceTime in months, not since the phrase “delta variant” turned out to be something other than a twist ending in “Loki.” Ultimately we decide to bring them to a park near the midpoint between our homes. There’s a playground, some picnic tables, and the four kids — all too young to be vaccinated against Covid — can play together in relative safety. Probably for the last time for a while. We’ve already agreed that we wouldn’t try to get together for Rosh Hashanah.

I find it hard to believe that we’re at the end of a summer that, for many of us, never really got started. That sometimes happens in years like this, when the High Holidays come pretty early in September. But it’s even worse when I’m trying to figure out how to send my kids back to school and it seems like, for yet another year, there’s no clear plan and no sense of safety.

Amid all this anxiety and uncertainty surrounding Covid, I’ve found it incredibly difficult to get into the High Holiday spirit. In a season in which we’re supposed to be atoning for our sins and apologizing for ways we might have wronged others, I’ve found that I just can’t forgive the anti-vaxxers, the anti-maskers, the people who decided that they didn’t need to quarantine or get tested. The people who demanded that everything reopen, resume, who so wanted to get back to life as usual that they didn’t care how many lives were lost. It’s the season of teshuvah, of repentance, of trying to wipe the slate clean for a new year. But it’s not that easy when I need to stay home with my kids and stream services online — again — because it isn’t safe for them to be back with their community.

If anything, things are worse than it was when we did this all last year. Then, at least, it felt like there was a sense of togetherness — that people were trying to make the best of a hard situation. But the vaccine has revealed that some people never cared about being safe and healthy, and that others only took Covid seriously after it had touched them or their families personally.

This is a season of forgiveness, but also of self-evaluation and trying to become better in the new year. And it’s really hard to do that, to teach my children to do that, when so many people flaunt their selfish behavior by refusing to wear masks or get vaccinated, revel in the freedom to put others at risk and receive praise for their defiance.

Most of all, I can’t forgive people who don’t seem to be in the least bit sorry. Or if they are, it’s only to regret what’s happened to them or their loved ones. And even if there was some remorse, I can’t feel like it’s my place to forgive on behalf of those who are  most hurt by their actions. After all, as an adult, I was able to get vaccinated. I know that doesn’t mean that I’m 100% safe from getting Covid — as long as this virus is allowed to hang around in a large enough unvaccinated population, it’ll generate new variants. Rather, it’s my pre-vaccinated children whose lives are interrupted every day. They are the ones who are unable to visit family and friends. They are relying on other parents to do the right thing and not send their maybe-sick-but-I-have no-child-care student to sit next to them at school. They’re the ones hoping school administrators will care more about keeping them safe than about their own PR, or appeasing the political theater that’s once again turned children’s safety into a plot line.

At the same time, my every instinct is telling me not to blame individuals who fall victim to the memes, hoaxes, quack cures and other lies that are pumped into our consciousness by cable news, social media or word-of-mouth. I’m a historian of science by training and I know how difficult it can be to combat these falsehoods. People don’t bootstrap their way to scientific literacy. As a society, we’ve created systems that are supposed to educate people and help them stay informed of new developments, but these systems have failed or been abused. From efforts to discredit the science behind climate change to tobacco industry-funded studies claiming to show that cigarettes are safe, there’s a long, sad history of scientific disinformation in this country. And in that history, the people who believe pseudoscience are, more often than not, victims. That’s what we’re seeing when we hear that hospitals are overflowing with unvaccinated patients and when anecdotes about deathbed regrets of vaccine refusers are reported in the news.

I can feel sorry for these people — and I do. I can mourn them. I can try to rebuild the systems of learning and information that can help people make better choices. When people feel like they’re included in the scientific process, when they’re encouraged to be part of the solution instead of being treated as part of the problem, they’re more likely to trust the information they receive and act in ways that are more collaborative. But when people’s behavior is putting others at risk—those who can’t get the vaccine, or those who get sick despite the vaccine — and all we see is indifference or actively undermining those who want to be vaccinated, forgiveness isn’t in season.

Rosh Hashanah has never been a “fun” Jewish holiday. But it’s always been one that I’ve felt a strong connection to; to that sense of how the new year will change us, how we’ll change ourselves. How we will learn to improve the faults we discover in ourselves, and how we’ll find the grace to accept the faults we see in others, and to give them the space and time to grow that we’ve needed ourselves.

In so many ways, I want someone who can be patient and forgiving of others; I want to model this behavior for my children so that they can learn from it. But as I cancel even more plans because so many activities remain unsafe for my young children, and as I see friends and family exposed and sick because they were in contact with someone who didn’t take precautions, and I witness a people cheering for administrative power plays that make it harder for us to protect ourselves, it becomes harder and harder to think about teshuvah.

Rosh Hashanah doesn’t feel like a holiday without the sense that we’re all in this together. Through my diligence in masking, social distancing and getting the vaccine when it was made available to me, I spent the last year trying to keep us all in the book of life. I can only hope that, as we head into 5782, everyone else will do the same. If for nothing else, I’d like fewer reasons to visit family in the cemetery.