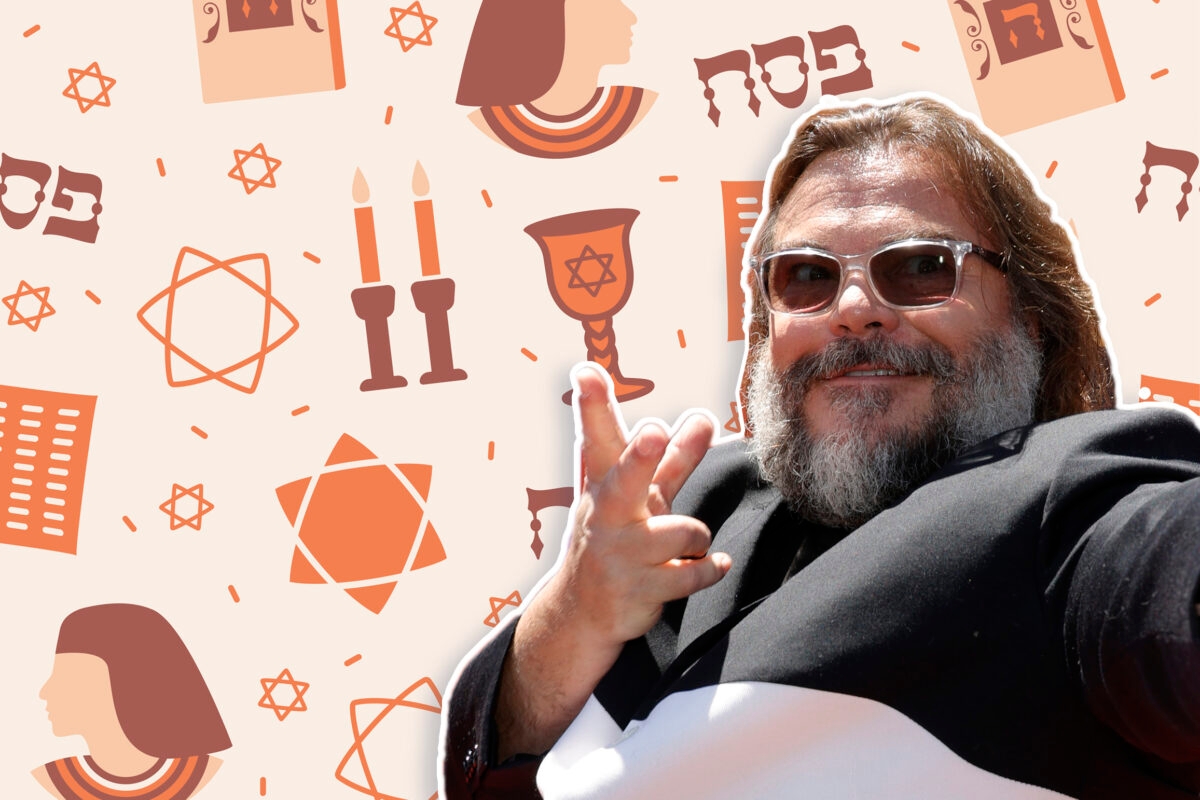 Jewish dad Jack Black is such a singular talent. From “High Fidelity” to “School of Rock” to “Bernie,” his acting and charisma just light up the screen. A generation of kids has grown to adore him as the voice of Po, the star of “Kung Fu Panda” franchise — soon to be in a new Disney+ show.

But Black caught the performance bug in a somewhat unlikely location: Not at theater camp or by watching a particular movie or show — but as an eight-year-old guest at a family friend’s Passover seder.

The actor and Tenacious D band member talked about his earliest acting memory on the Smartless podcast, being interviewed by the great Will Arnett, Jason Bateman and Shawn Hayes.

“We went over to a friend’s house, a family friend, and she was a Holocaust survivor and a really cool lady — mama of the house — and we had our Passover seder, good Jewish din-din, religious (kind of),” Black recalled.

The pivotal moment happened after the meal, when their host invited her guests to play a party game. Black recalled her saying: “Now it’s time for everyone to go to the living room, we’re gonna play the freeze game.” (In the podcast, he very lovingly imitates her Eastern European accent.)

The game, a popular improv theater exercise invented by Viola Spolin, involves acting out a scene until someone tells you to freeze. They then tap one of the actors on the shoulder, assume their position — and start a new scene, reinventing the players’ poses into something new. (You can see an example here.)

For Black, the simple game in the Holocaust survivor’s living room changed his entire life trajectory — “I played that and I caught the fever so hard, because my eight-year-old performance instincts kicked in.” Black was already a big ham and a class clown, and suddenly he found something that absolutely catered to his greatest passions.

Black is also a big fan of Passover seders for another reason: He thinks the song that ends the seder, “Chad Gadya,” is the original metal song. His rendition of it is just so incredible. (He is also very good at singing the Hanukkah blessings.)

Aside from that Holocaust survivor friend, Black also has another important Jewish figure to thank for his acting career — his stepdad, David Katz, who was Jack’s mother’s third husband. The two were married for 35 years, until her death in 2016. Katz was the one who told Black’s mother that he should be an actor; he helped Black to pursue his passion by driving him around to auditions for over a year and helping him get an agent. One of Black’s first gigs was a commercial for the video game Pitfall when he was 12 — and highschool classmate Maya Rudolph said Black “was like the theater god at my school.”

Black is still very close to Katz, who is “very proud and definitely has been a great touchstone and person to talk to all throughout my career, just to share with him — ‘oh this has happened.'” Black says that recently, he’s been trying to encourage Katz’s writing career — “I feel like he got me going [with my acting career] — I’ve gotta get him going.”

Black also used the podcast to talk about his amazing Jewish mom, Judith Love Cohen, an aerospace engineer who worked on the Minuteman missile and in the Apollo space program: “My mom was a real trailblazer, the first woman to be in that field, and climbed the ladder and kicked a lot of ass,” the actor recounted.

Cohen worked on Apollo 13 — “she was responsible for the abort guidance system that actually saved a lot of lives.” Black recalled that a few months after the crash, the astronauts paid her a visit at her office saying they “‘just wanted to thank you, Mrs. Cohen, for saving our lives.”

Cohen raised Black Jewish and sent him to Hebrew school, though the actor was not a fan of academics in general  — “it wasn’t really voluntary until I got bar mitzvahed at 13, and then they’re like ‘oh but you can continue to study’ and I’m like ‘noooooo,'” Black recalled in the podcast episode. Black was more lax with his own children, who had a brief stint at Hebrew day school (he sang Chad Gadya to school administrators to help them get it!) until he and his Jewish wife, Tanya Haden, decided it wasn’t the right fit for their family.

Black shared his woes around raising teens: “We are jonesing for the time three years ago when they loved us way more,” he said of his now 14 and 15-year-old who, despite his stardom, find him oh-so-embarrassing.  “Dude, if I can make my kids laugh that’s the top of the heap,” Black told the podcast, “and it’s tough.”

It’s probably safe to assume that Black’s teens are not game to play the freeze game on Passover seder nights — but we sure are glad he was. And to that amazing Holocaust survivor Passover host who helped bring us the joy that is Jack Black: Thank you.