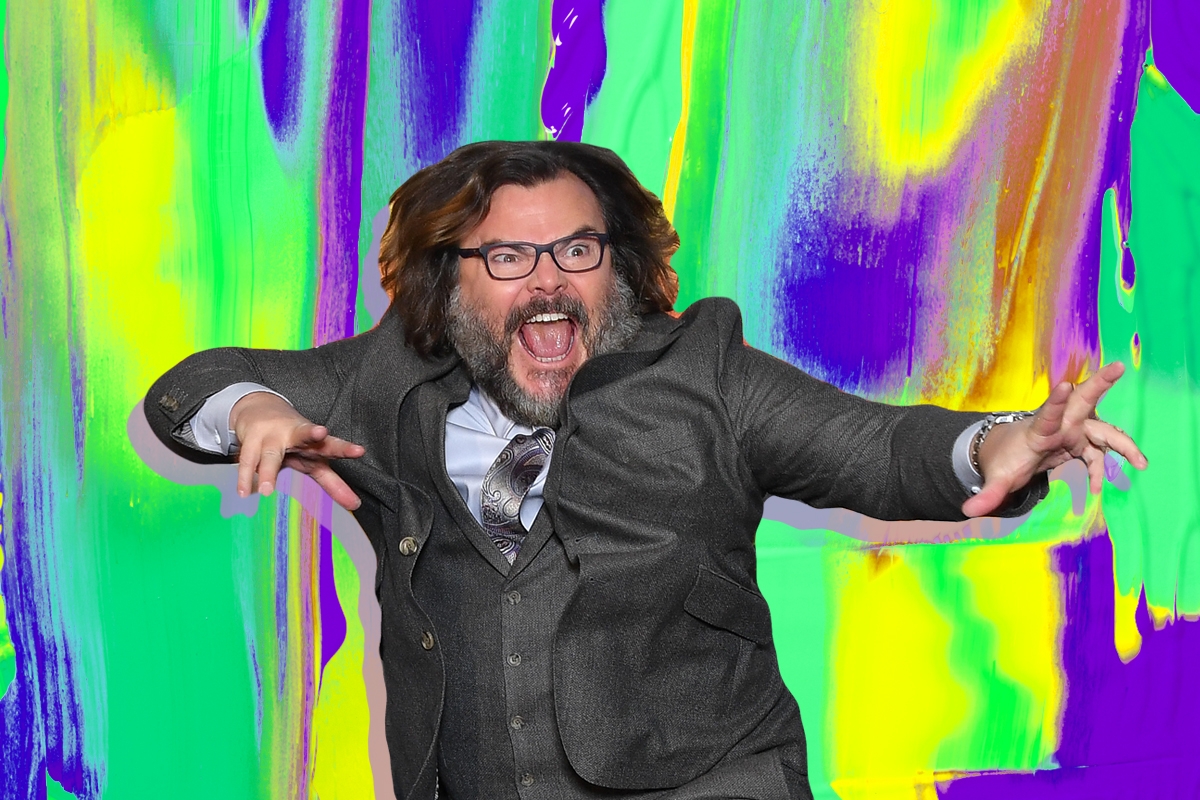 I love these rare moments when the internet collectively realizes that someone who’s been in the public eye for decades is an underrated gem. That happened this week with Jewish dad Jack Black — musician, movie star, and lover of the Passover jam “Chad Gadya.”

In a recent tweet from Hamish Steele — a writer and the creator of Netflix’s DEADENDIA — he shared a heartwarming scene from the 2003 film School of Rock. In the clip, Black’s character cheers up the band’s vocalist, Tomika, assuaging her worries about performing in front of a crowd because, she says “I’m fat.”

“This scene is more revolutionary than I think they even knew and it really stuck with me as a child,” Steele wrote. “Especially the last line.” ( Black’s line: “I like to eat, is that such a crime?” Hear hear!)

This scene is more revolutionary than I think they even knew and it really stuck with me as a child. Especially the last line. pic.twitter.com/KkhvGicjVZ

Throughout the years, Black’s rich career has spanned animated and kid-friendly franchises like Kung Fu Panda and Jumanji to cult hits like School of Rock and High Fidelity. And, with some exceptions — we’re sternly looking at you, Shallow Hal — he’s been a great source of body positivity. He’s an example of how a chubby, short Jewish man can be successful, attractive, and brimming with charisma. Whether it’s in School of Rock or in viral TikToks, Black has shown us that bodies like his deserve to be celebrated.

So, in honor of the internet’s rediscovery of how menschy Black is, we thought we’d share some Jewish (and Jew-ish) facts about this prolific, creative, and loving Jewish dad.

1. Black was born Thomas Jacob Cohen to Judith Love Cohen and Thomas William Black, two engineers on the Hubble Space Telescope(!). His mother was Jewish, and his father, who was raised Protestant, converted to Judaism, because, as Black said in an interview, “he was into Judaism.” His father stopped practicing the religion after the two divorced when Black was 10.

2. Before we get into more about Black, we want to take a moment to admire his Jewish mom. She was born in Brooklyn in 1933, the daughter of Sarah (Roisman) and Morris Bernard Cohen. By fifth grade, Judith had a profitable side gig: writing kids’ math papers for them. She wanted to be a math teacher, and ended up getting a scholarship to study engineering in Brooklyn College, and got a Master’s at UCLA, and became an aerospace engineer.

3. After Black’s mom retired in 1990, she and her third husband, David Katz, started publishing children’s books and running their own press called Cascade Press. Cohen wrote or co-wrote many of these books, including You Can Be a Woman Engineer. She passed away in 2016.

4. OK, back to Black! He was raised Jewish and had a bar mitzvah, though he says that he didn’t really keep practicing afterwards. “It was a celebration because I no longer had to go to Hebrew school, which is additional school,” he admitted on the H3 podcast.

5. As told the hosts of the H3, he still remembers some Hebrew words from his Hebrew school, like “shalom, aba, ima, ‘ma nishtana ha’layla hazeh mekol haleilot,’” he said, referring to the first line of the Passover Four Questions.

6. Black started acting as a child, and one of his first gigs was a commercial for Pitfall, a jungle-themed Atari game. (A premonition for his future starring role in the Jumanji franchise?)

7. Black didn’t have an easy childhood — he got into trouble and had substance abuse problems. He struggled with his parent’s divorce and with the death of his older brother, Howard, who died of AIDS at age 31.

“Devastating” is how Black described the loss. “He was a big influence on me,” Black told Parade. “He took me to my first rock concert. I was 11; he was 23. He was so vibrant, creative, amazing. He shaped my taste in music.”

8. Black found solace working with a school therapist. “Being raised a Jew, I didn’t have any kind of confessional,” he told Parade. “I couldn’t talk to my parents about the things that I was most guilty about. My dad loved me very much, but I needed someone who wasn’t judgmental at all.”

Working with the therapist,“I spilled my guts, telling him I felt guilty about stealing from my mom to get money for cocaine. I cried like a baby,” he said. “It was a huge release and a huge relief. I left feeling euphoric like an enormous weight had been lifted from me. It changed me.”

9. Before his big break, Black, who studied theater for two years at UCLA before dropping out, had many minor TV and movie stints. One of them was 1999’s Heat Vision and Jack, a pilot directed by Ben Stiller. Black played a former astronaut with superpowers; his nemesis was played by Jewish actor Ron Silver, playing himself.

You can watch the entirety of this pilot episode below:

10. Black is also well known for being part of Tenacious D, with Kyle Gass, whom he met when they were part of an acting troupe called The Actors’ Gang. One of the band’s greatest hits is the 2001 song “Tribute.” Ben Stiller makes an appearance in the song’s iconic video — spot him around the four-minute mark below:

11. This wasn’t Black and Stiller’s last collaboration — the fellow Jewish dad cast Black in his 2008 cult hit Tropic Thunder. During the shooting of one scene, in which Black gets carried on a water buffalo, Black was violently thrown off the animal. Luckily, he was mostly unscathed.

It turns out the the buffalo was grumpy about carrying Black was because it was pregnant! Its foal ended up being named…. you guessed it… Jack Black!

12. Black’s breakout role was in High Fidelity as the snarky but lovable Barry Judd, a record store clerk who gives an amazing performance of Marvin Gaye’s “Let’s Get It On.” Many of the movie’s scenes were shot in the Brooklyn record store Rough Trade, which was founded by British Jewish record distributor Geoff Travis, who’s said his experience volunteering on a kibbutz was good training  for the music business.

13.  Black made a guest appearance as a successful Jewish doctor, Isaac Hershberg, on Will & Grace (*insert stereotypical jokes about Jewish mothers’ dreams here*). Here he is performing a medical exam on Will:

14. Black may be most famous among kids for Kung Fu Panda, in which he dubbed the title character. Black said one of the most challenging and exciting parts of working on that franchise was working with his idol, fellow Jewish dad and actor Dustin Hoffman, who voiced Master Shifu.

16. Black met his wife, Tanya Haden, a musician and artist and one of triplet daughters of famed bassist Charlie Haden, at his high school, Crossroads (also attended by stars like Jonah Hill and Kate Hudson). The two only started dating in 2005, and married in 2006. They are adorable together, and they’ve even collaborated on a funny book about their two meetings with President Barack Obama.

Haden also has Jewish roots, and Black says that they use her grandfather’s haggadah for their Passover seders.

18. That’s right, both boys had a brief stint in Jewish day school. On an episode of Conan, Black recounted enthusiastically singing “Chad Gadya” to one of the school administrators to help his sons get into the school:

19. Black is obsessed with “Chad Gadya,” the Aramaic song we sing at the end of the Passover seder. He says it’s actually a metal song! He recorded a version of the song for the album “Hanukkah+” (where he also sang a version of “Oh, Hanukkah”).

Here’s an animated video he released of himself singing the song:

20. Speaking of Hanukkah, Black loves celebrating the holiday! He is really good at reciting the Hanukkah blessings (you can listen to him doing that here). We’ll just be here waiting for a full album of Jewish songs and prayers from Black, please and thank you.

21. Of course, Black doesn’t only sing Jewish songs! In one of his most critically acclaimed films, Barry, he had to sing gospel music. As a metal singer, he found himself drawn to gospel — which he feels has similar sensibilities — though as he said on Conan, he had never sung it before: “Being raised a Jew, I didn’t sing the songs of Christ.”

22. Black has been in a lot of kids’ movies and franchises — and even his youngest co-stars agree that he is a total mensch to work with.

In an interview with Vulture, Maryam Hassan, who played Tomika in School of Rock, recounted the experience of working with Black: “He’s a big kid,” she said. “I never felt anything like, ‘Oh my God, I’m on the set with Jack Black.’ He totally dispelled the notion of how a movie star would behave. He played games with us all the time, sang all the time, and made up songs for us when we weren’t shooting. It was really easy and fun to work with him, and he made all of us feel so comfortable, especially since most of us had never acted before.”

23. Black makes a special appearance in Waffles + Mochi, Michelle Obama’s new Netflix show starring the eponymous puppets. Black joins the puppets at restaurant Din Tai Fung, which has, according to the show, the best soup dumplings in the world. Here, Black learns that to make the perfect soup dumpling, you have to fold it 18 (chai!) times.

24. There are truly so many wonderful things about Black, but for now, we’ll just leave you with a tweet from 2016 in which comedian Jackie Hoffman first discovered that Black was also Jewish:

@JewishComedians is Jack Black Jewish? That makes me so happy