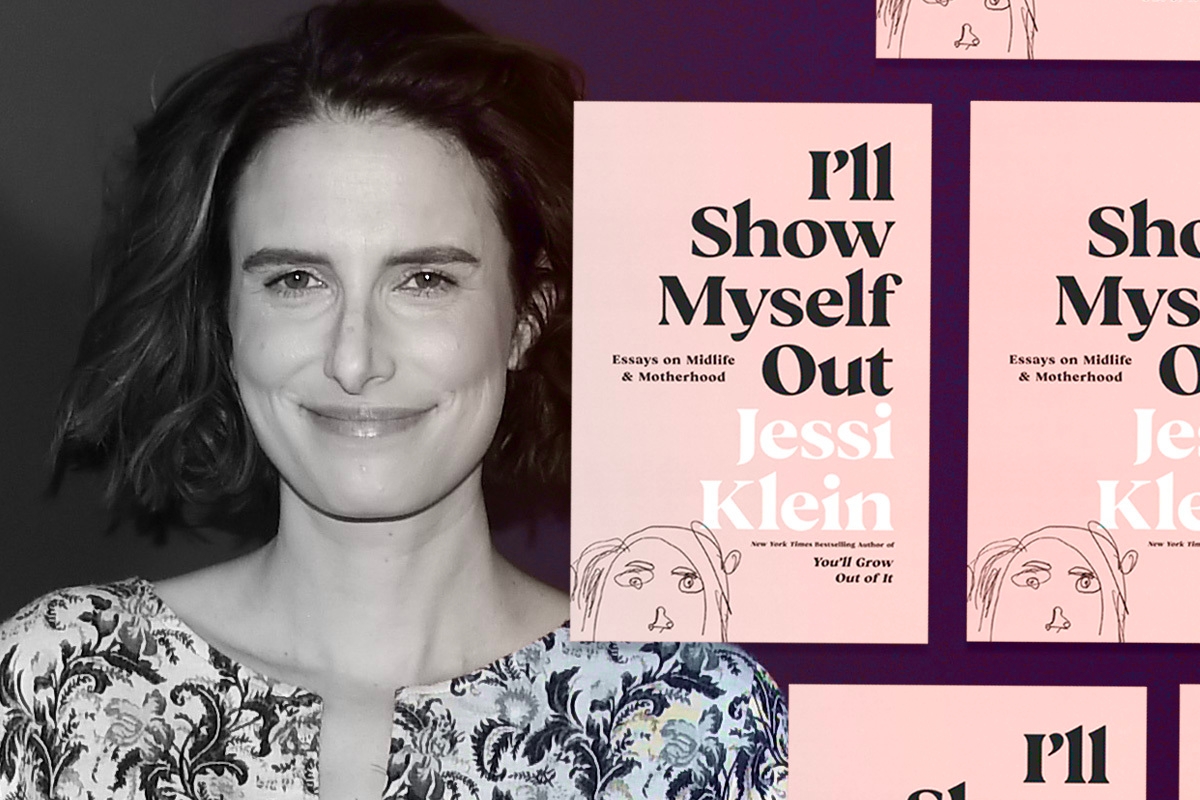 Jessi Klein’s latest book on motherhood isn’t technically Jewish — but it feels Jewish. Maybe it’s the self-deprecation coursing through its pages. Maybe it’s the worry that underscores the essays about parenting her son, Asher.

“I very much identify as a Jewish mom,” Klein tells Kveller over the phone. “I recognize the things in me that are kind of culturally specific. A lot of the anxieties, a lot of the ruminating — which probably everybody deals with to some degree, but I think Jewish moms know that we specialize in.”

“I’ll Show Myself Out: Essays on Midlife and Motherhood” is Klein’s second book of essays. Her first, “You’ll Grow Out of It” came out in 2016. You may also recognize Klein as the head writer and producer of “Inside Amy Schumer,” or the voice of Jessi on Netflix’s animated cult hit “Big Mouth.” Recently, she served as showrunner of the hilarious new Showtime show “I Love That For You,” where Klein says the Jewish mother really popped out.

“It’s the first time in a while I’ve been on set and I feel myself Jewish momming everybody,” she laughs. “I don’t think it’s a bad thing. I think a Jewish mom is a very caring, beautiful kind of mom.”

The caring way Jessi parents Asher comes through clearly in her essays, even as she admits she has no idea what she’s doing and often feels like she’s failing. These are the kinds of books on motherhood that I gravitate toward; the kinds I’m most likely to recommend to a friend. And I’m absolutely recommending “I’ll Show Myself Out” to all of you, right now. Through humor and the aforementioned self-deprecation, Klein makes me feel like maybe I’m not completely screwing up my kid (or at least if I am, other people are too?)

“I know the kids love to say “normalizing,” but there’s something to normalizing that motherhood is a real ‘and’ experience,” she says. “You can love your kid more than anything in the world and still not like parenting a lot of the time.”

Kveller spoke with Klein about the Jewish traditions she hopes to pass on to Asher, her own Jewish mother, and what it was like to go back to a career in Hollywood after taking time off with a newborn.

The show “Big Mouth,” where you’re both a producer and voice actor, is largely about the horrors of adolescence. Does your experience on the show make you worried about parenting a kid going through puberty?

It’s funny, I just recorded “Big Mouth” this morning. No, you know, I think it’s just checking back in with all those feelings and having a lot of empathy for them. If anything, I think I’ll be better prepared. I’m kind of glad I’m getting the boot camp again.

You have such a dynamic career, with your showrunning work as you mentioned and voicework. Were you glad to get back to work after Asher was born?

I was really glad to get back to work. I had Asher when I was almost 40, and had a lot of my identity wrapped up in what I do. I went back to work when he was around 6 weeks old, and  just walking out the door to go to an office for three hours… I just felt a little bit like myself again. Those things feel really scary to say for some reason.

But I completely get it, and I felt the same way. Have you noticed that Asher has your sense of humor?

It’s tough to parse out at this point because kids at this age — it’s a cliche but, you know, kids say the darndest things. He’s just at an age where the things that come out are really bizarre and hilarious. But I like to think that perhaps some of my personality in the comedy department will rub off. He certainly makes me laugh.

You wrote in the book about how Asher has been cautious since birth: “I suspect this can probably be traced directly to my pessimistic little genes, although it’s impossible to say how much of his inborn skepticism exists due to cosmic chance, and how much is inherited Jewish trauma.” Can you say more about that?

There’s a lot being written right now about inherited trauma — like, is there a physical thing about it? Is it just cultural?  At the very least, he’s definitely my kid.

What are some of the ways that you’re hoping to pass Judaism on to Asher?

It’s something I just started thinking a lot more about last year because when he was really little I wasn’t feeling the need to figure out our version of what these rituals look like. This year we did a little seder — he just learned how to read and he read the four questions — talk about a kvell. I fully sobbed.

My parents did a kind of pared-down version of the big holidays, but it worked insofar as I kind of got the nuggets. I’d like to make sure he has the nuggets. And I think it’s important, you know, especially in the world that we live in, to know who you are and understand that being Jewish is a cultural identity and to talk about it.

What’s your relationship with your Jewish mom? How do you feel like you’ve learned from her?

I think some of it is just generational. I’m just, like, a therapized Jewish mom — I’ve been in therapy for 20 years and my mom is of the generation where that isn’t as common. And so I think I’ve spent a lot of time reflecting on and therapizing my Jewish mom issues, and I think she just kind of is. But, you know, she was definitely always someone who was very worried about every little sneeze and cough. And obviously, we’re in a pandemic now and that really supercharges the Jewish mom stuff. But even before the pandemic I was always kind of like that, too. I just think we pass down these anxieties in these very specific ways and I see us having a lot of these similarities.

What are you hoping people take away from your book?

I think motherhood can be such an isolating experience and feels like there’s so much judgment, and it’s easy to internalize all the judgment. I hope people can put the book down and say, “I’m doing a good job and I’m not alone.” To feel some sense of that — even the dark, weird feelings that you’re having are really common.