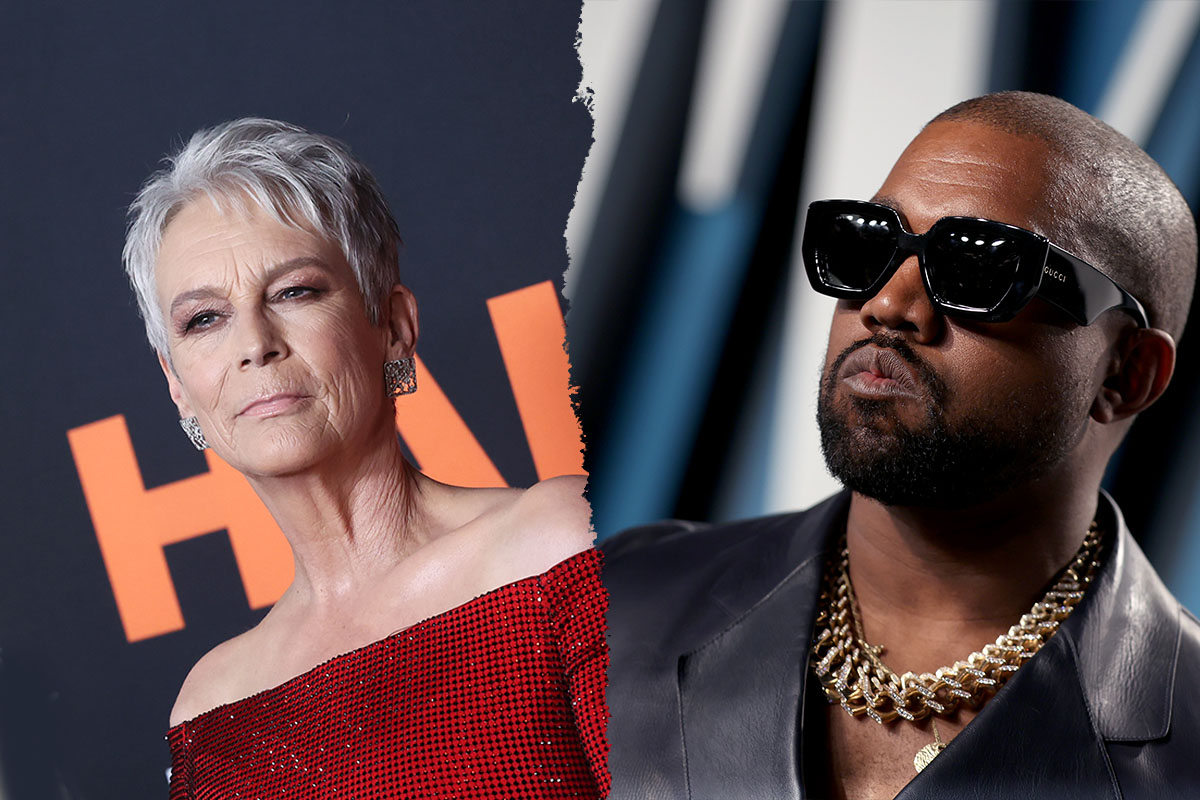 Jamie Lee Curtis is currently promoting “Halloween Ends,” the final installment in the famed horror franchise. But this week, the actress — along with many Jews in this country — woke up to a case of real life horror.

“I’m a bit sleepy tonight but when I wake up I’m going death con 3 On JEWISH PEOPLE,” rapper, producer and designer Kanye West, who goes by Ye, tweeted, misspelling the military state of alert “defcon 3.”

In the same tweet, West claimed that he can’t be antisemitic because “black people are actually Jew also” but added that Jews “have toyed with me and tried to black ball anyone whoever opposes [their] agenda,” feeding into antisemitic conspiracy theories about Jews being puppet masters and part of an evil kabal.

Many are citing West’s bipolar disorder as a way to mitigate his statements, which unfortunately adds to stigma against mental illness. The truth is there is no excuse for someone with as big a platform as West’s — over 31 million followers on Twitter — to share vile antisemitic sentiments at a time of rising hatred against Jews and other minorities.

Curtis was infuriated when she saw the tweet, which has since been taken down. In an interview with Hoda Kotb of “The Today Show,” the actress said that after she read the words, she instantly “burst into tears.”

On her own Twitter, the Jewish mother of two (and godmother of two!) invoked West’s responsibility as a father of four, Yom Kippur, as well as the Holocaust, writing: “the holiest day in Judaism was last week,” referring to Yom Kippur. “Words matter. A threat to Jewish people ended once in a genocide. Your words hurt and incite violence. You are a father. Please stop.”

Curtis has direct connections to the Holocaust. She recounted to Hoda, as she choked up, her eyes filling with tears, that the first thing she thought of when she saw the tweet was her grandparents.

Curtis’ dad is, of course, actor Tony Curtis, who was born Bernard Schwartz. His parents were both Hungarian Jews. Starting in ’90s, he, along with Jamie and his daughter Kelly Curtis, got involved in Jewish causes in Hungary, helping to finance the renovation of the Great Synagogue in Budapest. Tony also co-founded the Emanuel Foundation for Hungarian Culture, named after his father, which helps restore local synagogues and Jewish cemeteries.

Last year, Jamie visited Mateszalka and helped inaugurate the Tony Curtis Museum and Cafe, located in her grandfather’s old synagogue, which her father first visited, along with the town’s Jewish cemetery, in 1987. “A lot of the stones were toppled over, not from vandals as much as from time,” he recalled in a 1992 interview. “There they sit, silent survivors of that period of time. We must maintain those monuments as an education for all Hungarian young people.”

“The entire Jewish population [of the town] was exterminated,” Jamie wrote on Instagram about the pre-opening of the museum. “But the building stands as a living tribute to those who lived there and continue to live there.”

Curtis called West’s behavior “abhorrent” — “as if Jewish people haven’t had it bad enough,” she added.

Kotb was obviously moved by Curtis’ powerful reaction. The journalist and TV presenter said that in all her years of watching Curtis and interviewing the 63-year-old actress, she had “never seen [Curtis’] eyes well up in anger like that.”

Curtis added that she “hope[s] [West] gets help, and I hope his children get help from him.” She also criticized the people who didn’t speak out against West’s statements —  “If we aren’t reacting, who are we?” Amen.

The actress also decried West using his large platform to “pour bile” into people’s lives,” sharing her concern about his many teenaged followers who are “so vulnerable.”

Antisemitism isn’t the only type of hate Curtis is using her platform to decry, nor the only type of prejudice she has a deep connection with. “I have a trans daughter,” she told Spanish media this week, referring to her daughter Ruby, whose wedding she officiated earlier this year.

“There are threats against her life, just for existing as a human being,” Curtis said. “There are people who want to annihilate her, her and people like her. The level of hatred is as if we had not learned from fascism, as if we hadn’t learned what the result of that is: the extermination of human beings.”

Curtis isn’t mincing words, making direct connections between both transphobia and West’s tweet and the destructive power of hatred. The incredible actress says that the Hillel line, “If not me, who, if not now, when?” gave her the power to reclaim her career and her voice at 60. We’re so glad that she’s using that voice for good.