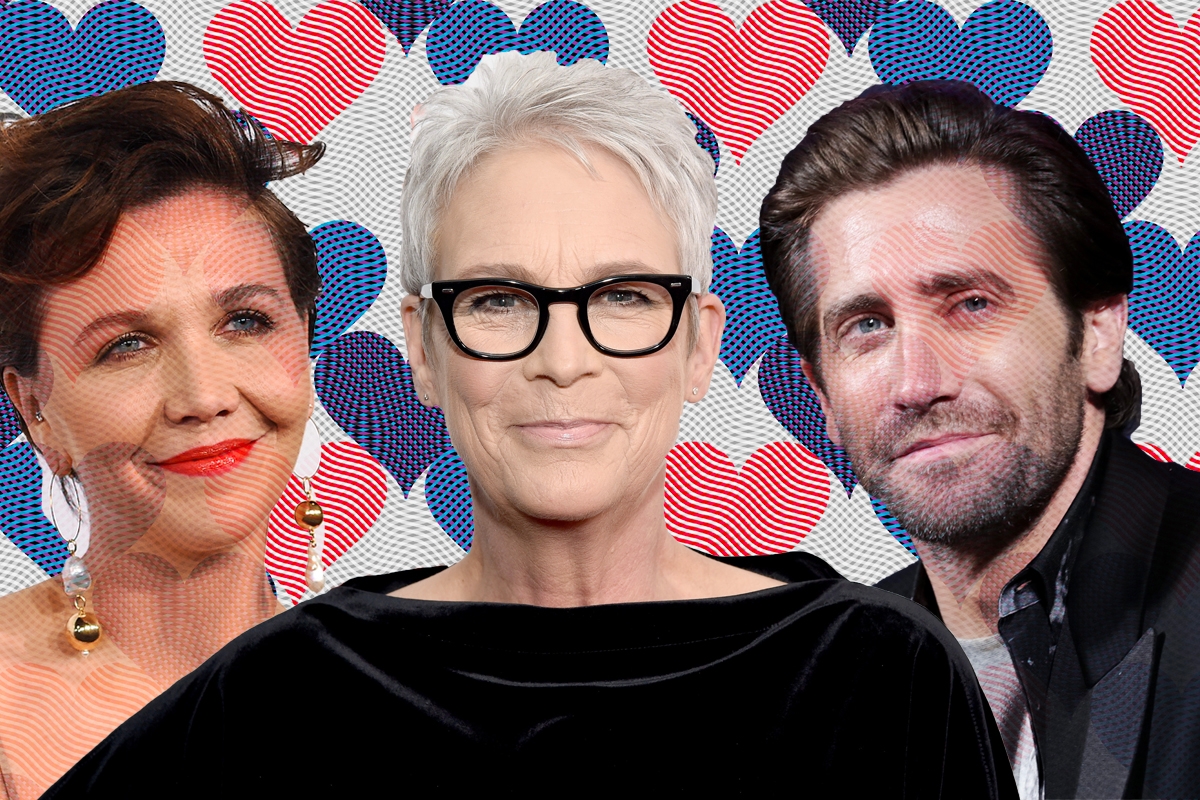 This is just so stinkin’ cute. Apparently, Jamie Lee Curtis is not just a loving mom to her two daughters, Annie and Ruby. She’s also a super sweet godmother to famous siblings Jake Gyllenhaal and Maggie Gyllenhaal.

Since the actors’ parents are not on social media, it seems that Curtis has taken the role of being their surrogate online Jewish mom. Curtis regularly takes to Instagram to kvell about the famous Jewish siblings and their myriad recent achievements — with lots of candor, tags and ALL CAPS, as one does.

The renowned actress recently went to support Jake Gyllenhaal at a Q&A about his newest Netflix film, “The Guilty,” coming out on October 1. So impressed was she that posted an effusive message about the film on Instagram that very day.

“I am still recovering from watching the career peak performance from Jake. His collaboration with Antoine is a searing portrayal of conflict and the confluence of truth and lies. Gripping and gut-wrenching. A master class in filmmaking and film acting. Proud godmother, friend and fan,” she wrote.

But she didn’t stop there — like a true supportive Jewish mama, Curtis posted about this film not once, not twice, but three times in the five days since that Q&A session. (She also previously reposted Jake’s own Instagram post about the film with a “PROUD GODMOTHER ALERT” caption, because, of course.)

This past Saturday, she shared a truly glorious photo of the gifted actor and appetizing merch designer wearing a fuzzy pink sweater on the cover of “Style” Magazine. (He is giving comfy pandemic mom vibes and it is all very good).

“My friend @jakegyllenhaal is GUILTY of being talented @theguiltynetflixfilm and handsome and smart and brave and soft. Multi layered. Multi talented. Funny AF,” she captioned the picture. “Proud of him.”

Jake, already a purveyor of Jewish dad jokes despite not having reached parental status, responded with: “Thank you [for] letting me borrow your sweater for that shoot. 🙊❤️.”

But Curtis hasn’t just been heaping praise on Jake. She’s also been kvelling about his big sister and her fellow Jewish mom of two, Maggie Gyllenhaal — who this month won a Venice Golden Osella for best screenplay for her directorial debut, “The Lost Daughter.” The movie, which is coming out on Netflix on December 31, is based on the Elena Ferrante book of the same name and stars Olivia Colman, Dakota Johnson, her hubby Peter Sarsgaard and handsome British actor Oliver Jackson-Cohen, whose father is an Egyptian Jew.

After Maggie’s Venice Film Festival victory, Curtis posted an appropriately all-caps celebration of the achievement, to which Maggie replied: “Thank you my friend. I wish we’d been there together.” Aw!

Curtis also recently shared a post of herself and the actress/director — in matching smiles and ying-and-yang black-and-white outfits — at the opening of the Academy Museum. “We missed each other’s smiles… but felt connected by the beauty and creativity… My black to her white! God mother and God daughter.”

Maggie, whose full name is actually Margalit, also shared a text that Curtis sent her with the pictures, taken by photographer Greg Williams. “Woke up to this text from my godmother,” she wrote, adding hashtags: “#sisterpost #ladieslovingladies”

We can’t with how adorable these three are!

In another recent post, of a picture of Maggie and Jake embracing upon the latter’s return to Broadway, Curtis wrote: “Proud of my God-children and friends.” She also shared all of their different titles (ACTORS! PRODUCERS! WRITERS! DIRECTORS! HEAR YE HEAR YE!) in all caps and tagged all of their recent projects. Because, she is thorough, of course!

Curtis also divulged back in 2018 that it was Jake who convinced her to return to the “Halloween” movie franchise, 40 years after the 1978 original, which she starred in as Laurie Strode, the only survivor of a Halloween night massacre by killer Michael Myers.

It was Jake who connected her with David Gordon Green, who directed the reboot, and with who directed him in the 2017 movie “Stronger.” Jake told Curtis that working with Green was the “greatest experience of his professional career,” which led Curtis to give the director a call. The first “Halloween” sequel starring her came out in 2018, and a second one, “Halloween Kills,” is coming out this October.

Now, Curtis has, in the past, referred to herself as the Gyllenhaals’ “unofficial” godmother — which is actually quite a Jewish thing to do since, as you may know, Jews don’t traditionally have official godparents. Sure, there is the sandek, who holds the baby at an Ashkenazi bris, a word that has been translated into godfather (also the Hebrew title for the movie “The Godfather” is “Ha’Sandak”). But typically that role is confined to one Jewish ritual in the child’s life.

Whereas in Christianity the role of godfather entails being in charge of the children’s religious education, the role of sandek in Judaism is merely an honor. While we don’t know if there are any legal and obligational implications to Curtis’ role as Maggie and Jake Gyllenhaal’s godparent, Curtis’ does seem to mostly use it as an excuse to schep naches and boast in their achievements — and honestly, we are here for it (our name is Kveller, after all)!

Curtis is, it should be noted, is equally wont to kvell about her own two daughters with her husband, Jewish screenwriter Christopher Guest, whom she married in 1984. However, they both live much more private lives than the Gyllenhaal siblings. Her oldest daughter Annie Guest, who is 34 and a dance instructor, married Jason Wolf back in July of 2019. The Jewish groom wore a kippah and smashed the glass. “A spectacular celebration yesterday at our home for the marriage between our daughter Annie and Jason Wolf. A loving, familial blending with laughs and tears and truth. Proudest MOB [mother of the bride],” Curtis wrote in celebration of the occasion.

A spectacular celebration yesterday at our home for the marriage between our daughter Annie and Jason Wolf. A loving, familial blending with laughs and tears and truth. Proudest MOB @wesgordon @zacposen @twofoldla 📷 @jamesmoesweddings and me! pic.twitter.com/8AOrvN5X3N

Curtis’ youngest daughter, Ruby, a game editor, is also about to tie the knot. Curtis recently told AARP magazine that she and Guest “have watched in wonder and pride as our son became our daughter Ruby. And she and her fiancé will get married next year at a wedding that I will officiate.”

We admire how loving and nurturing Jamie Lee Curtis is to all her children, and honestly, we’d happily volunteer to be her godchildren any day of the week — please adopt us, Jamie!