Jewish Mom Ester Steinberg's Comedy Special Is Real, Raunchy, and So, So Good – Kveller
Skip to Content Skip to Footer

Jewish Mom Ester Steinberg’s Comedy Special Is Real, Raunchy, and So, So Good 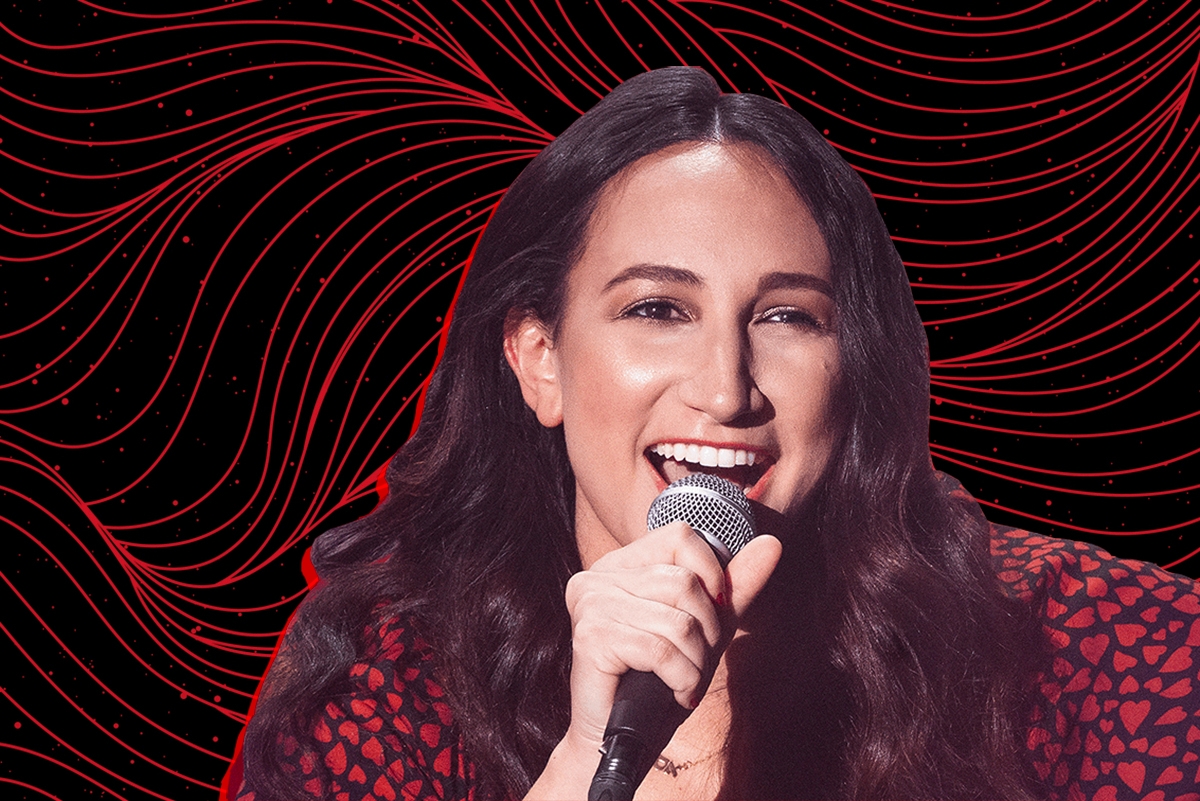 Veteran comedian Ester Steinberg had a baby recently — a really adorable one of human flesh. But also, since we love to call women’s professional projects “babies,” she recently released into the world a comedy special — one that is very Jewishly named Burning Bush. (Yes, it is a reference to her vagina. But also, her son’s name is actually Moses.)

You can currently rent the special on Amazon Prime for about the price of a box of Ring Jells (that’s $3.99, though prices for Ring Jells may vary). And while consuming both is a profoundly Jewish experience, watching Steinberg’s standup comedy is a much more satiating one.

Steinberg — who, naturally, once had a guest role in a Marvelous Mrs. Maisel episode — was just six weeks postpartum when she filmed this pandemic-friendly drive-in special in California. Flying in from Brooklyn, and pumping on a plane, these hurdles somehow enhance the viewing experience. Her audience is in cars, socially distant, but we hear and see them honking and laughing at her very Jewish jokes.

Steinberg’s jokes don’t necessarily defy Jewish stereotypes — after listing feels like particularly dated conjectures about what a Jewish conversion class could entail, Steinberg qualifies it by saying, “I’m not trying to perpetuate Jewish stereotypes, I’m just describing my own mother.” However, unlike the aforementioned box of Ring Jells, none of these jokes are ever stale. Steinberg’s Jewish jokes aren’t a comedic crutch — they’re heartfelt, deeply specific, raunchy, and delightfully unpredictable. She doesn’t shy away from Judaism deep cuts and, honestly, Burning Bush is one of the few instances in which I’ve ever found circumcision jokes truly enjoyable.

Steinberg delights her audience with tales about her Jewish mother, who apparently has a rift with her Miami neighbors on both sides, because, as Steinberg says, “She’s from Israel so she’s at war with everyone.” While visiting a Holocaust museum, she and her mother avoid paying the $35 entry fee because, as her mother tells a staffer, “Sir, I think we’ve paid enough.”

She tells raunchy tales about having a yechud room (the room in which a newly-hitched Jewish bride and groom traditionally get to spend some time alone after their nuptials) at her Jewish wedding. (That wedding was to fellow Jewish standup comedian Noah Gardenswartz, who is the executive story editor of The Marvelous Mrs. Maisel.) She winningly calls herself a “Half hummus Jew, half-bagel Jew,” a monicker I plan to adopt for my own half-Israeli, half-Jewish American son, because, as Steinberg astutely observes, “It’s a combo platter. It’s delicious.” She jokes about having taken on her husband’s very Ashkenazi last name — inspired by the soon-to-be-divorced Kim Kardashian West —  people keep thinking she’s a law firm.

One stereotypically Jewish element this special lacks — and what makes it such a particularly welcome treat during these fraught times  — is neurosis. It’s possible that Steinberg is an anxious Jew, but that anxiety does not make it into her comedy. There’s something wonderfully unapologetic, guiltless, and almost wholesome about it, despite the circumcision and vagina jokes.

I was particularly struck by this when Steinberg tells the story of her son’s birth — an induced, 38-hour labor that ended with a Caesarian. Those are roughly the parameters of my own, fairly traumatic birth experience; an experience that still fills me with anxiety almost three years later, as I prepare to give birth for the second time.

And yet, Steinberg’s description of this scenario — a fairly hellish one for any mother to endure — is incredibly entertaining. Instead of being triggered, or wanting to turn the special off, I, for the first time, found a way to laugh at a birth experience that mirrored my own. Not only did she find a way to make a complicated birth funny, without making light of the experience, she even managed to work in a Britney Spears joke — the sign of true comedic genius.

In 40 minutes, Steinberg takes us on a trip through marriage, motherhood, gender disparity, pumping, the cult of the self-help book The Secret — and every stop is truly wonderful. Burning Bush is smart and incisive and just incredibly good. It’s the perfect indoor date night, or girls’ night in watch, preferably with a spread of hummus and bagels (and possibly, Ring Jells. Whatever floats your boat).

You can watch Burning Bush here.