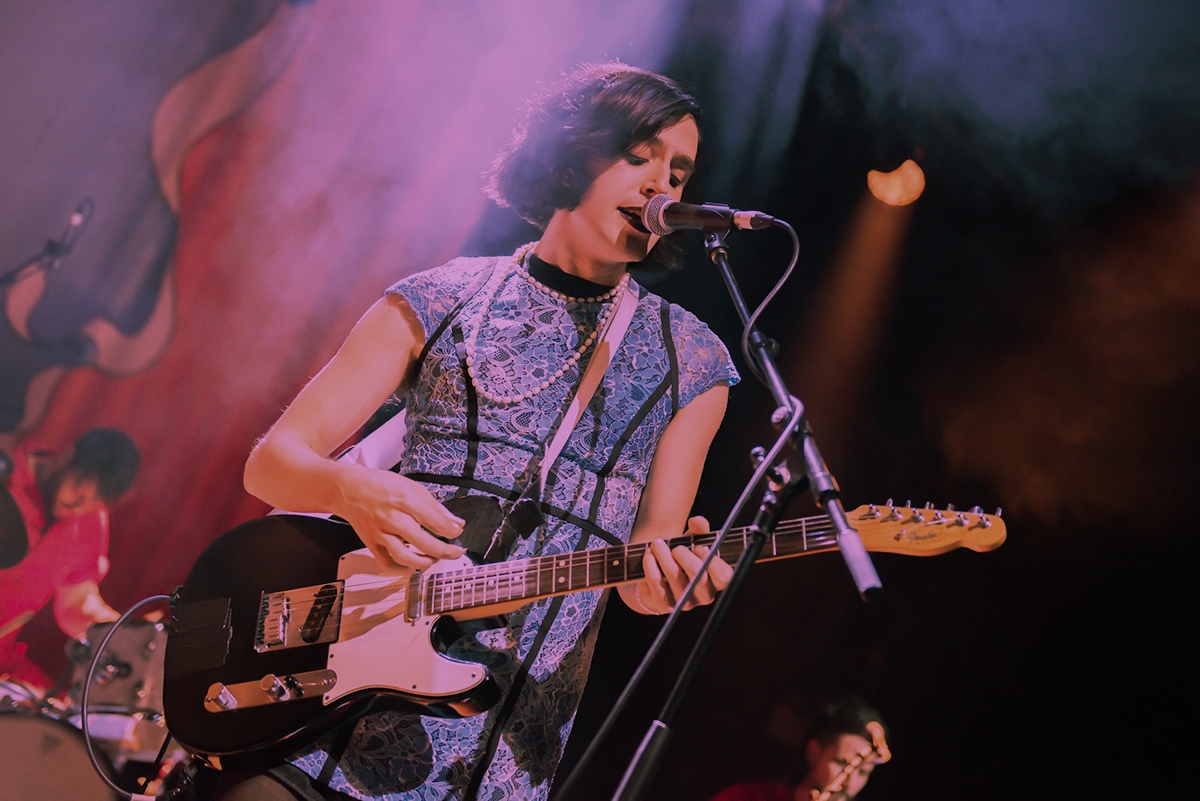 On Wednesday night, Jewish indie rocker Ezra Furman revealed that she is a trans woman — and a mom!

In an extremely moving Instagram post — seriously, read her words and take a gander at those pics, it’s impossible to keep your eyes dry — the musician, 34, briefly explains her journey, her experience of motherhood, and why she’s sharing her story.

“I wanted to share with everyone that I am a trans woman, and also that I am a mom and have been for a while now (like 2+ years),” Furman begins.

The post also features a series of photos; in the the first, a close-up, she’s wearing a gorgeous shade of red lipstick, as well as a very prominent chai necklace (swoon!). In the second, she’s lounging on a bed with a baby snuggled by her side. The baby’s face is obscured, but their little foot is firmly implanted in Furman’s armpit — a familiar pose for anyone who’s raised a little one.

“About being a trans woman: for my own reasons I have been hesitant to use these words, especially the ‘woman’ word,” she writes. “I have often described myself as non-binary, which maybe is still true (I’m just gonna sit with that question for the moment). But I’ve come to terms with the fact that I am a woman, and yes for me it’s complex, but it’s complex to be any sort of woman. I am very proud to be a trans woman and to have come to know it and be able to say it. This has not been an easy journey.”

Next, Furman — who, along with providing much of the soundtrack for the Netflix hit Sex Education, has directly addressed her Jewish identity in her songs — touches on the subject of motherhood. “About being a mom: there’s enough said in public about the magic of parenthood,” she writes. “It is beautiful and holy and I love it — that’s all on that subject. I have not yet mentioned in public that I’m a parent because I have been afraid of being judged and grilled about it as if it’s anyone’s business other than mine and my family’s.”

“But. I’m telling you I’m a mom now for a specific reason,” she adds. “Because one problem with being trans is that we have so few visions of what it can look like to have an adult life, to grow up and be happy and not die young. When our baby was born I had approximately zero examples that I had seen of trans women raising children.”

She continues: “So here’s one for anyone who wants to see one. I’m a trans woman and a mom. This is possible. I never dreamed it was possible to be happy and self-realized and trans and uncloseted, and also become a parent. But it is and I am doing it. Because trans people deserve to pursue the lives we want, on our terms.”

We are in awe of Furman’s talent and honesty — and, of course, her fans are, too. There’s an outpouring of support in the comments on her post: “I have been listening to ur music for a while now, and I have and still will always look up to u, I am non binary myself but I sympathize with feeling like the answer is so complex,” writes one. “I rlly want to be a parent when I’m older, I wanna have a family and an adult life, and seeing this means so much to me, and it makes me feel like the life I want is possible, you are valid as who u are, thank you so much.”

Furman — who attended a Jewish day school in her hometown of Evanston, Illinois — has performed in tzitzit and is known to talk Jewish philosophy at live shows. As Miriam Schweiger wrote about a February, 2020 show for our partner site, Alma: “At the end of the concert, Furman put down her guitar and talked about a biblical idea that was on her mind. She talked about how Judaism teaches that people were made in the image of God, and that the way to get closer to divine power is to be vulnerable and full of love for the people around you.”

In recent years, Furman has been exploring her Jewish identity, becoming more observant and attending an Orthodox synagogue when she’s at home in Oakland, California. Back in 2016, Furman told JTA’s Gabe Friedman that she observes Shabbat and reads the weekly Torah portion while on tour. What’s more, she doesn’t play shows on Friday nights or travel on Saturdays.

We are so proud of Furman for being true to herself, and showing each of us that we are free to follow our own paths, too. Mazel tov, mama! We can’t wait to see what you do next.