The Best Jewish TV and Movies to Watch on Netflix 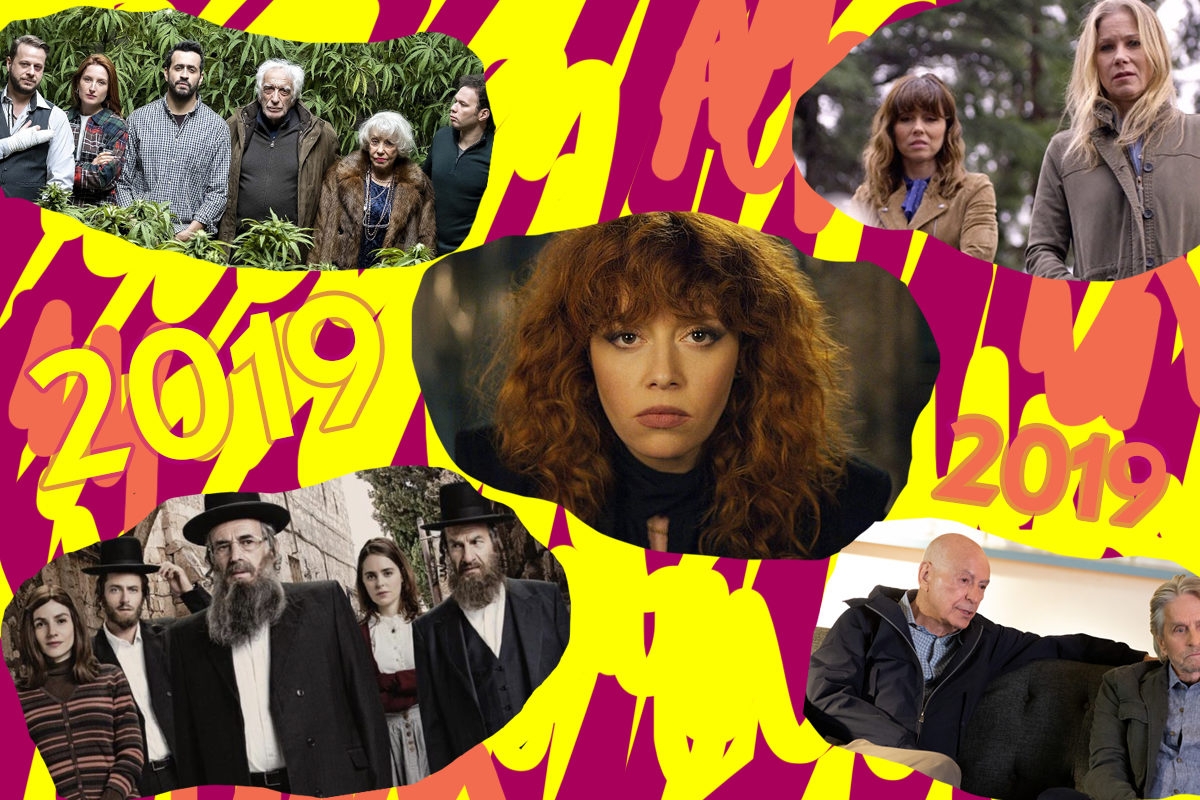 It’s been an amazing year for those who love to Netflix and chill. And by “Netflix and chill” I mean that in the literal sense: The streaming service offered up some truly incredible content in 2019. (Perhaps it’s been less of a notable year for our partners, who have been continually swatted away with an annoyed, “I’m watching this!”)

I’ve been in awe of the amount of good TV to come out of the streaming service, and just how Jew-y a lot of the excellent shows and movies really are. We’ve truly been bestowed with great Jewish representation on Netflix, from positive portrayals of Ultra-Orthodox Jews, to intimate looks at Sephardic families to non-Jewish comedians heaping praise upon their Jewish wives.

I don’t know what we did to deserve this boon of Jewish TV and film, but, hey, I’ll take it! Here’s hoping that 2020 proves to be even more abundant, content-wise, but in the meantime, let’s take a look back at all the Jewish and Jew-ish shows that made us laugh, cry, and feel proud to be members of the tribe.

Jewish actress Natasha Lyonne gave us this updated, strange, and deeply poignant retelling of Groundhog Day. It’s also very Jewish. As Natasha Vulvokov — who keeps experiencing her own death on her 36th birthday, only to end up back in the bathroom where she began her celebrations — Lyonne’s journey to stop the death-day loop she is caught in is both aided and hindered by Israeli drugs, rabbinical advice, and inherited trauma from the Holocaust. Russian Doll is a stand-out show in every way, and I’m so glad it’s coming back for a second season.

The best cranky old Jewish men in a TV show: The Kominsky Method

The second season of The Kominsky Method premiered this year, and while it tackled some important aspects of aging, it lacked some of the magic and a lot of the Jewishness of its first season. Still, the chemistry between Michael Douglas, who plays an out-of-work aging acting coach, and Alan Arkin who plays a successful retiring agent, is something to behold.

We got another season of the Dan Levy and Eugene Levy show this year, and the delightful comedy about a half-Jewish family’s riches-to-rags tale just keeps getting better. In a year in which our faith in humanity has been tested to the extreme, the warm glow of the love and the resilience the hilarious Rose family is exactly what we need.

In January 2019 we got the gift that keeps on giving: Shtisel, an Israeli show that originally dates to 2013 but landed on Neftlix this year and took the world by storm. The show, a family drama about the ultra-Orthodox Shtisel family of Jerusalem — makes for powerful and heart-wrenching TV, but it never vilifies or make a caricature of religion. We were promised a third season of the show this year, but that third season apparently ran into some setbacks. At the moment, we really do not know what will come next from Shtisel but we remain hopeful that our favorite ultra-Orthodox family will come back to the streaming service!

If you’ve watched any of Shtisel this year, you may have fallen pray to the Michael Aloni effect — a sudden fascination, bordering on obsession, with the show’s handsome and talented star. Luckily, he had a guest role in Greenhouse Academy, a teen show based on an Israeli show called The Greenhouse about an elite private boarding school. You can see him on the 4th episode of the show’s third season, which came out this October.

The most star-studded portrayal of a Jewish mom: Otherhood

Patricia Arquette plays an overbearing Jewish mom and convert in this highly watchable movie. It sometimes leans too heavily into stereotypes, but at other times it touches on deep truths about what it feels like to be a parent with an empty nest.

The quirkiest Jewish side character: The House of Flowers

House of Flowers is an excellent Mexican dramedy about a rich family that owns a famous flower shop, and has to face the fact that the source of their wealth is not as savory as they’ve been led to believe. It’s queer, camp, progressive and full of juicy twists and turns. It also features ones of my favorite minor Jewish characters of the year, Dr. Solomon Cohen (played by Jewish actor David Ostrosky), a quirky psychologist who has a strangely endearing way to get his clients, young and old, to open up: a sweet wonky sock-puppet named Chuy. It sound ridiculous — and it is, but it’s also incredibly enjoyable and wonderfully human. The second season of the show premiered on Netflix this year, and its third season in coming in 2020.

To be fair, the competition was stiff for this one. Mike Birbiglia’s talented Jewish wife contributed three amazing poems to his comedy special, The New One. But… Seth Meyers’ Jewish wife, Alexi Ashe Meyers, gave birth in a friggin’ lobby! You just can’t beat that. It’s clear the human rights attorney is his much better half from his comedy special, and the parts where he talks about her are when the special truly shines.

What is there to say about Tiffany Haddish? She’s fierce, she’s kind, she’s vulnerable and she’s funny af. The comedy special and concurrent bat mitzvah  (on Haddish’ 40th birthday, no less) is one of the absolute best things Jewish pop culture had to offer this year. Judging from what her rabbi told us about Haddish, from how she inspired other Jews of color to how she reacted to a humble gift from our queen Barbra Streisand herself, we all have a lot to learn from Haddish.

The best miniseries: The Spy

The spy, a dramatic retelling of the story of Eli Cohen, an actual Israeli spy who was executed in Syria for espionage, is a far-from-perfect retelling of an important chapter in Israeli history. But what really elevates this limited TV series is its star, Sacha Baron Cohen, who pulls off a convincing and moving portrayal of the real-life James Bond.

The French comedy about a half-Sephardi, half-Ashkenazi family trying to turn their kosher butchershop into a weed den is a delight. The cast is brilliant, the writing is funny and light.

The best rabbi scene: Dead to Me

This dark comedy from Jewish creator is truly excellent. It also has one of my favorite rabbi scenes — featuring the brilliant Jewish comedian Jenny Kober, who, playing a rabbi, delivers with an insightful interpretation of Jewish mourning.

This raunchy animated show about a puberty is dirty and funny and strangely kind of groundbreaking. The show, created by Jewish comedian Nick Kroll and his Jewish best friend Andrew Goldberg, follows the life of middle schoolers as their bodies change, It’s also incredibly Jewish (after all, puberty always coincides with bat and bar mitzvah season.) This year, the show also tackled menopause in a pretty hilarious and relatable way.

The best Paul Rudd vehicle: Living With Yourself

OK, I still don’t know what to make of this wacky Paul Rudd show about marriage, aging, and cloning. But I do know one thing: It has not one but two Paul Rudds (yep, Paul Rudd plays his own clone). And that’s more Paul Rudd than we could ever dream of.

The best Jew-ish shows we lost this year:

Tuca & Bertie: Jewish artist Lisa Hanawalt created this funny and insightful animated show this show about two bird BFFS who are struggling with love, relationships, trauma, and addiction, starring bat mitzvah girl Tiffany Haddish and comedian Ali Wong. This show had no Jewish scenes or characters, but it was an undeniably eloquent portrayal of what it feels like to live in a woman’s body, even if it is the body of an animated bird. It’s honestly a travesty that Netflix cancelled it.

The OA: There’s probably so much to be said about the Jewish connections to this mystical, spiritual show with a concept that’s honestly hard to describe. From creator Brit Marling and Zal Batmanglij, the show featured two amazing Jewish actors (Emory Cohen and Jason Isaacs), as polar opposites. Cohen, whom we loved in Brooklyn, is the sweet and sometimes naive love interest of Marling’s character, and Isaacs plays the evil doctor imprisoning the two, as he believes that they, with a handful of other supernaturally gifted individuals, have the power to move through dimensions. It is one of the strangest and best shows I’ve ever seen and I’m so sad to lose it.