Julian Edelman Has a Kvell-Worthy Response to Antisemitism Yet Again 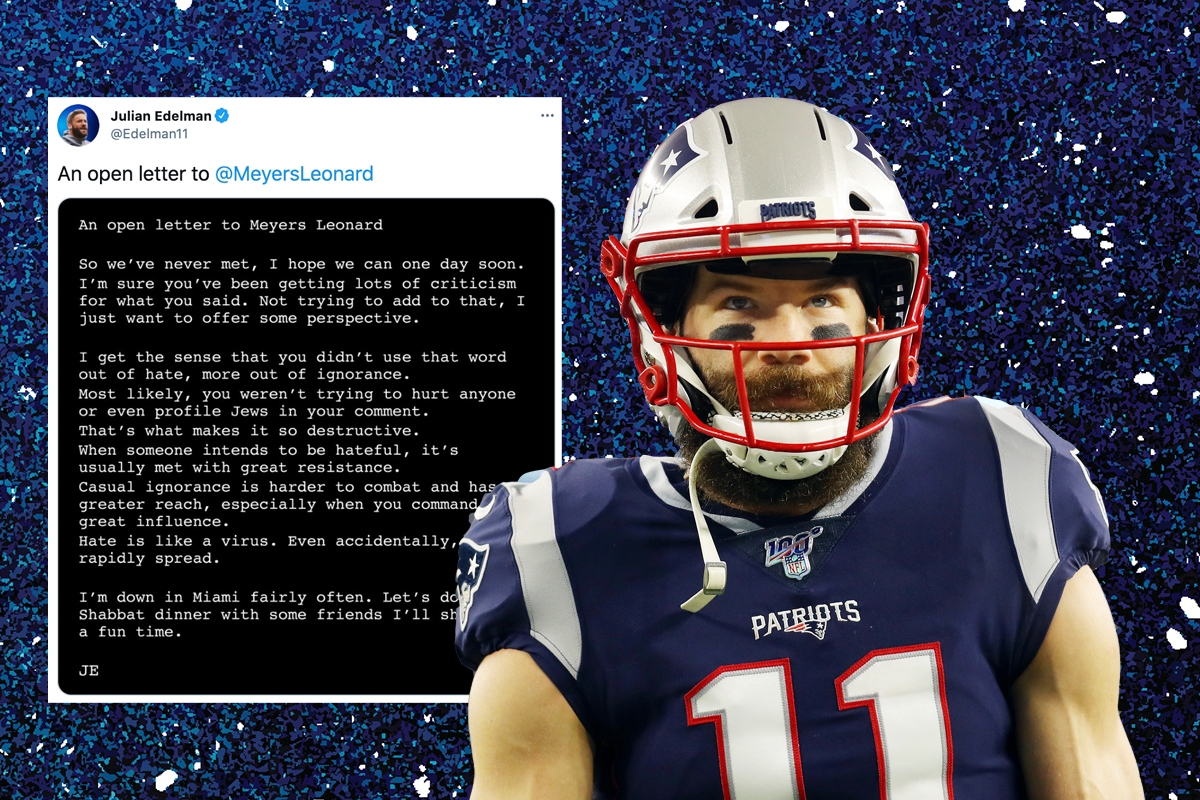 Back in July of 2020, the Jewish football player had a poignant and powerful response to NFL star DeSean Jackson, the Philadelphia Eagles wide receiver who posted several antisemitic posts on social media.

In a thoughtful video, he acknowledged that while he didn’t want to take anything away from the Black Lives Matter movement, he felt that it was important to speak out against the overt display of antisemitism. He didn’t just call out his fellow league player, however: He showed him compassion and even understanding, and invited him to meet him at the United States Holocaust Memorial Museum in Washington and have a conversation.

The conversation did happen, and  DeSean and Edelman kept in touch. “I think it was a healthy conversation. … I just wanted to not only show that I support my community but also show that I’m here to help people in my league because we’re all one,” Edelman recounted.

Now, there’s a new “antisemitism in sports” story in the news: The Miami Heat’s Meyers Leonard was caught uttering an antisemitic slur during a Twitch live stream of the video game Call of Duty on Monday evening. (He taunted other players by calling them a “k*ke b*tch.”)

Leonard, 29, has since apologized for his statement, claiming that he didn’t know the meaning of the slur. But the fallout was still harsh and swift: Leonard was suspended from his team, and lost his corporate sponsorships.

While Twitter is still, rightfully, aflame about this utterance — and many have also brought up the fact that Leonard was also the only one in his team who chose not to kneel during the national anthem — Edelman, 34, posted his own, measured response to the controversy. Addressing Leonard directly via an open letter on his social media accounts, Edelman offered his own perspective on what happened.

“I get the sense that you didn’t use that word out of hate, more out of ignorance,” he wrote. “Most likely, you weren’t trying to hurt anyone or even profile Jews in your comment. That’s what makes it so destructive. When someone intends to be hateful, it’s usually met with great resistance. Casual ignorance is harder to combat and has greater reach, especially when you command great influence. Hate is like a virus. Even accidentally, it can rapidly spread.”

It’s an excellent point and an important reminder that we all need to take accountability for our words and their ripple effects, whether they are said absent-mindedly or with intent.

As he’s done before, Edelman — who shares a daughter, Lily, with his ex, model Ella Rose — also offered to talk to and educate the NBA player.

“I’m down in Miami fairly often. Let’s do a Shabbat dinner with some friends and I’ll show you a fun time,” he wrote.

Just like with Jackson, Edelman is trying to make this an opportunity to help educate another player about the ails of antisemitism, and perhaps teach another professional athlete a bit about Judaism from someone who had an interesting Jewish journey of their own.

While Edelman didn’t grow up very connected to Jewish tradition, he did experience antisemitism on the football field. He came to Judaism in his 30s and has recently become outspoken about his love for the religion and culture. In the last few years, he’s become a sort of unofficial NFL ambassador for Jewish matters.

“I’m proud of my Jewish heritage, and to me, it’s not just about religion, it’s about community and culture as well,” Edelman said in that video statement addressed to Jackson back in 2020.

We definitely admire and respect Edelman’s mensch-y, conflict-bridging attitude when it comes to antisemitism.