Julian Edelman’s Response to Anti-Semitism Is Making Us Kvell 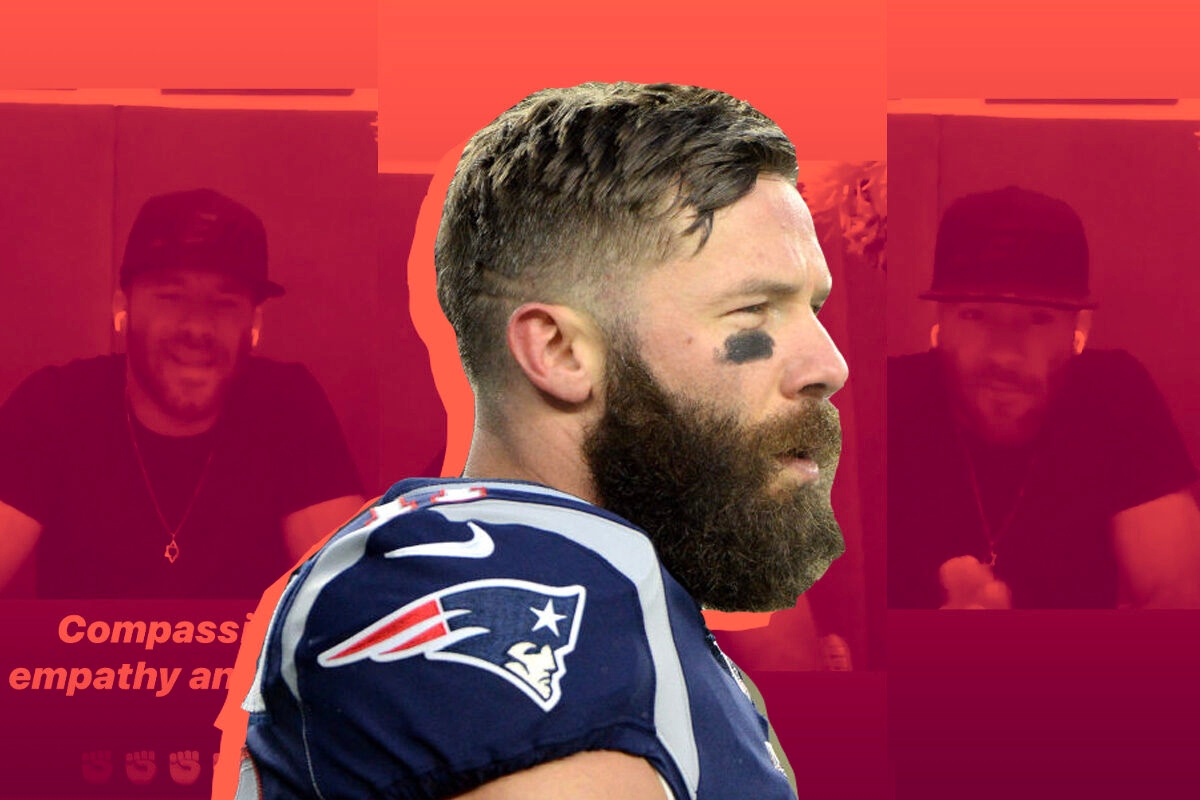 We love to kvell about Julian Edelman, a super sweet Jewish dad to 3-year-old Lily, and last year’s Super Bowl’s MVP. And today, we have another great reason to do just that.

The New England Patriots wide receiver put out a compassionate and heartfelt message on his Instagram to NFL star DeSean Jackson, the Philadelphia Eagles wide receiver who posted several anti-Semitic posts on social media, including two quotes attributed to Hitler, and one post praising Louis Farrakhan’s 4th of July address, which featured anti-Semitic canards. Jackson later deleted the posts and posted an apology.

In his video response, Edelman is shown visibly touting his Jewishness with his customary Star of David necklace (Edelman is often photographed with the large silver necklace). Edelman said he wanted to take some time before he responded to Jackson’s messages, because it’s a “complicated issue,” and that he respects Jackson as a player.

“I’m proud of my Jewish heritage, and to me, it’s not just about religion, it’s about community and culture as well,” Edelman, whose father is Jewish, tells the camera.

“I’m unusual because I only identified as Jewish later in my life,” Edelman, who only started embracing his Jewish identity in his 30s and announced back in March that he was studying for his bar mitzvah, explains.

“Whenever I encountered hatred, it never really felt like it was aimed at me,” the 34-year-old continued. “It was only after I became a part of this community that I learned how destructive that hate is. Anti-Semitism is one of the oldest forms of hatred, it’s rooted in ignorance and fear. I remember experiencing a bit of this hate in 2011 when I was called a kike on the football field.”

Still, despite the gravity of anti-Semitism, Edelman said that the conversation about racial justice and Black Lives Matter should be a the forefront: “I don’t want to distract from how important the Black Lives Matter movement is,” he said. He talked about how the Black and Jewish community have a lot in common: “They are both attacked by the ignorant and the hateful.”

“It’s really hard to see the challenges a community can face when you’re not a part of it,” Edelman said. “We need to listen. We need to learn. We need to act. We need to have those uncomfortable conversations if we’re going to have real change”

He ends the video with a proposition to Jackson: “Desean, let’s do a deal, how about we go to D.C., and I take you to the Holocaust Museum, and you take me to the Museum of African American History and Culture. Afterward, we grab some burgers, and we have those uncomfortable conversations. This world a little more love, compassion, and empathy.”

What a mensch! We love how Edelman spoke out against anti-Semitism, while still choosing to center the Black Lives Matter movement, reminding us of the important issues at hand.  We truly hope that Jackson and Edelman get to get together and have these important conversations soon.