These Jewish Celebrities Are Stepping Up to Say Black Lives Matter 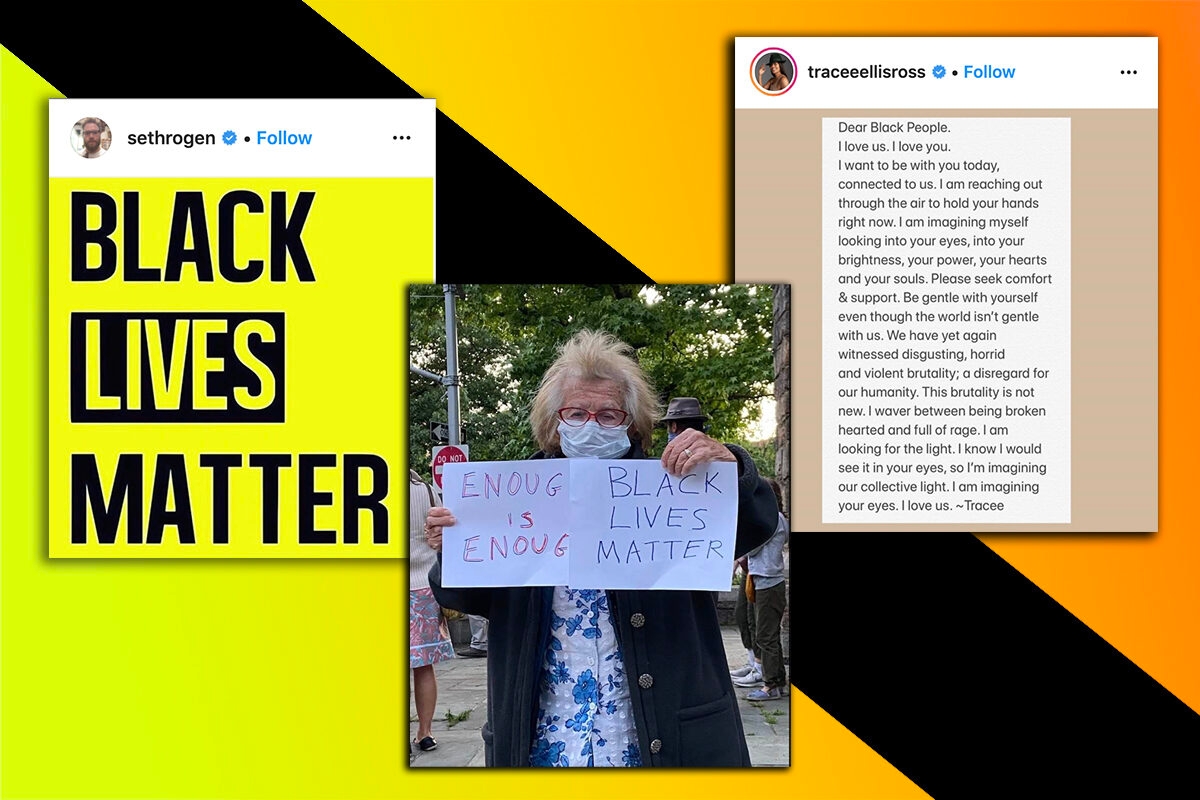 At a time when so many in our nation have to take to the streets to protest police brutality against Black bodies — brought on by the recent murders of George Floyd, Ahmaud Arbery, and Breonna Taylor — our focus should be on amplifying Black voices.

So, yes, at first glance, it may seem a bit weird to elevate those who already have a huge platform — namely, celebrities. But in a moment when we consider what allyship is, and what all of us (yes, you too, reader!) can do to make this country a safer and better place for Black Americans, it’s worth examining what celebrities — Jewish and otherwise — are doing.

When it comes to white-presenting Jewish celebrities, are they doing enough to help right now? Are they calling out racism where they see it? And will they keep doing the sustained work of anti-racism and fighting anti-Black bias in their homes and beyond? We don’t know the answer to that yet. For all of us, marching and protesting and posting Instagram memes is not enough — we have to keep working beyond this day, this week, this month.

But it’s still important to look at how some are using their platform — and their Jewish heritage — to inform and activate their followers. And of course, there are Black and Jewish celebrities, living at the intersection of it all, whose voice and lived experience, we should elevate first:

A son of a Jewish mother, Noah, who was raised “sometimes Jewish,” managed to explain structural American racism in this deeply moving video. Noah’s speech was a thoughtful examination of the reality in American for Black people, and he also dismantled any arguments against the protests and the looting in the street.

“There is no right way to protest because that is what protesting is — it can not be right because you are protesting the thing that is stopping you,” Noah explains.

And to those decrying the looting, he reminds us that the real looting is “looting black bodies.”

The beautiful and radiant Tracee Ellis Ross posted many messages on her social media, including this beautiful, personal letter to Black people in America. “Please seek comfort & support. Be gentle with yourself even though the world is not gentle with us,” Ross wrote. “We have yet again witnessed disgusting, horrid and violent brutality; a disregard for our humanity.”

At this moment of grief for so many Black people in this country, having Ross’ words of comfort and strength is a gift.

In her Instagram stories, she shared a great post reminding us that we need to talk to our kids about racism.

“Education is the most powerful weapon which you can use to change the world.” – Nelson Mandela I am reminded that all great change in history has come with unrest, anger and fight and it’s time for a change, so let this be the catalyst. I also think about what can I do other then virtually protest and donate money. I know my greatest tool is starting with our children. Conversations about race and racism can be uncomfortable for parents and children but they are important and necessary in the world we live in. Let’s give children the knowledge and tools to make change in history. Books are a great way to start. I encourage you have these critical conversations early and often, to not only buy books with diverse characters, but also ones that address race, racism, resistance and activism. @theconsciouskid is a great resource. Also check out @embracerace and share below any other resources you find helpful! #booksandcookies Posted @withregram • @secretsocietyofbooks “To counter racist socialization and racial bias, experts recommend acknowledging and naming race and racism with children as early and as often as possible. Children’s books are one of the most practical tools for initiating these critical conversations, and can also be used to model what it means to resist and dismantle oppression.” @theconsciouskid has put together a list of 41 children’s books to support conversations on race, racism and resistance. They are a Black and Brown owned educational and parenting site, their work is vital. The list is offered through their Patreon page. Quote by @joknowlesauthor

The Jewish mom has been sharing her disgust at the arrest of CNN reporter Omar Jimenez: “Sitting in a doctors office balling my eyes out watching this. Searching for hope but it feels very far away right now. My God help us all. This is what happens when our gutless leaders enable this type of behavior. Fucking VOTE!!!”

Hearing the MULTIPLE sirens outside my window here in Los Angeles is giving me massive ptsd. I can’t help but wonder who is being taken away in those cars, lives changed forever. Stay strong out there y’all. Stay safe. #BlackLivesMatter #vote

The High Fidelity star posted her rage about George Floyd’s murder, writing: “that man is a murderer. and are the copS that just stood there and chewed gum while THEY watched him do it.”

that man is a murderer. and are the copS that just stood there and chewed gum while THEY watched him do it. #georgefloyd #blacklivesmatter

And then he really went to town: Rogen also called out anyone who responded to his Black Lives Matter post with “all lives matter” with some choice expletives. He even told one to “stop watching my movies.” Respect!

seth rogen explaining it in the simplest way possible pic.twitter.com/UQ24CA1eZf

The Frozen actor has been sharing a lot of social media about the civil unrest in the country, urging people to be allies to Black Americans, and encouraging people to vote (which is super important, but unfortunately will not solve systemic racism in this country). When fans called him out for being too political in the moment, he had an amazing Jewish response:

“A lot of my “so called fans” are asking why I don’t just shut up and make you laugh. My Grandparents were Jews. For THAT they were sent to Camps & forced to see their families murdered. If you have a voice & you remain silent, you are a part of the problem. Not the solution,” the Jewish dad wrote.

Pink reposted a post by Billie Eilish’s call against “all lives matter” rhetoric and forcefully responded to commenters who came out against her. She wrote to one: “You are the epitome of white privilege and the saddest part is that you don’t hear yourself and probably never will.”

She has been sharing a lot of posts encouraging people to donate and vote, filling her social media feeds with signs of solidarity.

The Jewish fashion designer posted pictures of his own LA store defaced with the names of George Floyd and Sandra Bland, writing “A life cannot be replaced. Black Lives Matter.” At a moment when people are condemning looting, it’s nice to have a Jewish store owner condoning it — or at least, reminding us that his stores can be replaced, and that Black lives can not.

Jewish model Emily Ratajkowski protested in LA. On social media, she has not been silent for a moment, calling for the demilitarization of police, and reminding us that dismantling racism goes beyond voting this November — and that a new president will not solve the systemic and age-old problem our country has been facing.

The Jewish model and Transparent actress marched in Boston. After marching, she reminded her followers to follow the lead of Black organizers: “Tonight at the Boston protest I located black organizers at every turn and deferred to their leadership: chants, directions, conduct,” she tweeted. “When the police showed up it was belligerent whites who were first to get confrontational and escalate despite reprimand from the organizers.”

“white allies: show up, listen, then act. read the room. it is our imperative to fight for our black siblings but only ever on their terms. don’t be fucking dumb,” she added, not mincing words.

And then, of course, there’s amazing Dr. Ruth, who is turning 92 this week, and still stepped out in the middle of a pandemic, with signs saying “Enough Is Enough” and “Black Lives Matter” to attend a vigil in Riverdale in the Bronx. Right on, Dr. Ruth!