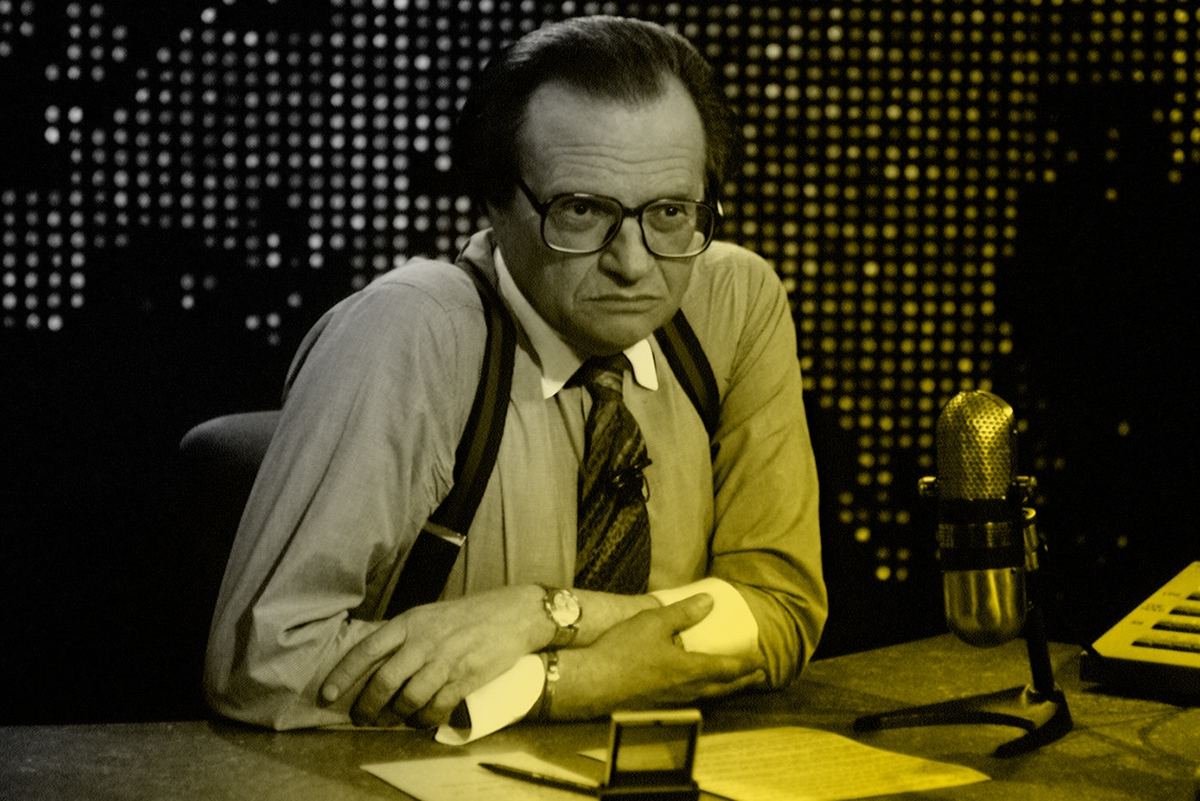 Larry King died this past weekend at age 87, after he was hospitalized with Covid-19 earlier this month. The talk show host with his iconic suspenders was an unforgettable presence in our lives —  whether you grew up listening to him on the radio, or watching him on CNN, or you recently enjoyed the “Larry, I’m on DuckTales” memes (no seriously, they are a delight, watch them now).

King, who was born Lawrence Zeiger in the Bronx, the “son of Eddie and Jennie from Minsk and Pinsk in Belorussia,” was known for his chutzpah, unabashedness, and direct questioning. He was never shy about letting people know he was Jewish, despite having changed his name early in his career as a disc jockey because a producer said it was too “ethnic” — code for Jewish, of course. (He got King from an ad for a wholesale liquor store in Miami.)

King’s relationship with Judaism — and the way it intersected with his experience of fatherhood — is complex. King grew up Orthodox but was an avowed atheist. His last wife (King was married seven times, twice to the same woman), Shawn, is a devout Mormon, and their two sons, Chance and Cannon, also adhere to that religion.

Yet in so many ways, King was a loving Jewish dad. And, like so many Jewish dads, he was supportive and present. He was always happy to bring his kids to work, and despite what would be appear to be a recipe for a chaotic family life, King managed to keep what is by all appearances a healthy, loving, and constant relationship with his five children (two of whom tragically passed away in 2020).

While his father died when he was 9, King’s approach to parenting was probably influenced by his own Jewish mother: “She was the classic Jewish mother,” he wrote in 2005. “My Jewish name is Label, and so to her I was always Labela. I could do no wrong. Everything was for her children. That is Jewish to the core. I used to say that if I blew up a bank, killing 400 people, my mother would say, ‘Perhaps they made a mistake in his checking account.'”

He also spoke passionately about his own kids. “Children are a joy. Aw, the best,” he said in a 2011 interview. “Your life will never be the same. The minute they’re born — never the same.”

A photo on Cannon’s Instagram certainly tells that story: It’s a picture of all five kids flanking King’s sides and beaming. “Dad’s side of the family came out for Father’s Day weekend. We love this man!” the caption reads.

When Andy, King’s adoptive son from his marriage to Alene Akins, died in July of 2020, Cannon wrote on Instagram that his brother had “always been such a strong influence in being so lovingly optimistic. I have NO bad memories of Andy. Neither does my Dad. He embodied what it is to live life to the fullest and cherish every moment.”

Less than a month later, after King’s only daughter, Chaia, passed away from cancer, Shawn King fondly recalled this sweet memory: “Chaia loved the taste of Pepto Bismol and when she came to town, she and our boys would clink their spoons and have a sip right before bedtime.”

But it wasn’t just members of King’s family that saw the family as loving and supportive — King’s longtime’s listeners recalled how he loved to mention his children in his broadcast. Just recently, he thanked his son Chance for giving him the will to live after he suffered a devastating stroke. And after Chaia’s passing, many on Twitter recalled chance meetings with King when he was with his daughter, recounting how he beamed with pride whenever they were together.

And while he didn’t raise his children with Jewish traditions, it is very meaningful that he gave his only daughter a very Jewish name: Chaia. Especially since, in a recent interview with Ben Schwartz, he talked about how he would’ve kept his Jewish name if he had started his career today.

It’s clear that there were things in King’s Jewish upbringing that he deeply valued — in fact, he did consider himself culturally Jewish. He loved Yiddish and “the Jewish sense of humor. The shtick of the Jewish comedian burns in me.”

“I don’t believe in organized religion or religion, I can’t make that leap of faith,” is how Larry explained his atheism in a 2014 interview. “I lost my faith but not getting answers to questions… I lost my faith right around my bar mitzvah, I started asking the rabbi questions — because they encouraged me to ask questions.”

Of course, guided in part by his rabbi, King made a career out of asking questions. He also gave to Jewish causes throughout his life; he participated in Chabad Telethons; and he was never shy about having conversations about Judaism.

In 2015, Tracee Ellis Ross and King talked about her “Jewish self,” including how she adopts a Jewish New York accent when she’s around her Jewish dad. Together, the two praised Jewish and Yiddish humor.

In 2018, Schwartz asked him to make up a Jewish superhero on the spot. “Sky Bloomberg,” King responded with the hero’s name, whose secret identity would be a rabbi. “‘Hallo there,'” that’s his big expression,” he added with a Yiddish accent, as Schwartz laughed heartily.

“Larry Zeiger is still in there — he is Larry King on the outside,” he told the Los Angeles Jewish Journal in 2003. “But every day I feel amazed.”