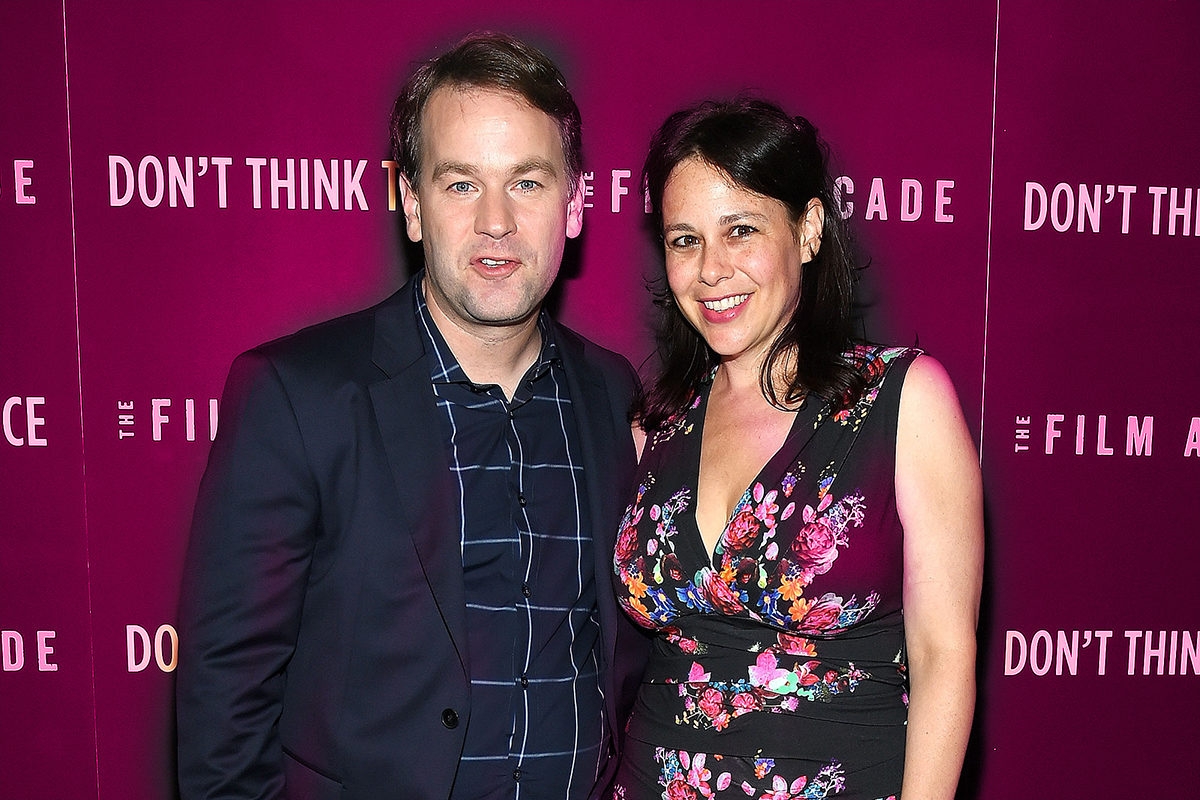 After we finished watching comedian Mike Birbiglia’s newest comedy special,The New One, about his reluctant journey to fatherhood, my husband and I both experienced a sort of catharsis. It was as if a bright ray of light shone upon our lonely, bleary-eyed, and toy-carpeted year-plus of early parenthood.

We felt seen, we laughed louder than we had in a long time — and yet, by the end of the show, our eyes were brimming with tears.

Birbiglia’s comedy is often poetic — he does not shy away from what some might consider to be platitudes, getting at some marvelous truisms with humor and candor. But this comedy special is literally poetic — because it incorporates three poems written by Birbiglia’s Jewish wife, Jen Stein, who goes by the pen name J. Hope Stein.

One such stunning poem is called “Little Astronaut.” It reads:

“A newborn rests her head on the earth of mother

and everything else is outer space.”

How wonderful — and wonderfully simple — is that?

From Stein’s words, it’s pretty clear that she loves being a mother. Birbiglia, on the other hand, establishes from the get-go that he was a reluctant partner in this endeavor: The Orange Is the New Black actor is a cancer survivor, and he has a sleep walking disorder that could be potentially deadly to newborn. He also quite simply didn’t want to have kids.

But, as it happens, Stein wore him down — with some help from his (presumably Jewish) urologist, Dr. Kaplan, who told him: “No man wants to have kids… Our wives want us to, we all go along with it. It’s the best thing that will ever happen to you… It is the most joy you will ever experience.”

Overall, the comedy special is excellent, and a must-watch for moms and dads. Aside from the poems, some of the funniest moments happen when the stage is flooded by toys and baby items, which Birbiglia picks up and rightfully derides.

“This is an actual magical sleep suit because you’re so desperate for your child to sleep you’ll actually believe in magic,” he tells the crowd. (Yep!)

“There’s a Moses basket in case you want to ship your baby down a river,” he yells.

He also aptly describes the lonely experience of fatherhood. After his daughter, Oona, was born in May of 2015, he says, “My wife, this person I love and cherish and know better than anyone, in front of my eyes becomes a mother and I… pretty much stay the same.”

“It’s almost like I didn’t know what ‘nothing’ meant until I became a dad,” he continues. “And then I was like, ‘Oh, that’s what nothing is.’ I was so nothing, I was the pudgy, milk-less vice president of the family […] My only job was to be around and have no opinions…. I was the intern of my own family.”

As The New One makes very clear, Stein is the president of this family. So, if you, like me, have watched this magical special and are intrigued by Birbiglia’s very obviously better half, here are some things to know about this amazing Jewish mom.

1.  As Birbiglia once told Ophira Eisenberg: Stein is Jewish, he is Catholic, and “together we’re nothing.”

So lucky to have found my wife Jen. So glad I’ve given up on the idea of being right.#HappyValentinesDayhttps://t.co/pzG8TrLJAi pic.twitter.com/2UqL3gPEXs

3. Until recently, she kept her poetry a secret from the world. As she tells Brenda O’Meara in this podcast, aside from Birbiglia and some poet friends, she didn’t tell anyone what name she was writing under or when anything she wrote was published. She wanted to “keep it to herself and not burden anyone with it.”

“I just felt like I needed space, I created a lot of space for myself. I would just hide my manuscripts around the house. I would just make sure everything is always hidden.”

4. She’s written five chapbooks of poetry: Talking Doll, Mary, Corner Office, Occasionally, I Remove Your Brain Through Your Nose and of course, Little Astronaut, which has a lot of poems about breastfeeding and motherhood (and where the three poems from The New One are published).

5. She started writing poems after her boyfriend died: ” I wrote a lot of short poems which were overwhelmed with grief and regret and guilt and self-loathing.”

6. Lena Dunham and John Mulaney are big fans of her work. Dunham called one of her chapbooks “a perfect book of poems for the contemplative weirdo,” and Mulaney wrote about Little Astronaut: “I read this collection, choked-up, laughing, and in awe.”

7. Her parents divorced when she was 2. Her mother became a successful music publisher who represented the lyrics of everyone from U2 and REM to Rodgers & Hammerstein, Irving Berlin, and Leiber & Stoller. She is now a retired full-time bubbe!

8. Stein wrote a book loosely inspired Thomas Edison called The Inventor’s Last Breath, and made a short film based on it.

9.  Stein used to have an office job. “I gave my heart and soul to my office job for like 10 years,” she tells O’Meara.

10. While Birbiglia was pushed into a lot of things by his wife, he was the one who pushed her to focus solely on her writing.

11. Stein is working on a book about an island of plastic, where there’s no food and everyone has to nurse to survive. It was, as you might have imagined, inspired by Oona, who barely stoped nursing in her first year: “She was just like a vampire feeder and she wanted to feed all the time, and so I wrote that when I was delirious and locked up all of the time.”

12. If you think having two immensely creative people in one household causes any friction, well, you’d be wrong in the case of Birbiglia and Stein. “We’re just in constant dialogue about everything we’re both working on,” she says, “I can’t find a downside to it […] He’s so available intellectually and emotionally in terms of people talking through their work.” Sweet!

13. Stein gets her work done around her daughter’s schedule. “I get up early with Oona and take her to school. Then, from there, I just go and do a first writing session. If all goes well, by 10 AM I have something.”  If she’s lucky, she adds, she can get things done before 3 when she picks Oona up from school.

15. She wrote a humorous blog of poems written by a fictional cat. As Stein says: “It’s e e cummings poems written from the perspective of a distinguished cat poet named e e cattings.” If that sounds delightful to you, know this: It is!