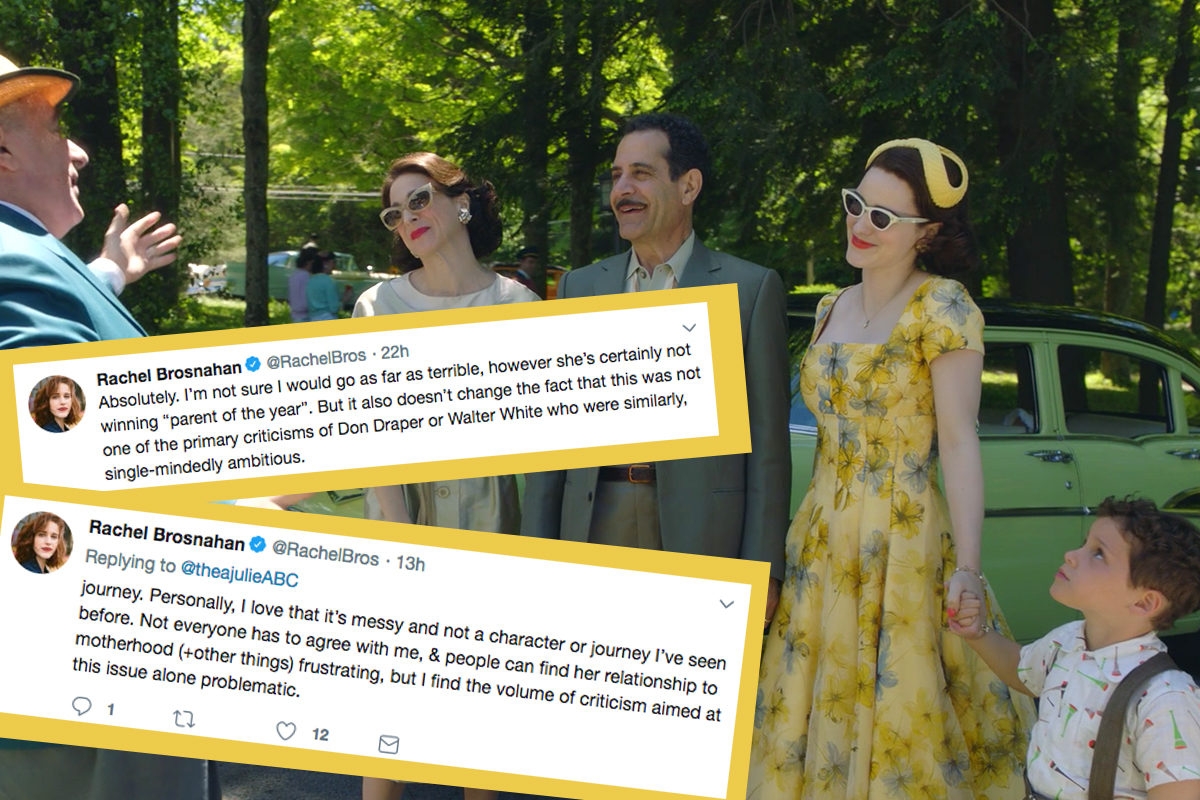 The Marvelous Mrs. Maisel is a lot of things. It’s a super Jewish show; it’s a show that unabashedly loves its heroine; it’s critically acclaimed and consistently sweeps awards shows.

But one thing Midge, the main character of Mrs. Maisel, isn’t: A present mom.

We’ve talked about Midge’s parenting before — Kveller contributor (and Call Your Mother co-host!) Jordana Horn wrote about how Mrs. Maisel may be marvelous, but she’s a terrible mom. This critique weaves throughout other reactions to the show; a Lilith essay headlined “Is Midge Maisel a Bad Mom? A Query” addresses the same questions.

The show’s stars, however, have never addressed the question of her parenting. Until now.

On Twitter, a visitor responded to someone sharing they just finished season two with the question: “Entertaining show. However, I am in the middle of season 2 and I am wondering what the point was in the writers deciding Midge should have two kids.” She continues in a second tweet, “You saw them for 2 seconds when they arrived at the Catskills and that’s it. They’re an afterthought. She has no interest in being a parent so why have her be one? It makes her less likeable. Would have been more interesting to have them later.”

For some reason, this caught the attention of Alex Borstein, the IRL Jewish mom who plays comedy club manager Susie.

Being likeable is for tweets. Women are complex creatures. We got a lot to do in a short amount of time on Earth. Now go write your book.🎈 https://t.co/V0QJInzTJd

The iscussion continued on the original tweet, with another person saying, “I GET what the show/writer’s/etc. are trying to convey BUT it doesn’t change the fact that as a viewer we can’t sit and say to the tv ‘love her, but she’s a terrible mom!!'”

And then, none other than Midge herself — or, um, the actress who plays her, Rachel Brosnahan — chimed in:

Absolutely. I’m not sure I would go as far as terrible, however she’s certainly not winning “parent of the year”. But it also doesn’t change the fact that this was not one of the primary criticisms of Don Draper or Walter White who were similarly, single-mindedly ambitious. https://t.co/a1Q3GXCtyH

She compares Midge to Breaking Bad‘s Walter White, and Mad Men‘s Don Draper, arguing their status as a parent was never discussed.

When someone pointed out in her replies that Walt was actually a bad guy, Rachel had the perfect response:

Sure. It was also a drama and this is a comedy. Midge isn’t evil but she’s sometimes blinded by her own privilege and can be self involved when it comes to pursuit of her new dream.

According to Brosnahan, Midge is “blinded by her own privilege” and can be “self involved when it comes to pursuit of her new dream” — meaning, her stand-up career.

She also points out that Midge is “definitely” spending time with her children “off-camera” — and, quite simply, her “life as a mother is not the primary focus” of The Marvelous Mrs. Maisel.

She definitely is. But her life as a mother is not the primary focus of our story. https://t.co/aQ2wdvKGem

Even though the children can feel like “afterthoughts on the show,” Brosnahan wants to distinguish between calling her a bad parent and someone who has a support system that allows her to follow her dreams.

In a series of three tweets concluding (for now!) her thoughts on the matter, Brosnahan lays out her argument:

Yes, sometimes they are afterthoughts. And Midge is a privileged primary caregiver whose children have 4 grandparents, a father who wants to be a part of their lives, a maid, neighbors and countless other places to turn for childcare. She’s a woman who achieved every dream she

“Midge is a privileged primary caregiver whose children have 4 grandparents, a father who wants to be a part of their lives, a maid, neighbors and countless other places to turn for childcare. She’s a woman who achieved every dream she ever had and then it all falls apart. And then she gets a new dream, and it’s completely at odds with her former life.”

“This tension is something she frequently addresses in her sets and I expect she will continue to as it becomes more complicated. She’s deeply imperfect on this journey. Personally, I love that it’s messy and not a character or journey I’ve seen before. Not everyone has to agree with me, & people can find her relationship to motherhood (+other things) frustrating, but I find the volume of criticism aimed at this issue alone problematic.”

In other words, Brosnahan is saying that Midge is deeply imperfect, and that’s OK. And she is frustrated with how people are fixated on her parenting, when the show isn’t about Midge-as-a-mom, but Midge-as-a-woman.

For Midge, like so many moms, motherhood is part of her life — but it doesn’t have to define her life.