My Family’s Quarantine With Shel Silverstein

Last week, when a colleague informed me that a houseboat once owned by writer Shel Silverstein — a seemingly dilapidated but super luxe two-bedroom number in Sausalito, California — was on the market, I was so excited you’d think I was just informed that New York City’s public schools were going to safely reopen.

Of all the unprecedented things that have happened this past month or so — oh, you know, global pandemic, government mandated lockdowns, the president using Twitter to foment civil war, and so on — one of the most surprising things has been that Silverstein has become a recurring theme of my family’s quarantine. So, hearing a spot of incredible news about someone who died in 1999 felt like something akin to bashert.

This jaw-dropping property, on the market for $783,000, looks like something the genius author and illustrator would himself dream up, from the weather-worn wooden exterior, the stained-glass windows, and the bed suspended from the ceiling. Looking at the listing photos of this literal dreamboat — a refurbished World War II-era barge, where the author lived in the late ’60s through the mid ’70s — was the perfect antidote to another long day cooped up inside.

This isn’t because we are Silverstein megafans at my home. Although, to be clear, I absolutely am one: As a mom, a writer, and a human being with a pulse, I absolutely adore his work. (One huge exception: The Giving Tree. The tree gives and gives and gives… What does the boy-turned-man ever do for the tree? Nothing!) Having a lead role in a fourth-grade play based upon Where the Sidewalk Ends was one of the highlights of my childhood — I still know some of the poems by heart — and, as a parent, reading that same book (my very own copy from when I was a kid) to my children has brought sentimental tears to my eyes on several occasions.

The source of my family’s current obsession, however, has nothing to do with Silverstein’s enormous talent. Rather, we’ve got a running gag going over here about just how “creepy” the author is. 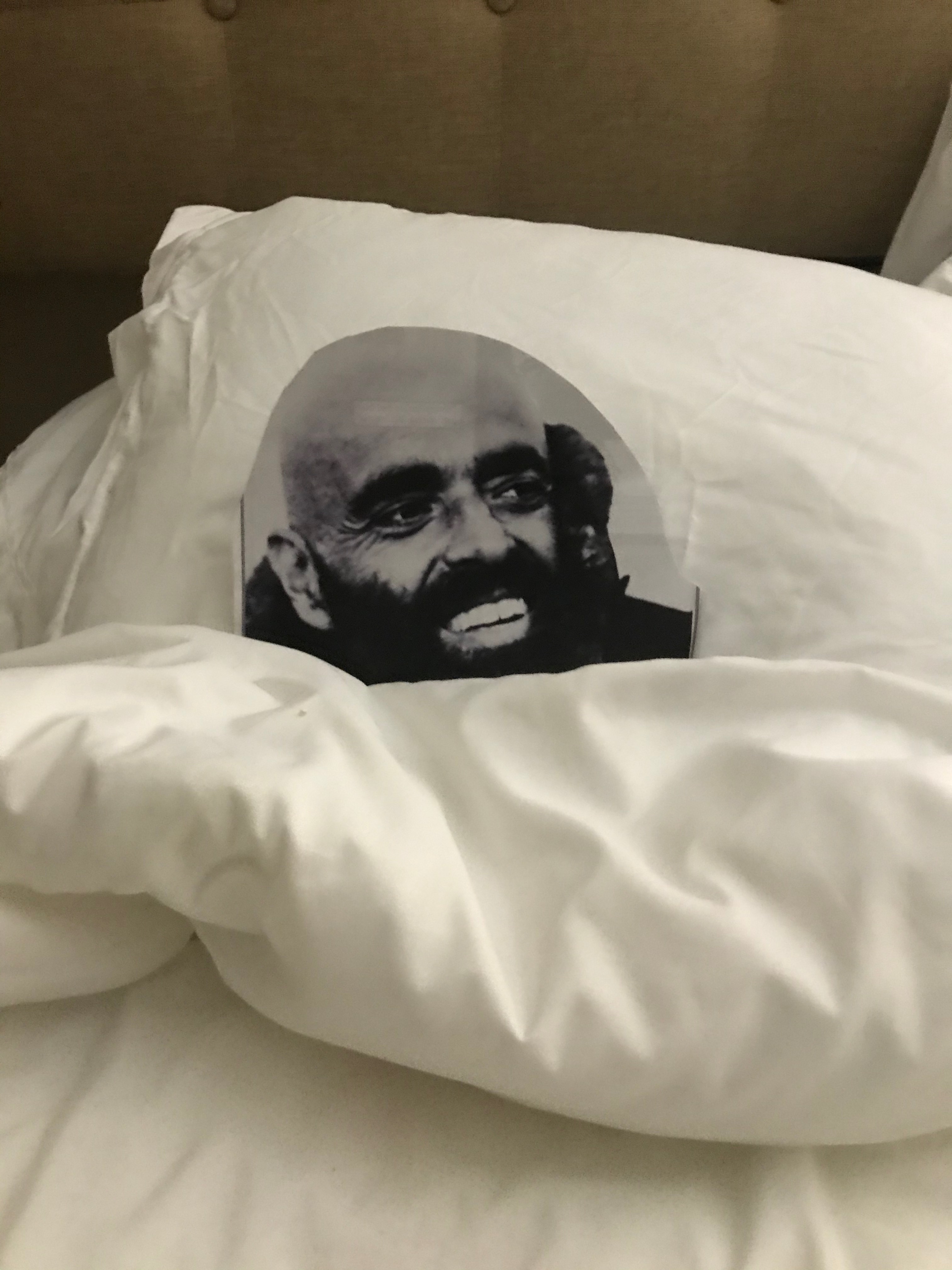 Shel Silverstein’s head is in my bed.

Now, to be clear, I know next to nothing about Silverstein and his personal life. I know he was born to a Jewish family in Chicago in 1932. He served in the military and didn’t start out writing children’s literature. As he famously told Publisher’s Weekly: ”When I was a kid — 12 to 14, around there — I would much rather have been a good baseball player or a hit with the girls. But I couldn’t play ball. I couldn’t dance. Luckily, the girls didn’t want me. Not much I could do about that. So I started to draw and to write. By the time I got to where I was attracting girls, I was already into work, and it was more important to me.”

He wrote a ton of illustrated travelogues for Playboy (which, I hasten to add, I think I’d love to see), was a regular at Hugh Hefner’s Playboy mansion, and was something of a playboy himself. He was also an incredibly prolific songwriter, penning several well-known songs, including “Cover of the Rolling Stone” and “A Boy Named Sue,” and a successful playwright, to boot.

But as a kid in the pre-internet era, I didn’t know any of this. All I knew was that the author photo on the rear cover of his 1981 poetry collection, A Light in the Attic, was enough to give me nightmares as a young girl. There’s something about that oversized portrait — the odd angle of the camera, the absurd amount of white space above his bald head, the super-white teeth contrasting with the dark, bushy facial hair — that truly scared the crap out of me. And apparently I’m not alone: The actor Kal Penn tweeted about this in 2014, and apparently Silverstein’s creep factor was a minor plot point in one of the Diary of a Wimpy Kid books. (“Shel Silverstein looks more like a burglar or a pirate than a guy who should be writing books for kids.”)

My family’s recent conversation about Silverstein, however, stemmed from watching Mo Willems’ “Lunch Doodles” livestreams (which I highly recommend). I find Willems, the author/illustrator of so many modern-day children’s classics, from Knuffle Bunny to the Elephant & Piggie series, to be incredibly charming, but my 10-year-old, probably not seeing past the shock of salt-and-pepper hair, declared him to be creepy.

This, in turn, lead us to a conversation about Silverstein and his Light in the Attic author photo, which, in turn, has evolved into something of a fun family obsession. We now possess a printout of that very same Silverstein headshot. Our initial plan was to create a stop-motion animation short about the photo — a brilliant third-day-of-quarantine idea that has most certainly not materialized amid the pileup of homeschool assignments. Instead, we have all had a bit of a laugh leaving said photo in all sorts of unexpected places: under the covers, tucked away in underwear drawers, taped upon the inside of a door. Every day is a new discovery!

As we’ve all been cooped inside adjusting to this strange new reality, secretly hiding Silverstein’s photo around the house has brought some much-needed joy in our lives. And since we don’t have a spare $800K or so to live in a boat that Silverstein once owned, quarantining with his photo has been the next best thing.