My Maternity Clothes 'Sparked Joy,' Until They Didn't – Kveller
Skip to Content Skip to Footer

My Maternity Clothes ‘Sparked Joy,’ Until They Didn’t 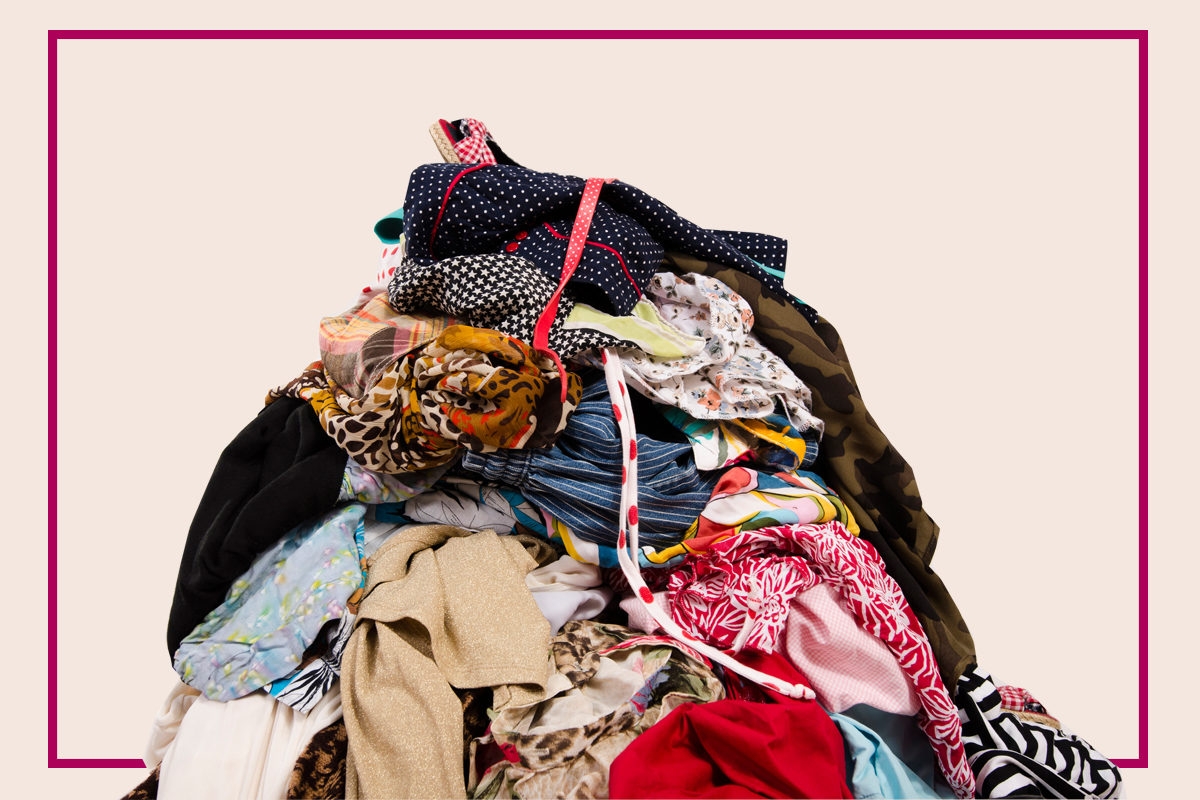 My maternity clothing hadn’t been touched since I last took them off of my body nearly six years ago. They’ve been stuffed inside a large black garbage bag, with holes and stretches from being thrown around from one closet to another, from one house to the next.

Until two months ago, that is, when I finally said goodbye. With delicate care, I removed each item, refolded it, and placed it in a new bag. I knotted the red ties in a bow, and scheduled a donation pickup.

It took me four years to get pregnant. My physical pain was profound, but my inner anguish was almost unbearable. For four years, my emotions soared with hope and sunk with reality.

When my third cycle of IVF was successful, I went shopping for maternity clothes. I remember very clearly how I felt, finally filled with a hope I could hold on to. Then, wearing them, I felt delight in my growing body. I loved that clothing. Not because they were stylish or pretty or made me look good. Not because they were a bargain or a gift from someone important. But because that clothing meant I had succeeded: I was pregnant, I was going to be — I am — a mother. That clothing sparked joy.

“My mission is to spark joy in the world through tidying,” explains Marie Kondo in her new Netflix show, Tidying Up with Marie Kondo. Kondo is the author of the bestselling book, The Life-Changing Magic of Tidying Up: The Japanese Art of Decluttering and Organizing. Her organizing techniques include holistically viewing all items in a category at once, as opposed to organizing space by space; implementing the use of boxes to organize smaller items; and a folding method that allows her clients to see everything in their drawers, so they always know what is there.

But organizing itself is just one aspect of Kondo’s KonMari Method, which attempts to focus people on what things in their lives spark joy, and what items they want to take with them into the future. Kondo teaches her clients to thank each item for its service before letting it go. Ultimately, the goal is to have an appreciation for the items we own, and to enable ourselves to live a more joyous life as a result.

I wore my maternity clothing throughout two pregnancies, and then my second son was born twelve weeks early, arriving in a massive gush of blood. We both nearly died. For years, I focused on recovering — first body, then mind — socking away the black garbage bag in a closet, for some time in the future.

With only a cursory mention of life’s not necessarily joyful necessities (i.e., batteries), the Netflix show spends most of its time scattered between the process of dividing items into “keep” and “discard” piles, and attempting to examine why it is difficult to let go in the first place. But the majority of the hard work remains behind the scenes, leaving the show mostly devoid of either practical advice or emotional resonance.

Episode 7, for example, centers around couple Clarissa and Mario, who are expecting a baby. Mario is a first-generation American who now owns a home on the same block as his parents. However, Mario faces a bit of an obstacle: His collection of 160 pairs of sneakers, for which he incurred $10,000 of credit card debt.

The show gives us little insight into his sneaker obsession. What did the shoes mean to him? Why did he need so many? Most importantly, how did Mario go from doing zero work to declutter in one scene, to full on purging in the next? For most people, this kind of major shift takes years of therapy.

It did for me.

My doctor says a third child would require $20,000 and a time machine to 2016, when my ovaries had a fighting chance of producing worthwhile eggs. But three years ago, I couldn’t have handled opening that black garbage bag. My mind wasn’t healed enough, and holding on to my maternity clothing was a representation of an impossible dream I refused to let go.

So, yes, I enjoy purging my home — but I also understand the emotional attachment to things. My emotional journey to pregnancy, to surviving labor, to motherhood, to finally letting go of my black garbage bag of maternity clothing was a deep, long, and powerful process. The ability to let go doesn’t just happen overnight, behind the scenes.

So we are left to speculate about Mario. If I spent $10,000 on sneakers, I might be reluctant to let go, because it’s difficult to come to terms with wasting so much money. But couldn’t Mario sell some of his expensive, unopened sneakers and use the money to purchase a baby crib and car seat for his son? Selling something from the past to help pay for the future could have been a powerful moment on the show. Instead, leaving out his emotional process — why the attachment to the sneakers, and how did he end up letting go  — was a missed opportunity. This absence was felt time and again throughout the season.

Also mostly absent are scenes of people donating their items. The show has many scenes highlighting the absurdity of excess. But passing our things on to others not only helps alleviate our own guilt in disposing of them, it also emphasizes the lessons Kondo is attempting to teach: Our items, which no longer spark joy for us, or have served their purpose, have the potential to spark joy for others.

Knowing my maternity clothing is going to people who could benefit from them was a huge motivator in saying goodbye. I have come to terms with the fact that there there is no third baby to come. I did not need my maternity clothes any longer; I could not use them if I wanted to. So I tied the red strings in a bow and felt proud to donate them. I hope they are sparking joy for someone else right now.