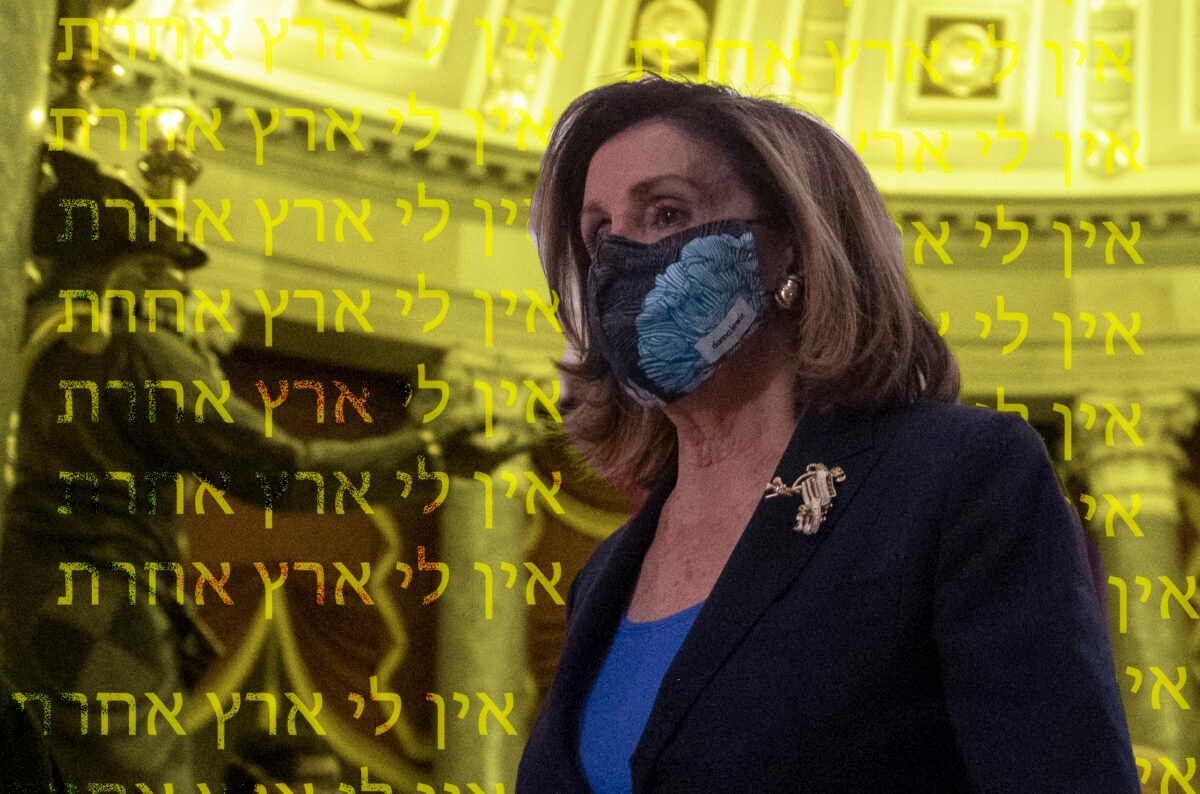 Today, on the floor of the House, Speaker Nancy Pelosi quoted the last lines of an incredibly powerful poem and song by Israeli writer Ehud Manor: “I can’t keep silent, in light of how my country has changed her face/ Won’t quit trying to remind her in her ears, I’ll sing my cries/Until she opens her eyes.”

“I can’t keep silent about how my country’s changed her face,” Pelosi continued, paraphrasing Manor’s words. “I urge my Republican colleagues to open their eyes and to finally open this president accountable. The security of our country and the future of our very democracy is at stake.”

.@SpeakerPelosi quotes an Israeli song, one that never fails to move me: Ein-li Eretz Aheret, I have No Other Country. https://t.co/BiNft97zqw

When I heard Pelosi’s words, a nostalgic chill ran down my spine. “Ein Li Eretz Acheret” — “I have no other country,” in Hebrew — is a song and poem that is forever etched in my soul. I’ve heard it from infancy, playing on the radio on somber days, in the aftermath of armed conflicts and terror attacks. I’ve sung along to it on school stages during Israeli Memorial Day ceremonies, wearing black, as my country mourned all those lost to war and suicide bombings. It’s a loss that so many Israelis have felt and that Manor, who died in 2005 at age 63, expressed indelibly in these words.

If you’re not familiar with Manor’s name, trust me when I tell you that you are familiar with his songs. He also wrote “Bashana Ha’Ba’a,“ one of the most beloved Israeli songs of all time, which is used to mark the Jewish New Year.

Both of these songs were written in response to wars, in tragic circumstances. Manor wrote “BaShana HaBa’a” in 1970, two years after the War of Attrition, a murky and harrowing battle in the Sinai Peninsula that cost the lives of many Israeli soldiers — including Manor’s own brother. “Ein Li Eretz Acheret” was written after the First Lebanon War as a critique of the Israeli government’s treatment of soldiers during that 1982 conflict, and also as a late response to latent feelings Manor had about his own brother’s passing. “For many years, I’ve been walking with a feeling of very strong protest, that there was a disregard for human life,” he said about the song.

While “Ba’Shana Ha’Ba’a” has a hopeful and nostalgic note to it (perhaps even more so due to the upbeat melody that Nurit Hirsh composed for it in 1970), “Ein Li Eretz Acheret” is all fire and flame — literally. “I have no other country/Even if my land is burning,” the song starts. “Just one word in Hebrew seeps into my veins, into my soul/ With an aching body, with a hungry heart, here is my home.”

The song’s melody was composed by Korin Allal, whose family arrived in Israel from Tunisia when she was 9. Allal is one of the best Israeli rock musicians of all time in this humble writer’s opinion (and was the producer behind the amazing ’90s Israeli rock band, The Witches). She’s also a prolific songwriter; she composed the melody to the poem in 1982 for former Eurovision winner Gali Atari, who recorded and released it in 1986.

There have been many gorgeous renderings of the song, including by Israeli pop star Ninet Tayeb and by Hasidic sensation Lipe Schmeltzer.  But my favorite rendition is by Allal herself, who lets every word reverberate in your heart as she sings it with her unique voice. Allal is known for songs that are both critical and loving towards the Jewish state, and those sensibilities are palpable in her rendition of this song.

From the moment it was released, “Ein Li Eretz Acheret” has truly become a sort of nationalist litmus test. Some, like pro-settlement supporters during the Israeli disengagement from Gaza, have focused on the song’s title and have interpreted it as a nationalist rallying cry. Others, like Pelosi, used it as a dire call for action, and as a way to criticize the nation they love and live in, beseeching it to “open her eyes.”

Whatever you make of the song, it is considered Manor’s most beloved song, and it’s hard to deny how powerful and moving it is. I can hardly think of a more poignant and beautiful song to quote on the floor of the Senate.