Our Jewish Family Is Separated by the U.S.-Canada Border and It's Heartbreaking – Kveller
Skip to Content Skip to Footer

Our Jewish Family Is Separated by the U.S.-Canada Border and It’s Heartbreaking 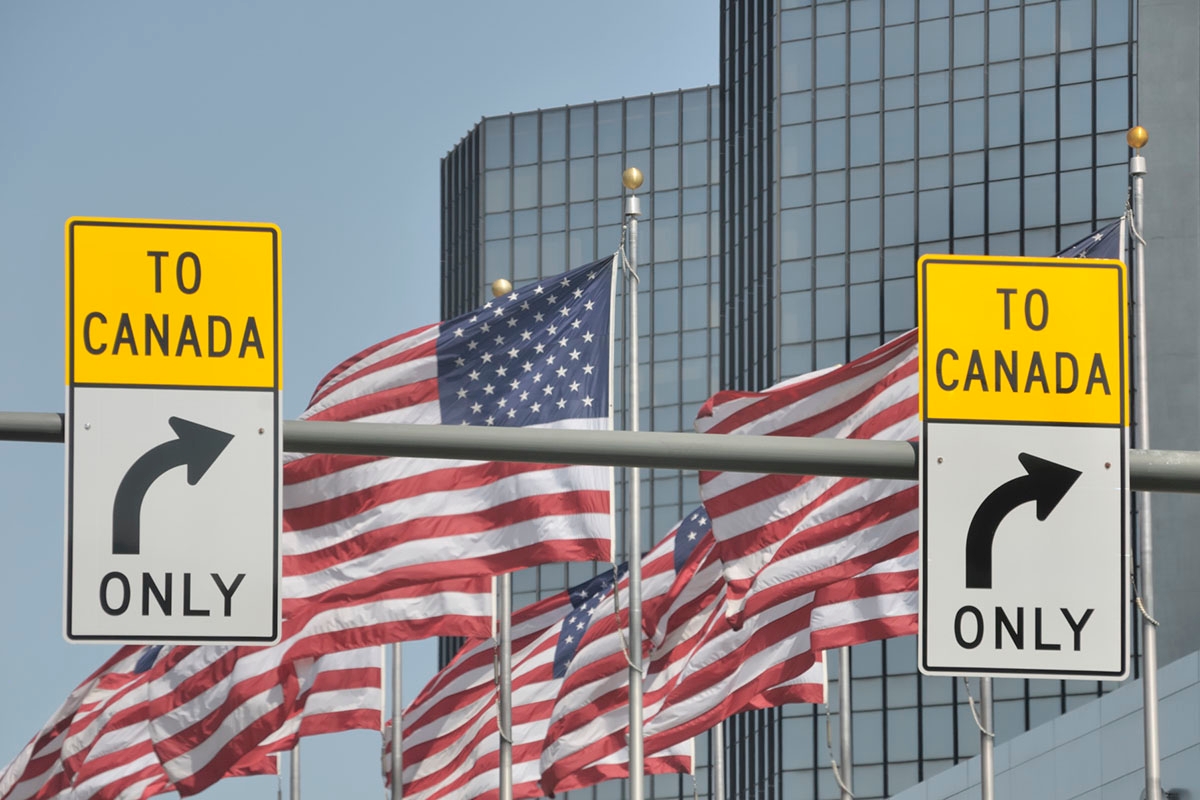 I stabbed the red button on my phone screen as tears stung the corners of my eyes.

We live in New Jersey while my parents live in Toronto. When the border separating the U.S. and Canada was shut down in March of 2020 in an effort to control non-essential travel between the two countries during the pandemic, my parents lost all hope of engaging with their grandchildren in any real or meaningful way. My kids were only 10 months and 2 years old at the time —  adorable, yes, but hardly great conversationalists.

Since the closure, my parents have seen Lyla go from crawling to toddling to, most recently, a mere blip on the screen as she runs by while I’m FaceTiming my parents. They have reconciled themselves to the fact that Miles is more interested in hanging up the phone then talking with them. They have accepted they cannot be part of the action. They have learned to be OK with watching them from the other side of the screen.

And yet, this situation is still hard for me to accept. For three generations, my family travelled freely across the border between the U.S. and Canada. In fact, the very origins of my existence can be traced to the historical ease of cross-border travel.

My dad’s parents were Eastern European Jews whose families had been compelled to leave Russia in the 1920s due to antisemitism. My dad’s father immigrated to Brooklyn with his family, while my grandmother’s family settled in Toronto. My grandparents met during World War II when my grandfather, an American soldier, was stationed near Edmonton, Alberta. (The areas surrounding Edmonton were home to a network of strategic weather bases.) My Grandma Seema was living in Edmonton with her aunt, trying to earn money, as her family could not afford to support all their children. After a brief stint in New York with my grandfather’s family, my grandparents set down roots in Edmonton.

About 3,000 kilometers east, my mom was raised in Windsor, Ontario, a small city directly across the border from Detroit. My mom’s father had been pushed through medical school in England during the war when they allowed Jewish students to enroll for the first time. Following the war, there was a lack of opportunities for Jewish doctors, forcing my grandparents to move to North America in search of a better life.

Living in Windsor was analogous to residing in one of Manhattan’s many bedroom communities across the tri-state area. But instead of having to pay a bridge or tunnel toll on your daily commute to Detroit, you would have to cross an international border.

Growing up, I’d often heard stories about how my grandfather used to cross the border to fill up his car with gas because it was cheaper in the U.S. In fact, much of my mother’s Jewish life took place across the border where there was a larger Jewish community. Years later, my cousins attended Hillel, a Jewish day school in Farmington Hills, Mich., returning to Windsor every night to sleep peacefully in their own Canadian beds.

Partly driven by this belief, I moved from Toronto to New York in 2009.

For the next decade, until I obtained my green card through marrying an American, I was sent to the “little room” in the airport at least four or five times. The “little room” is a holding area off to the side of the immigrations and customs queues where you are sent if your paperwork raises any red flags. While these experiences were hardly pleasant —  the most that happened was sometimes I would have to catch the next flight, as it often took the officers a while to get to me.  Even then, I could always catch the next one.

That was until the border closed last spring. It was the first time I’d ever considered there may not be a next flight.

Like everyone else, at first my family assumed the coronavirus-related closure would last a couple of weeks. We’d miss celebrating Passover together but we were hopeful we’d be reunited by Shavout.

But by the time Rosh Hashanah rolled around — and the U.S.- Canada border remained closed for general travel, with limited exemptions for Canadian citizens and their immediate families — we decided to take action. We embarked upon a 10-hour drive to visit my family in Toronto. At the border, we were required to demonstrate proof we were going to quarantine for 14 days in a separate location from my family. We also had to answer questions about how we would access groceries and other basic sustenance while in quarantine.

The trip went fairly smoothly until my 1-year-old decided to consume a pound of Goldfish crackers and threw up all over her car seat. We stopped in Buffalo to clean her up and my husband went into a convenience store/pizzeria where he was the only one wearing a mask. Following the pizza, my daughter became car sick again and again, all the way to Toronto. Then, when we finally arrived, we went straight to our short-term rental, where government officials called each of us (including requesting to speak to our toddlers) daily to ensure we were adhering strictly to the quarantine regulations.

Needless to say, this complicated ordeal made me yearn for the days of being sent to the “little room,” when it seemed the biggest hardship of travel was being afraid to ask the border officer where the bathroom was located.

Nowadays, pandemic-related travel restrictions have transformed a one-hour shuttle flight from Toronto to Newark into a crusade involving coordination of vaccination schedules, painfully long drives, government-imposed quarantines, and the mercy of individual border officers who have sole discretion as to whether or not to let us across.

The current restrictions have made the journey to and from Canada feel so cumbersome, it may as well be an ocean voyage — like the annual trips my grandparents used to take to visit family members they left behind in Europe. Although the physical roads and border crossings haven’t changed, the route between Canada and the U.S. seems to possess nothing in common with the quick jaunt my grandfather used to take to get gas.

Cross-border nationals are still awaiting details of a phased border reopening plan. Vaccinated Canadian citizens returning from the U.S. are exempt from the 14-day quarantine requirement beginning in July. But at the recent G7 summit, it was reported that Prime Minister Trudeau and President Biden were unable to think of a way forward for our two countries. Following this news, the ban on non-essential travel was extended until at least July 21. Until the U.S. and Canada manage to overcome this rift, my family — like so many others — hangs in the balance.

Meanwhile, my kids are continuing to grow. I am not sure they actually know my parents exist in real life anymore. Sometimes, I am worried they believe their grandparents are actually entertainers on (an admittedly boring) children’s television show.

It feels as if my whole family is now stuck in the “little room.” And even though Rosh Hashanah is the next major Jewish holiday on the calendar, I’m already thinking ahead to Passover 2022. Instead of saying, “Next year in Jerusalem,” I now say, “Next year in Toronto.”