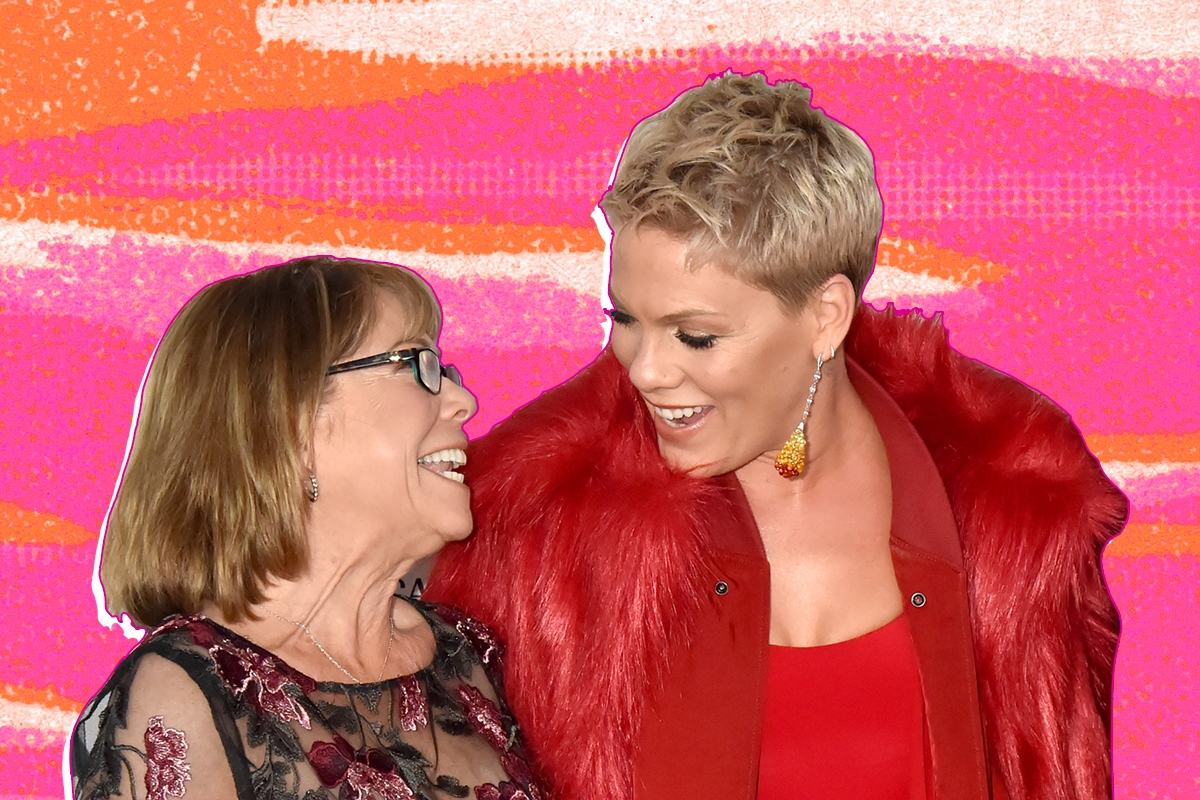 Jewish mama and musician Pink has been busy. After a whirlwind world tour in 2018 and 2019, followed by the pandemic and a harrowing personal experience with Covid  — in which both she and her son Jameson, 4, feared for their life — the singer is back with a new single.

The song is called “What I Know So Far” — but that’s just the beginning of the Pink news: she also has a documentary by the same name coming out on Amazon Prime on May 21. Let’s get the Pink party started!

The video of “What I Know So Far” is pretty out there, with gigantic leprechauns, floating eyeballs, and other over-the-top CGI visuals (and even a cameo from Cher for some reason? Personally, I always want more Cher in everything, so I’ll take it). Yet, it’s also deeply personal. In the video, Pink, 41, starts by telling her daughter (and musical collaborator!) Willow a bedtime story.

Like any typical 9-year-old, Willow has critiques and demands — “no fairytales!” and “no singing!” — but the tale Pink spins is decidedly not fantasy. Rather, it’s a facsimile of the story of her life, starting with her troubled childhood, in rhyme.

In flashbacks to her youth, the amazing Jewish actress Judith Light (“Transparent“) plays another Jewish Judith — Pink’s mom, Judith Moore (nee Kugel. And yes, you read that right: Kugel). Moore raised Pink (born Alecia Beth Moore) so after she divorced her dad. The video depicts Pink’s childhood rebellion — throwing fits and tantrums, trying to smoke, and basically being full of rage — which was especially aimed at her mom.

In interviews throughout the years, Pink has been candid about how the two didn’t get along when she was a kid. She lays that all bare in the video — including the moment that Moore kicked her out of their house when she was 15.

“[My mom] was trying to hold it together as a single mom, going to school full-time, working full-time, and raising two demons,” Pink told Redbook of that time. “I don’t think anyone ever tried to understand her, so how could she have the knowledge to understand me? And I was such a challenge to her. I pressed so many personal buttons.”

At the end of the video — after quite a psychedelic, technicolor adventure (which also features the singer’s hubby, Carey Hart, and their son) — Pink and Judith reconcile. This moment takes place in an apocalyptic-looking field, where Cher and a giant teddy bear make a gigantic, holographic appearance. And yet, the absurdity of the setting does not make the scene any less moving. That’s probably because Light knows how to bring emotional depth and poignancy to every onscreen microsecond (honestly, as a Jewish mom, I can’t think of a better tribute than to be played by the great Judith Light).

As I watched the two embrace and Light tear up, I literally started sobbing. (I am 9 months pregnant but that might just be an excuse). The moment is also juxtaposed with Pink leaving Willow’s bedroom and kissing her daughter’s sleeping head — the full circle of motherhood.

“‘All I Know So Far’ is that I don’t know much,” the singer reflected in a Mother’s Day Instagram post. “Being a mom is just a whole lot of prayers and a good bit of luck. There’s no manual for this thing we do. My mama always shows up. That’s the truth. She is relentless with her love, always striving to be better, constantly seeking joy and full of laughter. It’s been a lifetime of exploring what it means to be responsible for each other. Accountable to each other. Not perfect, ever. Just curious, and forgiving. I love this woman. With all of my heart.”

She posted the message with a slideshow of gorgeous, loving pictures of the two embracing throughout the years:

It’s clear that whatever strife and struggles these two have gone through, they’ve both worked extremely hard to fix their relationship and find pleasure and meaning in each other’s company. Pink often invites her mom to red carpet events — and they’ve even found ways to share and enjoy their Judaism together. Here’s Moore baking some delicious challah with her daughter, who captured this adorable candid shot:

In recent years, Pink has become more open about her Jewish identity. Back in 2017, she wrote about being Jewish and preforming in Berlin while neo-Nazis were marching in Charlottesville. She’s also spoken about taking her daughter to the Holocaust Memorial there.

As her own mother, Moore, Pink has described her as “that typical Jewish mother.”

“She called me the other day [imitates her mom’s voice]: ‘You’re playing the Wachovia Center! Why couldn’t you play the Spectrum? … She was like, ‘Honey, I came up with the best idea. I think you should sing “At Last” by Etta James.’ She starts singing the fuckin’ song to me on the phone… She’s trying to figure out my setlist, and I wish she’d just stop and bring me lox and bagels,” Pink recounted in an interview in 2009.

Aside from sharing Jewish traditions, the two also share a bit of a rebellious side, with Pink sending her mom bottles of gin as pandemic offerings, and texting with her about vaping cannabis. In an episode of “Jimmy Kimmel Live” from 2019, Pink shared the following text from Moore:

“So I survived my first dose,” the musician reads from her cellphone. “Should I take it twice daily? How long before I should see results or need to increase dose? Bring vape dose to Florida, spelled vap. From your stoner mom.”

We love how much these two seem to share, and the inspiring, ever-evolving mother-daughter bond they have.