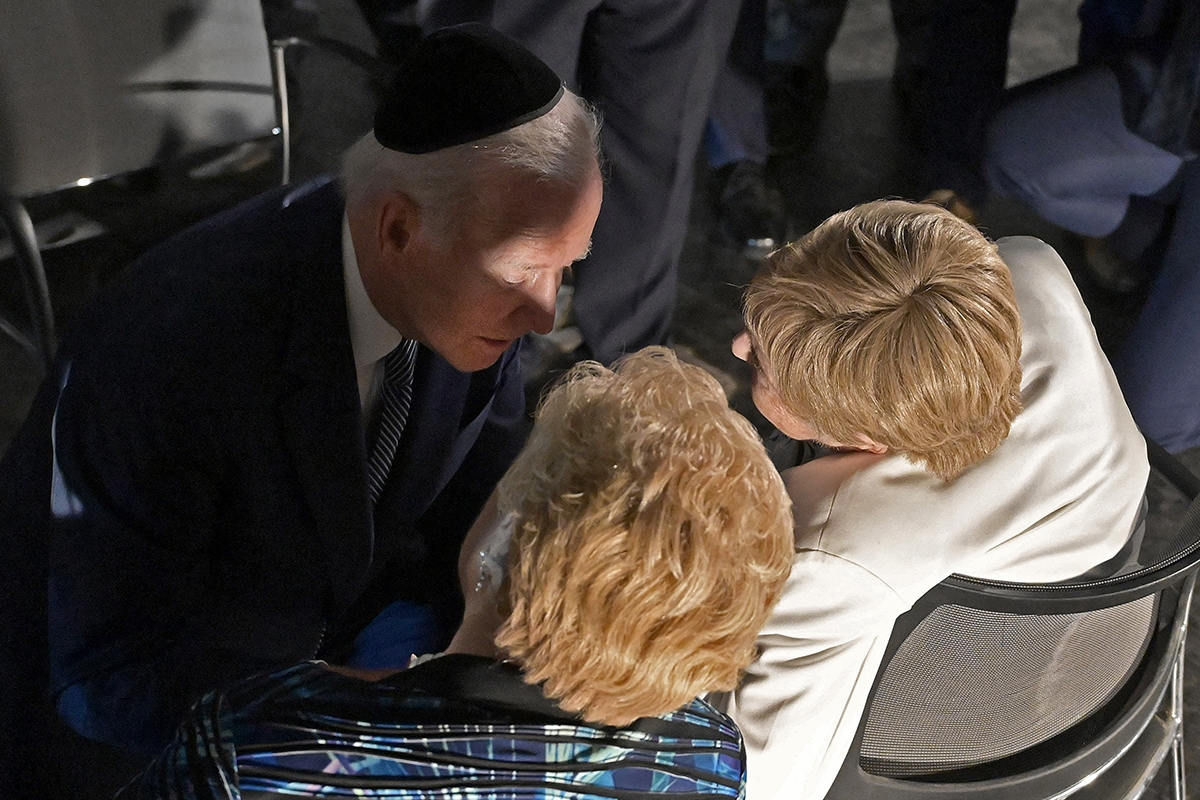 One of President Joe Biden‘s first stops on his presidential visit to Israel was Yad Vashem, Israel’s national Holocaust museum. There, the president donned a black kippah, laid down a wreath, attended a moving ceremony, re-lit the museum’s eternal flame and met with two incredible holocaust survivors — Rene Quint, 85, and Gitta “Giselle” Cycowicz, 95.

Quint, a Polish Jew, was orphaned during the Holocaust and survived by pretending to be a boy at a labor camp. Giselle, who is from what today is the modern state of Ukraine, is a survivor of the Auschwitz-Birkenau death camp.

Both survivors did not expect to have such a warm and intimate tete-a-tete with the American head of state, who has many Jewish family members — including three Jewish grandchildren.

“I’m very excited about the meeting and also a little scared of it,” Quint told JTA ahead of the short but meaningful meeting.

“At first they told us we couldn’t touch him or speak to him, but when he got here — he just kissed me. It was something and so much fun,” Quint later told Ynet.

“He was very cute, I wasn’t expecting it,” Cycowicz told the publication after their conversation. “He got on his knees and gave us a kiss. I told him how excited I am to be in Israel after living in the U.S. for 46 years… He was very emotional and very warm.”

Quint immigrated to the U.S. in 1946, settling in New York with her adoptive mother, also a Jewish Holocaust survivor — who died three years after they made it there. She was later adopted again by an American Jewish couple. For her, meeting Biden was “closing a circle.”

“When I arrived in the United States I was a scared little girl, I was 11,” she told JTA. “And now I’m meeting the world’s most important person.”

“We spoke about his first wife and daughter who died in a car crash. He knows what pain is and what our pain is,” the women shared. “He told me about the importance of Holocaust education and called us heroes,” Quint added.

Biden, of course, didn’t get away without giving the women one final compliment: “He told me I was young and beautiful. A very warm man, the president,” Quint kvelled.

“It is a great honor to be back — back to my emotional home,” Biden later wrote in the museum’s guestbook. “We must never, ever forget that it can happen again unless we remember, because hate is never defeated, it only hides… That is what I teach my children and grandchildren. Never forget.”