The Real Nazis Behind Amazon’s ‘Hunters’ 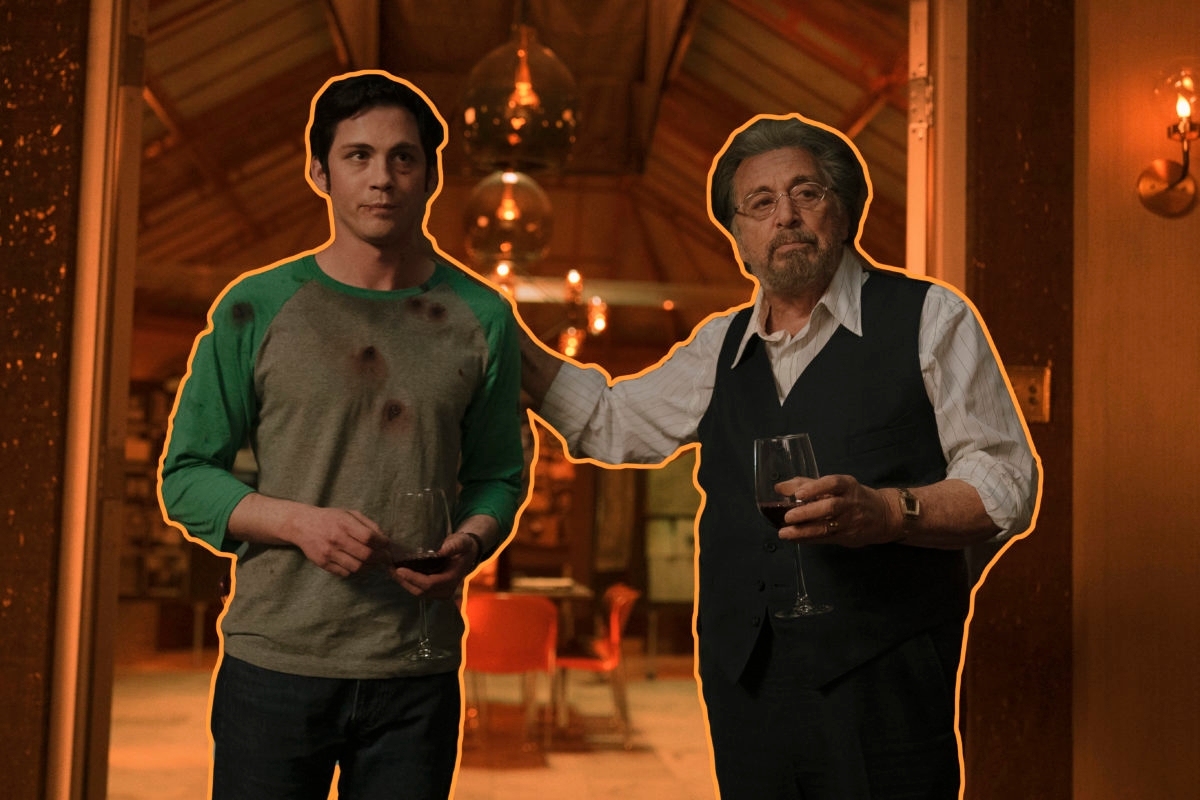 If you’ve watched Hunters, the Amazon Prime show starring Al Pacino and Logan Lerman as the Jewish members of a group of Nazi hunters living in 1977 New York, you may have been shaken by atrocities portrayed by the Nazis in the show.

It should be abundantly clear that not all the scenes of the show are historically accurate — Hunters is a very exaggerated and over-the-top fictional show. I mean, don’t let’s forget that the series takes place in an alternative universe in which Nazis are trying to start a Fourth Reich on American soil.

Still, the Auschwitz Memorial, among others, has criticized the show for fictionalizing the Holocaust — particularly that very hard-to-watch scene of a human chess match being played with Jewish prisoners  —  saying the invented scene “is not only dangerous foolishness & caricature,” it also empowers future deniers.

Despite its flaws, many people have enjoyed Hunters (myself included!). And I also believe that a great side effect of the series is that it’s unearthed some unknown or forgotten stories from the Holocaust that are well worth knowing. Many of these are featured in the show , but they’re interspersed with scandalous inventions from David Weil, the creator of Hunters.

So what’s real here and what’s total B.S.? We’ve already explored some of the Jewish things the show gets right and wrong, and I’ve written about the true story behind Hunters. Here, we’re going to delve into the stories of the real Nazis behind Hunters, which are fascinating and horrifying and truly worth knowing. So, let’s get to it.

Were there Nazi hunters in the 1970s?

Yes! Although unlike the all-star action team of Hunters, their work mostly involved tracking down Nazis to be tried and prosecuted. The most famous of these is Simon Wiesenthal, an Austrian Holocaust survivor who worked for the Mossad.

Were there Nazis in America in the 1970s?

Yes, absolutely. Some were even brought here by the U.S. government, either in exchange for working as scientists or as spies against the Soviet Union. Other Nazi collaborators simply lied in their visa applications to the U.S. about their Nazi affiliation, hoping to lead a normal life in the U.S. Many of them were caught and brought to justice, including Hermine Braunsteiner Ryan, known as “Majdanek Stomping Mare,” for kicking prisoners to death at the Nazi camp. Braunsteiner Ryan lived in Queens, not far away from where Hunters take place, until 1973, when she renounced her citizenship. She was tried and spent years in a German prison for the atrocities she committed.

Were there American Nazis?

Yes. Some Americans espoused Nazi ideology before, during, and after WWII. (Don’t forget about the American Nazi Party and the KKK, both of which are alive and well today.)

In 1977, the year in which Hunters takes place, Frank Collin, the leader of the Nationalist Socialist Party of America, famously announced a plan for neo-Nazis to march in the Chicago suburb of Skokie. At that time, one of every six people in the town was a Holocaust survivor. While the local government tried to do what they could to stop the march, they were sued by the ACLU (that’s right!), with the ADL providing a counter-argument. The march wound up being scheduled for 1978 but never materialized — the number of counter-protesters drowned out the few neo-Nazis who attended.

Are the Nazis in Hunters show real?

Well, not precisely, but some are based on real (and really horrible) people. Let’s take a look at some of the show’s Nazi characters, below.

Karl Holstedder aka “The Pied Piper of Buchenwald:” No, there was no Nazi officer at Buchenwald who held a cruel and deadly version of American Idol.

Gertrude Fischer, the Nazi scientist: This fictional scientist is based on the many German scientists the U.S. brought in to work for NASA in what was called “Operation Paperclip.” More on that in a bit.

Tilda Sauer, the propaganda artist: In an unforgettably gruesome scene, the hunters torture a woman called Karen Bollinger, whom they believe is Nazi propagandist Tilda Sauer. Sauer is possibly based on Leni Riefenstahl, the famed filmmaker who made Nazi propaganda, who achieved great acclaim for her 1934 propaganda film, Triumph of the Will. Riefenstahl was friends with Hitler, and during the war, she tried to make a movie based on his favorite opera, using extras from a Nazi concentration camp. She was arrested and then released after the war. 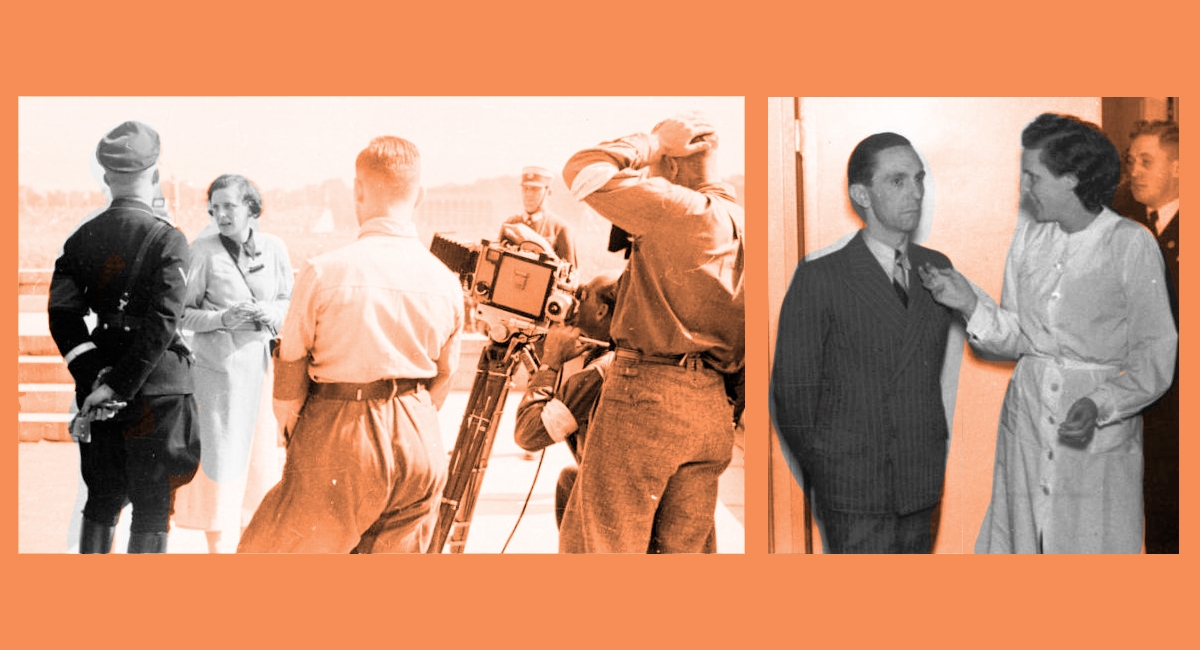 Oskar Hauptman aka Timothy Randall aka “The Ghost:” This character is a Nazi who supposedly died after the war, yet the hunters find him — frail and weak, his face completely altered by plastic surgery. Hauptman is possibly based on Josef Mengele, the German doctor who experimented on prisoners in Auschwitz and who was dubbed “The Angel of Death.” Mengele escaped to South America, where he died in 1985.

Moritz Ehrlich: This Nazi guard who killed (SPOILER!) the Markowitzs’ oldest child during the Holocaust is a fictional and extremely effective character.

Wilhelm Zuchs: A Nazi officer and plastic surgeon known as “The Wolf” is the number one target of the Hunters, who tortured Jonah’s grandmother, Ruth,  in Auschwitz. I will not spoil the important plot switch surrounding this character, but I will say this: While Wilhem Zuchs does not appear to be a real person, there was a Nazi nicknamed “the Wolf” who Wiesenthal tried to bring to justice. His name was Gustav Wagner, and Wiesenthal exposed his whereabouts in Brazil in 1978 but failed to have him extradited to West Germany for trial. The Wolf was known for his cruelty, like allegedly making Jewish prisoners eat bread on Yom Kippur, and brutally beating and killing prisoners in the Sobibor Nazi camp. 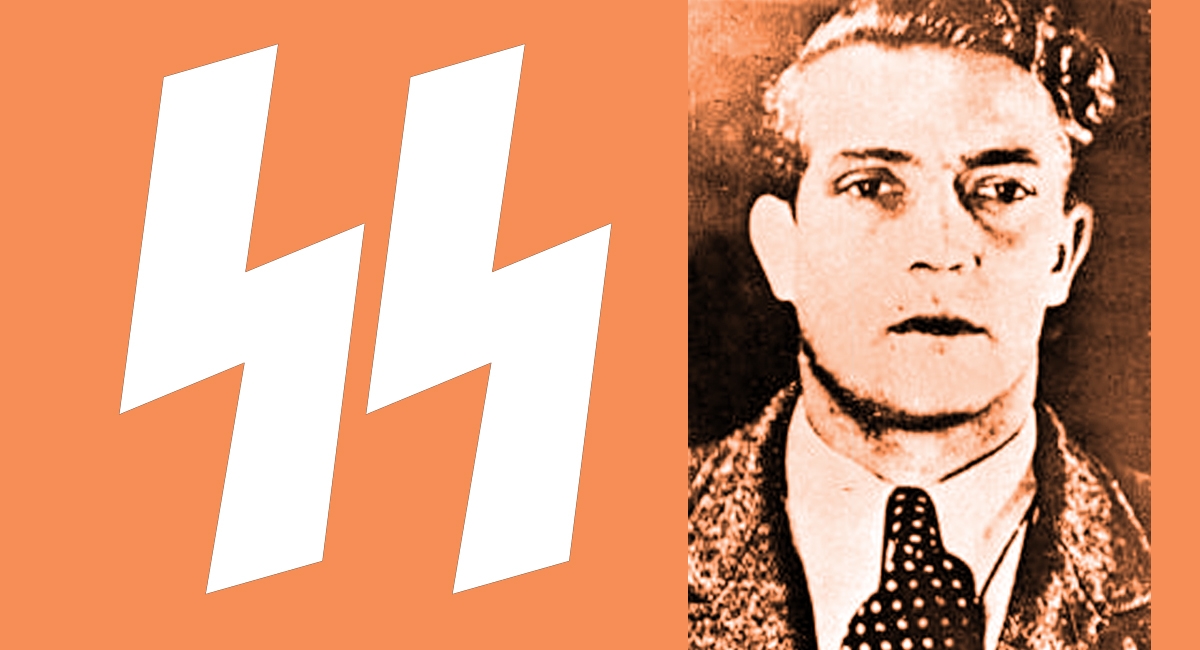 Werhner Von Braun aka “Rocket Man:” Yes, Werner Von Braun was in fact, a real Nazi scientist, and no, he wasn’t (SPOILER!!!!) killed by a group of Nazi vigilantes, as happens in Hunters.

Von Braun was a renowned scientist, who was brought to the U.S. on Operation Paperclip (yes, more on that soon!). He eventually became director of NASA’s Marshall Space Flight Center and the chief architect of the Saturn V launch vehicle, which helped American astronauts reach the moon. Von Braun was almost awarded a Presidential Medal of Freedom, but his Nazi past got in the way. 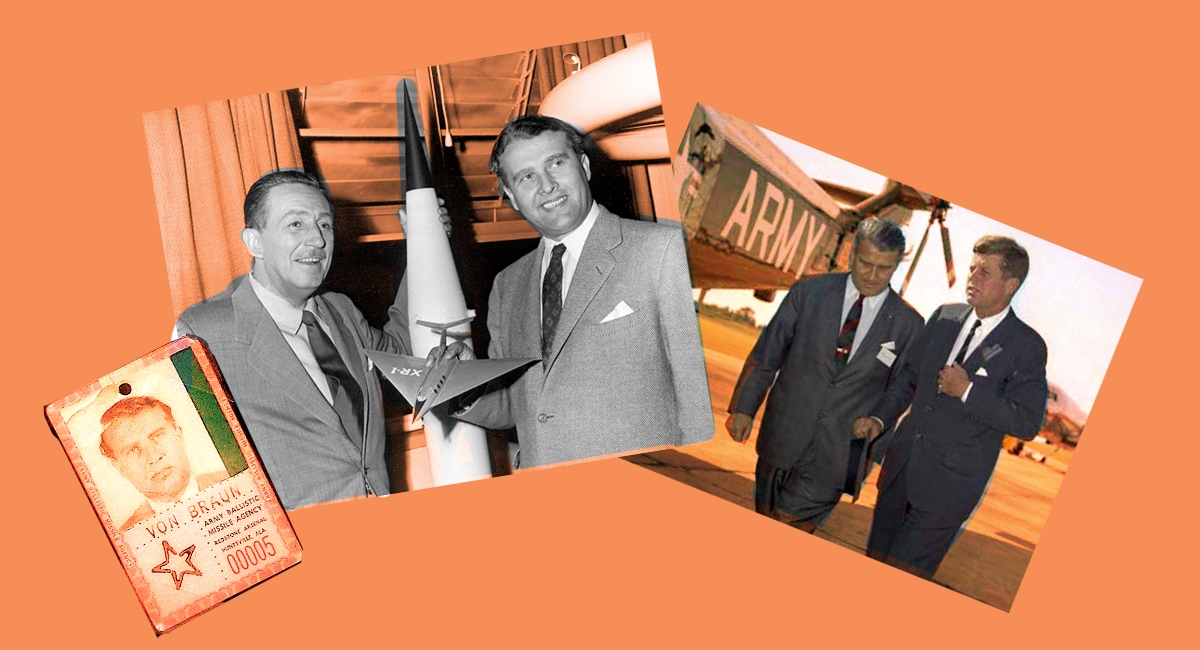 Among his accomplishments, von Braun engineered the V-2 rockets that rained on London during the last days of WWII. Another part of his resume that is glossed over: those who built the V-1 and V-2 rockets he designed were Nazi prisoners who worked in abject conditions. According to reports, the prisoners were not allowed to look at Von Braun while they conducted work for him — and those who did were hanged. 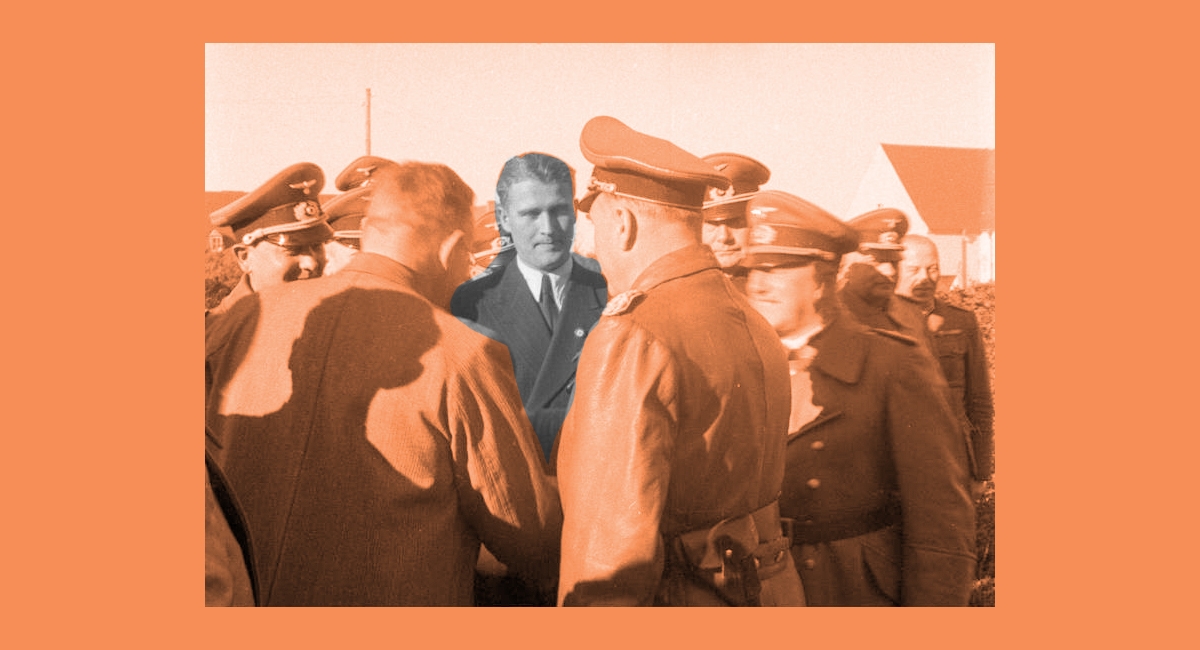 The Colonel: In Hunters, the Colonel is the leader of the group of Nazis who wants to start a Fourth Reich in America. She’s revealed to be (SPOILER!!!!) Eva Braun, Adolf Hitler’s wife. In this alternative reality, both Braun and the Fuhrer escaped to South America and had children together. In reality, Eva Braun was found dead in Hitler’s bunker in 1945. 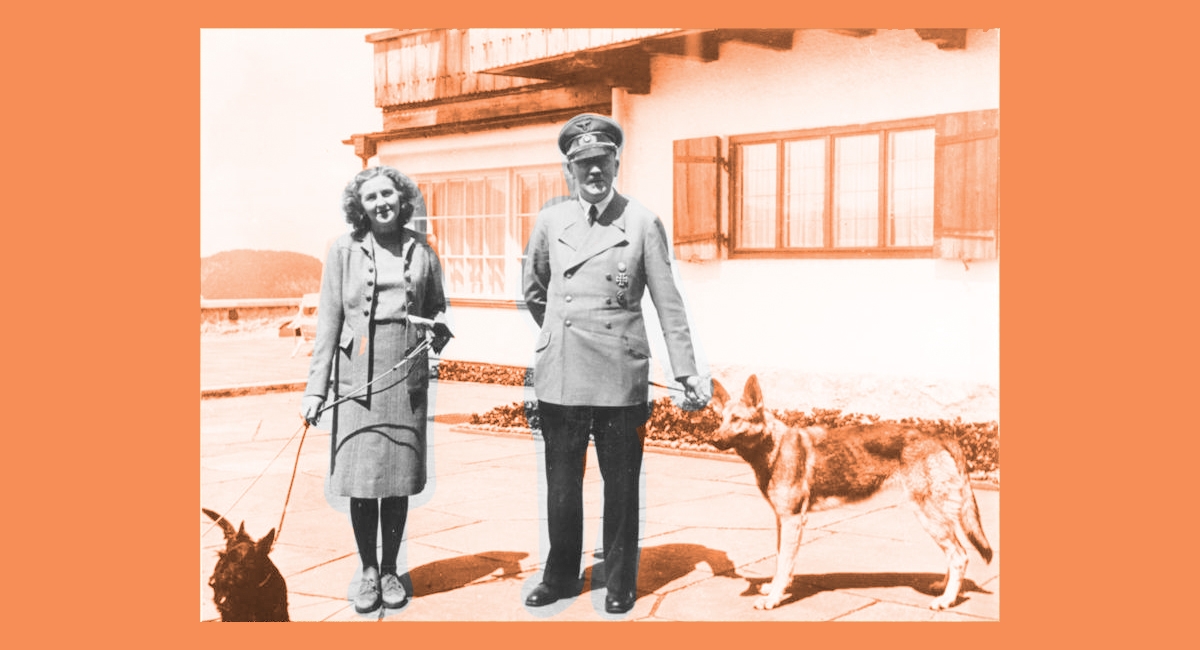 Did the American government really bring Nazi scientists to the U.S.?

Yes, as the show says in a ridiculous fake ad, the U.S. did invite in Nazi scientists through Operation Paperclip, which brought in around 1,600 scientists from across Germany, many of whom had worked for the Nazis. This covert operation helped the U.S. gain significant scientific advantages during the Cold War.