Returning to Mary Poppins, This Time With Stage 4 Cancer – Kveller
Skip to Content Skip to Footer

Returning to Mary Poppins, This Time With Stage 4 Cancer 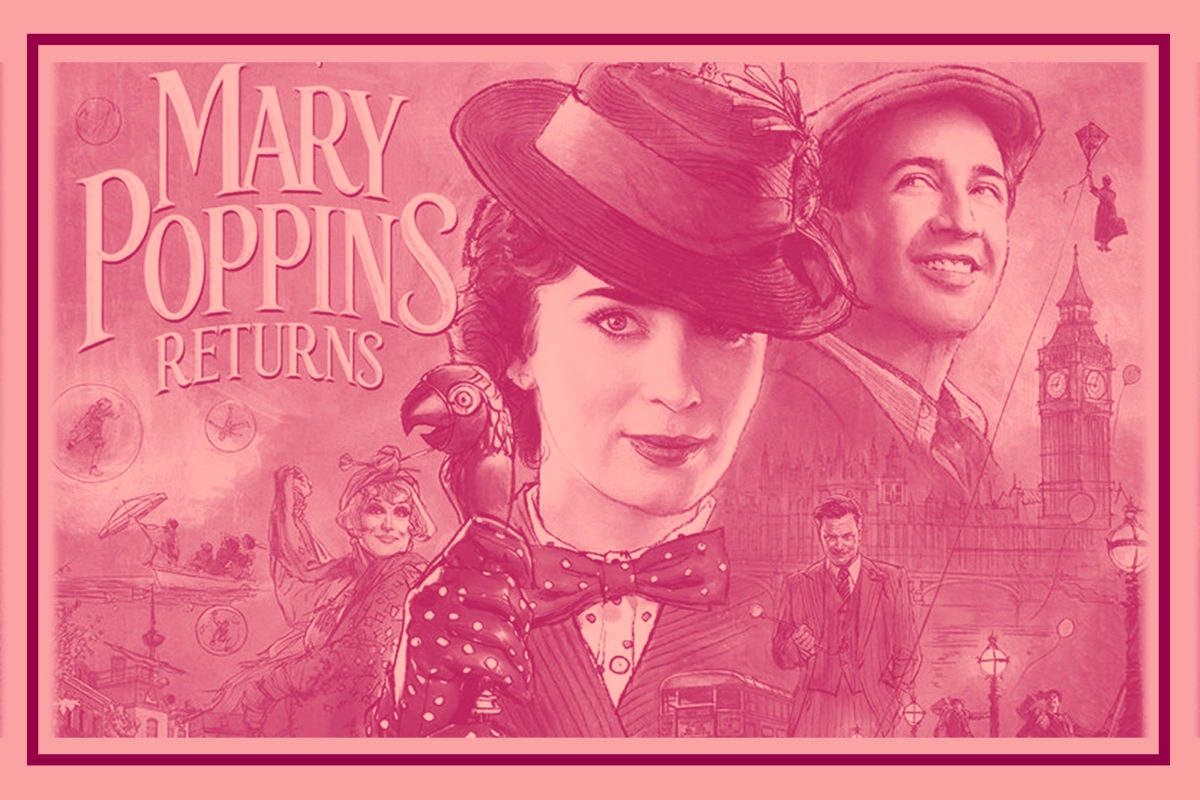 After a Christmas day screening of Mary Poppins Returns, my husband, 7-year-old daughter and I stood in the lobby of the movie theater, discussing the meaning of the film. “Fiscal responsibility,” said my practical spouse, impressed by how the magic of compound interest had saved 17 Cherry Tree Lane from the clutches of bank repossession.

But our daughter had quite a different take. “Hold your loved ones tight,” she said. Her favorite moment in the film? “When the father realizes the kids are right,” as they sing to him about their dead mother.

My child got straight to the heart of the matter: Disney films still do death well. In fact, they do it devastatingly. Watching Mary Poppins Returns a scant five days after my last round of chemotherapy for stage 4 cancer attuned me to the Banks tots’ bereavement. The sequel succeeds in ways the original did not, precisely because it dares to be dark. Mary Poppins Returns is not, in fact, escapism, colorful as it might be. It is reality couched in parable, and thus, it does what P.L. Travers, the author of the Poppins books, knew that all the best folklore does: it returns us to ourselves by taking a path into the woods (coincidentally, director Rob Marshall’s previous credits include the film adaptation of, well, Into the Woods).

Travers, a spiritual dabbler in many religious traditions, thought a great deal about death. In a 1977 essay, she described how, as a child, she and the other young people in her congregation were excused from the pastor’s sermon and would play in the church’s graveyard, becoming intimately acquainted with those long departed, while carefully skirting the more recent graves: those of the neighbors they once knew as living, which were “too close to the huge fact of death, not yet gone into the Dreaming.”

Some critics have bemoaned the darker nature of this film, in which Michael, now grown up, is a widower parenting three children while still mired in grief. But it is also this shadow that allows the film to shine, through its heartfelt honesty of feeling. I sat there in the theater, my family by my side, as this latest generation of Banks children admitted to missing their mother, and Mary Poppins sang them to sleep with the haunting ballad, “Where the Lost Things Go.”  She sings of starlight, dishes and spoons, and spring beneath the snow, but most of all, she sings of memory. “Maybe all you’re missing lives inside of you/So when you need her touch/And loving gaze/Gone but not forgotten/Is the perfect phrase.” I wept as the song concluded, “Find her in the place/Where the lost things go.”

Other critics have complained that the film’s songs are not sufficiently “memorable,” but I haven’t been able to get this one out of my head. Though my cancer is not (yet) terminal, I have approximately fifty-fifty odds of being cured, making a long life seem less certain than it once did. Sitting there with our popcorn and M&Ms momentarily cast aside, I wondered if my daughter would someday soon, too soon, be the one missing me, and if I would be remembered, and how. I wondered if the film was giving her strength for the inevitability of my demise, whether it is near or far, for, in one order or another, all parents and children must bid each other farewell.

Travers writes, too, of the paradox of living, which is that we are all always also dying. Cancer does not give me superpowers or some sort of special status. As a professor of religious studies, I was obsessed with existential questions long before my diagnosis. But it does bring me closer to this state that Travers describes, this notion that the recently dead “faced us with the unfaceable and forced us to live, if but for a moment, with the fearful contradiction — This will happen to me some day/No, no, I shall live forever.” Yet, between life and death, Travers finds a “reconciliation.” Perhaps those of us with scary diseases are just a shade closer to Travers’ argument that “to know oneself pregnant with one’s death… is to experience a surge of energy, life so much at its apogee, that one feels one has the strength to leave it.”

A different author popular with the younger set — Maurice Sendak — famously said he never lied to children. Neither does Mary Poppins. There are no fairy godmothers here, and no resurrections beyond the mechanisms of memory. The place where the lost things go is accessible to the children in dream time, but their mother remains dead, except in their hearts, and Mary Poppins will not pretend otherwise.

Lullabies are about liminality. Bedtime is never easy. On the day last spring that I was diagnosed with cancer— but before I had told my daughter about it— she picked the death-themed The Invisible String as one of her bedtime stories. Of course she did, a friend told me when I relayed this the next day, still shaken. Kids know all about darkness, and they face head on what grownups fear. As Stephen Sondheim told us long ago, “children will listen.”

In the lounge chairs of the AMC Broadway 84th Street, on Christmas day, my daughter was indeed listening, and carefully. It wasn’t until I came home and heard the film’s soundtrack that I realized her interpretation of the film’s message — “hold your loved ones tight”— came directly from hearing Jack (Lin-Manuel Miranda) sing the reprise of “Underneath the Lovely London Sky” as Mary Poppins flies away and the film closes. “So hold on tight to those you love, and maybe soon, from up above, you’ll be blessed, so keep on looking high.”

The song was obviously memorable for her, and she’s a discerning critic. If “Feed the Birds” was the soul of the original film, then “The Place Where the Lost Things Go” is the heart of this one. From the nadir of parental death to the buoyancy of balloons, Mary Poppins Returns is a Mary Poppins for our times: times of separations and trials, uncertainty, and yet, beneath those winter snows, abiding hope… and cherry blossoms.