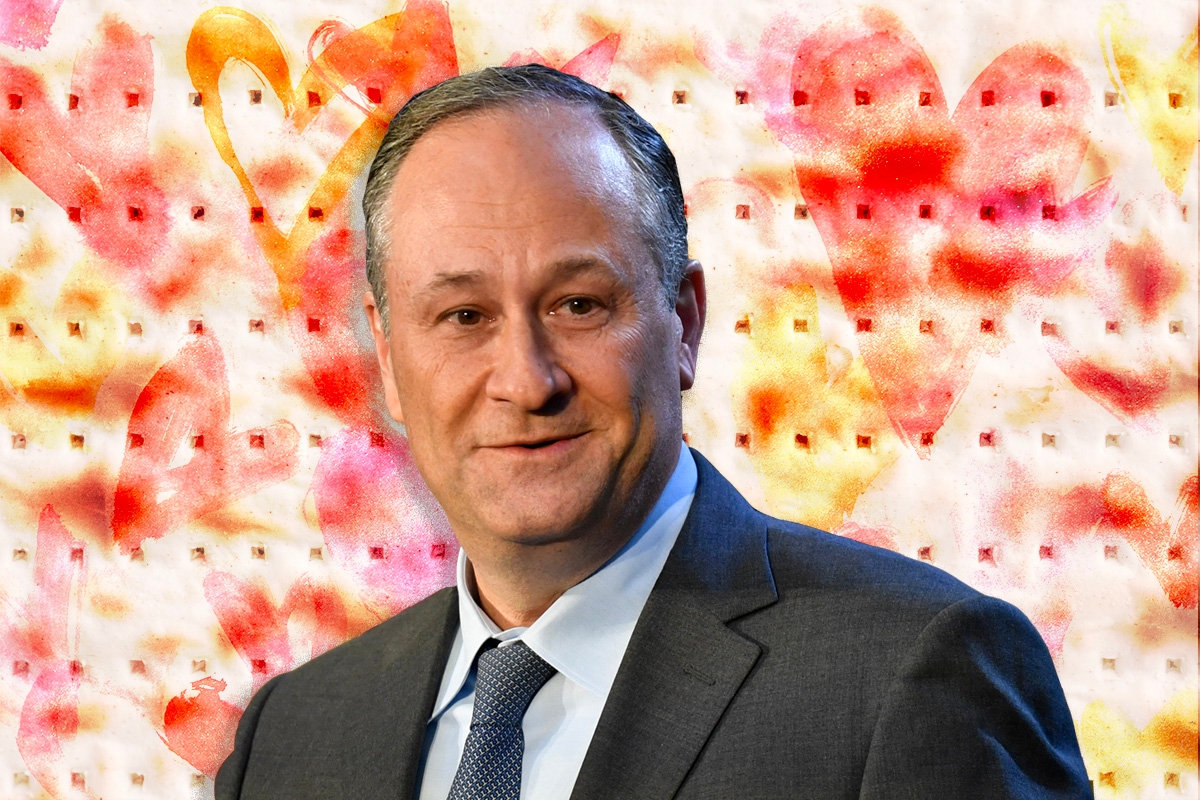 Just when I thought I couldn’t love Jewish dad Doug Emhoff more, the first ever second gentleman of the United States goes and proves me wrong — this time, by baking homemade matzah.

Emhoff was at Milton Gottesman Jewish Day School in northwest D.C. this Wednesday to talk to students and try his hand at making the Passover staple at a makeshift matzah-baking station outside the school.

The photos from this endeavor are just so winning. You can see Emhoff, wearing his usual dress shirt and kicks, with a group of fourth-graders from the school as they mix flour and water, poke holes into matzah with a fork (Emhoff’s grip looks intense) and then cook it atop a metal-covered fire pit.

Counted down the days until Passover in the best way with students from Milton Gottesman Jewish Day School.

From making matzah with the fourth grade to talking about the importance of Passover traditions with the eighth grade, it was a great day. pic.twitter.com/KQ9wcA46lk

Emhoff was apparently a little nervous about his hole poking skills — “they didn’t brief me on the pattern of the holes!” he exclaimed.

Some of the kids look very invested in the task — one child, wearing a Pikachu shirt and donning a kippah, looks particularly tense as Emhoff drops his creation on the fire pit. It’s so, so adorable.

As for the results, while Politico reporter Sam Stein disagreed with Emhoff’s assessment, the father of two exclaimed that the flat bread (which he was briefed not to taste, but did anyway) was “awesome” and “really good.” I know homemade matzah (or, let’s face it, any kind of matzah) isn’t for everyone, but I’m going to wear my rose-tinted, matzah-loving glasses and choose to take Emhoff’s side on this one.

Emhoff also talked to Stein, and to the students, about the historical nature of his role from a Jewish perspective: “I went in anticipating: ‘Who is going to care that I’m Jewish?’ I didn’t expect to feel the way I felt about being in this role,” he told the reporter.

“Being an entertainment lawyer in Hollywood you’re kind of like, ‘Wow, wait, everyone is not Jewish?’” he explained.

Emhoff has had some amazing Jewish firsts since beginning his role, and it’s clear that he’s found them just as moving as others have — from affixing the first mezuzah in the Naval Observatory, the vice presidential residence, to being the first Jewish person to host the White House Hanukkah party.

“I was reflecting, 40 something years ago, if I was in this assembly and you told me there was going to be a Jew married to the vice president, I would have said, ‘There’s no way. There is just no way,’” he conceded to Stein.

Emhoff apparently also regaled students with stories from his family’s seders, lamenting that he never got to ask the Four Questions because he’s a middle child, and kvetching about his grandmother’s overcooked brisket. Emhoff discussed the Passover story with eighth graders at the school, of which he said that “the reflections they shared were wise beyond their years.”

If you too want to make matzah like the second gentleman, you can watch an adorable video of him making it below, or follow our easy recipe here. If Doug can do it, so can you!

Emhoff also helped host “The People’s Seder,” the White House’s virtual Passover celebration, this year, where he talked about his love for gefilte fish and the importance and universality of the story of Exodus. “It’s a story that makes me think of people facing war and conflict in communities around the world, including the communities of the Ukraine,” he said. You can view the seder here.

Happy Passover to our favorite (and only) second gentleman! Thank you for always sharing the Jewish pride with us.

I made some matzah with fourth graders and wanted to share the recipe.