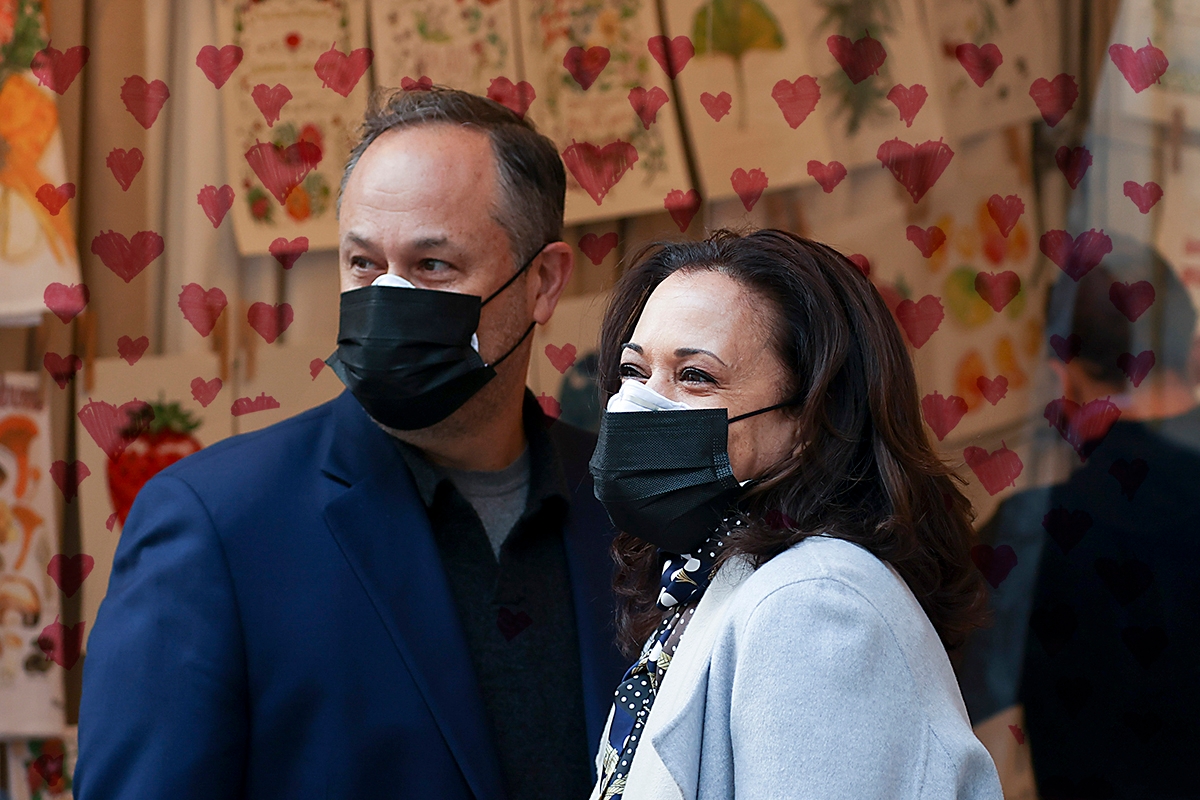 Today’s inauguration is a historic day for our nation in so many moving ways. But as a Jewish mother and spouse, there is one historic first that I find particularly and personally touching: Douglas Emhoff is now the first-ever Second Gentleman. He is also the first Jewish person to make it into the “first quartet,” if you will — no American president, vice president, or any of their respective spouses have ever been Jewish. (Previously, the closest a Jewish person has ever been was in 2000, when Democratic presidential candidate Al Gore chose Joe Lieberman as his running mate.)

Emhoff is also, as many people have pointed out — including his two kids, Ella and Cole —  really darn adorable. The way he looks at his wife, Vice President Kamala Harris — or, rather, the way they look at each other — is absolutely dreamy. He’s been her champion throughout this long road, both as a potential presidential candidate and then as VP candidate.

The couple made the mutual decision to put Emhoff’s successful career as an entertainment lawyer on the back burner. “This was about something bigger than either of us,” Emhoff wrote in GQ on the eve (or erev, if you will) of the inauguration.

One more first about this election:

A Jewish spouse, Doug Emhoff, will accompany his wife into the White House.

This is a real first for Jewish Americans and a heartwarming rebuke of rising Antisemitism.

Yes, we have a lot of successful Jewish politicians in this country, on both sides of the aisle — in fact, two of them even ran for president this primary season. So, I know that for some of us, it may be a disappointment that the first Jewish person to reach the White House (well, technically the Naval Observatory) is a Jewish spouse.

But I am here to argue that Emhoff is an amazing, groundbreaking role model — and a beacon for all Jewish men (and women and everyone on the gender spectrum). He’s a model of what non-toxic masculinity looks like and what a supportive spouse looks like. Here’s a man who doesn’t just stand behind his woman — he actively works to elevate her.

Before we get to Emhoff, it should be noted that his achievement very obviously pales in comparison to the history made by his wife, who has accomplished a long list of firsts. Among them, Harris was the first woman and first Black person elected as District Attorney of San Francisco. She was also the first woman, the first Black person, the first person of Southeast Asian descent to be AG of California — and now, the first of all of these to become a VP in our nation’s long long history of white, male vice presidents. There will now be an entire generation of kids — including my son — for whom having a woman or a PoC in the VP office is nothing out of the ordinary, and that should bring us all joy.

While Emhoff’s achievement isn’t one of the same magnitude, he’s made history nonetheless. He is also a kind of Jewish man that seems familiar to so many of us: I see in him my father, my husband, my brothers — all men who do not care for petty fights about machoism. These are men who are kind and warm and do not see sensitivity as a flaw. I see him represented in countless Jewish American families across this nation: dual-income households in which Jewish women are demonstrating that their careers and dreams are as important as those of their spouses (and can even take precedence sometimes).

I see in him as part of a legacy of Jewish men who have stood behind their women as their careers took off, most iconically Ruth Bader Ginsburg’s husband, Martin Ginsburg, bragged about her successes and actively lobbied for her to secure her Supreme Court nomination. Then there are Jewish celebrities like Jerry Stiller and Mel Brooks, who may have been as successful or more successful than their wives, but always looked at their loved ones with doe-eyed admiration.

Much of the internet has rejoiced at Emhoff’s supportive-spouse role during the months after the election. Some Jewish men proudly announced that they, too, were married to more successful women, and they were thrilled to have representation in the highest office of the land.

ALSO. SHOUT OUT TO MEN WHO TRULY SUPPORT THEIR WIVES AND FEMALE PARTNERS IN THEIR DREAMS AND AMBITIONS

THERE NEED TO BE MORE OF Y'ALL FR

Jewish husbands of more impressive women – this is our moment

“I think it’s great that the most prominent Jew in the White House will be a man like Doug Emhoff, who is successful in his own right, by his own merits, and who takes a back seat to his more prominent wife,” Ben Hartman, a Jewish writer whose tweet about Emhoff went viral in late 2020, told me.

I also think about how Emhoff talks kindly about his own Jewish mother, Barbara. The stereotype of Jewish men having fraught relationships with their overbearing moms is a gendered, outdated trope that’s veiled with misogyny. It is one that we then often see manifest itself in other relationships such men have with women — especially with Jewish women — in their attempt to date and wed a person who is lightyears away from their strong, demanding Jewish mothers.

But Emhoff embodies another dynamic entirely. In a recent interview with his two kids for Glamour, he talks about Barb — whom Harris imitates remarkably well — in a way that is so refreshing: “I love being surrounded by strong women. I’m glad to have had a strong mother,” Emhoff said. “She’s got what we call street smarts, but she’s also so intelligent. It’s just all I knew. When I got older, it made sense that I would want to continue to be around smart, powerful women. But also women who are funny and compassionate and actually want to do good in the world. People talk about it like it’s something unique or a big deal, but I think, well, everyone should want to know strong women and support them.”

Emhoff also recounted how Harris believes Barb is very similar to her own mother, Shyamala Gopalan Harris, a biomedical scientist who passed away in 2009. In the blended Harris-Emhoff family — which also includes Emhoff’s mutually supportive ex-wife, Kerstin Mackin, along with Harris’ sister, Maya, her husband, and her niece, Meena Harris, and her daughters — strong, opinionated women reign supreme.

Just a few weeks ago, on Hanukkah, Harris and Emhoff shared why the holiday means so much to their family — the video was so heartwarming in its simple authenticity.  Hopefully, we will see this beautiful, blended Jewish family do more Jewish things together in the next four years, showing everyone what Jewish families can look like.

In his article for GQ, Emhoff wrote about seeing this moment “through the eyes of our kids, Cole and Ella, each of whom are coming into their own as young adults.”

He wrote: “I want them to grow up in a world where it isn’t news that a loving partner —of any gender — supports them in everything they do.”

This example — of Jewish diversity, and of love and support — is an admirable, historic, and deeply meaningful one for all our children to witness from the person who will be the highest-profile Jewish man in this country in the next four years. Emhoff also aspires to live by the words that Harris’ mother used to say to her own daughters: “You may be the first, but you better not be the last.”

Given the joy, determination, and thoughtfulness that Emhoff is already infusing into his unprecedented role, I firmly believe that he will inspire many boys, men, and partners of all identities to follow in his lead. May this be the beginning of a long, beautiful legacy.

My son gets to grow up knowing the kind of masculinity that President Elect Joe Biden and SECOND GENTLEMAN Doug Emhoff project, the kind of love they are comfortable sharing makes me full of joy.