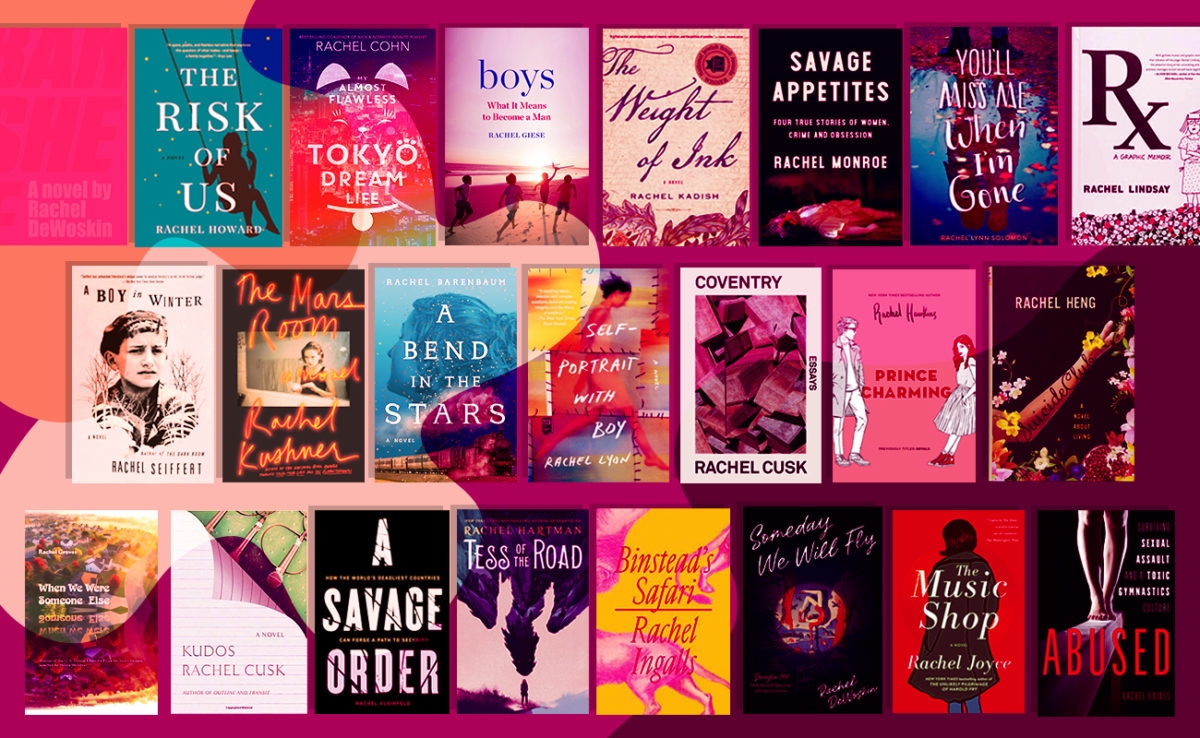 Rachel, as we all know, is an über-popular name, especially among Jews. Rachels are everywhere you look! Aside from your inbox — and ours — there’s Rachel from Friends, Rachel Zane from Suits (played by future Duchess Meghan Markle, whose first name is actually — you guessed it — Rachel), Rachel Berry on Glee, and so many more. There’s actresses Rachel Bloom, Rachel Weisz, Rachel McAdams, Rachel Bilson… should we keep going?

But there’s one more place where we’ve recently noticed a lot of Rachels: our bookshelves. These days, a host of authors named Rachel are making waves — with really, really good books. (Side note: Not all of these Rachels are Jewish, but some are.)

So, without further ado, here’s one of the more ridiculous lists we’ve published on Kveller: books we love by authors named Rachel. We’ve split it up into four categories: fiction, nonfiction, young adult, and coming soon. Since this list could really go on forever, we limited ourselves to 2018 and 2019 (with a few books published in 2017 sprinkled in, we couldn’t resist). There’s something for everyone, so enjoy!

The story of a woman in prison, a novel “so powerful and realistic you come away convinced that all… escapes are illusory, and that even for those who get out, prison is still a life sentence.”

A young photographer accidentally photographs a boy falling to his death, “an image that could jumpstart her career, but would also devastate her most intimate friendship.”

OK, this was originally published in 1983, but it was re-issued in 2019, so it counts. It is “a feminist, fabulist, magical realist romance set in London and Africa.”

National Jewish Book Award-winning historical fiction set in London — in the the 1660s and the early 2000s — tells the tale of two women: Esther, a scribe for a blind rabbi, and Helen, a Jewish historian.

A love story set in 1988 in a record shop in a suburb, focused on the healing power of music.

Taking place over the course of three days in a Ukrainian town in 1941, this book tells the tale of one town’s experience of the Holocaust. The story reflects true wartime accounts; with this novel, Seiffert “unleashed literature’s unique power to analyze history’s scroll, to let fiction judge.”

A conclusion to the trilogy that began with Outline. “As trilogies of recent vintage go, these books…strike me as a stark, modern, adamantine new skyscraper on the literary horizon,” The New York Times writes.

A dystopian story set in a future NYC where people are given the chance to live forever. The novel “takes the moral and cultural imperatives around wellness and turns them into commands of the state.”

Want to learn about today’s “boy crisis” and the culture of toxic masculinity (i.e. “boys don’t cry,” “man up”)? This book — drawing upon research and interviews with educators, parents, sociologists, and more — is for you.

11. A Savage Order: How the World’s Deadliest Countries Can Forge a Path to Security — Rachel Kleinfeld (November 2018)

Kleinfeld looks at how “extreme violence can cripple democracies.” In countries around the world, she interviewed generals, former guerrillas, activists, politicians, mobsters, and law enforcement to understand how societies deal with ingrained violence.

A graphic memoir about the treatment of mental illness. Lindsay, diagnosed with bipolar disorder in her early 20s, takes a job in advertising. When she gets placed on the team developing ads for an antidepressant drug, she begins to destabilize. The memoir charts this and her hospitalization.

Jewish twins Adina and Tovah navigate identity, love, going to college, and results from a genetic test that could change their future.

From the author of Nick and Norah’s Infinite Playlist, a story about a foster kid who travels to Japan to find her long-last father.

It’s 1940 and Lillia, 15, flees World War II with her father and sister to Shanghai. As Kirkus points out, this young adult novel “explores a rarely depicted topic: the struggles of the Shanghai Jewish refugees.”

Set in a medieval kingdom and hailed as an “exquisite fantasy for the #MeToo movement,” the story follows Tess, a young girl who runs away from a nunnery. There are dragons, if you’re into that.

A 16-year-old girl from Florida has an older sister who is about to be engaged to the Crown Prince of Scotland. “Princess Diaries turned-upside-down.”

We’re very excited for this: Cusk is following up her Outline trilogy with essays on family, gender, politics, and various writers.

A dive into our cultural fascination with true crime, looking at four crime archetypes (Detective, Victim, Defender, and Killer) and four true stories.

The story of a young Jewish physicist in 1914 Russia; it explores the lives of Russian Jews during WWI and of the effort to prove Einstein’s theory of relativity.

The plot: “A couple fosters a 7-year-old girl in hopes of adopting her, but trauma in the girl’s past makes her future with the new family unclear.” A deep dive into the foster-care system and caring for kids with traumatic pasts.

The protagonist learns she has breast cancer, and then “ruins her own life.” A look at a catastrophic mid-life crisis.

The heartbreaking tale of one of the gymnasts abused by Larry Nasser.