The death doula entered the dreary hospital room wearing a striking white and midnight-blue polka dot satin dress. She was incredibly fashionable and the total opposite of what I expected someone to wear who helps loved ones let go. It was certainly the opposite of the sterile, white lab coats that dulled every other person who came and went from my sister’s room. The polka dot dress was not going to be ignored.

If Susie was not in an end-of-life coma, she would have adored that outfit, asked the doula a million questions about it, and immediately loved and respected her. It was so fitting that the chic death doula should be there to help Susie transition. Susie would only go out in style. Fashion was the thread in her life.

Susie’s sense of style was always clear, focused and uniquely her own for as long as I could remember. In 1970, while all the other high school girls in New Mexico wore long braids, Mexican wedding shirts, embroidered jeans and leather boots, my sister did her own thing. She avoided braids and the famous Jackie O-inspired short, middle-parted, straight bobs. While every other girl wore peasant muslin gauze, she donned starched white button-down blouses. Rather than wearing moccasins or Dingo boots to fit the fad, she wore black and white saddle shoes to school, a throwback of several generations. Her dress was a daily offering to her signature statement of nonconformity.

Susie did her best model pivot to turn away from every trend that came her way. Hip-hugging-belly-exposing jeans? Not a chance. Her pants were always ironed at the creases. She loved everything monogrammed, from her purses to her stationery. On her SB letterhead, she would sign off with her iconic Xs and Os, like the top fashion moguls with panache.

Susie’s friends told her she was born a decade too late and yet, somehow, they deemed her ahead of her time. She was retro before retro was even a thing, perhaps future-retro. When everyone else raced to get their driver’s license, Susie would not dare drive and give up the opportunity to strut in her saddle shoes no matter how far the distance. Susie was different in every way. The phrase “cut from her own cloth” seemed custom-made for her.

As she grew, she adopted a sophisticated professional look and embraced her power. She was not a firebrand feminist marching for causes or burning her bra. Her force showed itself more through her actions than her words. She runway strutted her way to the top of the traditionally male-run fashion industry in her power suits. She was a role model as a fashion model. Her clothes espoused the firm belief in equal pay for equal work and that women should be paid the same and treated just as seriously as men.

When she got engaged to Robert, Susie searched for a wedding dress that expressed the many sides of her ever-evolving personal couture. She wanted to blend her New York City independent professional role, her Conservative Jewish background and her New Mexican roots. How could one dress express such a diverse trifecta? It was a tall order, for sure.

Eventually, she found the perfect wedding gown at a vintage Soho boutique: a creamy silk Edwardian cropped blouse with a high neckline, long puffy sleeves, and matching fabric buttons running down the back. She could have been getting married in the 1800s! As a fusion of an early suffragette and southern debutante, it was a natural fit. It was the type of wedding dress that would be considered a rebellious style in the drawing rooms of the first wave of Seneca Falls. That was our ever-original Susie, wildly embracing both antiquated and powerful sentiments as if they were made for each other. 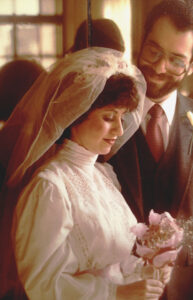 Courtesy of the author

Lo and behold, the dress’s skirt could have been considered a “hippie skirt;” the same style she turned away from when it was faddish in high school was finally worthy of her attention. She belted the embroidered top and the lacy skirt with an antique pink satin sash wrapped around her waist and tied in the back. Susie sashayed down the aisle in sturdy white linen pumps.

Days before Susie slipped into a coma, she lay in her hospital bed with stiff bleached sheets wrapped in a blue paper gown tied in the back. The whole scenario was very off-script. “Annie,” Susie said, “I have something to ask you.” In a delirium state, her voice was barely a whisper. “I need you to buy me a blue gingham dress.” She said, “I am going to a party and want a particular outfit. It has to be a blue gingham. I need it as soon as possible.” She told me she knew I would know exactly where to find it. I had no idea.

Minutes later, as if on cue, her daughter, Rebecca, arrived with an Old Navy bag. When Susie saw the dress inside, she woke up from the haze of her illness and the potent drugs. Becca and I put the new blue knit jersey on Susie and instantly she sprang to life. The dress symbolized all of the independence, freedom and personal fashion tastes Susie wore throughout her life. At that moment, Susie looked as excited as she did the day of her Carlisle Hotel wedding.

The garment worked another kind of magic as well — it helped the doctors and hospital staff see the honest Susie. After that day, they treated her like a three-dimensional person, not just another patient with a debilitating illness in their care. Two days later, the Chevra Kadisha, the Jewish burial society, lovingly dressed Susie’s body in her final outfit, muslin and linen. She loved wearing linen. Then the Chevra Kadisha stayed up all night, chanting Hebrew prayers before we said our final goodbyes with our own Xs and Os.

One year later, Susie’s daughter got married. She repurposed her mother’s wedding dress for her rehearsal dinner, transforming it from her mother’s successful trifecta into her own contemporary masterpiece. The next day she walked down the aisle in a Monique Lhuillier gown. The gown’s interior was lined with Susie’s notes and memories sewn inside. Susie’s name was affixed to the gown, as it should be, like the fashion icon she was. Some may think fashion is a shallow and disposable indulgence. For Susie, it was her superpower.